Will Nazara Technologies’ IPO Push The Company Into God Mode In The Indian Gaming Industry?

Will Nazara Technologies’ IPO Push The Company Into God Mode In The Indian Gaming Industry?

• Nazara Technologies is expected to raise $142 Mn from IPO, with a valuation of $500 Mn post IPO
• Lead investor WestBridge Capital will make a partial exit, earning 75-80X return on its 12-year-old investment
• The Indian gaming Industry is expected to hit $1.1 Bn by 2020; India sees the second-highest game downloads globally

The Indian startup ecosystem — the third-largest home to startups in the world — is showing signs of maturity, with startups coming of age, providing high-value exits to investors and launching initial public offerings (IPO). While 2017 proved to be a blockbuster year with a record 122 companies raising a staggering $10.85 Bn through IPOs, 2018 is witnessing even greater highs. Overall, H1 18 India IPO activity was at a comparably higher level and saw 90 IPOs raise US$3.9 Bn, driven by solid activity in Q1 18, according to an EY India report.

While, so far, the IPOs have been primarily concentrated in sectors such as insurance, non-banking financial companies (NBFCs), construction, consumer and technology, India’s budding industry — online gaming — is now set to witness its first-ever IPO with Nazara Technologies set to go public later this year.

Nazara Technologies is expected to raise $142 Mn (INR 1000 Cr) from its IPO. While the IPO will shoot up Nazara’s valuation to around $500 Mn, one of the investors, WestBridge Capital, is expected to get a whopping 75-80X return on its partial exit.

Speaking to Inc42, Nazara Technologies managing director Nitish Mittersain says, “The market has grown now. In the last two years, we have witnessed some accelerated growth in the market. And, now going for IPO is, I think, the natural evolution for the company.”

The Mumbai-based company is backed by WestBridge Capital, Turtle Entertainment, and Sequoia Capital.

According to EY India’s IPO Readiness Survey Report, in H1 18, India recorded the highest IPO activity in terms of the number of deals across the globe, accounting for 16% of the total issues.

“This was 27% and 28% higher than 1H17 activity in terms of number of deals and proceeds, respectively, as companies tried to take advantage of the liquidity in the markets on the back of a solid 2017,” says the EY India report.

While Nazara plans to leverage cutting-edge technologies such as artificial intelligence (AI) in its games and deepen its penetration in developing countries, are there any specific plans after the IPO fundraise? Mittersain clarifies, “The company has already set a timeframe and growth plan to follow. We don’t have any pre-IPO or post-IPO plan as such. What we want is to build a large gaming ecosystem and we have been continuously building it organically, internally as well as through multiple investors.”

Nazara is the publisher of some of the most popular Indian games such as Chhota Bheem Speed Racing and Motu Patlu game. It claims that its subscription services are accessed by 130.43 Mn monthly visitors from 61 countries including India and emerging markets in the Middle-East, Latin America, and Africa. It claims to have over 4.08 Mn paid users.

Over the last 20 years, Nazara hasn’t only developed mobile-oriented gaming content but has also invested in a series of related startups to build a gaming ecosystem in India and across developing countries.

The Journey Of Indian Gaming Starts With Nazara

Founded by Nitish Mittersain way back in 2000, Nazara Technologies is one of the first companies that hit upon the idea of gaming as a business in India. This followed by the advent of a number of gaming companies — Games2win, Maujmobile, Ace2three, Rummycircle, and Zapak — in mid 2000.

Back at a time when mobile phones, Internet connectivity, and PCs were the ideograms of opulence and their availability was limited only to a few cities, it couldn’t have been easy to ideate and build a gaming a company. So what got Nazara started in this game?

Mittersain explains that he started Nazara while he was still studying in college.

“I have been a gamer all my life. I coded my first game using basic language when I was seven years old. While studying, I saw my college friends talk about gaming. This gave me a sense that gaming, sometime in future, might become a large opportunity in our country,” says Mittersain.

However, he accepts that Nazara was way ahead of its time. This was a time when even mobile wasn’t there, leave alone smartphone, he says. Internet users were a handful and there was poor and limited data connectivity. “I think those were the big challenges. But, then came mobiles and their further evolution to smartphones. You now got fairly good gaming devices in everyone’s hands. I think there’s been a huge change over the years. And, I think that’s what drives the gaming experience and revolution in the country.”

While the country is home to the world’s second largest number of smartphone users, Jio penetrating deeper into rural areas has amplified the scope for gaming in India.

According to Newzoo, a gaming data forecast company, “There are more than 2.3 Bn active gamers in the world this year, of which 46%, or 1.1 Bn, spend money on games. The games market will reach $137.9 Bn in 2018, with digital revenues accounting for 91% of the market, or $125.3 Bn. For the first time, mobile gaming will contribute more than half of all revenues, with smartphone and tablet gaming growing +25.5% year on year to $70.3 Bn.”

This is surely a good sign for the Indian gaming industry, as India has the second largest mobile phone users in the world. 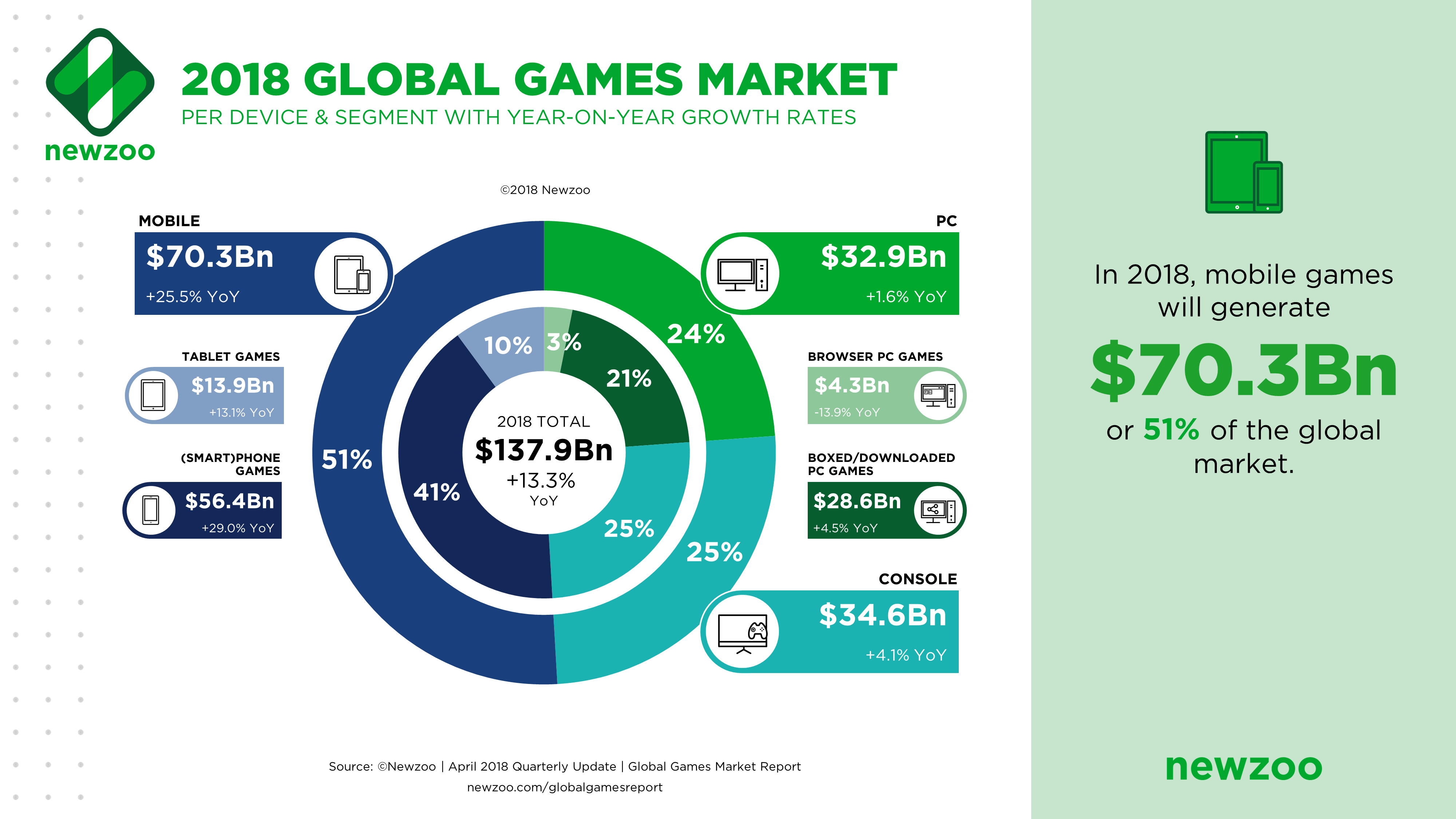 However, as per another Newzoo report, as far as revenues and market capital are concerned, the gaming industry is actually dictated by the US and China. India, with a less-than $1 Bn market valuation, hardly comes into the picture. While China’s gaming market has reportedly crossed $30 Bn, the US ($24 Bn) is second, behind China.

“If you see data-wise, the second-highest game downloads globally is happening in India. So from that extent, I won’t say that India is far behind in the world. Yes, from the monetisation point of view, India is far behind,” says Mittersain.

Indian consumers largely opt for the Free-To-Play (F2P) model of gaming services and most gamers might be playing for the first time on mobile. “Indian consumers are very casual in nature unlike the evolved gamers in the US and China who have played online games, multi-peer games, and advanced games. Therefore, the opportunity for monetisation is lower here. But, users here too are evolving now and the monetisation will soon catch up,” believes Mittersain.

Besides Nazara technologies, the Indian gaming industry has also attracted big players such as Alibaba backed-Paytm, Tencent, and Chinese Youzu.

India’s digital gaming industry has already crossed $890 Mn and is expected to hit $1.1 Bn by 2020, according to a Nasscom report. The number of gaming startups in the country has gone up from 25 in 2010 to more than 250 now, and almost two new startups are coming up almost every month, the report added.

In the last few years, big international players have descended upon the Indian gaming scene and Indian companies have started up in the space. The old monk of the industry, Nazara Technologies, has been working on a number of fronts to maintain its lead in the game not just in India but across the developing countries market.

At present, Nazara Technologies is tinkering with AI to make its games more interactive and immersive. “We are looking at how some of our games, such as our cricket, can be integrated with AI. Soon, the technology will be integrated into other games as well,” says Mittersain.

Apart from stepping up technology integration, Nazara has been on a spree to acquire and invest in gaming-related startups. In February, the company also attracted investments from ESL (Electronic Sports League), the world’s largest esports company.

Interestingly, ESL has signed a license agreement with NODWIN Gaming, acquired by Nazara Technologies. As part of this agreement, NODWIN Gaming has secured multi-year exclusive licensing rights for the ESL system and its community platform to organise and operate ESL competitions in India. NODWIN Gaming has also secured media distribution rights of ESL’s global content to local linear and digital platforms in the Indian subcontinent.

In January, Nazara acquired a majority stake in NextWave Multimedia to strengthen its portfolio of offerings in the virtual interactive sports genre in India and in other emerging markets. The NextWave acquisition comes after Nazara’s investments in startups such as MasterMind Sports, Truly Social, Moong Labs, and, more recently, HalaPlay.

Mittersain is highly optimistic about the future, both for Nazara and for the digital gaming industry in India. “This is a growing market so there’s enough space for everybody,” he says.

In line with its strategy to bolster the gaming ecosystem across India and the emerging markets, Nazara has been proactively investing in startups. “We are continuously looking for startups in the gaming sector whom we can partner with and work together in this larger opportunity,” he adds.

Nazara Technologies’ emphasis is on building the gaming ecosystem in India. “Whichever company helps in that aspiration, we are more happy to invest in it. Something that is innovative, tech-savvy, and bringa a larger perspective to the gaming industry…” concludes Mittersain.

He is right. The Indian gaming industry is only set to get more exciting in the next few years, and is giving goosebumps to investors and startuppers alike. Nelson Rodriguez, global director of Media Industry Strategy at Akamai Technologies, says, “We think there will be 300 Mn new players (users) in India over the next couple of years, and after China, India’s going to be the second biggest market. But, the Chinese market is a closed market — and not just legally. I mean, Chinese consumers historically only consume Chinese or Korean games. But India is a market that is open to consuming global gaming content.”

He adds that it will be interesting to see how this space develops — whether Indian consumers will prefer to play international games such as PUBG and Fortnite or will local games capture their imagination, given the popularity of live trivia games not only in India but across Asia.

“In either case, with a 500 Mn players’ market, India has the potential to build its own League Of Legends,” adds Rodriguez.

Back to Nazara. With the Nazara Technologies IPO, for which ICICI Securities and Edelweiss Financial Services have been roped in, the Indian digital gaming industry’s game is all set to enter Level II.

Who will be next — Reliance’s Zapak? The game is on.