Startups Vs Downturn – Indian Startup Funding Plunges 53% In May To $1.6 Bn

During the month, the startup ecosystem saw seven mega deals, with the biggest deal being Zepto’s $200 Mn funding round

The year 2022 is almost halfway through, and with the end of May 2022, a worrying downward trend has emerged within the Indian startup ecosystem.

Towards the end of 2021, the startup ecosystem saw a great boost in funding activity, with the last three months seeing $14.4 Bn in funding, more than a third of the total $42 Bn funding raised during the year.

This momentum continued during the first quarter of 2022, with $11.7 Bn in funding raised. However, ever since April, Indian startup funding has started to decline, with May being the second month in a row to record a downturn in funding. The Indian startups raised $1.6 Bn in funding, a 53% decline month-on-month.

Coupled with the downturn in the global markets, the situation has prompted marquee investors such as Sequoia, BEENEXT, KKR and Y Combinator to sound alarm bells.

While Y Combinator has told its startup founders to set their goal to ‘Default Alive’, Sequoia has called this moment in time a ‘crucible moment’, warning founders that there will be no V-shaped recovery for anyone.

Between all of this, May also witnessed history being created for the Indian startup economy. With its $50 Mn funding round, the neobank Open became India’s 100th unicorn. However, it was the only unicorn that the country has seen in two months now when India saw 13 unicorns during the first three months alone.

Amid the undercurrent of uncertainty, here are the funding trends for the month gone by.

Two Months Of Downtick In A Row

While the funding slowed down from December 2021 to January 2022, it was only short term, as February and March saw an uptick in startup funding.

However, April recorded only around $3.4 Bn in funding amount, down from March’s $4.6 Bn. In May, Indian startups only managed to raise $1.6 Bn in funding across 117 deals. 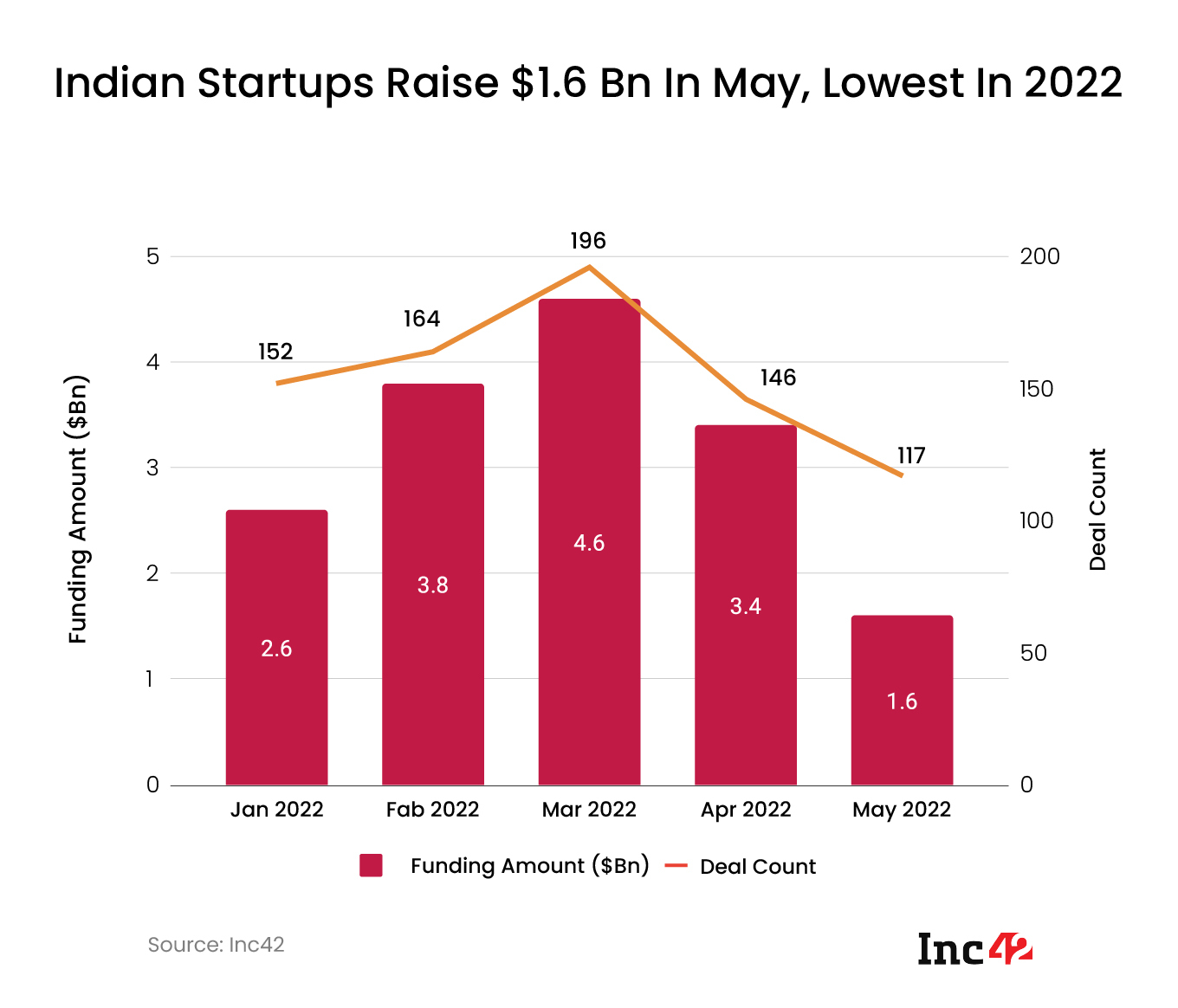 Comparing year on year, however, the story is different. 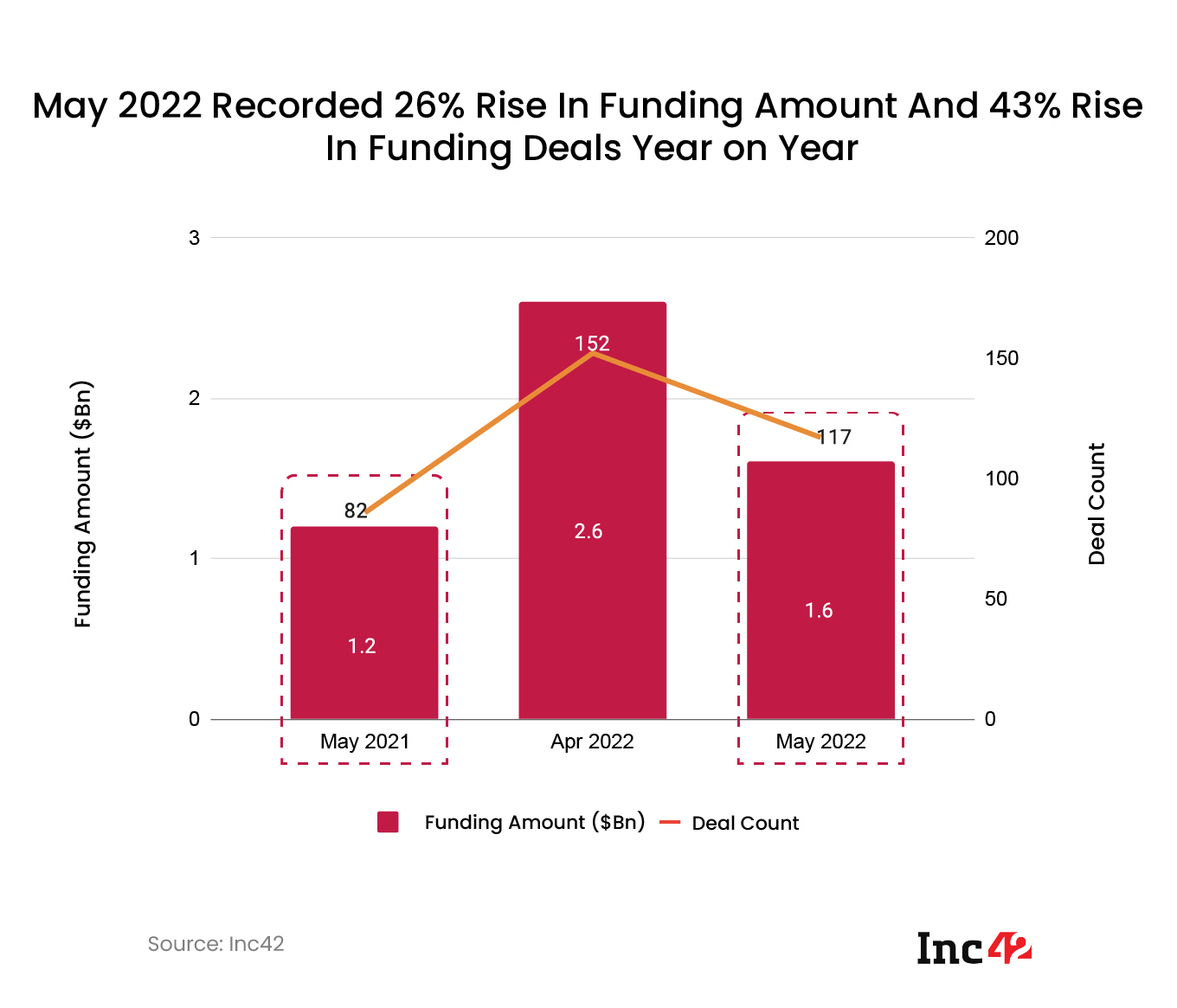 In short, the funding boom India’s startup ecosystem saw in the second half of 2021 has steadily lost steam over the last two months.

During the month gone by, the segment to raise the most funding was ecommece, having raised $430 Mn or almost 27% of the total funding raised in May. 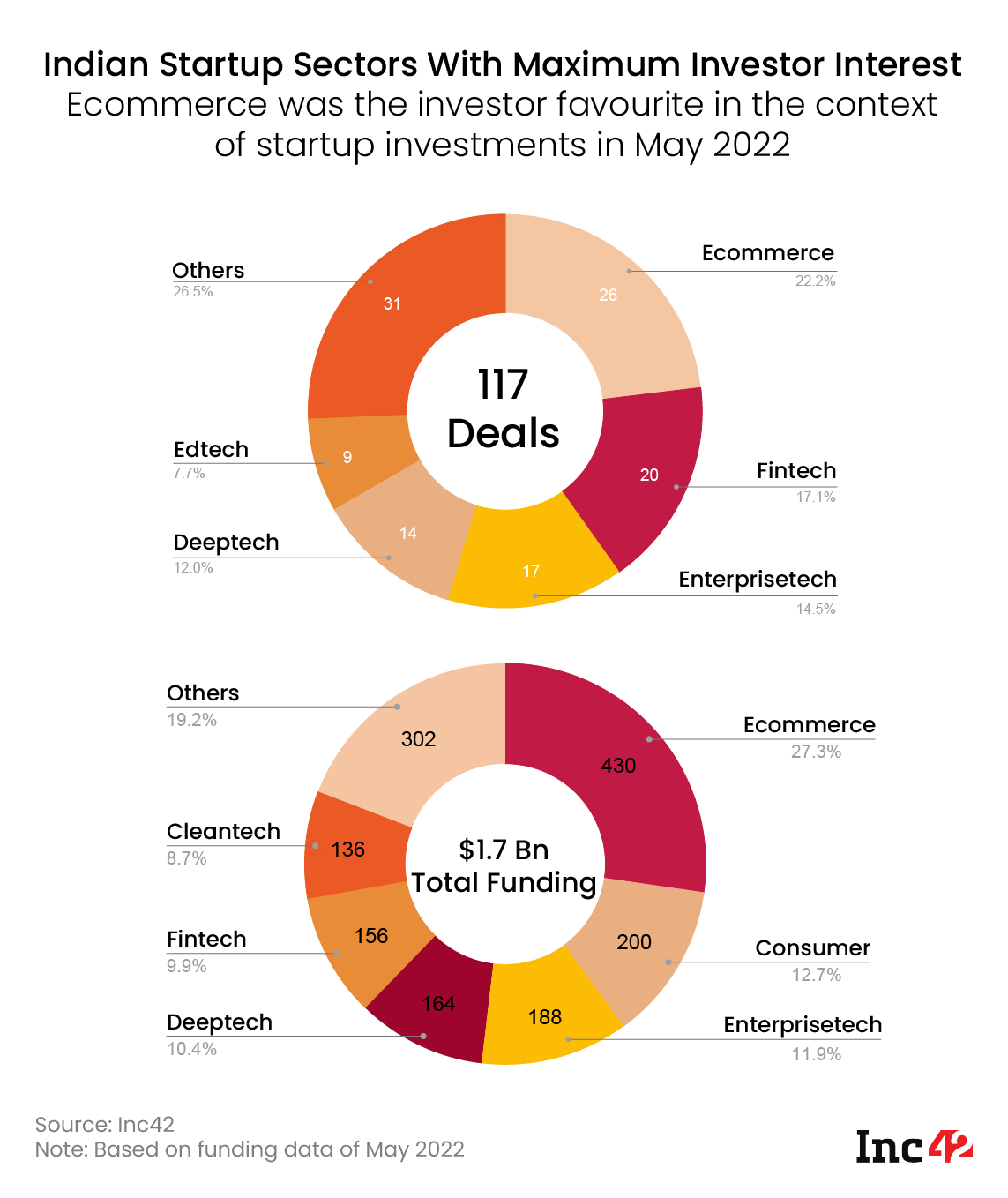 In terms of total funding deals, ecommerce again took the lead, with 27 funding deals happening within the sector in May. Out of the 7 mega deals that happened in May 2022, 3 happened in ecommerce, with Country Delight, Neso Brands and Fashinza raising funding more than $100 Mn.

In terms of stage-wise funding break up, early stage startups have seen the most growth by far in terms of funding raised as compared to last year. 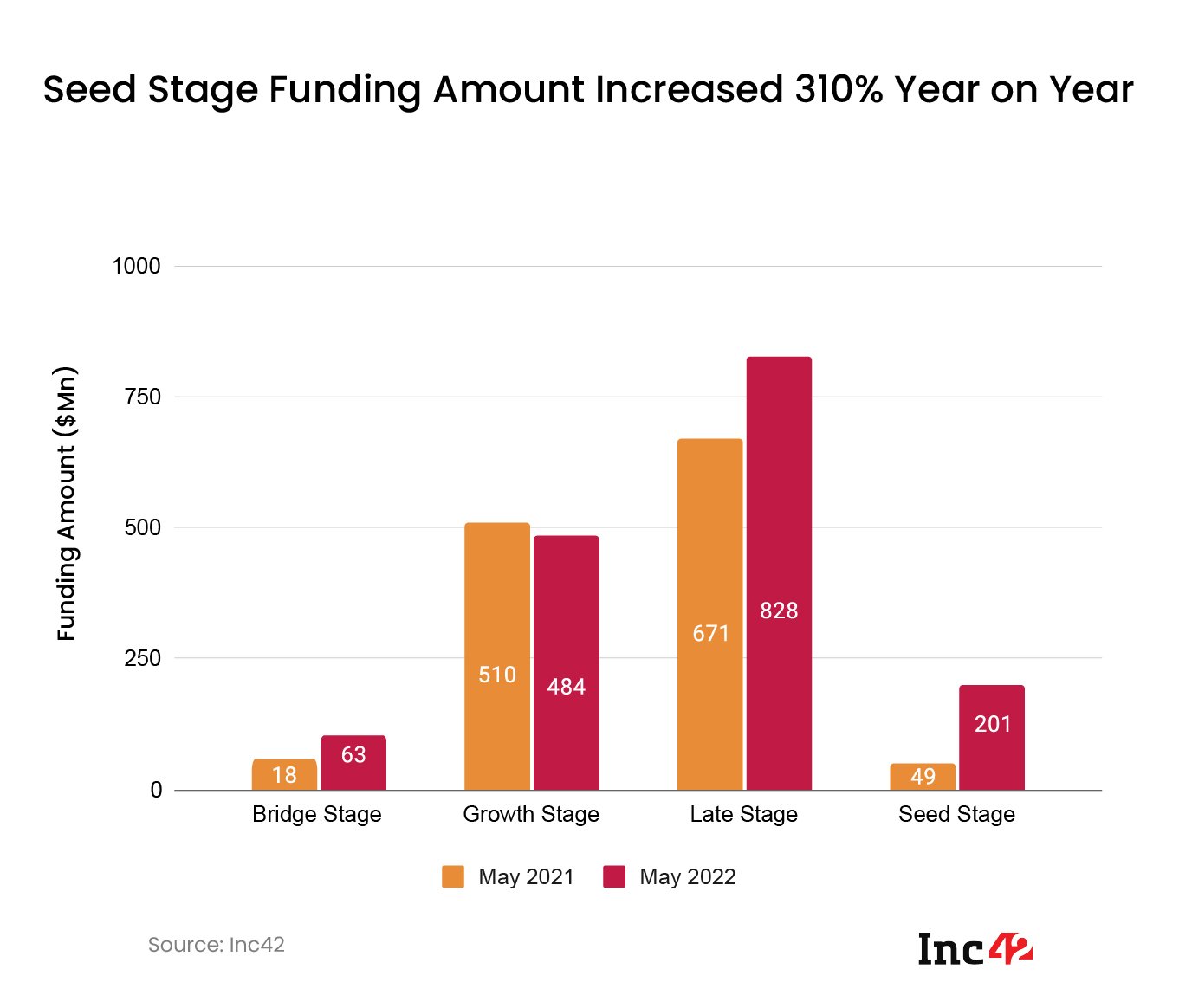 While late stage startups secured the most funding, as is the norm, growth stage funding went down on-year. However, the seed funding during this month is skewed as Neso Brands raised $100 Mn in its seed round.

Seed rounds, which tend to be around a few million dollars, are seldom this big. However, the same patterns become more apparent when the number of funding deals is taken into consideration. 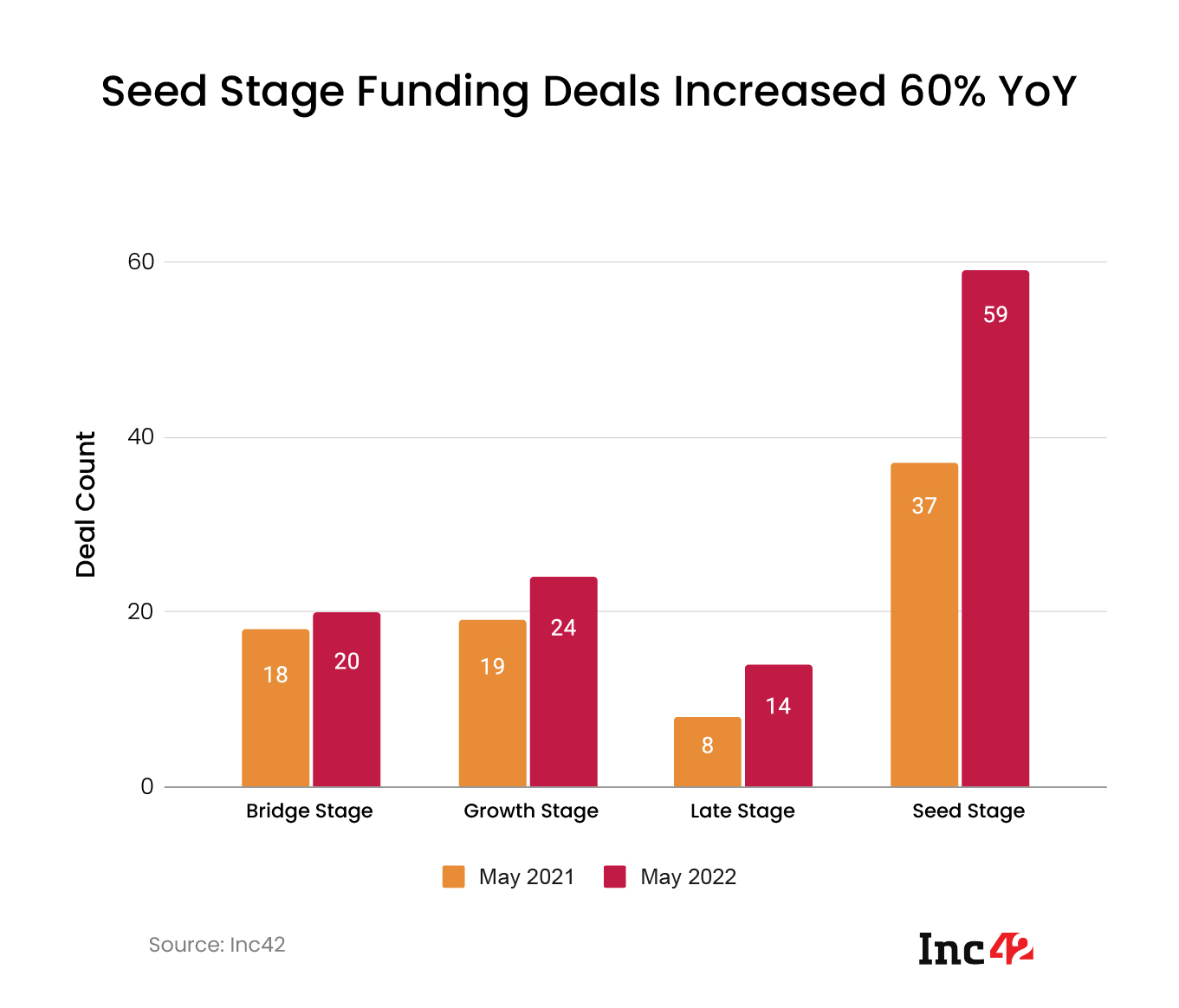 The national capital raised 45% of the total funding raised in May 2022, and it saw 38 funding deals.

Delhi’s triumph over Bengaluru is directly the result of 4 mega deals that happened in May, out of the 7 in the month. Delhi-based GreyOrange, Country Delight, Fashinza and Absolute Foods all raised $100 Mn-plus rounds in the month.

Mumbai finished a close third in both metrics, especially in the funding amount raised. The Maharashtra capital attracted $316 Mn in startup funding, only $4 Mn less than India’s startup capital Bengaluru.

Mumbai’s high finish can be attributed to Zepto’s funding round. The Mumbai-based soonicorn raised $200 Mn in a funding round that has landed the quick commerce startup at the doorstep of India’s unicorn club.

It is clear that with funding drying up at an increasing rate, Indian startups need to find a way to extend their runways by avoiding burning through cash and cutting costs wherever possible.

Some of the startups have started layoffs as a means to cut costs, however. According to Inc42’s Indian Startup Layoff Tracker, 17 startups have laid off 8,899 employees, with potentially more on the way.

If the funding winter is here, how will the startups cope?