Sequoia Warns Of ‘Crucible Moment’; No V-Shaped Recovery For Startups In 2022 Slowdown

Sequoia talked about factors such as inflation, geopolitical crises in Europe, the upheaval in stock markets and private investments that have contributed to the current state of affairs

Like Sequoia, other VCs such as Lightspeed and Y Combinator have also directed startups that growth at all costs is no longer being rewarded by the market

From “R.I.P. Good Times” during The Great Recession in 2008 to the “Black Swan” memo in Covid-hit 2020, Sequoia always has the right words to grab the attention of its portfolio in tough times. And in mid-2022, Sequoia is back with another warning: “Adapting To Endure”.

Admittedly, it doesn’t have the same ominous ring as the previous two major memos by Sequoia, but the 52-deck presentation goes on to talk about a ‘crucible moment’ for startups given the uncertainty and the change in the world today, and the slowdown forcing layoffs and cutbacks at startups.

Amid fears of a looming recession and significant slowdown in funding, startups today are grappling with cutbacks, layoffs and capital constraints, which follows a record-breaking year for Indian startup funding where over $42 Bn was invested, as recorded by Inc42, and over $330 Bn in the US market, as per reports.

In its presentation, Sequoia, which has backed Google, Apple, Zoom, WhatsApp, Instagram and other giants of the modern tech world, talked about inflation, geopolitical crises in Europe, the upheaval in stock markets and private investments — factors that will impact many of its portfolio companies around the world.

According to The Information, which published the presentation in whole, Sequoia sent the slides to 250 founders among its portfolio on May 16, 2022, with Sequoia partners Roelof Botha, Doug Leone, Alfred Lin and Carl Eschenbach taking founders through various sections and leading a Q&A, details of which are not available. 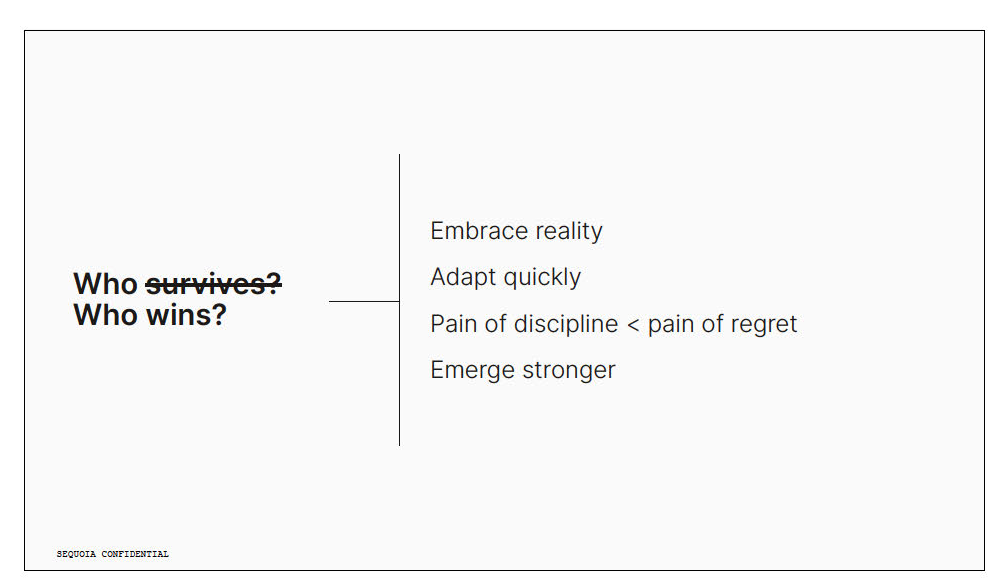 Here are the most pertinent details and the key takeaways from Sequoia’s presentation:

Sequoia believes today’s monetary and fiscal policy tools have made capital costlier and will force cuts among its portfolio and measures for cash conservation. The focus should be on extending the runway and fully examining the business to see where costs are out of control, it added.

“We do not believe that this is going to be another steep correction followed by an equally swift V-shaped recovery like we saw at the outset of the pandemic.”

The VC firm added that founders need to prepare themselves, their teams and their business individually to be ready to take on the challenge of growing in a lean manner. 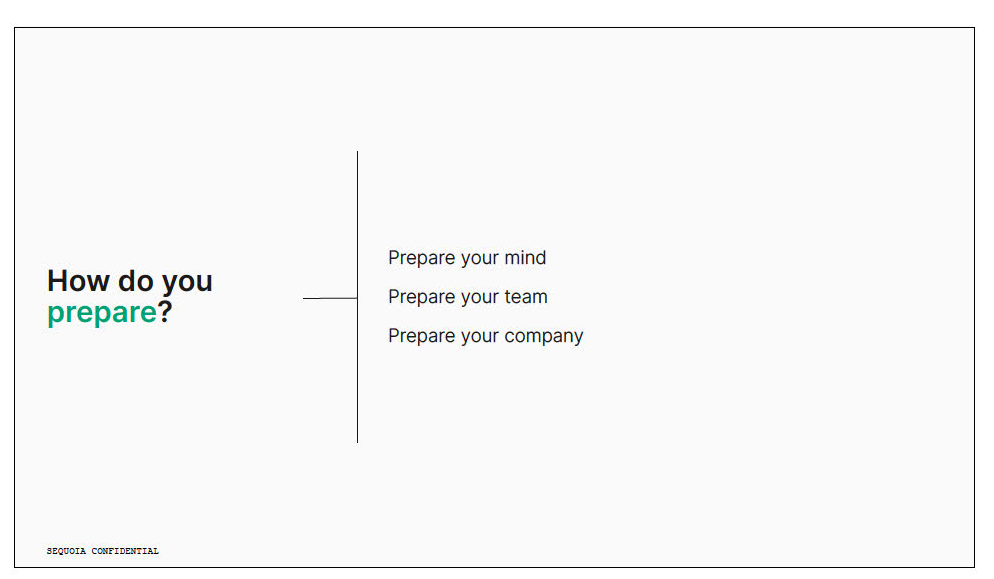 The VC firm expects the downturn to impact consumer behaviour, labour markets, supply chains and more. It also warned founders that this will be a longer recovery than the early days of Covid, and there’s no way to predict how long the slowdown might last.

“The cost of capital has fundamentally increased. Over the past two years, monetary policy loosened to avert an economic disaster in the midst of the pandemic. Negative real interest rates led to effortless fundraising for growth ‘companies and record valuation levels.”

While the easy access to capital and high valuations were seen as rational in 2020 and 2021, given the rising interest rates today, “money is no longer free”, Sequoia added.

The crash in value of the public markets portfolio of many of Sequoia’s key LPs has also made fundraising a challenge for the company. Besides this, the VC firm is dealing with concerns around corporate governance in many of its portfolio companies.

Sequoia has delayed the close of its largest-ever fund for Indian and Southeast Asian startups due to these concerns, but it is also pertinent to note that the slowdown might have had an effect on raising the corpus. At least that’s what Sequoia is indicating when it said that cross-over hedge funds are firefighting the losses in their public portfolio and are less active in private investing.

For its portfolio, Sequoia had one clear directive: Growth at all costs is no longer being rewarded. The focus has shifted from near-term momentum towards current profitability.

“Capital is becoming more expensive while the macro is becoming less certain, leading to investors de-prioritizing and paying up less for growth.”

In fact, many tech startups are already starting to recognise this fact and are shedding employees and parts of their businesses that are not bringing in the returns or which are weighing down unit economics negatively.

Mobility unicorn Ola for instance has laid off 2,100 employees from its dark stores given that this particular segment was not growing as expected for the company. Including these dismissals, over 8000 startup employees have lost their jobs. Besides Ola, unicorns such as Unacademy, Cars24, Meesho, Vedantu, BYJU’S-owned WhiteHat Jr and growth-stage startups such as mFine and Furlenco have also let go of significant numbers.

Sequoia added: “Companies who move the quickest have the most runway and are most likely to avoid the death spiral.”

In light of the crucible moment, in which predicting the future is as difficult as it gets, Sequoia says the biggest thing it can do is advise startups on how to be ready for change. It will host breakout sessions for its early and growth-stage startups on fundraising, business and market forecasting, capital strategy and leadership in crisis.

“Our intention in gathering today is not to be a beacon of gloom. Far from it, we believe the best, most ambitious, most determined of you will use this moment to rise to the occasion and build something truly remarkable.”

In a similar vein to Sequoia, Lightspeed went on to claim that “the boom times of the last decade are unambiguously over”, adding that CEOs will have to make painful decisions in the next few months to keep their companies afloat, including taking decisions that might have been considered outlandish a few months ago.

In a note to its portfolio outlining a 10-point survival strategy, YC said, “The safe move is to plan for the worst.  If the current situation is as bad as the last two economic downturns, the best way to prepare is to cut costs and extend your runway within the next 30 days.”

Investors and founders are sobering up to the reality that after the 2021 party, market sentiment can change quickly. If at all the bearish weather lasts for the next 8-10 quarters as expected by Redpoint, then many more startups will be impacted severely, particularly those that are not in the position to extend runway even by cutting costs.