Bengaluru and Delhi NCR are the top two startup hubs in the country, hosting 69 unicorns and 61 soonicorns

Delhi NCR has shown signs of competing, launching around 5,000 startups from April 2019 to December 2021, while Bengaluru launched 4,514 startups

The last 15 months have been nothing short of spectacular for the Indian startup ecosystem, as the startups smashed multiple records and established India as one of the leading startup incubators during the period.

From the start of 2021, according to Inc42 reports, Indian startups have raised a cumulative $53.5 Bn in funding, the highest ever in five consecutive quarters, and only about $1 Bn less than in the preceding 20 quarters. Safe to say that we have seen a torrent of VC funding flowing into the startups of the country.

In 2021, the total funding amount in early-stage investment in these Tier 2 and 3 cities reached $144 Mn, according to Inc42 analysis. Further, $1.16 Bn of total funding in the growth and late stages of investment went to these cities.

Therefore, in all, the startups in these cities accounted for $1.30 Bn in funding across all stages.

Of those top cities, Bengaluru has the honour of having the sobriquet ‘the Silicon Valley of India’, a testament to the number of startups in the city. The numbers back it up; since the start of 2021, Bengaluru has seen more than $26 Bn in funding, which is almost half of the total funding that flowed into the country.

Delhi NCR, on the other hand, was not far behind either. During the last 5 quarters, the National Capital Region has seen startup funding to the tune of $12 Bn, more than a fifth of all startup funding in the country during the period.

However, the picture is not as black and white as it seems at a cursory glance like this.

Looking at startup funding is the crudest way one can decide which city is the most preferable, as one glance is enough to make it clear. 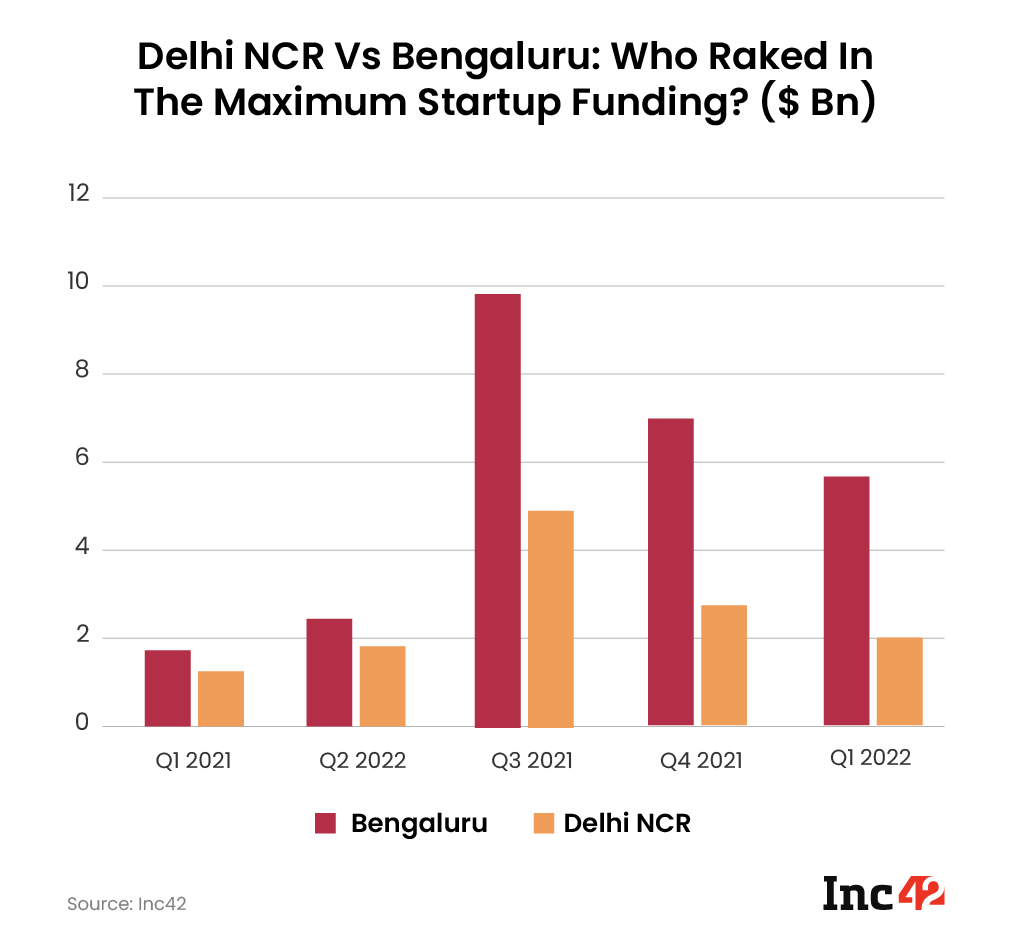 During the last 5 quarters, Bengaluru has led the entirety of Delhi NCR, which includes New Delhi, Noida, Gurugram, Ghaziabad, and Faridabad, in startup funding.

But the funding metrics tell a different story – a story that might wake up anyone dreaming of Delhi becoming the hub of India’s startup ecosystem.

Bengaluru’s average ticket size soared to $61.6 Mn during Q3 2021, which was the city’s best quarter throughout the last five quarters. On the other hand, Delhi NCR peaked at $69.2 Mn, outstripping Bengaluru’s by about $8 Mn.

It is also observable that India’s startup ecosystem, over the past five quarters, has seen something of a mod sine wave effect – a clear peak in terms of startup funding was achieved in Q3 2021 when the two cities accounted for $14.6 Bn in startup funding out of the total $17 Bn that the entire ecosystem raised during the time.

Bengaluru also recorded the most funding deals among the two cities during the last five quarters, averaging about 142 deals per quarter, and recording a chart-topping 179 funding deals in Q3 2021. Delhi NCR, during the same time, recorded an average of slightly more than 114 deals, peaking at 143 deals during Q4 2021.

Interestingly, Q4 2021 was the closest the two startup hubs came, in terms of funding deals. Only seven deals separated both the cities. 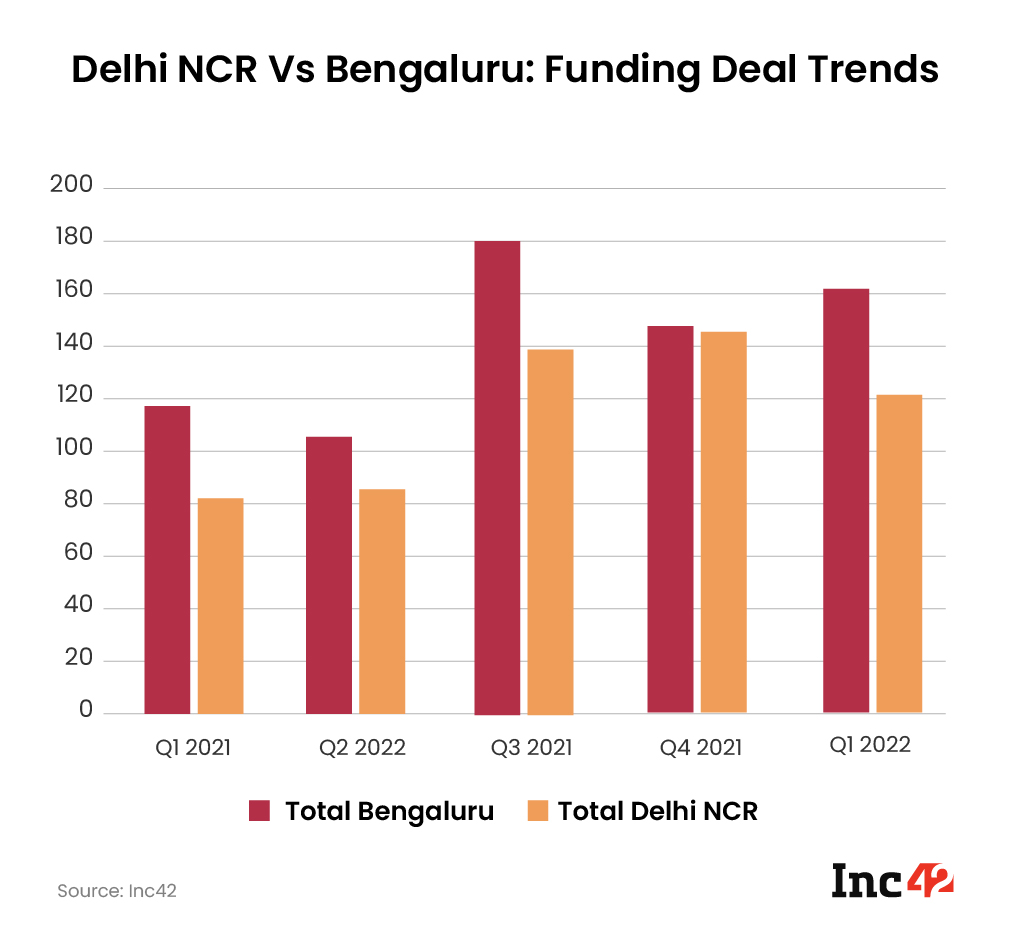 In terms of QoQ growth as well, Bengaluru leads Delhi NCR. However, things are not as rosy for both the cities and by extension, the Indian startup ecosystem, as the funding seems to be in a bit of a decline for the last two quarters.

The QoQ growth reached stellar heights for Bengaluru, and Delhi NCR also rallied through the boom that the startup ecosystem experienced throughout the majority of 2021, seeing 42 new unicorns being made in one year alone.

The funding trends make one thing very certain – Delhi NCR has a lot of catching up to do before it can compete with Bengaluru.

Stage-Wise Funding – Breaking Down The War Into Battles

While the broad trends seem to suggest that Bengaluru is far ahead in the game than Delhi NCR, stage-wise funding shows that the two cities, at least in some aspects, are very close indeed. 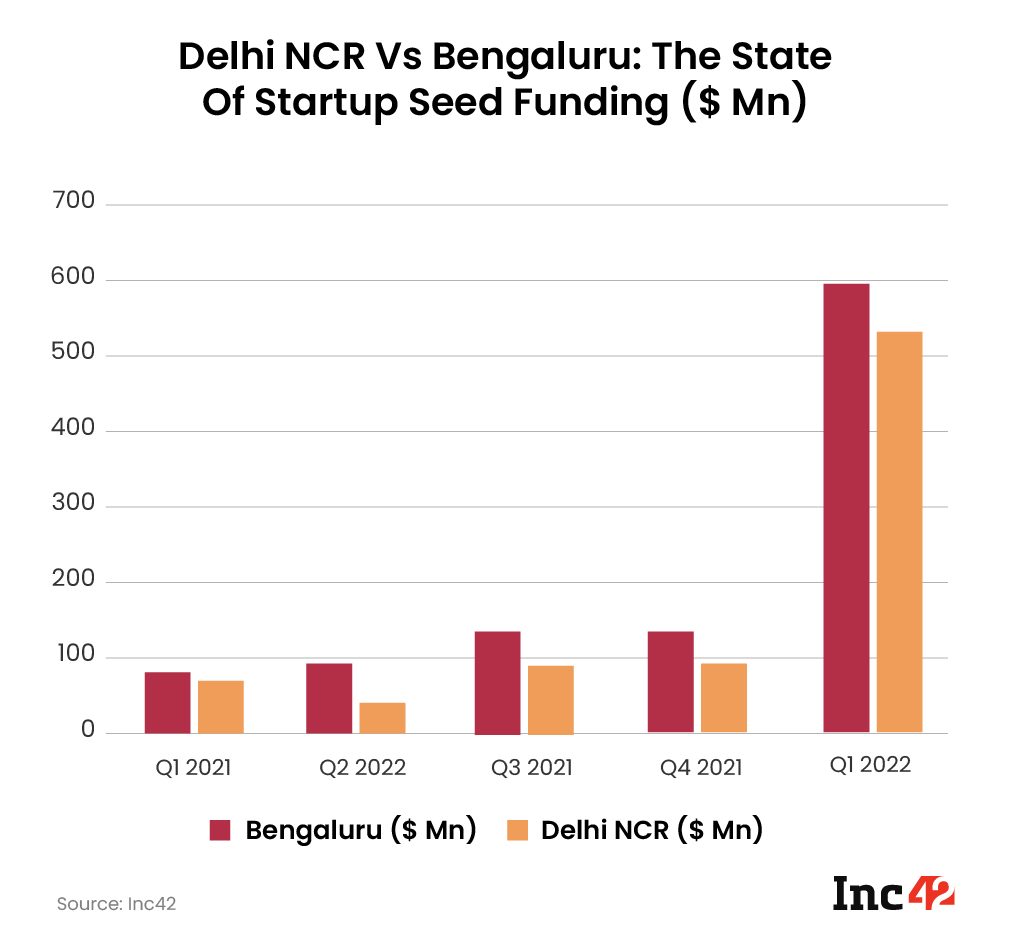 Seed funding saw an upsurge during the last quarter, as Delhi NCR and Bengaluru remained very close to each other during the last five quarters, with the maximum difference being at around $54 Mn in Q1 2022.

Seed and bridge funding are two of the earliest stages in startup funding, and Delhi is making a strong case for itself as a hub for new startups in the recent past. However, Bengaluru was home to the largest seed funding round ever, when Polygon raised $450 Mn in an unbelievable seed round in February 2022.

On the other hand, Delhi NCR’s largest seed funding round happened when Noida-based Public App raised $41.3 Mn in March 2021.

Growth stage funding saw the two cities involved in a close fight, again, with Q3 2021 seeing Delhi NCR turn the tables. However, Bengaluru made a comeback during the very next quarter. 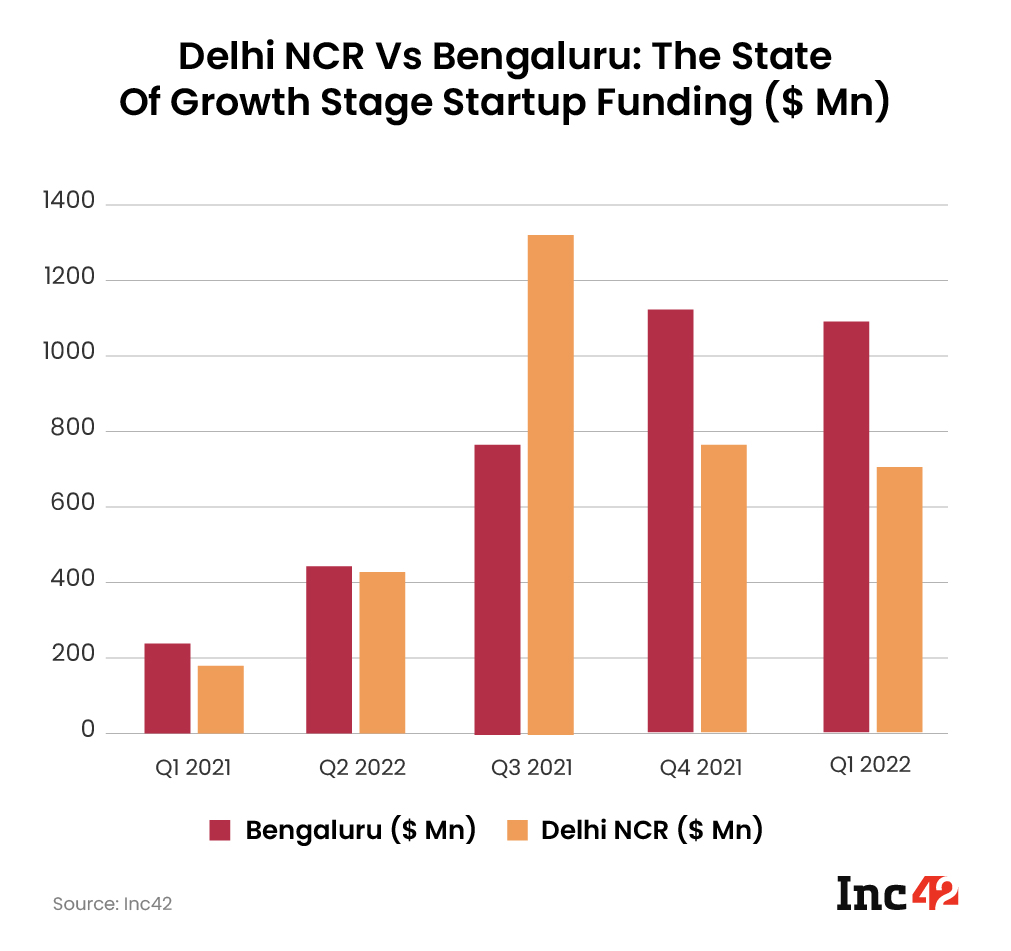 During the first two quarters, there was hardly any difference between the two cities. However, Delhi NCR took a decisive lead in Q3 2021, crossing the $1 Bn-mark and reaching $1.31 Bn, led by the $600 Mn and $285 Mn funding rounds of Pine Labs.

For Bengaluru, the tide-turning funding rounds happened in the next quarter. First, Ola Electric raised $200 Mn in an undisclosed growth stage round in October 2021, and then, slice raised $220 Mn in a Series B funding round in December 2021.

The capital of Karnataka kept the momentum ongoing through the first quarter of 2022, stretching its lead over Delhi NCR to $434.9 Mn.

Late stage funding is where the most money is, and Bengaluru leads this segment clearly. Here, the Silicon Valley of India stamps its authority as the de facto capital of India’s startup ecosystem by amassing a total of $22 Bn in late stage funding over the last five quarters, playing host to some of the largest funding rounds in the country’s history.

However, that is, again, a reflection of the nature of the startup ecosystem in the two cities. It shows that Bengaluru has a much more matured startup ecosystem, home to some of the largest startups in the country, while Delhi NCR has an up-and-coming ecosystem, barely in its infancy, yet being able to trade blows with Bengaluru during the earlier stages of funding. 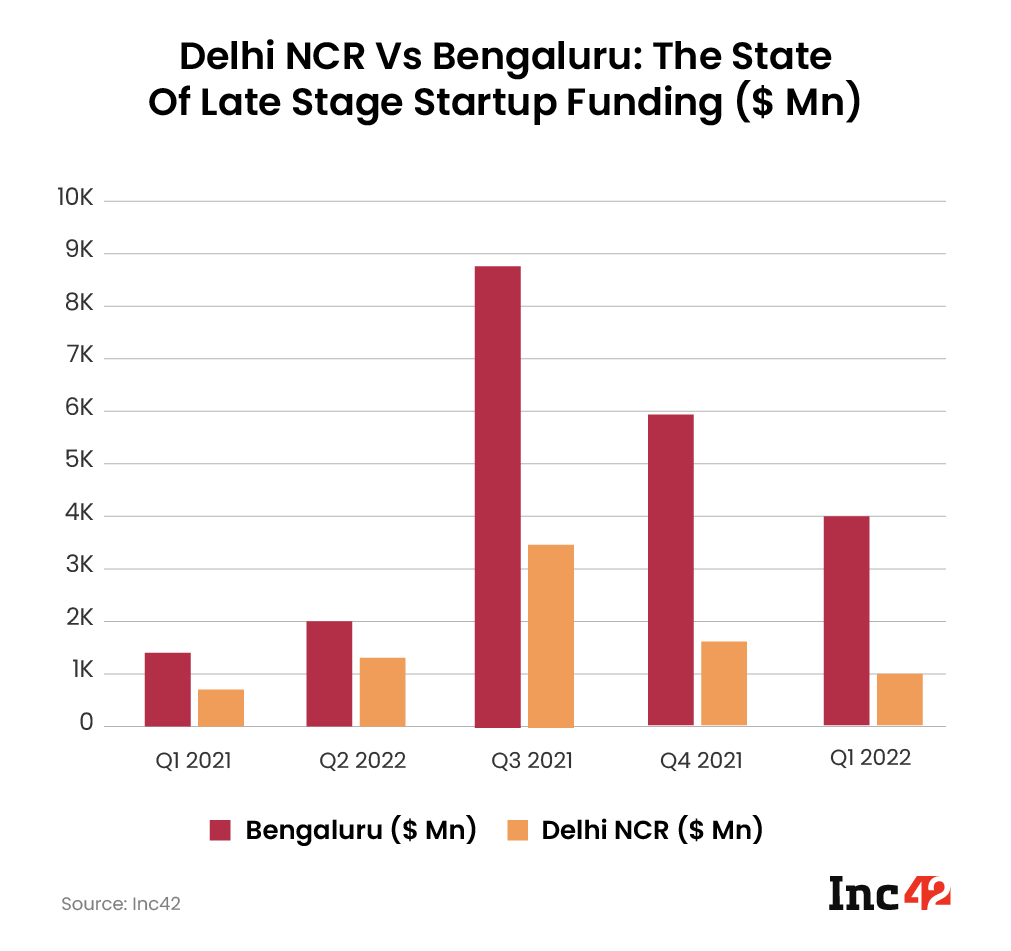 The sheer domination of Bengaluru can’t be understated here. While in the first two quarters Delhi NCR was able to keep up with Bengaluru, the latter saw the late stage funding skyrocket, reaching almost $9 Bn, in Q3 2021 even as Delhi NCR languished at $3.43 Bn.

For context, Bengaluru alone raised as much late stage funding in Q3 2021 as the whole country managed to raise in the quarter before across all funding rounds.

Then, just after a week, Swiggy raised $1.25 Bn in a Series J funding round, which meant that the two Bengaluru-based unicorns raised $4.85 Bn within 8 days, accounting for about half of the total late stage funding in the said quarter.

In fact, Bengaluru accounted for the top five biggest deals during the last five quarters. The other three rounds saw BYJU’S raise $1.2 Bn in November 2021, and another $800 Mn in March 2022, while Swiggy raised another $700 Mn in January 2022.

Where Are The Unicorns?

Since the beginning of 2021, India has seen 51 startups hit the unicorn status; in the history of India’s startup ecosystem, only 48 other startups have crossed the $1 Bn valuation mark. 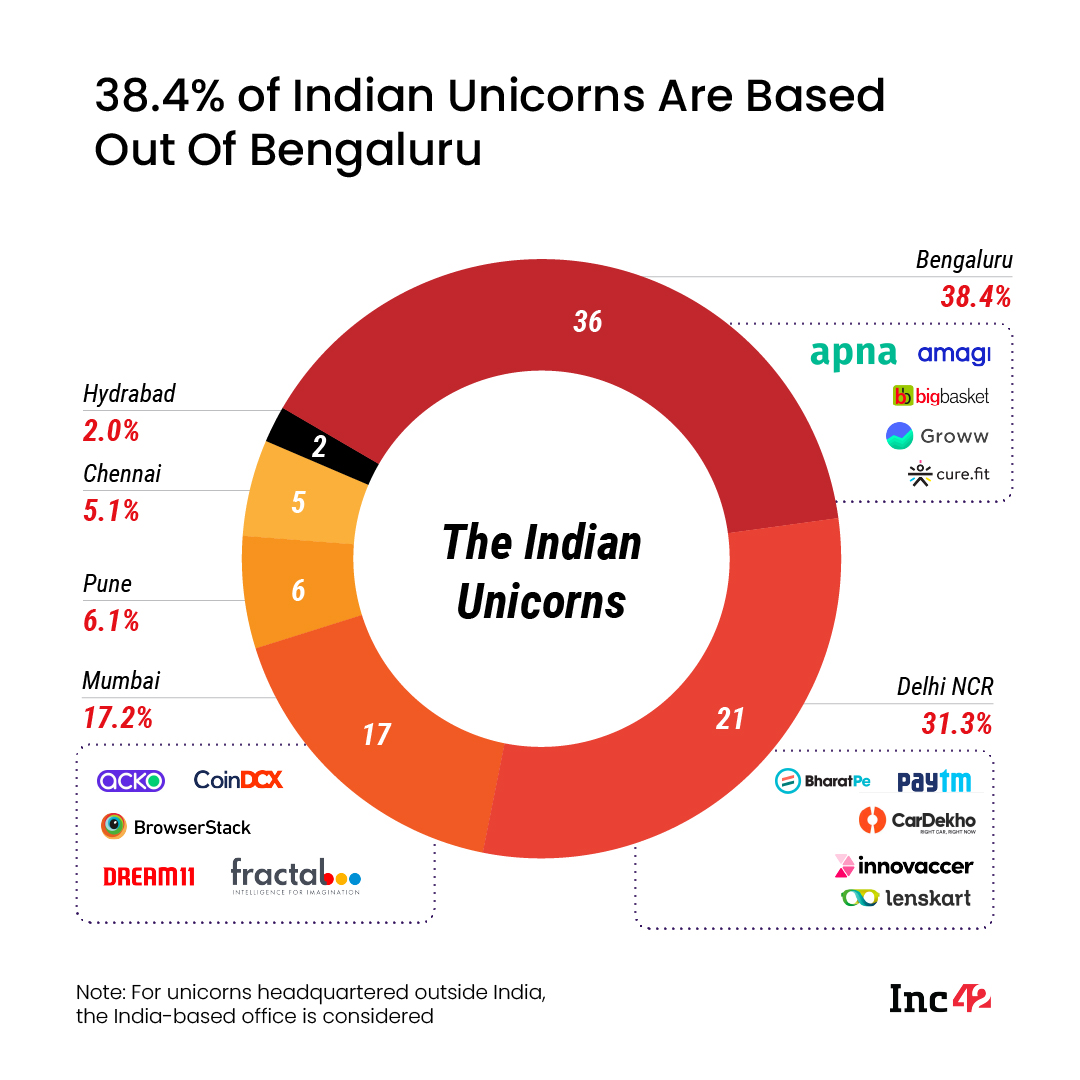 While it is only a matter of time before India sees its 100th unicorn, Bengaluru seems to be leading the race for housing the highest number of unicorns.

Bengaluru hosts 38 unicorns, while Delhi NCR boasts 31 unicorns. This is again a testament to the vastly more matured startup ecosystem of Bengaluru. 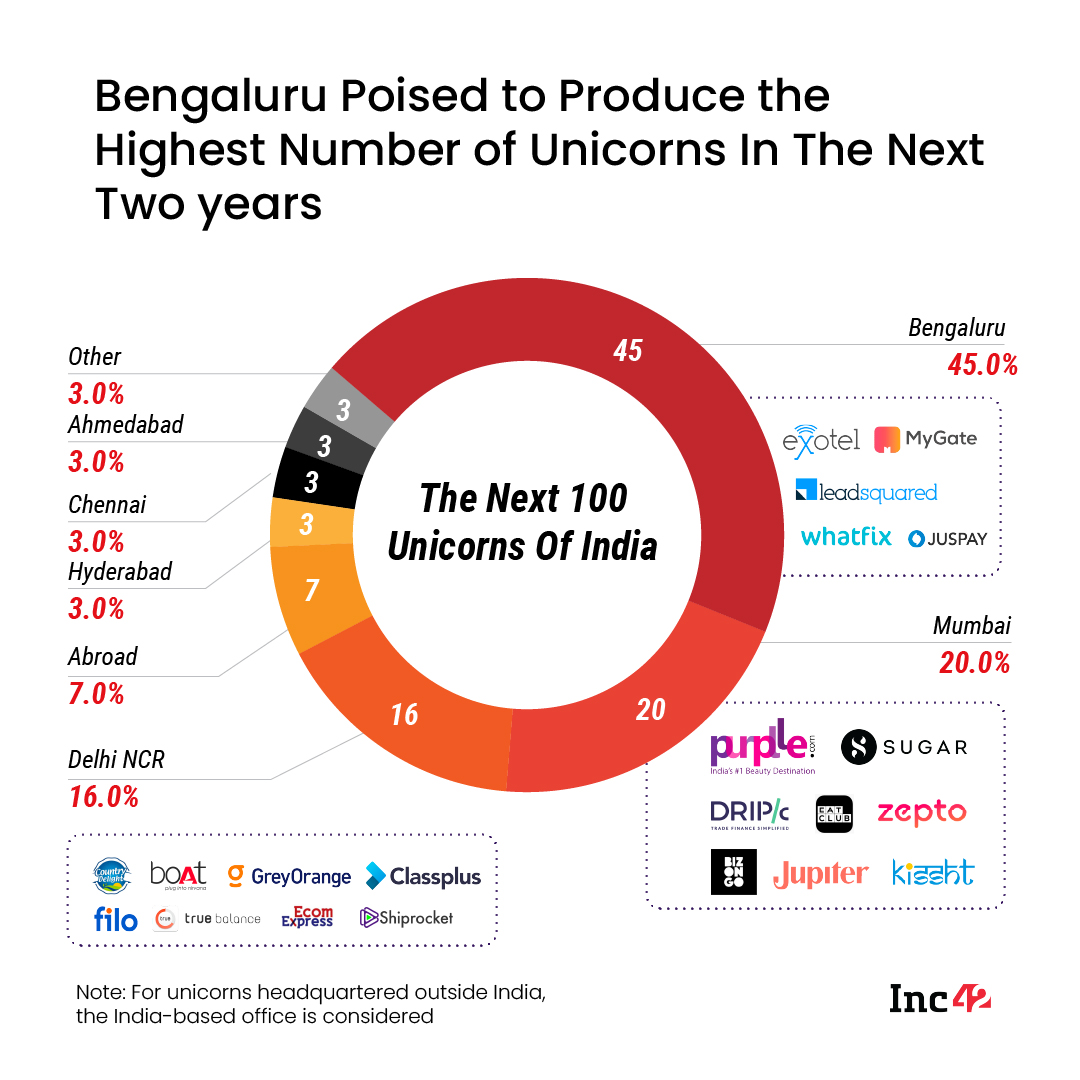 However, the fight is not as close as it seems. Even in terms of soonicorns, Bengaluru leads by a mile, boasting 45 soonicorns. Delhi NCR could only secure the third spot on this list, as Mumbai hosts 20 of India’s soonicorns, ahead of Delhi NCR’s 16.

Therefore, not only does Bengaluru have the most number of unicorns now, it will continue to do so for some time in the future as well. Most likely, India’s 100th unicorn will come from the Silicon Valley of India.

While Delhi NCR clearly has the potential, it needs as much time as Bengaluru got, and maybe, more startup-friendly policies to ensure that it can truly call itself the ‘startup capital’ of India.

Bengaluru’s victory here is as one-sided as when eventual champions Bayern Munich thrashed a lost-at-sea Barcelona 8-2 in the 2020 UEFA Champions League Quarter Finals. However, just like Barcelona of today, Delhi NCR is in the ascendancy.

For investors, it does not matter which city has the most startups as they will continue to look for innovation and projects that are worth putting money into. Right now, Bengaluru is that place, but it will be a challenge to hold on to this spot in the next few years, as India’s startup ecosystem continues to proliferate to other cities.