BEENEXT is the latest VC to release an advisory for its portfolio and startups in general after the likes of Sequoia, Redpoint, Y Combinator

BEENEXT's portfolio companies Trell and Zilingo have been in the news for their financial troubles, while BharatPe has also seen a
public power struggle

BharatPe, Trell and Zillingo backer BEENEXT has told its portfolio companies to get ready for a funding winter that will likely go on for the next 24 months. The VC, which has over 50 investments in India and several more in Southeast Asia and Africa, is telling startups all around to revise and revisit their budgets, projections and other metrics to survive and adapt to the winter.

BEENEXT is the latest VC to release an advisory for its portfolio and startups in general — Sequoia, Redpoint, Y Combinator had similar things to say to the founders and companies they have backed. The primary takeaway is to buckle up for the bumpy ride and extend the runway as much as possible.

VCs Wake Up To Funding Winter

To be clear, the funding winter is not something that has just set in. As per analysts and market observers, the decline in funding and sobering valuations was expected given the federal reserve’s interest rate hike, which had already brought in bearish weather. The decline in share prices of tech companies across sectors in the US and India was already a major signal.

However, it is only recently that the public chorus of investors advising startups to cut costs and extend runways has grown louder. Some might say that with over 8,000 layoffs in the Indian startup ecosystem this year already, the writing was already on the wall.

What VCs are now saying is that this is a graver situation than the initial Covid lockdowns in 2020, since the recovery then was boosted by fiscal policies, whereas now conservatism is the name of the game as far as policy is concerned. Naturally, investors are more worried about a long funding winter because policy reversals take several quarters and often only come under some kind of major recession. 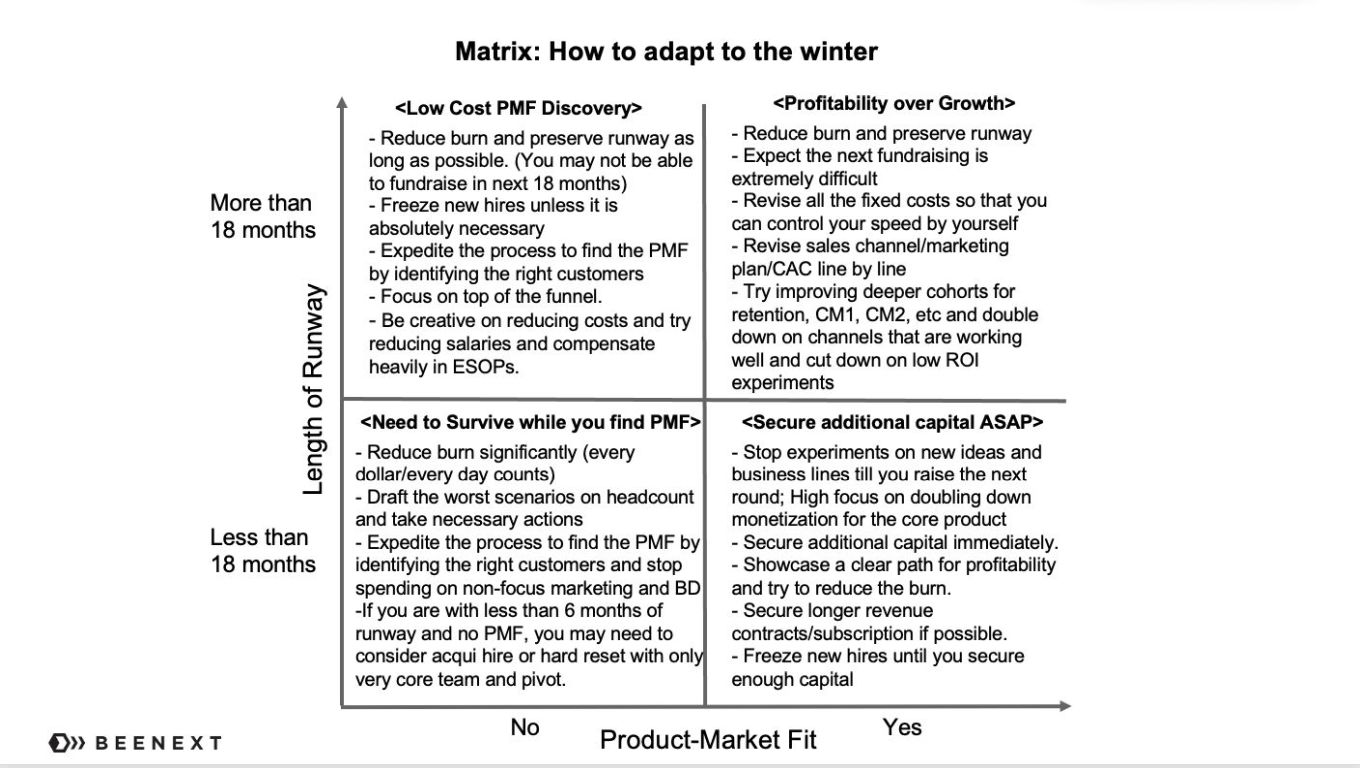 In the case of BEENEXT, it tweeted that startups across stages and runway lengths need to revisit business projections, customer segmentation, marketing spends and the headcount across operations. The latter should come as no surprise given the spate of layoffs in the Indian startup ecosystem.

Within BEENEXT’s portfolio, Bengaluru-based social commerce platform Trell has laid off over 300 employees since the beginning of the year. The company was in the market to raise a new round when certain irregularities were allegedly found in its financials, which has made fundraising complicated for Trell.

Zilingo is another portfolio startup that is going through a tough time as far as runway is concerned. As per sources, the company had delayed salaries for employees in April, but beyond this, it is seeing mass attrition including the exit of the CFO Ramesh Bafna. Singapore-based Zilingo is also struggling with managing its runway due to its debtors recalling loans in the wake of the suspension of CEO Ankiti Bose. Bose has since been terminated but the recalled loans weigh heavily on Zilingo’s books.

And in the beginning of the year, BharatPe was another portfolio company that saw a major public tussle between cofounder Ashneer Grover on one side and the CEO and the board on the other. While the matter has cooled down for now, it’s certainly far from over given that Grover still owns a significant stake in the company and is said to be exploring legal options to retain this stake if the company does not buy it back.

‘Survival Is The First Priority’

Besides this, BEENEXT told startups that do not have a long runway (18 months) to accept funding rounds even if there is no valuation jump. It also asked such startups to revisit pricing to widen the acceptability of products in a down market.

“Market has changed completely, so we need to be very realistic. Survival is the first priority rather than pricing,” BEENEXT advised startups with a short runway.

It also told such startups to stop experiments on new ideas and business lines. While that may have been the focus in the past couple of years to tap the digital transformation wave, the focus is now on monetisation of the core product and revenue generation.

The VC recommended that startups that have a longer runway work with their other shareholders to revise fixed costs across operations. It also told such startups to focus on widening the deeper levels of their funnel to grow retention in channels that are offering the best ROI.