Is Cofounder Tag The New ‘Thing’ For Retaining Senior Talent?

Prominent startups such as Medlife, Dailyhunt, Pesto Tech and others have also brought on cofounders after launch

Is it about rewarding the mindset and commitment of employees or are there other factors at play?

The journey of building a startup takes founders through many uncharted paths and choppy waters. In the initial days, the drive and passion of the founder or the cofounders is what keeps a startup going, but as it matures and grows, the business needs leaders at every crucial link in the operations. Often startups that begin with one or two founders grow to such great heights that it’s impossible for them to see how they could have got there without the contribution of the key members in the team.

This contribution, the commitment to the startup and the fact that some leaders have stuck around even in lean times cannot just be rewarded with salary or stock. In many cases, it means adding them as a cofounder.

This week, the Indian startup ecosystem was abuzz with discussions around these themes after Zomato named its food delivery business CEO, Mohit Gupta as the cofounder. Mohit Gupta bagged the cofounder title after spending little less than 2.5 years at the company.

Zomato cofounder and CEO of Deepinder Goyal said that while the foundation of Zomato was built before Mohit Gupta joined the company, he has been instrumental in significantly strengthening it over the last two years.

And this isn’t the first time Zomato onboarded a new cofounder. Just last year, the company elevated its COO Gaurav Gupta as a cofounder. Gupta had joined Zomato in 2015 as a business head (for table reservation) and was promoted as COO in January 2018. Like Zomato, several startups like Medlife, Dailyhunt, Ola amongst others have taken this approach to recognise leadership qualities or when bringing former investors or close associations on board. 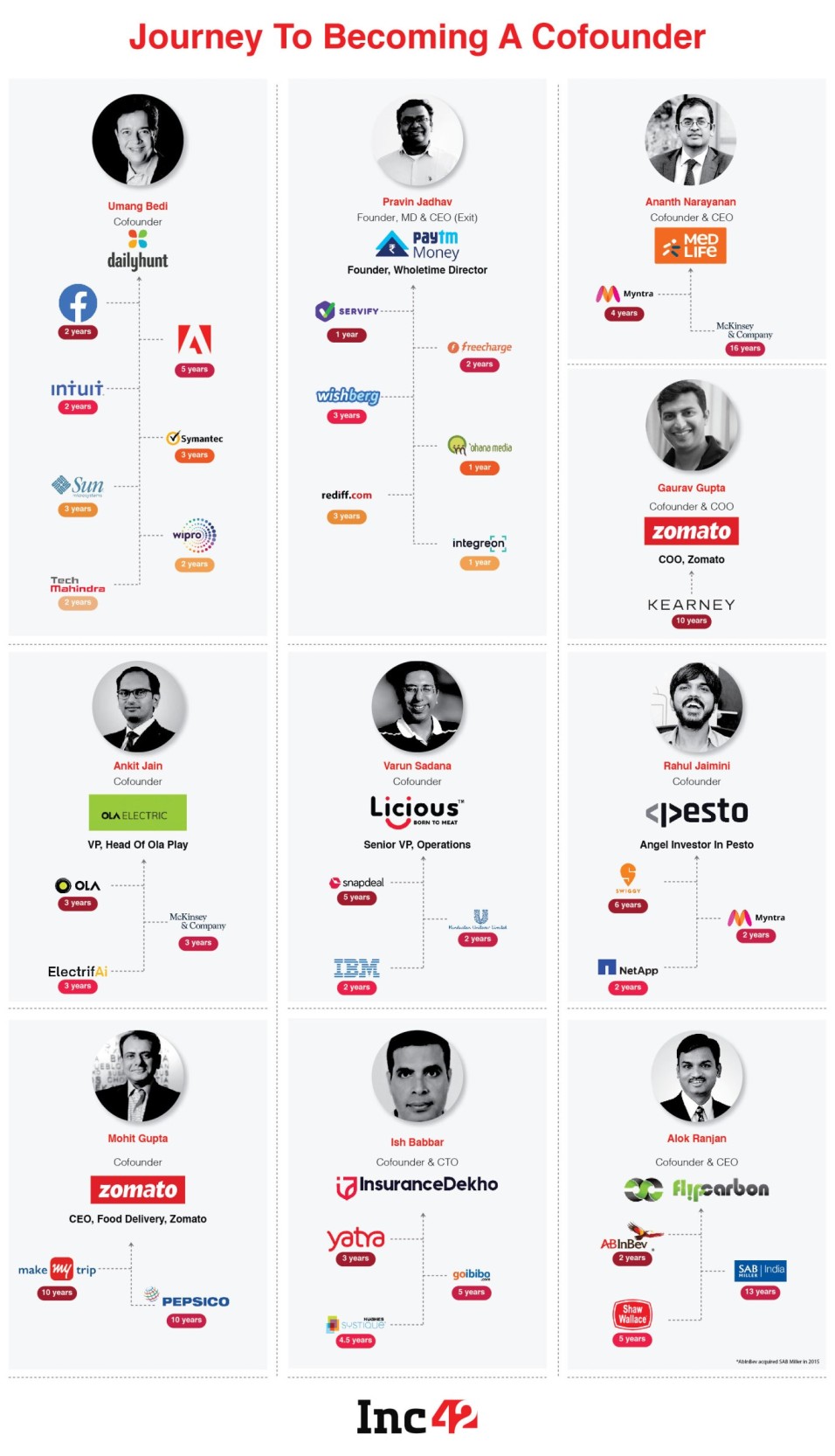 So what does it really mean to appoint a cofounder after the business has already been launched? Many said it’s about rewarding the mindset and the commitment, more than just recognising good work.

Besides, several early-stage founders look for cofounders after launching, particularly those looking for technology or financial expertise. There are even startups like CoFoundersLab that help founders look for cofounders at industry events or through cofounder speed dating, besides Facebook groups that also support founders in their search. While there have been instances of existing employees being promoted to cofounder, external hires usually add some measure of expertise by also assuming the role of CEO, COO, CTO, CFO or other department heads, depending on the sector.

In our conversations with some ecosystem stakeholders, the primary reasons that emerged were retaining senior-level employees, hiring an executive or manager that’s well known in the industry to impress investors and increase the brand’s popularity.

Zomato launched a Founders Programme a little over a year ago, outlining a few qualities that all founders must exhibit. These qualities include trustworthiness, commitment and resilience among other things.

At the time of Gaurav Gupta’s promotion, Goyal had said that it’s not a reward.

“This is empowerment, for the right person, to seamlessly be able to level-up to a role which he has shown the potential for.”

Healthtech startup Medlife hired former Myntra CEO Ananth Narayanan as cofounder and CEO in August 2019. Talking to Inc42 about his role at Medlife, he had said, “I think my skills are actually taking a business which has a product-market fit like Medlife and scaling the business. It is very entrepreneurial and as I said I have invested in our business, I am joining as cofounder, I am not just CEO. So I’m very excited about building this into an institution over the next 10 years.”

Then we have cases like Rahul Jaimini, cofounder and former CTO of Swiggy. Jaimini recently announced his exit and plans to join edtech startup, Pesto Tech. The interesting thing is that Jaimini was already associated with Pesto as an investor. Swiggy cofounders had invested in Pesto last year in May.

Other examples include Pravin Jadhav, cofounder of consumer rewards platform Wishberg, which was sold to Freecharge in 2014. Jadhav joined Paytm in 2017 and created its wealth management product Paytm Money from scratch. He transitioned into a full-time role as founder of Paytm Money and whole-time director, and then MD & CEO over the last three years. But he has now moved on from the company, with plans to work on a new undisclosed venture.

Similarly, at Ola, there’s the case of Ankit Jain, who worked on Ola’s premium product Ola Play and then scaled up its electric mobility business with Ola Electric as a new entity. Interestingly, Jain was a year ahead of Ola cofounder and CEO Bhavish Aggarwal at IIT Bombay.

Despite these examples, there’s no clear answer to the question of why an employee is elevated to cofounder at any of the above startups or why these startups hired a new cofounder externally? None of the companies in the chart above chose to respond to Inc42 about the particular need that drove them to take the call.

But there are other ways leaders come on board i.e through acquisitions. In the case of startups that have acquired other startups and integrated disparate teams, the presence of multiple cofounders from different companies can be a source of ego clashes. But some startups have found a way to avoid this with inclusive leadership and decision-making. Foodtech giant Dineout, for example, has acquired four startups in its lifetime — inResto, Gourmet Passport, Torqus and Binge Digital. Altogether, there are as many as eight former or current ‘cofounders’ working under one organisation at Dineout after some exited. But the company seems to have found the right formula.

The idea is to give freedom and a wide berth to the ‘acquired cofounders’ so that they continue their vision, but at the same time, as founders of the company, pitch in as and when required. “The synergy between our teams is so strong that Vijayan [Parthasarathy, cofounder inResto] often refers to me as the cofounder of inResto rather than Dineout,” Dineout cofounder Vivek Kapoor told Inc42 in an earlier interaction.

So there are many ways that companies look to fill the gaps in the leadership roles and what works for one may not always be the right decision for a different startup. Ultimately, after a certain stage, the founder or cofounders of a startup need to drive the vision — that is after they have set up a well-oiled machine that pretty much runs by itself.