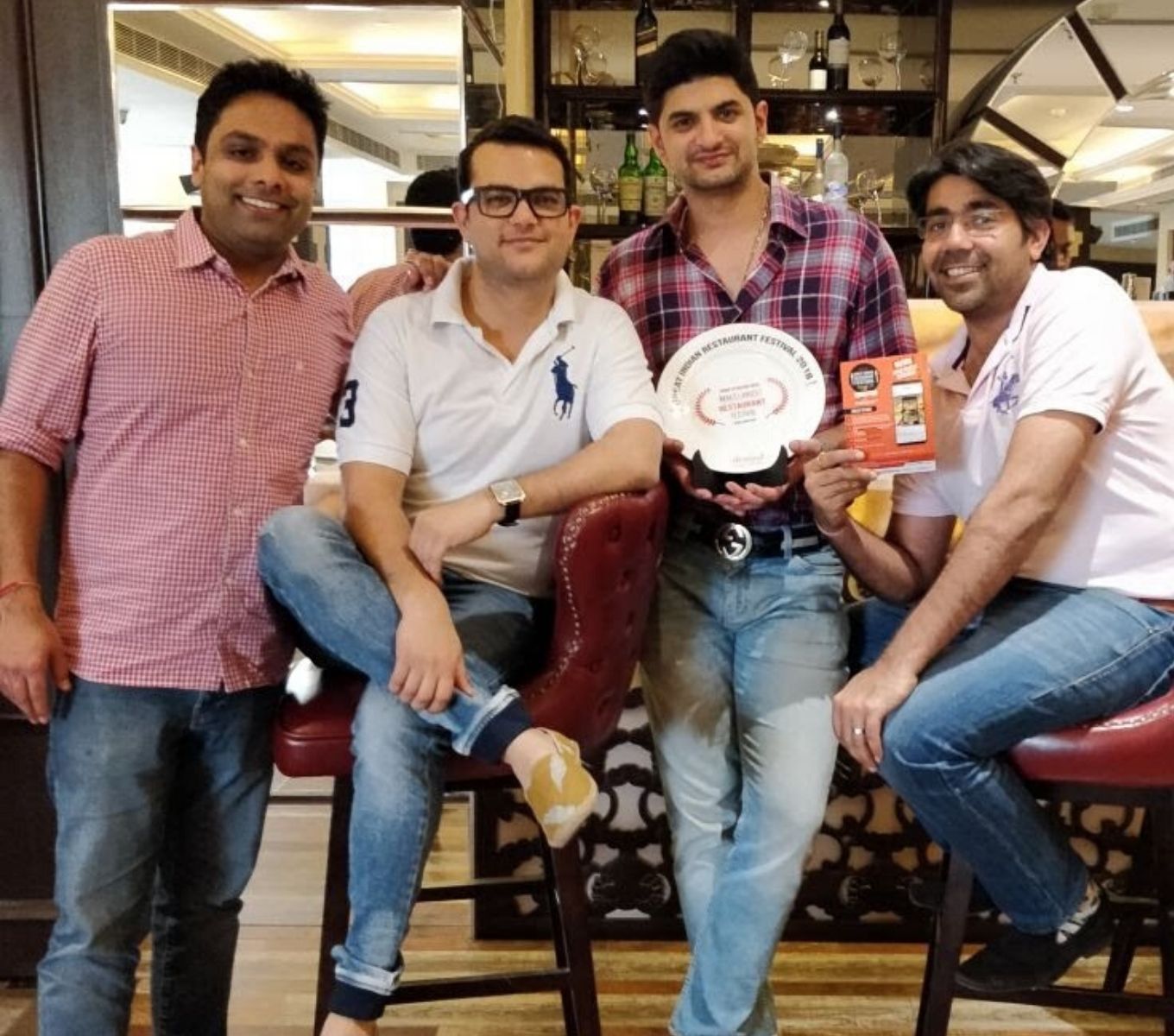 Through its acquisitions of Gourmet Passport, inResto, Torqus and Binge Digital, Dineout has looked to solve key problems in the industry

Could Dineout’s story be a lesson for growth-stage entrepreneurs on the acquisition path?

Like most great ideas, this one started out as a simple insight shared by childhood friends.

Back in 2012, Ankit Mehrotra, Sahil Jain, Nikhil Bakshi and Vivek Kapoor, had a spark which is today Dineout, India’s largest dining-out platform backed by a team of over 900 people.

While the four lived in different parts of the world in 2012, they encountered a big problem every time they met in India—table reservations were a norm in the West, but not a big part of the dining out culture in India. With no good solution in sight, Mehrotra, Jain, Bakshi and Kapoor often had to wait for hours every time they went out for a meal.

Their solution was Dineout, which set out to make online reservations seamless for Indian diners, but today supports restaurants in streamlining their end-to-end operations as well. Dineout’s founders logically evolved their simple idea with a sharp focus on technology, and with a problem-solving approach, instead of piling on features for the sake of them. This approach caught the eye of Times Internet Limited (TIL), which acquired Dineout in 2014.

As it grew from an idea to a huge platform, Dineout saw that restaurants faced many challenges due to factors such as low adoption of tech, lack of right solutions, and inefficiencies in the process. It also noticed that diners wanted more than just the ability to reserve tables—for example, deals and discovery of new restaurants were also huge factors. And while Dineout looked to tackle these issues for diners and restaurants, it came across tech solutions that fit its vision and forged ahead on the problem-solving approach that had already earned it recognition, by bringing these innovative solutions onboard the Dineout journey.

How Do Restaurants Manage Their Operations?

That was a big question when Dineout looked to add more solutions to its offering. In the early years of this decade, restaurants managed the clientele and reservations manually on paper. In Bengaluru, Vijayan Parthasarathy and Vamsi Yalamanchili were tired of having to wait for long for a table at Toit—one of Bengaluru’s busiest restaurants. With more than 100 diners in the queue, the restaurant’s waiting list was managed through physical sticky notes and notebooks by the restaurant. The duo wanted to give restaurants the right tools to solve this.

Their startup, inResto, allowed restaurants to manage their front-end operations via queue management, reservation management, customer loyalty tracking, order management, feedback management and more. These were the areas that Dineout was also looking to solve for restaurants and in inResto, it found the right tech and capable leaders to bring this vision to fruition.

Dineout acquired inResto in September 2015, and today its suite of nine products serves more than 10K restaurants. According to Parthasarathy, this transition was smooth because there was much similarity in the culture and ethics of inResto and Dineout. He added that despite coming on board, Yalamanchili and him were able to guide inResto in the direction they wanted, and they also had the freedom to be creative and experiment with new innovative products.

“Since the acquisition, we have been working closely with the business development teams to get market feedback. This helps us not only better the product but also understand the competition. Our key is to create next-generation products for the restaurant industry,” Parthasarathy.

In fact, this relationship extends both ways — inResto was given the freedom and a wide berth to continue its vision, but at the same time, Dineout founders also pitched in when required. “The synergy between our teams is so strong that Vijayan often refers to me as the cofounder of inResto rather than Dineout,” cofounder Kapoor told Inc42.

With inResto on board to streamline operations, Dineout had started focussing on other problems and one of the biggest for restaurants was managing payments.

Over in Pune, Tanmay Ratnaparkhe and Suneet Kulkarni recognised this challenge as well due to lack of automation in billing systems. Their solution was called Torqus, which worked on a single integrated point of sale (PoS) system for multiple third-party aggregators. With an understanding of how to build product life cycles, the duo with MNC background was able to figure out the payments gap and created the right solution for restaurant back-end operations including PoS and supply chain management.

When Dineout started exploring the possibility of bringing Torqus on board, one of the things that helped clinch the deal was how seamlessly Torqus’ backend solutions complemented the inResto software suite that Dineout had implemented already. This synergy was the right fit, and Dineout acquired Torqus in November 2018, merging its capabilities with inResto’s.

Finally, it had begun to flesh out its end-to-end restaurant management solution as well as reservation platform for diners.

“Being a part of Dineout, we have a headway to the entire restaurant fraternity and access to a larger market. Since the acquisition, our vision has scaled up with an increase in our portfolio of products to offer,” Ratnaparkhe told Inc42, about how Torqus has grown since becoming part of Dineout.

Of course, the Torqus founders had their inhibitions that the value of their opinions and their decisions would get diluted after joining Dineout. But the fact that Torqus has grown over 45% in terms of the number of clients would have helped tide over these doubts. Plus, its month-over-month revenue has surged over 2x, thanks to the higher leadership quotient.

“We now have more people within our leadership team to exchange thoughts and brainstorm ideas and accelerate the path to our envisioned goal. By the end of this financial year, we confidently believe we will be the largest F&B B2B software solutions provider in terms of the number of clients and outlets,” Kulkarni added.

How To Create A Premium Dining Experience?

Having solved the most basic pain-points for diners and restaurants, Dineout wanted to add a measure of premium-ness to its services.

At the time, restaurant loyalty and rewards startup Gourmet Passport—incepted by Rocky Mohan and Sid Mohan, of the Mohan Meakins (of Old Monk fame) family. While Gourmet Passport began life as a booklet exclusively for unique food experiences, it soon partnered with over 2K restaurants to expand its customer base across 10 cities.

And while Dineout was getting more and more users on its platform, it lagged behind in terms of features beyond cashbacks and discounts. Dineout founders wanted to do more for consumers in terms of offers, but in a reasonable manner to allay restaurant concerns. This is where Gourmet Passport fit right in, as it did not create a loss-making proposition for restaurants. Despite its buy-one-get-one model, it offered a limited number of redemptions, thus ensuring the restaurants didn’t get dissatisfied and leave the programme.

Mehrotra, being an ardent user of Gourmet Passport, was excited by the possibility of offering something similar to the users. The acquisition of Gourmet Passport in 2018, helped Dineout build its capabilities towards a premium membership programme for the users, which solved a major problem for restaurants by bringing disparate loyalty programmes under one roof. This allowed restaurants to get a clear view of all offers, and customise them according to their clientele.

Being veterans in the F&B industry, the Mohans also had their inhibitions about joining forces with Dineout in the beginning. Eventually, Dineout’s brand goodwill and the synergy between the two sets of founders helped Dineout close the deal.

Dineout’s Mantra: Acquire With A Purpose

It’s no secret that acquisitions allow startups to scale up and expand into newer areas at a faster pace, but often startups are caught in the trap of acquiring companies and sidelining the original vision. This is where Dineout differs, as it has always looked for the right fit, in terms of vision, product/service and leadership.

“What sets us apart is the combined strength of eight cofounders leading the evolution of the way India dines out,” said Mehrotra, cofounder, Dineout.

While in most cases, the founders of acquired startups tend to move out of the company, that has not been the case with Dineout. Even post the acquisition by Times Internet and through Dineout’s growth journey, the ‘new’ founders continued to be part of the core leadership team at Dineout, which has built a playbook of shared values aligned to a common goal.

“Using our experience and life instances to provide our acquired firms with new solutions and addressing the elephant in the room to improve existing flaws is our biggest learning. We also closely monitor feedback from our three key stakeholders—our consumers, our restaurant partners and our team,” Mehrotra added.

With this cohesive leadership, Dineout today helps drive over 250% conversions and acquisitions for restaurants in the B2B segment and helps drive up to 65% retention among existing diners. Dineout’s B2B services have grown by over 200% YOY in terms of revenue and customers, along with expansions in UAE, Bahrain, Kuwait, Saudi Arabia & East Africa. Today, it helps process over 40 Mn diner reservations and $800 Mn worth of transactions for its partner network of 45K restaurants in more than 20 cities.

When expectations between founders—even those who may come in later in the startup lifecycle — get misaligned, it often becomes a major challenge for startups and is a growth hurdle in the long run. But this was not an issue at Dineout even as it added more leaders across its operations through its acquisitions.

The freedom to follow the original vision has not broken the momentum of the products and services that Dineout wanted to integrate into its platform. And this could very well be the key to its end-to-end growth in the F&B industry.