From Cricket To Bollywood: Indian Celebrities In The Startup Arena In 2021

From Cricket To Bollywood: Indian Celebrities In The Startup Arena In 2021 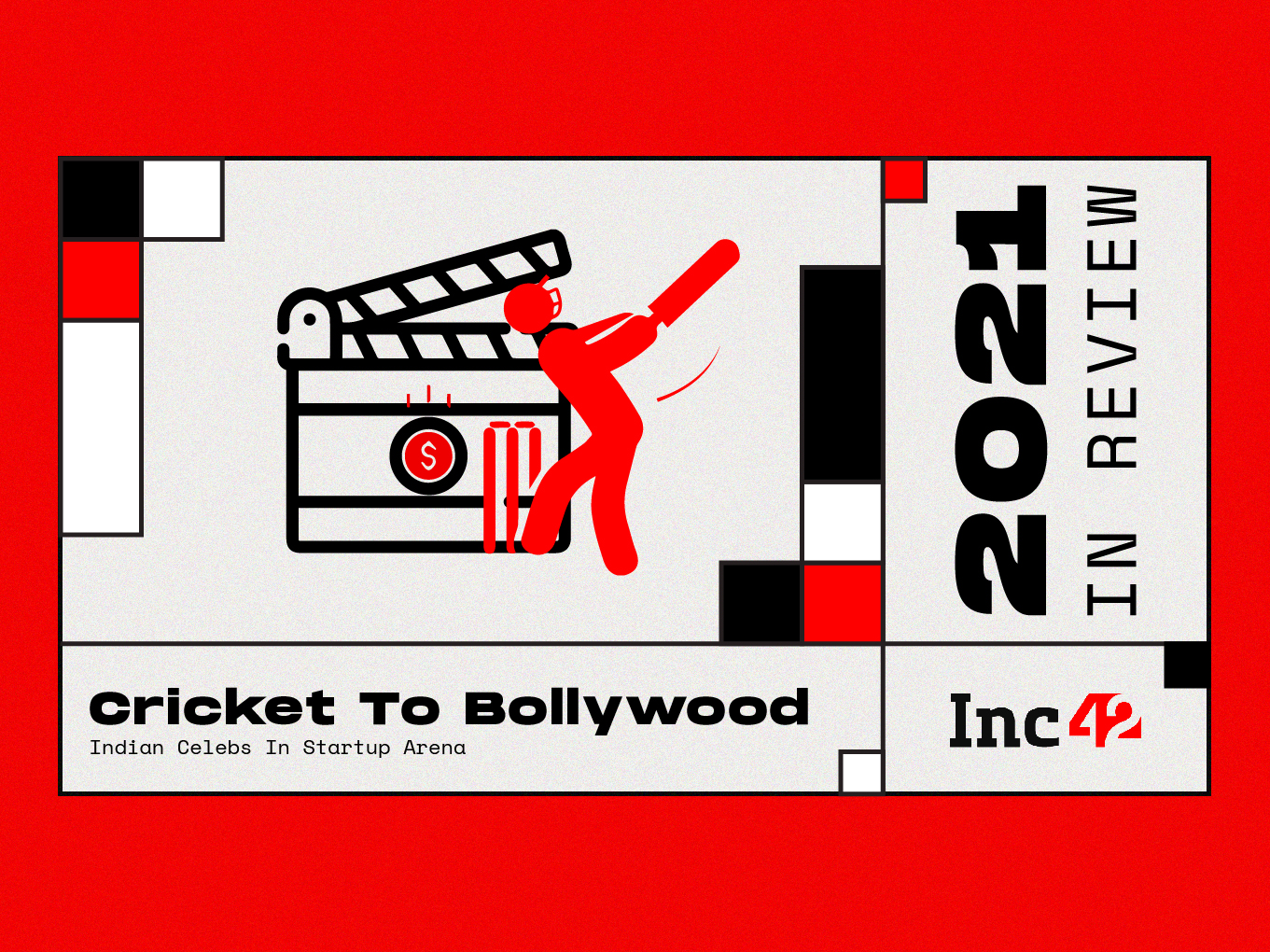 Cricketer Sachin Tendulkar and actor Deepika Padukone emerged as the most prolific startup investors this year, investing in six startups between them

Over the last couple of years, we have been seeing a trickle of Indian celebrities from the world of Bollywood and cricket joining startups in various capacities, and this year that trickling has turned into a heavy downpour.

As the Indian startup ecosystem took off over the past few years, it has attracted prominent individuals from all walks of life. Corporates and legacy businesses were the first to take notice, as they first began by competing with the startup fraternity in some of the same areas.

Then, corporates began acquiring some of the more agile startups that were better suited to certain markets than the legacy businesses themselves. After that, they began extensively investing in startups. Especially in the early stages as they were making long-term strategic bets on the future of the markets they were part of.

A similar story arc has been happening in the case of Indian celebrities, mainly from the world of Bollywood and cricket. The only difference is — instead of acquiring startups, celebrities are joining them as strategic investors and brand ambassadors. So what are the green shoots that have been attracting these celebrities from Bollywood and the world of cricket?

Here, we’ve curated a list of such celebrities who made some noise in the Indian startup ecosystem in 2021. While this list is by no means an extensive one, it contains details about the most prominent of the celebrities who have joined hands with startups and how they did so.

The award-winning actor, producer, national-level badminton player and supermodel has always had the reputation of being somewhat of a polyglot who has found success in multiple walks of life. Along with her career in media and entertainment, she also runs her own fashion line called All About You.

She is also one of the most prolific celebrity startups investors who has been investing in startups for many years now. Her family office marked its first investment this year with its participation in the $7.1 Mn pre-Series B funding round of Women’s wellness D2C brand Nua in June this year. Padukone is also set to work closely with the brand to ideate and create new solutions

Its next investment was in the $3.2 Mn seed funding round of learning and community platform FrontRow in August. It offers classes taught by celebrities from different fields including music, cricket and comedy. Some of the celebrities associated with the platform include singer Neha Kakkar, comedian Biswa Kalyan Rath and cricketer Suresh Raina.

Sachin Tendulkar, the ‘Master Blaster’ of Indian cricket too had his tryst with startups. It started this year when the edtech unicorn Unacademy roped him in as a strategic investor and brand ambassador in February. According to the partnership terms, Tendulkar will serve as a brand ambassador for the startup while also conducting a series of live interactive classes on the platform.

The former Indian cricket captain capped off the year by joining used car retailing startup Spinny as a strategic investor and brand ambassador too. Earlier this month, Inc42 first broke the story of Spinny becoming a unicorn after raising $283 Mn in a Series E funding round led by Abu Dhabi-based ADQ, Tiger Global and Avenir Growth at a $1.8 Bn valuation.

Primarily known for her work in Hindi and Tamil cinema, Aishwarya Rai Bachchan shot to fame when she won the 1994 Miss World pageant. Since then, she has been a popular name in the industry with blockbuster hits in her kitty. She also received two Filmfare Awards, Padma Shri and the Ordre des Arts et des Lettres from the government of France.

Bachchan began her investments this year by investing INR 5 Cr in nutrition-based healthcare startup Possible; as part of a larger funding round where the startup raised INR 15 Cr ($2 Mn).

Founded in 2015 by Vishu Saraf and Megha More, Possible claims to offer a research-driven nutrition service and healthy food products that can supposedly help with sustainable health management, weight loss and the management of lifestyle diseases. The program includes a personal coach that assigns customers a customised diet plan.

This is Aishwarya’s second investment in the Indian startup ecosystem. In 2019, she had invested in environment intelligence startup Ambee.

Mahendra Singh Dhoni is a former international cricketer who served as the captain of the Indian cricket team for over a decade, in both the limited-over format and six years in test cricket. He is currently the captain of Chennai Super Kings (CSK), a team of Indian Premier League (IPL) in Tamil Nadu where he is affectionately known as Thala (Leader).

Apart from being considered as one of the greatest Indian team captains to date, he also helped CSK to victory in the IPL four times — making him the most successful IPL captain after Rohit Sharma.

Dhoni had invested in the D2C food and beverage startup 7InkBrews and signed up as a brand ambassador for it in April this year. As part of the deal, the startup was to launch a new brand of handcrafted chocolates called Copter7, named after Dhoni’s signature shot called the ‘Helicopter Shot’.

In August, he entered into a three-year strategic partnership with interior design startup HomeLane where he picked an equity stake in the startup and signed up to be its brand ambassador.

Founded by Rama Harinath, Srikanth Iyer, Tanuj Choudhry and Vivek Parasuram in 2014, HomeLane helps consumers get their homes designed with a high degree of personalisation by using its virtual design platform SpaceCraft, which offers a real-time pricing engine that lets customers keep track of their potential spend.

Yuvraj Singh is a former Indian international cricket player who played all formats of the game for the country. He is known for his aggressive batting skills and match-winning all-round performances in international games.

Earlier last month, he had invested in consumer electronics brand Nothing during its $50 Mn funding round that saw participation from film producer Karan Johar as well among others.

In July this year, it released its first product, the Nothing Ear (1), a pair of true wireless headphones that features an eye-catching transparent design that proudly displays its internals that is designed to be both functional and aesthetically pleasing.

This is not Yuvraj’s first investment in the startup ecosystem. He has backed health D2C brand Wellversed, JetSetGo, Healthians amongst others.

Zoya Akhtar is an Indian film director, screenwriter and producer who is famous for directing a host of popular movies. She also co-wrote the film Talaash which won her father Javed Akhtar a music award for ‘Lyricist of the Year’.

Her brother Farhan Akhtar is a Bollywood actor, director, screenwriter, playback singer, producer and television host who is famous for his roles in films like Rock On!!, in which he was also a producer and Bhaag Milkha Bhaag which won him a Filmfare Award for Best Actor.

Earlier this month, Inc42 first broke the story about how EV-manufacturer Ola Electric raised investments from the brother-sister duo along with Paytm founder Vijay Shekhar Sharma among others. Unfortunately, everything isn’t hunky-dory for the EV startup — it had to reportedly delay the delivery of its electric scooters yet again due to the ongoing chip shortage.

Alia Bhatt: Biz With A Cause

Alia Bhatt is a Bollywood actor who has won a Filmfare Critics Award for her role in Highway, she also won Filmfare awards for Best Actress for her roles in Udta Punjab, Raazi and Gully Boy.

Last year, after investing in StyleCraker and now-public Nykaa, Bhatt launched her own startup called Ed-a-Mamma, which is a kidswear fashion brand that offers clothes for children between the ages of two and fourteen. The brand sells its products through its own website as well as through platforms like Amazon and Flipkart.

Earlier this year, Bhatt invested in D2C wellness startup Phool.co, which converts floral waste into charcoal-free luxury incense sticks and other products. It plans to utilise the freshly-infused capital towards its research and development and expand its footprint globally.

Malaika Arora is a Bollywood actor, dancer, model, VJ and television personality who attained fame as a dancer in many popular Bollywood movie songs. Earlier this year, she launched Malaika Arora Ventures to invest in lifestyle, health, fashion and wellness brands. The fund marked its first investment in October this year when it invested in D2C ayurvedic nutrition brand Kapiva. Arora also joined the startup as a brand ambassador.

Shraddha Kapoor is a Bollywood actress and singer who began her acting career with her brief role in the 2010 heist movie Teen Patti before her lead role in Luv Ka The End. But she is most famous for her role as a singer in the hugely commercially successful Aashiqui 2.

In addition to her acting, she has also sung in many of her own movies including Haider, ABCD 2, Ek Villain and others. Earlier this year, she had invested an undisclosed amount in personal care company MyGlamm, where she also joined as a brand ambassador.

Since then, the startup has restructured itself with Good Glamm Group as an umbrella company and went on a spree of acquisitions where it acquired PopXO, Moms Co and ScoopWhoop among others.

Varun Dhawan, an Indian film actor, was shot to fame for his brilliant performances in many Bollywood films. Earlier this month, he invested an undisclosed amount in the D2C nutraceutical brand Fast&Up.

Fast&Up manufactures products for active living, including nutrition and immunity, across segments. Chicnutrix, the other flagship brand of Fullife Healthcare (the parent company of Fast&Up) is an all-women wellness, beauty and nutrition brand.

Well, that’s all folks—if you want to read more about celebrities wading into the world of cutting-edge business and technology, you can read our extensive report on the Indian celebs that entered the NFT ecosystem in the country this year.