Paytm To Merge Its Digital Wallet With Payments Bank, Aims To Bank On Increased Wallet Signups

Paytm To Merge Its Digital Wallet With Payments Bank, Aims To Bank On Increased Wallet Signups 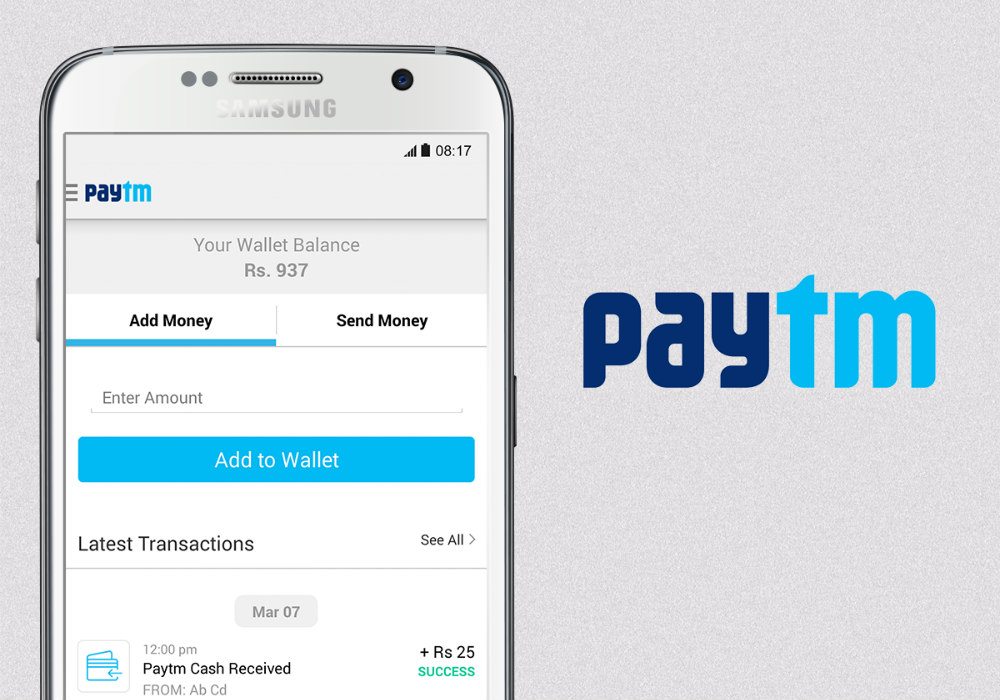 Paytm’s parent company, One97 Communications issued a public notice that it would be transferring its wallet business, after necessary approvals, to the newly-incorporated Payment Bank entity.

As a part of the merger, a customer’s Paytm wallet will now move to the Paytm Payments Bank Ltd., in the same capacity. So if Paytm doesn’t receive any communication from the user before December 21, 2016, each user will have a bank account with Paytm.

In the public notice, Paytm also gave the option to customers to list themselves out if they wish to, by mailing at [email protected] or logging into paytm.com/care and redeeming balances by a one-time bank transfer by specifying the bank details. If failing to give bank details, the customer wouldn’t be able to transact with the wallet until they submit their bank details.

The above changes and transfers aren’t applicable for individuals whose wallets have been inactive for the last six months and show a zero balance. 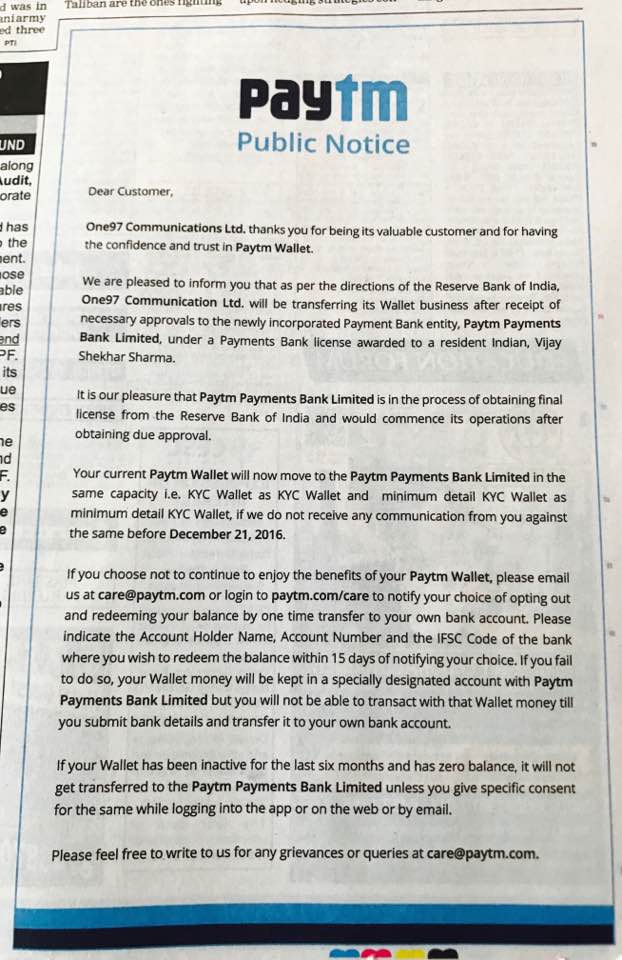 The company has set a target of 200 Mn accounts, across current accounts, savings accounts, and mobile wallets, within 12 months of the launch. It aims to touch 500 Mn accounts by 2020. According to an official statement, Sharma has invested $16 Mn (112 Cr) in the business, while the rest has come from One97. Sharma will hold a 51% stake in the Payment bank, and 49% stake will be held by One97.

Further clarifying the matter, Paytm, in an official blog said, “Paytm Payments Bank Limited is in the process of obtaining the final license from the Reserve Bank of India and would commence its operations after obtaining due approvals. As per regulatory requirements, Vijay Shekhar Sharma will own the majority share in Paytm Payments Bank Limited.” 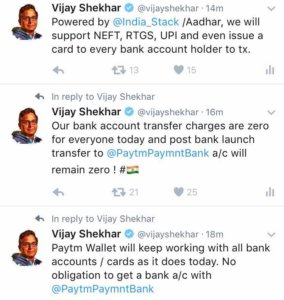 According to Sharma, the government’s demonetisation drive, which has mandated people to look for alternative cashless options for conducting transactions, has created an opportunity to open more payments bank accounts. Moreover, since demonetisation on November 8, 2016, the company’s monthly spend has gone up 3x for the month, according to an official statement.

In August 2015, mcommerce company Paytm received a license from the Reserve Bank of India to set up a payments bank. In April this year, IAMAI appointed Paytm Founder Vijay Shekhar Sharma, as the chairman of the newly formed Payments Banks Group at IAMAI.

It was reported that One97 Communications Ltd and its founder Vijay Shekhar Sharma have collectively invested $32 Mn (INR 220 Cr) till date in Paytm Payments Bank Ltd, ahead of its launch that has now been pushed towards early 2017.

Earlier this month, Airtel beat Paytm to launch the pilot of its Payments Bank Limited, Airtel Bank in Rajasthan. The pilot is aimed at testing systems and processes ahead of a full-scale country-wide launch. Customers in towns and villages across Rajasthan will now be able to open bank accounts at Airtel retail outlets, which will also act as Airtel banking points and offer a range of basic, convenient banking services.