Ola Has Signed A 3-Year Contract With South Western Railway 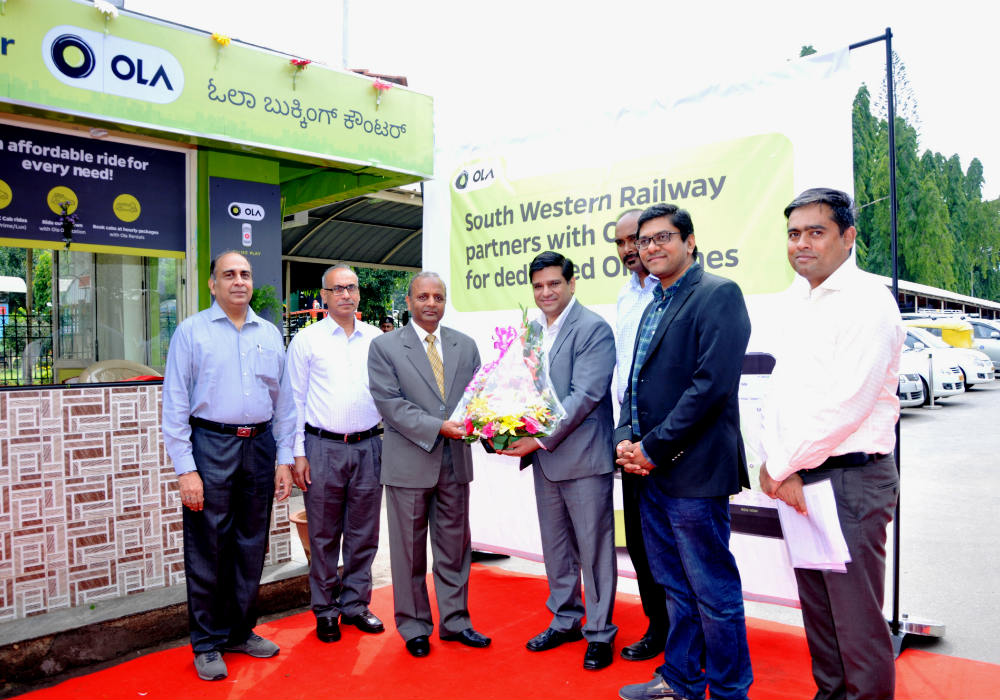 Cab aggregator Ola has entered into a three-year partnership with South Western Railway to launch dedicated Ola Zones in 12 railway stations in Bengaluru.

Commenting on the partnership Vishal Kaul, Chief Operating Officer, Ola said, “We are excited to join hands with South Western Railway to build a convenient mobility experience for lakhs of commuters across the 12 key railway stations in Bengaluru City.”

After setting up the Ola Zones, commuters will be able to have easy and affordable last-mile connectivity through these railway stations.

The ‘Ola Zone’ will be a pickup and drop off point for commuters. Ola vehicles will also, have an allotted dedicated parking spots.

An official statement claims that the Zones will ensure an expected time of arrival (ETA) of cabs as low as 2 minutes. Apart from this, kiosks will have representatives to assist commuters in booking rides, etc.

Sridharamurthy – Sr. Divisional Commercial Manager, South Western Railway said, “This association, of providing a dedicated OLA pick zone in the Railway station premises, is the first-of-its-kind in Indian Railways and is a great example of how public and private transport can work together and complement each other’s strength to help and solve the last mile connectivity issues of the Railway passengers. This association will also offer Railway passengers a comfortable commuting experience.”

In May 2017, it was reported that Chennai Metro Rail Limited had identified spots in elevated and underground metro stations for private cab operators, to put up their kiosks. The kiosks would be set up at the Metro stations within a month.

Recently, Ola raised a $50 Mn funding from hedge fund Tekne Capital Management in June 2017. The round was a part of the ongoing capital raise where Ola also raised $350 Mn from existing and new investors at a valuation of $3.5 Bn. In May 2017, the company raised $104 Mn from RNT Capital and US-based hedge fund Falcon Edge Capital. In April 2017, it was reported that Ola was in talks to raise a $100 Mn funding.

In January 2017, the Indian government announced to bear up to 60% of the research and development (R&D) cost for developing the indigenous low-cost electric technology. Ola has already taken the initial steps. In May 2017, Maharashtra Chief Minister Devendra Fadnavis inaugurated India’s first multi-modal electric vehicle project and an Ola electric charging station in Nagpur.

Just yesterday it was reported that Uber had pumped close to $7.9 Mn in its India unit. On the revenue front, while Ola’s losses tripled to $360 Mn in FY 2015-16, Uber reported an overall loss of $2.8 Bn for FY 2015-16. Uber has also forayed into food delivery with its newly-launched UberEATS service. Currently operating in Gurugram and Mumbai, this service gives local restaurants a delivery option.

Ola and Uber are competing for users’ attention and ease of convenience on all fronts – be it providing on-the-go entertainment, food delivery or door-to-railway station logistics services. With their war chests loaded, the drop in post-GST rollout cab-hailing fares, it remains to be seen who emerges the winner.