Cryptocurrency This Week: India And South Korea Shy Away From The Bitcoin Party And More

Cryptocurrency This Week: India And South Korea Shy Away From The Bitcoin Party And More

Important Happenings From The World Of Cryptocurrency, Bitcoin, ICOs And More [ 24 December - 30 December] 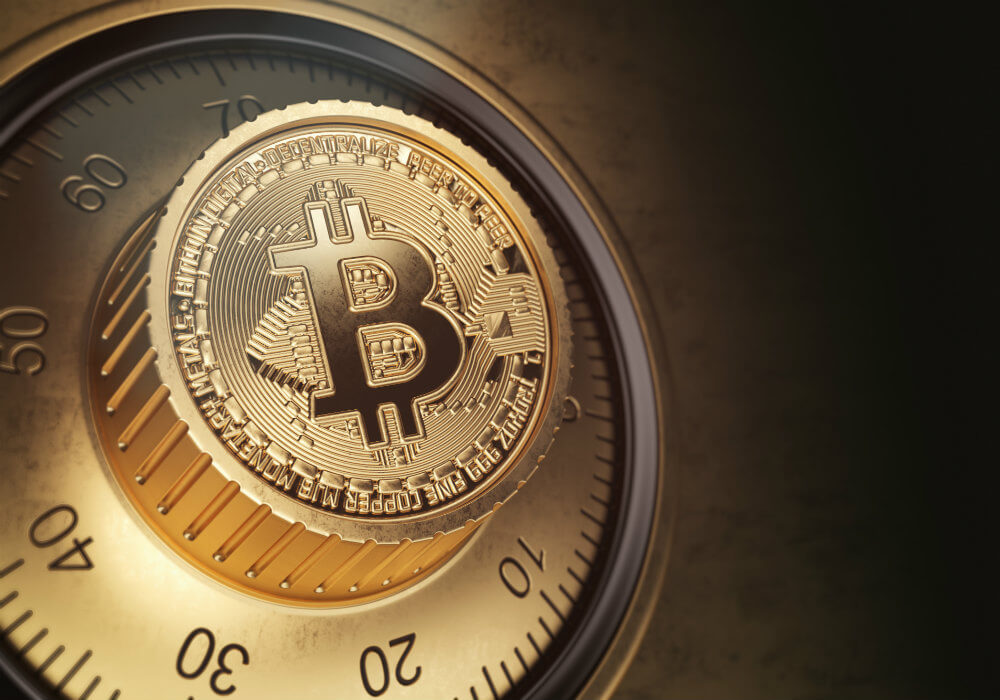 It’s the end of the year 2017! Celebrations continue, despite the recent mayhem at the Lower Parel-pubs in Mumbai. And, so does the enthusiasm of cryptocurrencies led by Bitcoin! Having entered the year 2017 at $700, Bitcoin was fast, furious and feisty cryptocurrency, despite the critics, nobel laureate economists, and veteran bankers having written it off. Bitcoin at $13,658, significantly down from $20K, has remained the costliest currency and most profitable asset in the world.

Amid leading exchanges Cboe and CME launching Bitcoin futures, Bitcoin flew high, high enough to touch $20K. Having said that the abyss, the deep chasm that came along continued to block the way. In Mainland China, one of the world’s largest cryptocurrency market, authorities decided to shutdown the trading. Russia, till date, has officially closed her eye toward these cryptocurrencies. To which, ‘she will blink,’ says the enthusiasts.

Hard-forks also rocked the cryptocurrency market this year. Bitcoin went under two hard-forks back-to-back: Bitcoin Cash and Bitcoin Gold. Besides the two, the latest hard-fork by Segwit2x community has just happened now. Ethereum, another leading cryptocurrency is scheduled to another hard-fork on January 19, 2018. Bitcoin Cash, hard-forked from Core Bitcoin in a short span of five months has already gone under one hard-fork.

The feisty ride of Bitcoin, Ethereum, Ripple, IOTA, Bitcoin Cash and some other cryptocurrencies also kept the authorities alarmed. As sophisticated Bitcoin fraud and Ransomware attacks continued this year, some of the cryptocurrency exchanges had to shut down their operations owing to hackers’ attacks and money laundering.

While China, Russia and Vietnam officially have banned Bitcoin and cryptocurrency trading so far, and India and South Korea are set to join the gang-bang, Bitcoin also observed its Euphoria moments in Belarus and Venezuela

This week again, cryptocurrency news are loaded. While the Indian government has now clearly termed Bitcoin trading illegal, terming Bitcoin as some Ponzi schemes, fussed from North Korean hackers’ attack over its cryptocurrency exchanges, South Korea is also considering an all-out ban over cryptocurrency trading. The news were so powerful that the Segwit2x hard-fork that took place yesterday went unnoticed and failed to garner people’s attention at large.

As Bitcoin continued to grab traders and investors attention, despite RBI having issued several notifications over the same, Ministry of Finance has cautioned Bitcoin and other cryptocurrency traders against the risk involved in such ‘Ponzi schemes’, in a statement released this week.

The Ministry has clarified that cryptocurrencies including Bitcoin have got no intrinsic value. The virtual currencies are neither backed by any physical asset nor a legal tender.

Inc42 had earlier reported that Bitcoin traders and their corresponding exchanges are now facing difficulties in digital payments. At times, the transactions are getting delayed by a day or more.

Bitcoin and other cryptocurrencies were so far understood to belong to an uncharted territory, neither legal nor illegal.

The statement read, “There has been a phenomenal increase in recent times in the price of Virtual ‘Currencies’ (VCs) including Bitcoin, in India and globally. The VCs don’t have any intrinsic value and are not backed by any kind of assets. The price of Bitcoin and other VCs, therefore, is entirely a matter of mere speculation resulting in spurt and volatility in their prices. There is a real and heightened risk of investment bubble of the type seen in Ponzi schemes which can result in sudden and prolonged crash exposing investors, especially retail consumers losing their hard-earned money.”

Emphasising the risk and illegality involved in Bitcoin trading, the finance department said, “Consumers need to be alert and extremely cautious as to avoid getting trapped in such Ponzi schemes. VCs are stored in digital/electronic format, making them vulnerable to hacking, loss of password, malware attack etc. which may also result in permanent loss of money. As transactions of VCs are encrypted they are also likely being used to carry out illegal/subversive activities, such as terror-funding, smuggling, drug trafficking and other money-laundering Acts.”

After Income Tax officials issued notices to over 500K HNIs trading Bitcoin and other cryptocurrencies in India, it appears that the cryptocurrency exchanges in India are destined to meet the same fate as their Chinese counterparts.

After shutting down their instant deposit facilities, Bitcoin traders and their corresponding exchanges are now facing difficulties in digital payments. The transactions are getting delayed by a day or more.

Writing “crypto payment” or using any cryptocurrency-related keywords such as Bitcoin, Ripple Ethereum etc in the ‘Remarks’ space appears to have created such payment delays, stated Atulya Bhatt, cofounder BuyUCoin. “As far as bank accounts are concerned, we have not received any call from our banks; however, we are facing issues while transacting through a payment gateway.”

Despite the Indian government keeping itself completely away from the cryptocurrency trading, the Bitcoin fever refuses to settle down. In the past few weeks over a dozen exchange and trading platforms have been founded.

Founders of an ecommerce platforms’ aggregator Buyhatke, Gaurav Dahake, Prashant Singh and Srikanth Sethumadhavan have launched a cryptocurrency exchange called Bitbns this week. Currently offering Bitcoin trading, Bitbns aims to enable traders to deal in multiple cryptocurrencies. Customers who sign up with Bitbns before 31st Dec, 2017, will be eligible for trading at zero fees till 31st of January, 2018, claims the company.

Speaking to Inc42, Gaurav Dahake stated, “If KYC norms are strictly followed, we do not see any challenge there. Cryptocurrencies should be treated like any other securities or stocks. People are going to earn money through this and some part of it is going to go as taxes to the government. We should also be as a country be more willing to be pioneers in technology than be the followers. Cryptocurrencies and exchanges are blockchain 1.0. There would be potentially many important applications that would come up once this wave is welcomed with open arms.

Speaking to the press, Bharat said, that the app would permit a range of transactions, including payments, remittances, B2B commerce, supply chain finance, asset management and trading. 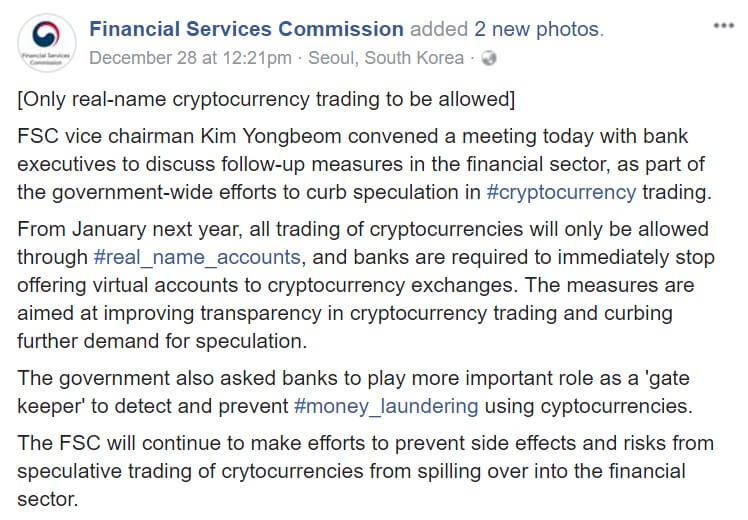 In a Facebook post, the FSC the regulatory authority of South Korea stated, “The government had warned several times that virtual coins cannot play a role as actual currency and could result in high losses due to excessive volatility.”  The Chairman has also hinted a possibility to go for an all-out ban if necessary.

The development has come after one of the South Korean exchanges Youbit announced to shut down of its operations after North Korean hackers allegedly stole a hefty amount of Bitcoin from the exchange.

Needless to say, the news of banning cryptocurrency has adversely affected Bitcoin price, as South Korea is the third largest market of cryptocurrency in the world.

Segwit2x: The Most ‘Awaited’ Hard-Fork That Went Unnoticed

Amid rocking news from India and South Korea, and Bitcoin tumbling down, the Segwit2x that reportedly occurred on December 28, has largely gone unnoticed. This is also because the rebooted project, proclaiming redesign with better replay protection and 4 Mb block size, has not been backed by the original Segwit2x developers but an unknown brigade of Bitcoin enthusiasts.

Despite having a 4 Mb block size, the team named the hard-fork as Segwit2x just to ride over the popularity, however, could hardly get noticed among the community. Rachel Mcintosh decoded the Segwit2x confusion here.

Despite all the fast, furious and feisty ride of Bitcoin, the recent developments have once again put a huge question mark over Bitcoin and other cryptocurrencies, marking a 360° journey at the year-end.

The year 2017 hallmarked the importance of cryptocurrency and the underlying technology blockchain, as many of the countries/states including Russia, India and Dubai announced plans to launch their own fiat cryptocurrencies.

Led by Japan, Australia, and the US, Russia and China, reportedly sitting on the regulation act, might soon join the Bitcoin gang in 2018!

What would be the road-ahead for Bitcoin, the second most googled word in 2017? What do you think folks?