Is The Indian Cryptocurrency Party Over? Exchanges Report Issues With Banks And Payment Gateways

Is The Indian Cryptocurrency Party Over? Exchanges Report Issues With Banks And Payment Gateways 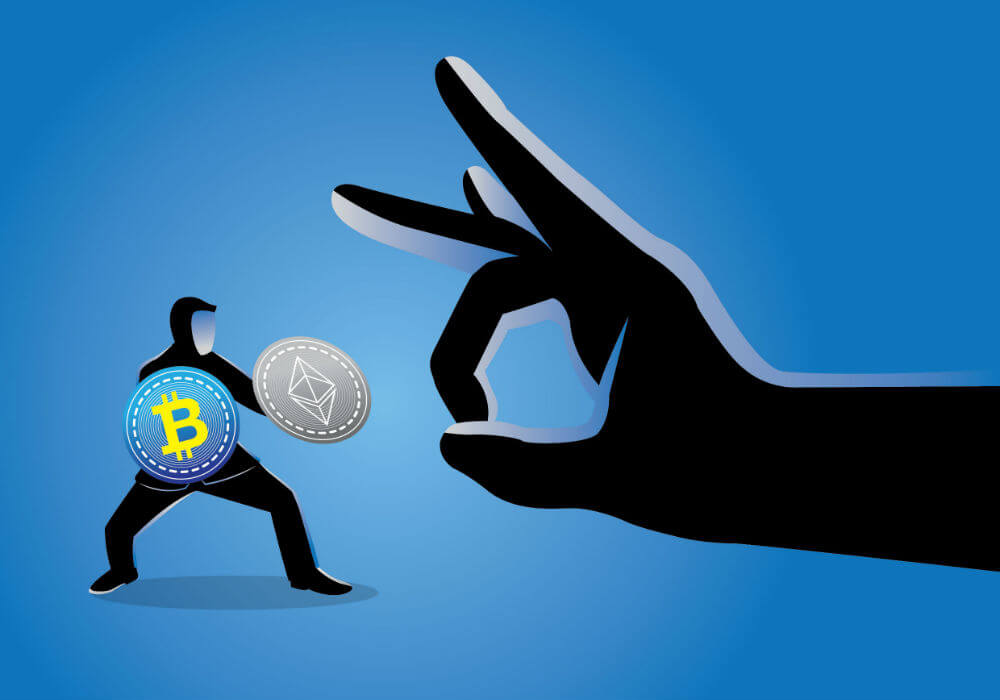 After Income Tax officials issued notices to over 500K HNIs trading Bitcoin and other cryptocurrencies in India, it appears that the cryptocurrency exchanges in India are destined to meet the same fate as their Chinese counterparts.

It is to be noted that China never banned cryptocurrency exchanges directly; however, created a difficult circumstance by banning ICOs and issuing advisories and circulars (by lower authorities) that led BTCC, ViaBTC and other Chinese exchanges to shut down their exchange operations in Mainland.

In a related development in India, Bitcoin traders and their corresponding exchanges are now facing difficulties in digital payment. At times, the transactions are getting delayed by a day or more. One of the Bitcoin traders, Soumya Banerjee said, “I transferred money at 5 AM in the morning and my bank debited the same $780.5 (INR 50K). Even after 13 hours, it’s not there in my Unocoin wallet. It’s really bad.”

More or less, Inc42 has received similar complaints from other exchange users too. Among the other issues, speaking to Inc42, another user Lalit Kansal informed that enabling Google authenticator has created big issues for his Koinex wallet. The authenticator has erased his private key, and now, he is unable to access the Bitcoin he bought. The complaint, made on December 23, is yet to be entertained.

Last week, Andhra Pradesh-based Bitcoin India, a multi-cryptocurrency exchange and Bitcoin mining platform had reportedly locked out the accounts of some of its cryptocurrency traders. The traders were unable to access their accounts and money for more than a month.

So, is it entirely the fault of exchanges? Not exactly. Indian cryptocurrency exchanges have got bigger issues to deal with.

Speaking to Inc42, Jabeer, Group COO of Belfrics, said, “For the past few weeks, bank transactions were getting delayed without providing any information on the same. However, yesterday, we got a call from our partner banks stating that they have been asked to shut down the cryptocurrency exchange accounts. Since then, we are not depositing any money into our bank accounts, and have also requested our customers the same.”

Sathvik Vishwanath, co-founder and CEO of Unocoin stated, “We have heard about the development, however, we can’t confirm the same at this point in time.”

In line with the development, Zebpay has sent an update to its Bitcoin traders stating, 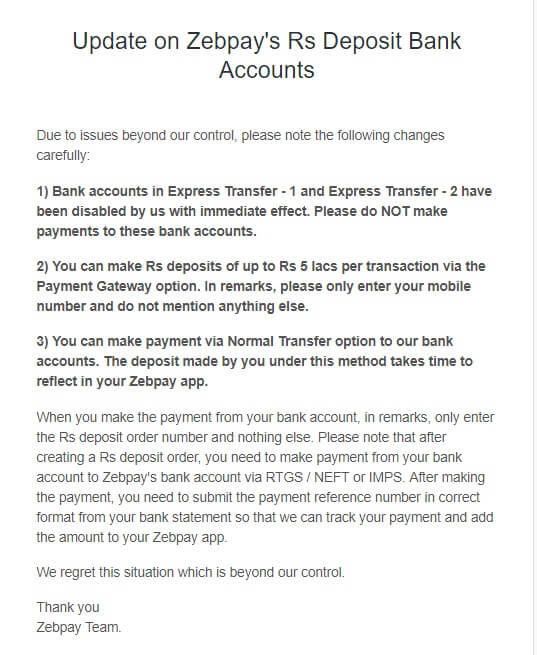 Another cryptocurrency exchange Ethx India has sent a similar notice to its users. 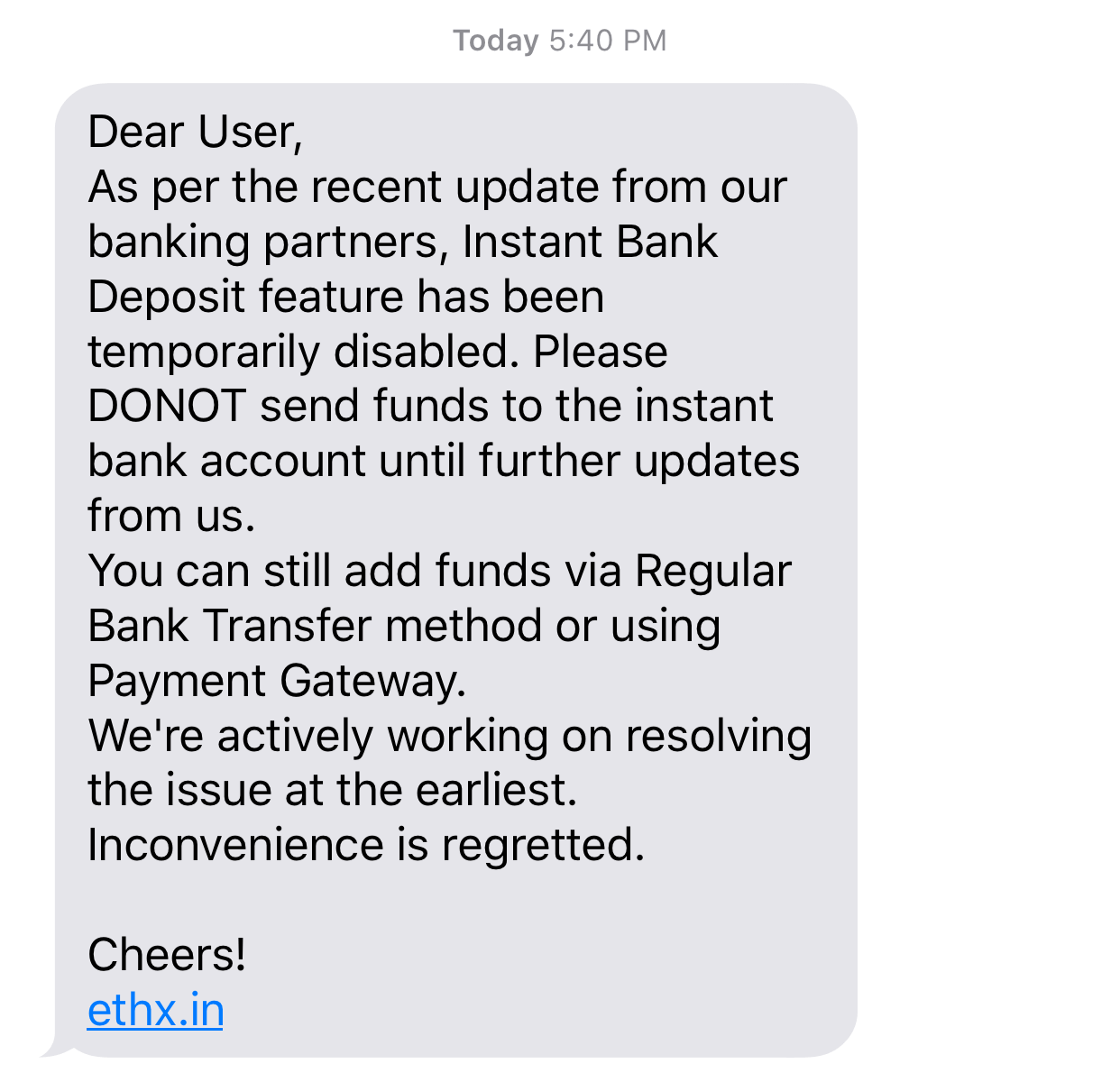 Writing “crypto payment” or using any cryptocurrency-related keywords such as Bitcoin, Ripple Ethereum etc in the ‘Remarks’ space appears to have created such payment delays, stated Atulya Bhatt, cofounder BuyUCoin. “As far as bank accounts are concerned, we have not received any call from our banks; however, we are facing issues while transacting through payment gateway.”

“The core issue lies with the government’s inability to control the flow. Yes, with KYC, we have the information regarding who is buying; however, once bought, a user can transfer the Bitcoin to any part of the world and no authority or exchange have the control over the same. The government suspect that some of the money is being deposited in the wrong hands. Perhaps, this is why some precautionary measures have been taken to control the transactions,” said Jabeer.

As reported by Inc42 last week, the Bitcoin traders had been asked to attend the office of the IT department to produce the books of accounts or the documents including – details of investments done by the traders during FY 2015-16, 2016-17 and 2017-18 along with supporting documents.

The Bitcoin traders had also been asked to provide the statements of all the bank accounts maintained by the HNIs personally, their family members and concerns associated with them.

The notice also mentioned that in case the person misses to attend or submit evidence or to produce the books of accounts or documents, a penalty of $156 (INR 10K) will be imposed under Section 272A( 1)(C) of the Income Tax Act, 1961.

After Cryptocurrency Exchanges, ICOs Next On The Government’s Radar

From various sources, Inc42 has also learned that the IT and ED departments are now closely watching the ICO developments in the country.

Speaking to Inc42, a Direct Tax lawyer at the Supreme Court of India on condition of anonymity stated “The IT department is currently suspecting most of the companies offering ICOs as shell companies. This is precisely because the valuation and investments made by these companies are highly debatable. The investments come under Section 56 (II), however, such companies or investors investing in terms of cryptocurrencies are not paying their taxes, as the valuation of many of these companies is not done by independent chartered accountants.”

On December 24, 2013, the RBI had warned users about the risks involved in Bitcoin trading. The same reminder has been released by the authority several times since then. On August 2, 2017, Interdisciplinary Committee on the legitimacy of cryptocurrency trading had advised the government to ban cryptocurrency completely.

MAS, the monitoring authority of Singapore has also warned users about the risks involved in Bitcoin or other cryptocurrencies’ trading. Some of the leading cryptocurrency exchanges that operate in India have their headquarters in Singapore.

Amid Bitcoin gaining huge popularity in India, almost a dozen cryptocurrency exchanges have been founded in the last couple of months.