Rivalling mega unicorns such as Unacademy, decacorn BYJU’S, and other edtech giants such as Vedantu and TestBook, PW has remained under the radar even during edtech’s heyday

PhysicsWallah posted profits of INR 6.92 Cr in FY21 on the back of a revenue of INR 24.6 Cr and is on track to hit $65 Mn in ARR in FY23, founder and CEO Alakh Pandey insisted

Having raised $100 Mn to enter the unicorn club, PW is looking to bulk up its test prep platform and take on rivals in the hybrid learning space

YouTube is a great leveller for education. At least that’s what Alakh Pandey, cofounder and CEO of India’s newest unicorn PhysicsWallah (PW) believes.

“Without YouTube, I could not have built my audience and the following that has allowed us to expand into a full-fledged platform,” Pandey told Inc42 a few weeks before the edtech startup announced the funding round that made it India’s 101st unicorn .

What’s most remarkable about PW is that the $100 Mn round from Westbridge and GSV Ventures is the first institutional round for the startup, which has been running in bootstrapped mode since 2014, but only launched an edtech app and platform in 2020.

Rivalling mega unicorns such as Unacademy, decacorn BYJU’S, and other edtech giants such as Vedantu and TestBook, PW has remained under the radar even during edtech’s heyday in the past couple of years. But it has now emerged as a rare profitable edtech unicorn in India.

Pandey claimed that the startup has been profitable since inception with positive cash flows and reserves, because of the focus on organic growth and supporting a large student base in a sustainable manner. 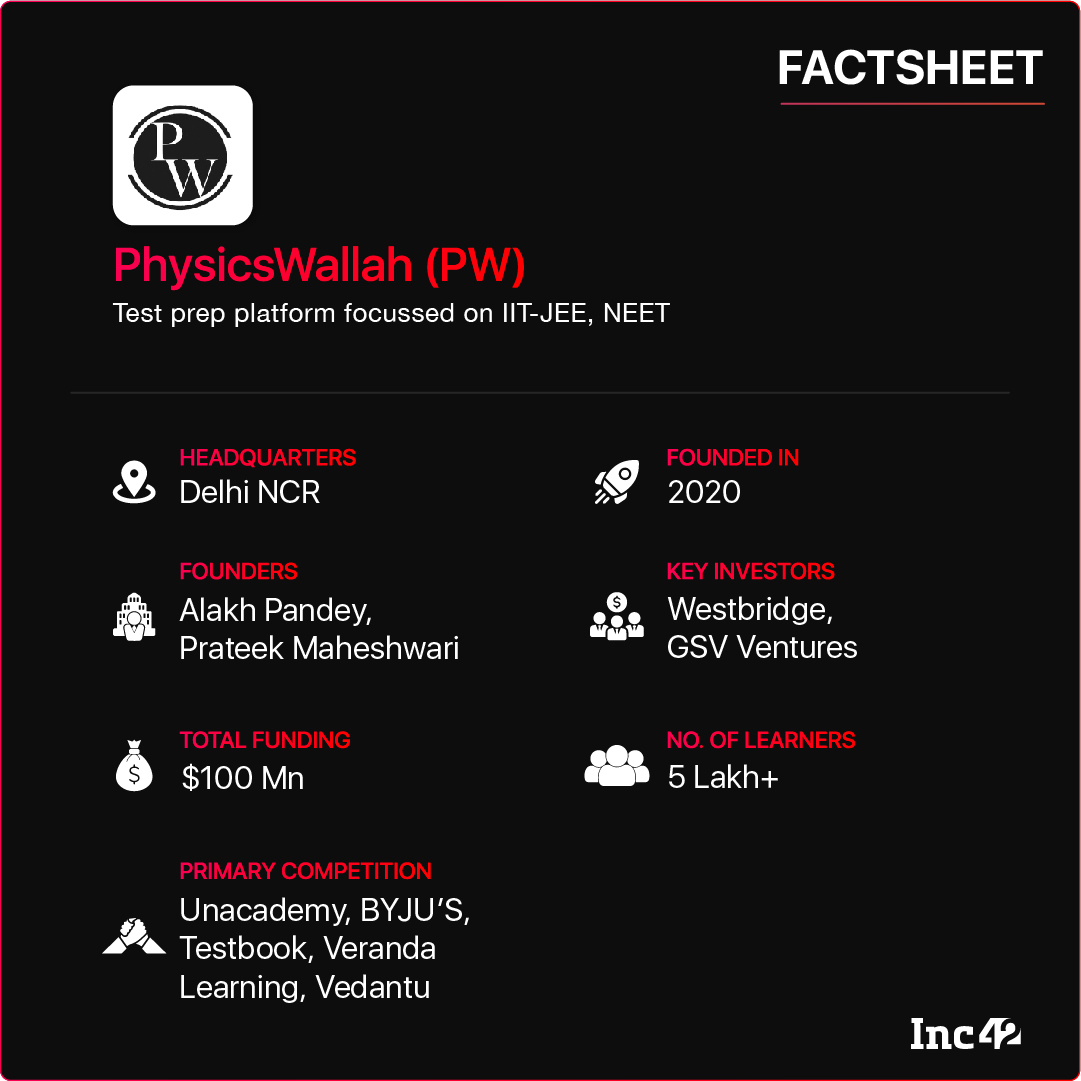 The Profitability Formula For PhysicsWallah

While we don’t know the latest financial performance of BYJU’S, the other profitable edtech unicorn as per 2019 figures, we know that PW nearly matched Unacademy’s revenue last year in FY22. BYJU’S has not reported its financials for the past two fiscals.

But what is not clear is whether this is revenue from ads on YouTube or whether this is direct revenue from sales of courses. PW did not clarify the breakdown of the income. We will update this story as soon as we find out more details on how the company has earned this money.

However, Unacademy spent more than INR 400 Cr on marketing, PW has done it all organically. Pandey said he was a solo entrepreneur for the longest time — going to Kota to buy the latest study material, preparing videos based on these books, editing the videos and managing the thumbnails and other analytics himself in the first couple of years.

Recalling the journey of how PW got here, Pandey said that he couldn’t take the formal IIT-JEE or NEET coaching route or go to Kota like thousands of students. “Right from my childhood days, I knew affordability and good quality teaching is lacking in India. Even though millions of students spend lakhs to enter colleges, many cannot.”

In school, Pandey began offering affordable after-school coaching for lower grades, which he continued in his college days, before jumping on to YouTube to solve the problem of reaching more students. He continued the offline coaching for seven years from 2010, before he ventured into online video in 2017, and the first year on YouTube proved to be a gamechanger.

Having seen some 10,000 students in his first seven years as a teacher, Pandey claims YouTube matched this in the first year itself. “I didn’t earn any money for the first year because I didn’t know that we can actually make money on YouTube.”

Interestingly, he added that money was never the objective for him at the time. Recalling that the first 10,000 subscribers brought him INR 8,000 in monthly income, he decided to double down. As he focussed fully on YouTube, the subscription for his channel skyrocketed. He claimed to be growing at 50,000 subscribers per month early in the second year and then one lakh subscribers per month soon after. “But if I talk about the money, in those days it was something like 17,000 per month when I was growing, and in the fourth month, I had hit INR 40,000.”

That’s when something clicked in his head. By 2020 PW was already the biggest channel for IIT-JEE on YouTube, the founder claimed. The growth on YouTube also attracted acquisition offers from edtech giants and students clamoured for 360-degree learning beyond just the focus on physics and some chemistry lessons. Pandey took to his channel to publicly turn down the offers and continue on the PW journey himself.

It was also in 2020 that Pandey was introduced to Prateek Maheshwari, who was running an edtech SaaS company at the time. For Pandey, this meeting came at a time when there was a clear inflexion point for edtech in India, with Covid hitting offline coaching hard. Of course, edtech giants stepped up to fill the gap, but the PW founder believed that this would only hurt the affordability of edtech solutions.

Edtech platforms boomed in the early months of the pandemic and fees were also increased, Pandey added. But PW decided to go a different route. Building on the YouTube channel’s success, the PW app began offering paid courses for an average price of INR 3,500, which can go up to INR 4,500 for certain courses and even as low as INR 500 for others.

This is significantly lower than what Unacademy and Vedantu or offline coaching classes charge. Plus, the PhysicsWallah pedigree also helped in grabbing the audience. The edtech unicorn has said that more than 10,000 of its students have cracked NEET and JEE in 2020 and 2021 at a time when Covid disrupted the education sector. This success has attracted more students through word of mouth, as is the norm in edtech.

Over the last year, with Maheshwari leading the product side, the PW app has added more robust edtech features such as a doubt solving engine, mentorship sessions from former students who are currently in the industry, scheduled learning, student polls and a backlog course for catch-up learning. In a market where live learning has become a norm, PW continues to go with offline recorded classes, because as per the company, this suits its target audience better.

While rival edtech startups can claim to have the students with the highest paying capacity in the country, PW is targeting an audience that is perhaps not as savvy and does not want high-end features, but just robust learning, Maheshwari added.

When it comes to student numbers, PW’s daily active user base is around 5 to 5.5 Lakh students per day. But the metric that Pandey is most proud of is the average time spent on PW. “The average time on our app is 1.5 hours. So 5.5 lakh students are spending 1.5 hours everyday. The competition cannot match this session time, even though they may have a higher student base.”

Overall, the PW app has 4 Mn users while its various properties on YouTube combined have over 10 Mn subscribers. In the past year, PhysicsWallah has also started marketing its platform more aggressively on social media ads to widen the funnel. Pandey claims that the conversion rate from YouTube to the PW app has been phenomenal, because students can see the value proposition.

Speaking of the competition, edtech giants are moving towards a hybrid future. Unacademy, BYJU’S, Vedantu have ventured into physical classes as well as online learning — so is PW also bound for this fate?

“To be honest, there is a lot of iteration right now in the market and it will take one or two years for the industry to decide which path to take. We don’t know what will happen, but a mix of offline and online is the future for sure.” – PW founder Alakh Pandey

PW’s rivals are also going through some turmoil and restructuring as in the case of Unacademy, Vedantu, Lido Learning and others despite these startups raising funds in the past year, and this is where Pandey feels the advantage is. Even though the market looks crowded, there’s space to target the grassroots audience that PW is going after, Pandey claimed. And PhysicsWallah’s (PW) edtech rivals are busy reorganising their operations. Other edtech startups such as Udayy have even shut shop.

The Delhi NCR-based startup has also launched offline classes in smaller cities, which are priced at 10X the average cost of online courses. Convincing students of the value of these physical classes will be the key challenge especially because so far PW has been an online-only entity.

Despite the current challenges in the edtech industry given that offline learning is roaring back, the online race will be determined by revenue momentum and sustainability. In the past, we have seen profitable bootstrapped companies lose their way after raising funds and trying to make a big splash in the market.

With the unicorn label, PW is now on the edtech radar, and the competition will be tailing it closely. For Pandey, the focus is not on revenue, but student base, which he aims to grow by 4X over the next year, thanks to the fundraise. He is bullish on the approach that has worked so far: “Don’t fix what’s working. The competition is trying all kinds of things, but we have a method that has delivered results. The fundraise will not change us.”