Edtech Startup Udayy Shuts Down; To Return About $8.5 Mn To Investors 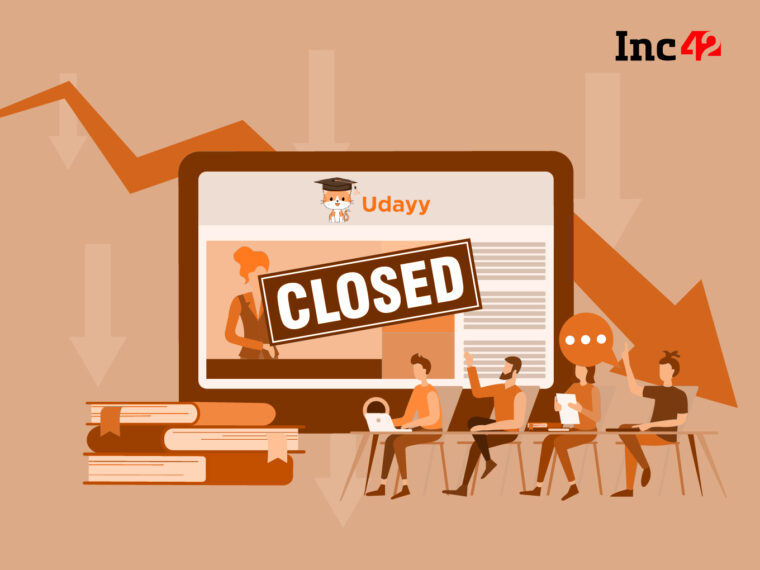 Udayy shut its operations in April and will be returning an amount of around $8.5 Mn to its investors

While the startup was doing well during the peak months of the pandemic, the reopening of schools slowed down the business, said cofounder and CEO Saumya Yadav

The company tested several other models, including exploring offline education centres, to sustain its operations but without any success

Gurugram-based edtech startup Udayy shut down its operations in April, three years after its inception in 2019.

The startup’s cofounder and CEO Saumya Yadav confirmed to Inc42 on Wednesday (June 1) that the business was shut down in April and Udayy will now be returning around $8.5 Mn to a few of its investors.

As per Yadav, Udayy was a pandemic baby and had not witnessed the world without the pandemic before. While it was doing well during the peak months of the pandemic, its business slowed down after the schools started reopening.

Founded by Yadav, Mahak Garg, and Karan Varshney in 2019, the core business of Udayy was offering live learning courses for children in grades between 1 and 5. Last year, the startup claimed it had users from over 45 cities and towns across India, with more than 400 classrooms being run on a daily basis.

Once the schools reopened and parents started spending money there, they had less willingness to pay for the online edtech platform. Besides, the students also didn’t have time or energy for online classes, Yadav said.

“So, we started seeing very high customer acquisition costs and low retention after the pandemic,” she added.

Udayy started seeing signs of impending troubles from July last year and tested several other models to sustain its operations. The startup explored opportunities in offline education centres, but later realised they were very expensive.

Besides, Udayy also launched a free app. It aimed to first scale the app and then monetise it. While the app saw a lot of traction, it was difficult to monetise it as people mostly spent time on it as it was free, Yadav said.

“We also evaluated partnering with schools where we realised that schools looked at edtech companies as their competition rather than a supplement,” she added.

As a result, Udayy had to finally take the decision to shut down, Yadav told Inc42.

The development was first reported by Entrackr, which said that the startup laid off over 100 employees, accounting for 100% of its total workforce.

In January last year, Udayy raised $2.5 Mn in its seed funding round led by Alpha Wave Incubation (AWI) and InfoEdge Ventures. It also saw participation from Better Capital, CRED’s Kunal Shah and other angel investors. In February this year, there were reports about the startup raising $10 mn led by Norwest Venture Partners.

As per Yadav’s social media handle, the startup had raised $13.5 Mn of institutional capital so far.

The edtech sector got a boost during the pandemic as schools and colleges were shut and students relied on online classes and courses for their studies. Driven by this boom, Indian edtech startups raised a total funding of over $6.1 Bn between January 2020 and December 2021. However, as the impact of the pandemic started receding and schools started reopening, these pandemic darlings started facing challenges.

In April, Bengaluru-based edtech startup Unacademy fired about 600 employees, including its on-roll staff and contractual educators, just a few weeks after laying off around 210 educators.

Some of the edtech startups like BYJU’S, Vedantu and Unacademy have also started focusing on offline education centres to compete in the new business environment.