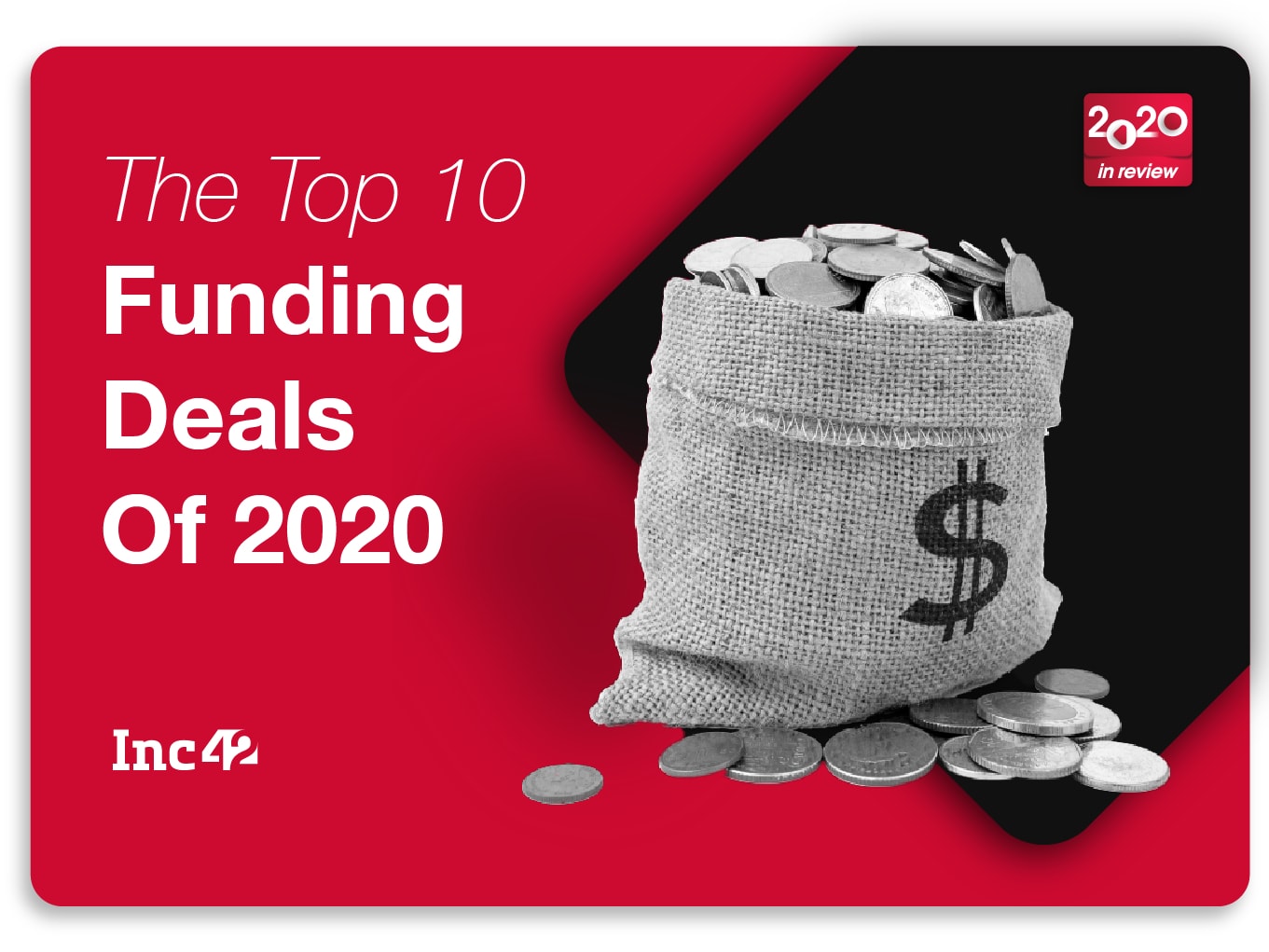 Fintech, edtech, and enterprise tech were the most popular segments for investors

While 2019 was a rollercoaster ride with massive developments in the startup ecosystem and stability in terms of funding growth, the year 2020 was more like a push from the cliff. The start of the new decade wasn’t a great one for the global economy, public mental health and everything else. As work-from-home, social distancing and virtual experience became the new reality, there has been a seachange in human behaviour as well as in business activities.

Interestingly, the year turned out to be a great one in accelerating digital adoption and bringing more meaningful users on the digital front. By May, India had crossed 500 Mn internet users, riding on the back of a surge of internet usage in rural regions. Apart from that, users were also a little less skeptical of trying digital services and products as a pandemic.

This led to a greater demand for fintech, edtech, enterprise tech, consumer tech and ecommerce solutions. This is also reflective of the interest the investors have taken up here.

The Funding Deals That Made Waves

Founded in 2015 by Burzin Engineer, Rahul Chari and Sameer Nigam, PhonePe set its mark on the Indian payments segment after it got acquired by ecommerce giant Flipkart within five months of incorporation.

PhonePe started off as a digital payments player, but now it has spread its wings to include several financial services like digital insurance, lending and more. While the company’s growth in the digital payments domain is undoubtedly exponential with more than 40% market share as per various reports, it also claims to be the fastest-growing digital insurance distributor in India.

The company has about 250 Mn registered users with over 100 Mn monthly active users, generating nearly 1 Bn UPI transaction. The company is neck-and-neck with Google Pay in the race for UPI apps. The duo cumulatively accounts for over 80% of all UPI transactions in India.

Just like its parent company Flipkart, PhonePe too is working aggressively to go public by 2023 as a separate entity in the US or India, eyeing a valuation of $7 to $10 Bn. The company is currently valued at $5.5 Mn and has raised $850 Mn from Walmart and Flipkart.

As India stepped into a lockdown, edtech became the first choice for many investors looking to create an impact on the ecosystem. Over $1.43 Bn has been invested in edtech startups in the past 12 months.

BYJU’S continued its bull run after raising about 57% of the total funding raised in the segment. The company, which was valued at around $6 Bn at the end of 2019, managed to double its valuation to $12 Bn after the funding round on Nov 21, 2020.

The company utilized this funding to make one of the biggest acquisitions of 2020 in the form of WhiteHat Jr, but also to widen the gap with its competitors.

Since the lockdown, it has added over 25 Mn new students to its platform. Overall, it has a user base of 75 Mn students with 4.2 Mn annual paid subscribers. BYJU’S is not only the biggest edtech startup in terms of its valuation but also in terms of its user base.

Going beyond, the company has also provided its effective business model with two straight years of profitability. The company turned profitable in the financial year 2019, and recorded a 2x growth in FY2020 to record a revenue of INR 2,800 Cr.

The year 2020 was particularly a tough one for OYO, which had set its eyes on sustainable growth and profitability. By March, the company suddenly found itself deprived of most revenue as the entire world was crippled with the pandemic. OYO’s operations across 800 cities in 80 countries were all adversely affected with no signs of recovery.

The pandemic had brought OYO to a break-even point, reducing its revenue and expenses both to only $30 Mn per month. Even CEO Ritesh Agarwal, in April, came on record to confirm that OYO’s revenue and occupancy rate had dropped to 50%-60%. OYO’s 2020 was filled with layoffs, furlough and the instincts to survive. The company gave up its office spaces, revamped new business plans and put together a revenue-sharing model with partner hotels to make things work.

Despite the downfall in 2020, OYO bagged one of the biggest cheques this year. The company raised about $806.75 Mn from existing investors SoftBank and founder Agarwal-owned RA Hospitality Holdings. The hotel and hospitality startup has also managed to maintain its valuation of $10 Bn in the eyes of the investors, hinting towards a brighter future for the company.

Bulking Up For A Stronger Market: Zomato

2020 started with a bang for this food aggregator business. First, it was the $150 Mn fundraise from ANT Group and then the acquisition of UberEats’ India business. The year was set to be a great one for Zomato before the pandemic hit too close to home. Zomato, just like its competitors Swiggy, noted a drop as the skepticism rose amongst its customers.

The companies made all efforts to gain back the customers’ trust, and get a much stronger hold on the market once again. Zomato, in August, announced that it had recovered 85% of its pre-Covid GMV (gross merchandise value) and the order value had also increased 20% over pre-Covid levels. The pandemic may have caused a temporary drop, but it has opened doors to a much bigger market as several customers got accustomed to food ordering.

Even restaurants realised that dine-in service has to go hand-in-hand with food delivery. In some cases, cloud kitchens also become a preferred way to ensure survival at minimum expenditure. Restaurants were on the lookout for alternate sources of revenue as dine-in services remained shut, and food aggregators were all ready with their platforms and wide reach.

Firstcry turned out to be a pleasant surprise in the unicorn club this year. The baby-product marketplace started its journey back in 2010 and has grown to expand its user base to over 4 Mn, offering 200K baby and kids products across 2,000 brands. It has a retail presence in over 300 stores spread across 125 cities.

The only thing FirstCry lacks is profitability, which it will be tackling in 2021. The company claims that it is very close to achieving profitability and its cash burn is quite low. In terms of revenue, FirstCry recorded INR 535 Cr in FY2019. It was expecting a 4x growth in FY2020 with a revenue of INR 2,033 Cr, according to its regulatory filings of February 2020.

FirstCry has raised about $428.4 Mn across multiple rounds. The company last raised $296 Mn (INR 2,120 Cr) in Series E funding round Softbank’s Vision Fund reportedly at a valuation of $1.2 Bn.

There is not even the slightest doubt on which startup made an impression on the globe this year. While BYJU’S had set a milestone by sponsoring the Indian cricket team’s jersey in 2019, Dream11 raised the bar by becoming the title sponsor of IPL 2020, which earned the company plenty of media coverage automatically, but also a lot of new users from around the world.

This glory is coupled with Dream11’s position in the Indian fantasy gaming segment, with more than 100 Mn users. The company’s closest competitor MyTeam11 has about 15 Mn+ users, while HalaPlay is reported to have 9 Mn users.

It took only five years for Car24 to become the first transport tech company to make it to India’s hallowed unicorn club. Cars24 allows consumers to simply book an appointment with any of its franchisees and sell the car on the first visit at a fair price.

The company has relied on the franchise model to expand and scale up its presence across 130 cities in Tier 2, 3 and 4 cities and towns. It claims to have over 10,000 channel partners registered on its platform and aims to expand its network to 20,000 partners and 300 cities by 2021.

While the transport and mobility sector was struggling to survive, Cars24 witnessed an uptake. With annual transactions exceeding 2 Lakh units and a 4x increase in website engagement, the company claims to have surpassed pre-Covid levels in the third quarter of 2020.

This growth has walked the company into the unicorn club as DST Global and existing investors jumped in to invest in its Series E round. Cars24 raised $200 Mn in November 2020.

The beauty and wellness industry was hard hit by the pandemic and it is now more important than ever to bring more innovative tech solutions to eliminate unnecessary face-to-face interactions wherever possible. Catering to this need is Zenoti, which entered the unicorn club with a $160 Mn Series D round.

The ten-year-old company provides a cloud-based backend service such as appointment booking, payroll of employees, inventory management and managing financials for cloud-based software for salons, spas, and medi-spas. It also has products for billing, marketing, CRM, and loyalty features.

The company has been powering more than 12,000 businesses in over 50 countries. The company claims to have over 100% year-over-year growth in 2020. It records over 76 Mn bookings through the platform annually. It has close to 9 offices in the USA, India, UK, Malaysia, UAW, Philippines and Australia.

Basking in the glory of online learning this year, Unacademy became the second edtech startup to enter the unicorn club. The company’s valuation grew nearly 5x from $400 Mn in February to $2 Bn in November. The successive jumps in valuation are in tune with the rise in the number of registered users on the platform.

Unacademy had around 13 Mn registered users at the beginning of February, but that grew 3x to 40 Mn in the court of the next nine months. It now has about 350K paying subscribers and more than 47K educations on its platform, teaching in over 14 Indian languages across 5K cities.

Over 150,000 live classes are conducted on the platform each month and the collective watch time across platforms is over 2 Bn minutes per month. Unacademy’s revenue improved 3.19x to reach INR 21.89 Cr in FY2019, but with a 3.8x increase in losses to INR 90.27 Cr.

Another Entry To The SaaS Unicorn Club: Postman

The Indian enterprise tech sector is one of the hottest sectors at the moment and the software-as-a-service (SaaS) sub-sector is growing exponentially in both India and abroad. The biggest stakeholders in the segments believe that India is moving from a service nation to a product nation and the apprehension to buy from Indian SaaS companies is fading away.

Postman is one of the success stories of an Indian SaaS startup that scaled operations to countries like the US while giving stiff competition to major tech corporations. It claims to have more than 11 Mn developers across 5,00,000 organisations.

The company helps developers and companies supercharge their application programming interface (API) workflow. Its extension on Chrome is the most efficient way to test, develop, and document APIs. The startup also helps to create complex requests, go back in time, and view results easily.

It began as a side-project in 2012 when Ankit Sobti was working at Yahoo. He officially launched the company in 2014 along with Abhinav Asthana. Later, Abhijit Kane joined in as the third cofounder. The company has raised $208 Mn to date.