Why Top Edtech Players Like Unacademy, BYJU’s Have Their Valuations Growing At Breakneck Speed

Why Top Edtech Players Like Unacademy, BYJU’s Have Their Valuations Growing At Breakneck Speed 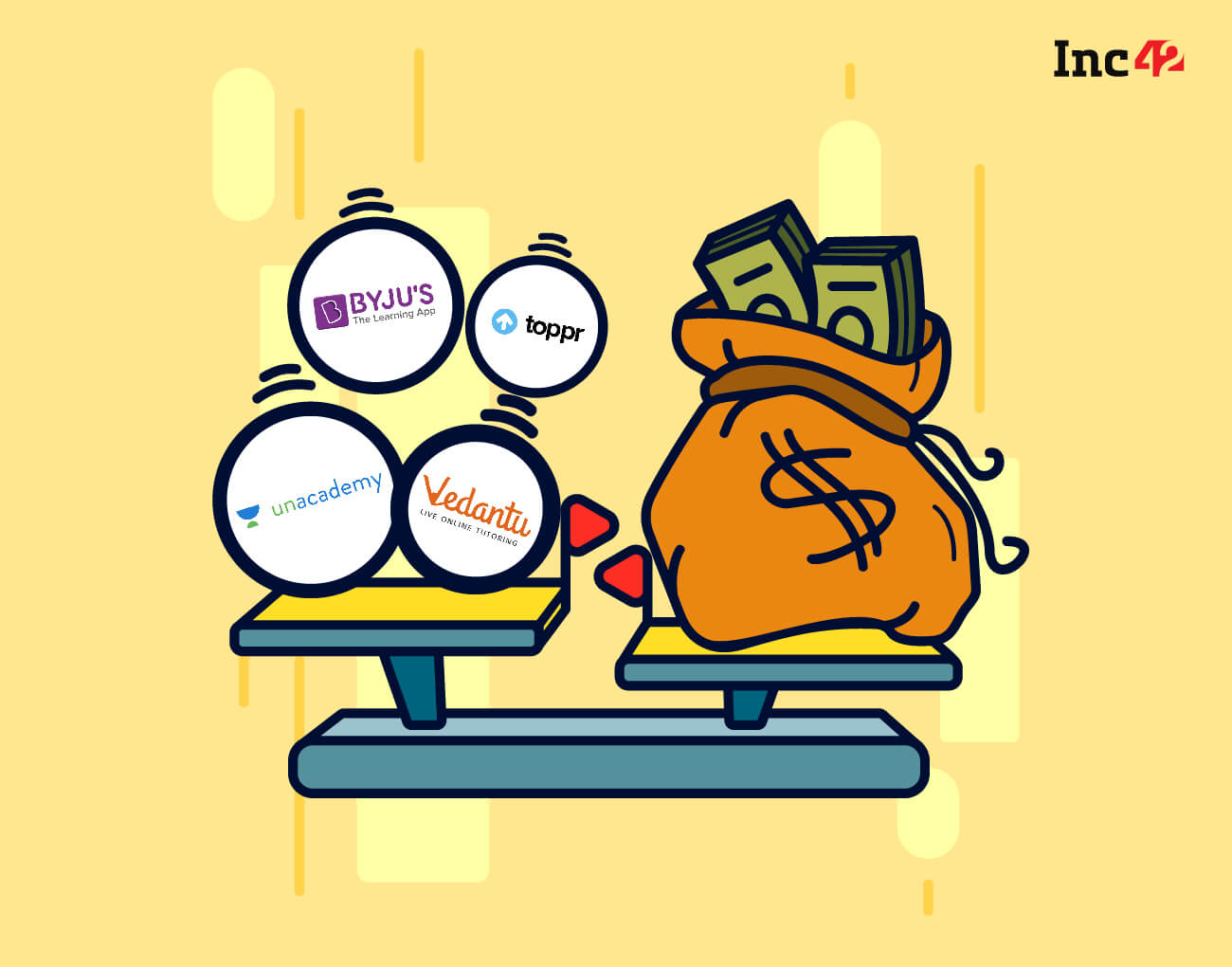 India’s edtech startups have raised billions of dollars in 2020 on the back of growing demand, but the pandemic-driven needs are not the only reason behind the windfall

Many of the top edtech startups, including BYJU’s, Unacademy and Vedantu, are doubling down on K-12 live classes which may lead to higher customer acquisition costs

The beginning of 2020 was a big bang year for the edtech startups in India. Last week, Bengaluru-based edtech startup Unacademy saw its valuation touch $2 Bn after a funding round led by New York-based investment firms Tiger Global and Dragoneer Investment. This was a 38% markup from its $1.45 Bn valuation just two months ago when Unacademy raised $150 Mn, led by Masayoshi Son’s SoftBank.

Multiple industry sources that Inc42 spoke with peg the latest fundraising by Unacademy anywhere between $80 Mn and $100 Mn although the startup did not disclose the amount. But the story here lies in the successive markups in the valuation of Unacademy in 2020. In February this year, Unacademy’s valuation hovered around the $500 Mn mark after it raised equity financing from global behemoths such as Facebook, General Atlantic, Sequoia Capital and others. Post that funding, the five-year-old edtech startup’s valuation had more than doubled in just nine months.

BYJU’s was valued at around $6 Bn at the end of 2019, but by the end of 2020, this number has doubled, much like Unacademy’s soaring valuation. But a quick look at the financials of both firms may put things in perspective.

Unacademy, on the other hand, reported a 3.8x increase in losses at INR 90.27 crore in FY19, but its revenue improved  3.19x to reach INR 21.89 Cr. Much of this revenue came from the company’s subscription model, launched in April 2019. As of now, the startup claims to have around 350K paying subscribers. Such high growth rates should be a good sign for the investors concerned, as well as the edtech segment, leading to attractive metrics and impacting valuations, say multiple investors and management consultants who track the edtech space.

Interestingly, it has been happening for some time now. Global investors had been paying premiums and raising the valuation of India’s edtech startups much before the coronavirus pandemic hit the country’s schools and colleges. As discussed before, Unacademy and BYJU’s, as well as Bengaluru-based Vedantu, raised stellar funding rounds in February this year and their valuations saw significant markups.

It also indicates that the latest edtech investors in India are willing to stay invested on a long-term basis and they are convinced about the maturity of the segment. A month after these funding rounds, India went into lockdown 1.0 and most of the educational institutions are yet to open. Has this helped edtech platforms as never before?

Does The Edtech Race Have A Finish Line?

Soon after the March lockdown, BYJU’s, the most-valued edtech startup in India, said it would provide some of its content for free to school children. Many other startups followed suit. But its decision to make some content free did not threaten BYJU’s competitors even though the company claimed that at least 6 Mn new students had joined  the platform within a few weeks. BYJU’s strategy failed to have the desired impact on its competitors such as Vedantu, Toppr and Unacademy mostly because they have built their business models around live online classes for both K-12 and competitive exams. BYJU’s entered the live-classes space only after the pandemic struck.

Until April 2020, BYJU’s only had pre-recorded classes and a doubt-solving module on its platform. But thanks to the pandemic, most of the students were compelled to stay at home, and the ‘live learning’ format could not be ignored any more. But there is a particular reason why BYJU’s initially shied away from it.

According to several investors and management consultants who have worked with edtech startups, the customer acquisition cost (CAC) for pre-recorded models can be recovered the moment the product is purchased. But when it comes to live classes with a subscription model, the metrics work differently.

“BYJU’s started as a content company where the biggest direct cost was its sales cost. But that business model does allow for high gross margins. In the case of the live tuition (classes) market, on top of the sales cost, there is a cost of teacher and video streaming. For these models the recovery of the entire CAC (customer acquisition costs), will take longer at a customer level. However, at the same time, live tuition will lead to better learning outcomes especially when the classes are held in smaller batches ,” says Rahul Chowdhri, an investment professional at Stellaris Venture Partners.

Thanks to its capital and resources, BYJU’s took only a month to develop and launch a pilot in April. Since June, the live module has been available for classes 4-12 and also for several competitive exams such as the JEE and the NEET. It is not a shift in BYJU’s business model but more of feature addition.

Months after the initial round of fundraising in February (by BYJU’s, Unacademy and Vedantu) and their zealous focus on live classes, India’s edtech startups have entered a high-growth phase. Now, this segment is on a par with the consumer internet categories with a fast-growth appeal where the top two or three startups continue to see a mind-boggling rise in valuations after each funding. The last time such a funding spree came by was in the food delivery segment, which is now left with only two players after many came and exited unceremoniously. Yet, investors and consultants who have delved deep in the edtech space are adamant that the segment’s growth and valuations go hand-in-hand (read consistent).

“Historically, you can draw parallels to how ecommerce or food delivery or fintech played out,” says Anurag Ramdasan, Principal at the VC firm 3one4 Capital. “Generally, in a perceived growth market, larger investors are willing to back a player that is positioned to be among the top two or three, even if it means paying a premium for the opportunity. Given how much growth potential exists in this market, a small premium is easily justified. It will eventually drive the valuation of the top players in the space.”

Live classes offered by edtech companies are increasingly considered a practical alternative to offline coaching classes, and startups like Unacademny and Vedantu are expected to double down on the model. Their success may have a mirror effect across segments and more edtech companies could be betting big on interactive live classes.

But on the face of it, the growing competition looks like a mad race with no finish line. Edtech firms are essentially racing to capture students from class 6 onwards or even target the lower school because ‘live class’ providers would want to teach every student for at least eight to 10 years as it will lead to higher ARPU.

“Increasingly K12 and Test Prep companies are becoming horizontal players with presence across K12 curricular and non-curricular space and multiple verticals within Test Prep. The strategy is to extract a higher LTV from the students by addressing their needs starting from school exams to various kinds of tests be it IIT-JEE, Medicals for which students prepare along 11th and 12th classes or exams like professional certifications, bank exams, government exams, which are after graduation,” says Varun Gupta of Avendus Capital, an advisory firm that has clients in the edtech space.

Such a long-term student retention strategy would require huge capital, most of which is expected to be gobbled up by marketing. But there seems to be no shortage of funds for top edtech companies as revenue metrics become more attractive for investors.

“I think it is fairly well established at this point that edtech has a relatively higher ARPU compared to other verticals. The pandemic made a big difference with a massive drop in CAC in the short term. And that made it very easy for startups to be incredibly aggressive and chase the right kind of growth. While the CAC aspect may change due to lockdown reversal or hyper-competition, a high baseline in ARPU will be here to stay,” says Ramdasan of 3one4 Capital.

As mentioned earlier, India’s edtech segment is increasingly attracting strategic capital not only from venture capitalists but also from late-stage and structured investors such as hedge funds, private equity investors and asset management companies. However, the major chunk of this capital is going to the top three players – BYJU’s, Unacademy and Vedantu.

The Byju Raveendran-led eponymous edtech startup, which received fresh funding of $1 Bn-plus this year, has already made six acquisitions till date. In August 2020, BYJU’s spent $300 Mn to acquire WhiteHat Jr, which is considered the biggest M&A transaction in India’s edtech space until now. Unacademy has also spent more than $55 Mn in 2020 to buy out Coursavy, Mastree and PrepLadder.

According to market observers and investors, an acquisition spree is on the cards in this segment, and startups with Series A or B funding are expected to become target companies for the top three or four edtech firms which continue to raise capital.

“With heavily capitalized leaders, a lot of M&A activity is expected to happen in the EdTech space over the next few quarters. Expansion into newer verticals, deepening capabilities and strengthening top-of-the-funnel engagement will be the key drivers for M&A activity. There are active M&A conversations in the market.,” says Gupta of Avendus.

Currently, K-12 and test preparation are the most active segments in terms of fundraising. According to Inc42’s Edtech Opportunity Report 2020, the combined sector is expected to cross a net worth of $1.2 Bn by 2021. Moreover, during FY2014-2019, test preparation startups such as BYJU’s, Unacadeny and Vedantu raised $1.4 Bn out of a total $1.8 Bn in funding.

As schools continue to conduct classes online, the K-12 segment is slowly warming up and the test-prep startups mentioned above do not want to miss out. So, the smaller edtech firms already present in K-12 space are likely to become their acquisition targets. The next million users in Indian edtech will not just include those preparing for competitive exams but also school students who may have varying requirements, and edtech will have to adapt quickly. Hence, the focus on acquisition.

“In the future, there will be some degree of convergence between live classes and pre-recorded content. But five years down the line, these edtech companies will be vastly different in the way they are addressing the problem because (school) students’ requirements are entirely different from those preparing for competitive exams. Therefore, for each brand, including the large players, there will be a different reason for existence,” says Gupta of Avendus.

While some students will be fast learners with the capacity to learn from pre-recorded content, others will require specialised coaching, extra classes and doubt-solving, which are currently offered by traditional coaching centres.

Then there are apps which can be seamlessly integrated with the teaching process at schools. For example, Bengaluru-based Quizizz, funded by Nexus Venture Partners, offers an interactive learning approach using flashcard quizzes. Better still, teachers themselves can design these quizzes to make curriculums more engaging.

Smaller startups focussing on extracurricular and co-curricular activities such as personal development or coding may also become acquisition targets. BYJU’s acquisition of WhiteHat Jr and Unacademy’s acquisition of Mastree (it offers communication skills training for K-12 students) have already underlined this trend.

“K12 and Test Prep companies are increasingly focused on deepening their capabilities to become more mainstream and strong replacement options vis-à-vis offline coaching. For this they have to comprehensively address student requirements from live classes, doubt-solving, test series and b) increase focus on student outcomes. In future EdTech companies will also have to market their student outcomes just like in the traditional offline coaching (centres),” adds Gupta.