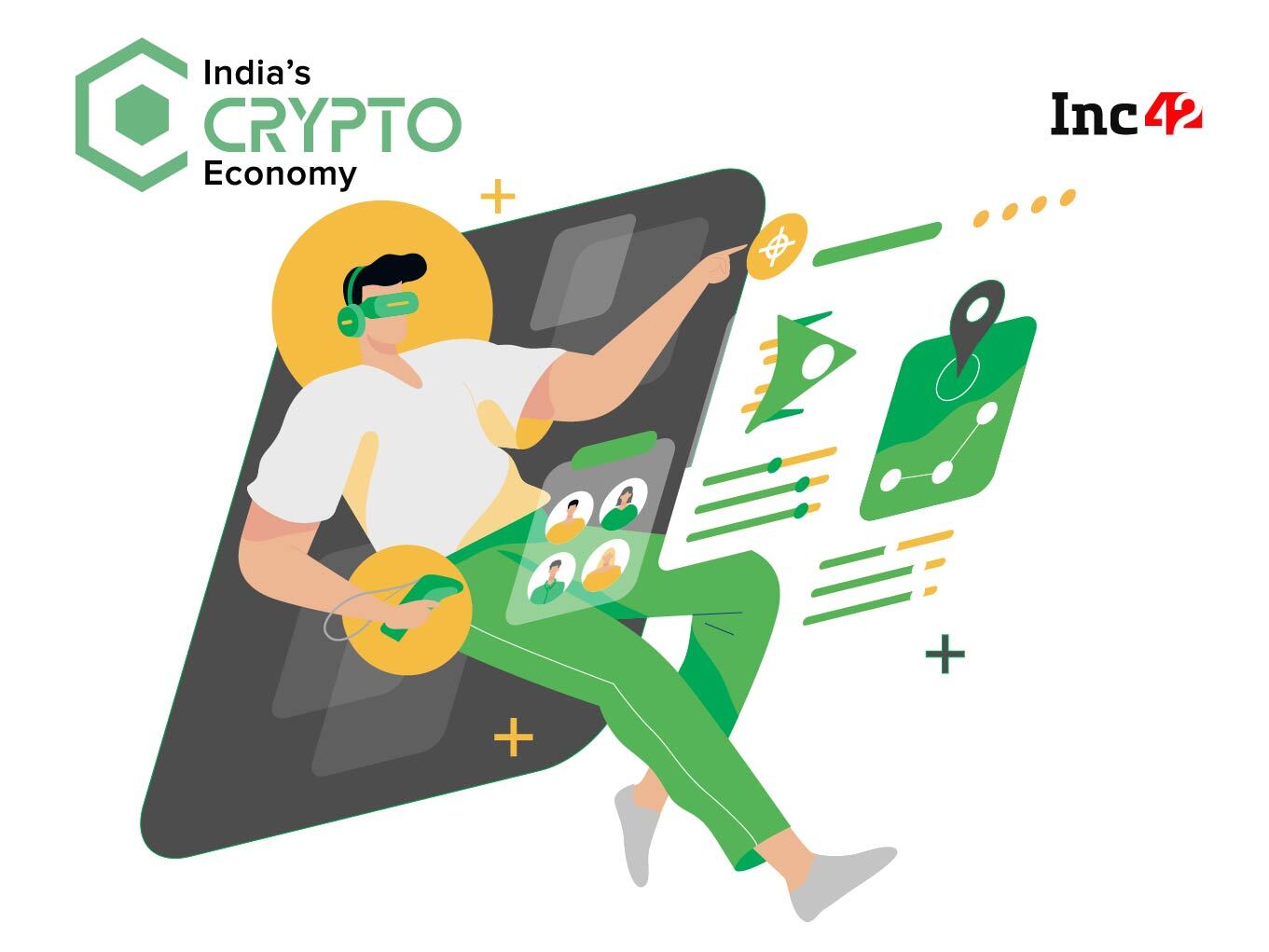 With big tech companies working on it to grab first-mover advantage, the metaverse is set to become a trillion-dollar opportunity in the next one decade

Did you watch the movie ‘Free Guy’ that explores the metaverse? Cast in the role of a non-player character 🎮 (an NPC in a game is a character that cannot be controlled by players), lead actor Ryan Reynolds observes, “I may not be real. But for a second there, I felt pretty alive.”

The AI character later becomes the hero of the game and says, “Anyone who wears sunglasses are heroes.” 🦸🏼‍♂️

No, we are not trying to present a heady brew of the profound and the trivial from a virtual world. Our aim is more mundane. We simply want you to know that going forward, smart glasses may unlock the metaverse for you to explore and enjoy. 🕶

But before we enter the techno-realm of the metaverse, let us take a quick look at the key highlights of the week from the world of crypto.

What’s Brewing Inside The Techno-Realm ♨️

Of late, the reality of the metaverse has hit us hard. Yes, we had discussed the techno-realm in this space and tried to gauge how it would revitalise the gaming world. But within a short span, huge investments have poured into the metaverse projects, and the MAGMA (Meta, Apple, Google, Microsoft and Amazon) companies are working on it feverishly to capture the lion’s share of the market.

In fact, they want to do it by proving they have the first-mover advantage. So, this is the right time to reopen the meta chapter and take another look at the ground realities of a virtual world.

📲 Hang On, What Is Metaverse? Metaverse has been defined as a virtual world, an extension of one’s physical self, so that people can meet, play games with each other and can do more stuff virtually.

📈 What’s This Buzz About A Big Opportunity? The market size of the metaverse was $47.69 Bn in 2020, and it is poised to grow at a CAGR of 43.3% to reach $828 Bn by 2028. However, many believe if included the metaverse ETF too, the market size may touch trillion dollars or thereabouts by that time.

Now that the metaverse has become a reality, funds are flooding the ecosystem. Hong Kong-based metaverse startup Sandbox recently raised $100 Mn Series B. And the startup’s SAND token has already hit a $2.46 Bn market cap. 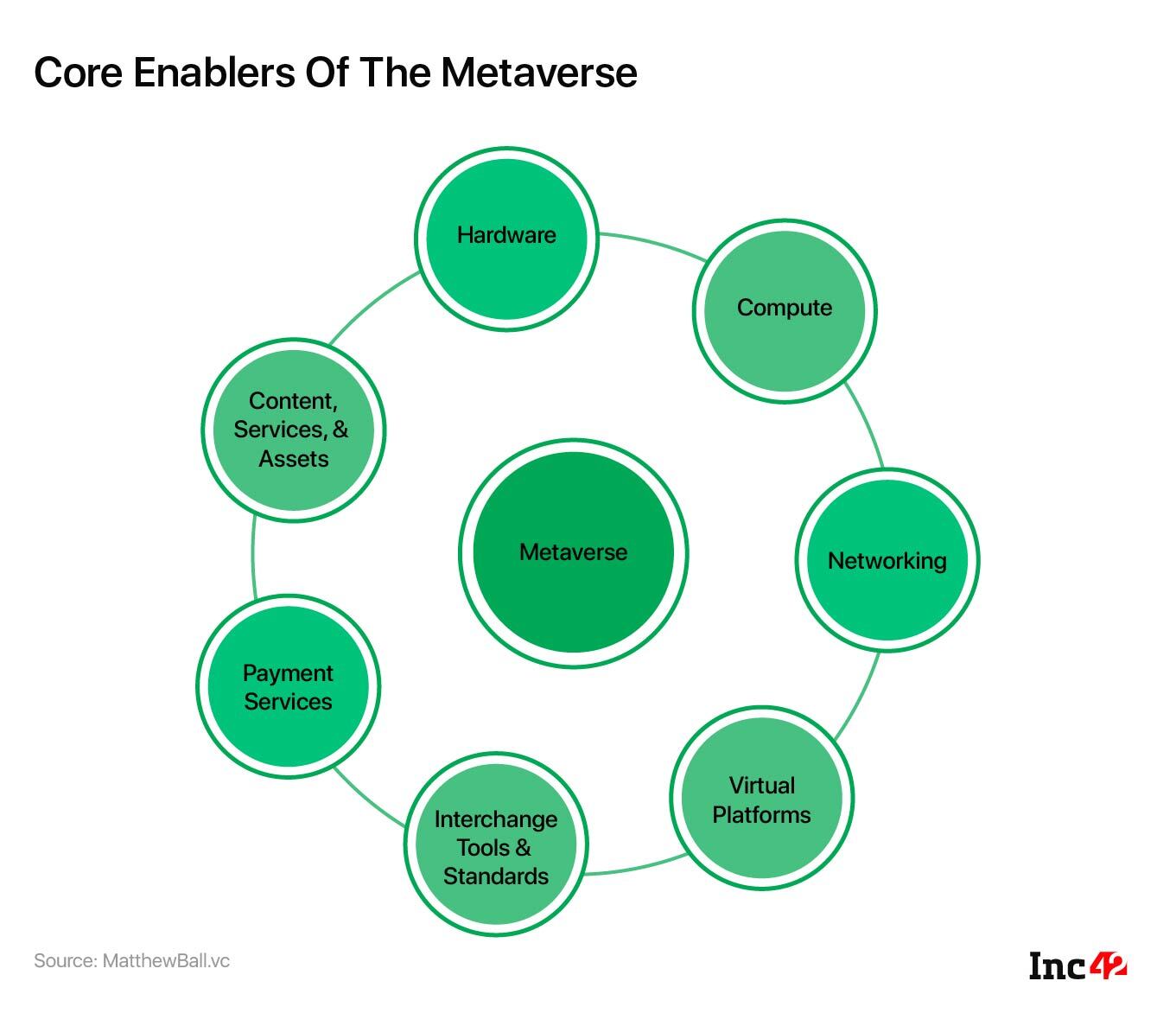 Ⓜ️ The Big Players: Facebook’s metaverse planning started in 2014 when it acquired VR headset maker Oculus Rift for $2 Bn 💰. The social media giant has rebranded to Meta, a social technology company. It has also announced plans to hire 10,000 highly skilled people in the next five years across the EU.

Meta will also invest $50 Mn in global research and programme partners to build its metaverse projects. Besides, it is planning to launch a retail chain worldwide to introduce people to metaverse devices such as VR headsets, AR glasses and more.

💻 Microsoft, too, has jumped on the bandwagon and announced its plans to introduce Mesh, a collaborative platform for virtual experiences, directly into Microsoft Teams by 2022. Mesh will also use metaverse avatars for this.

🤝 Partners In Development: To build the metaverse at scale, Meta has already collaborated with a slew of nonprofit, government, cultural and other organisations. Here is a quick look at the key partners in development and how they will help. 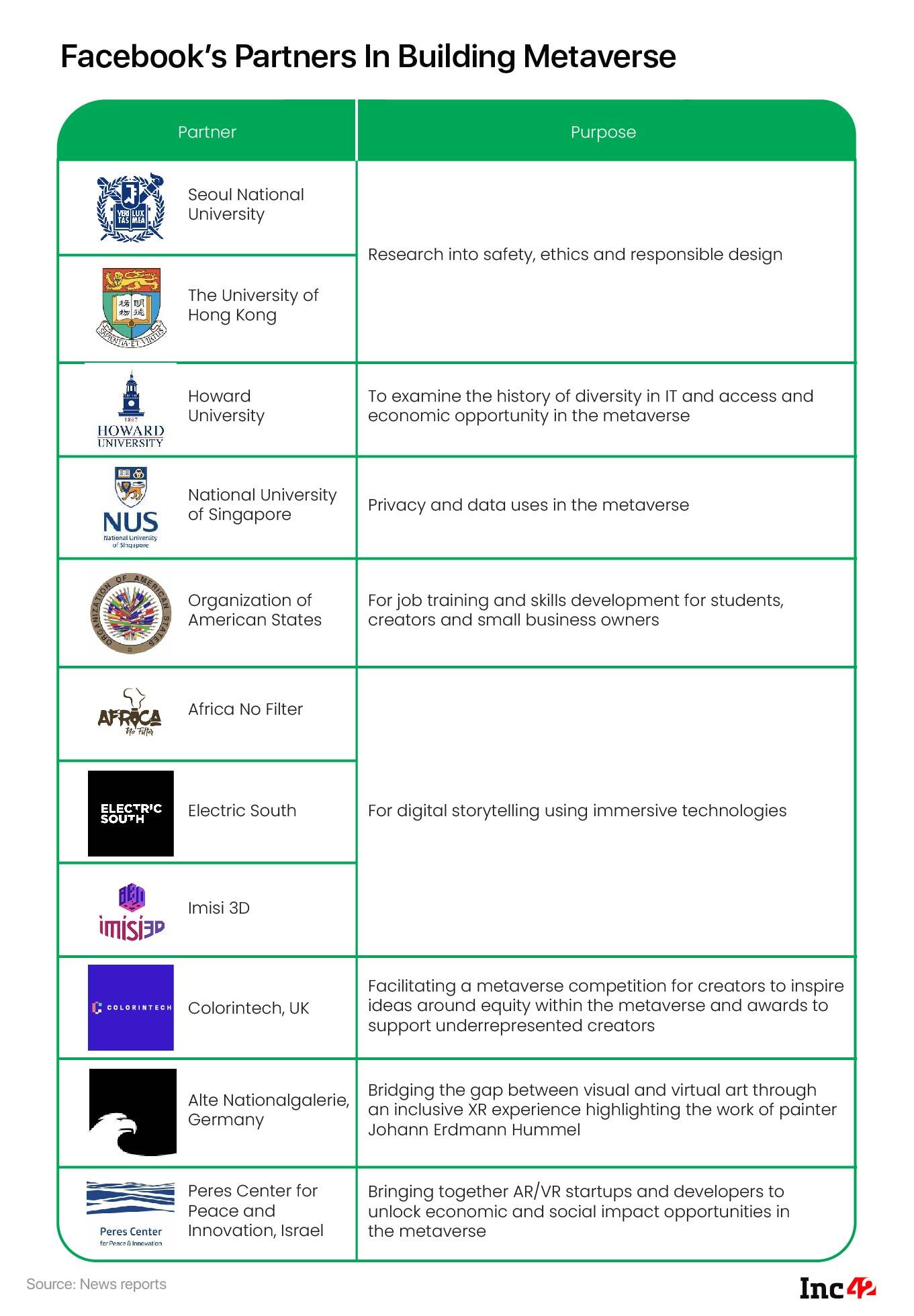 🔀 Crypto’s Role In The Metaverse: It will be key to metaverse transactions and hopefully end the diktats of Apple and Google that currently charge 30% and 15% commissions, respectively, from the apps listed on these platforms.

Matthew Ball, a leading metaverse investor and partner at various funds, says, “Blockchain-based revenues will be irresistible. And they look likely to continue over at least the medium term. Every trendline is growing: The number of NFT developers, the number of active wallets, transactions per day, primary sales, secondary sales, the market value of NFT franchises, etc. Everything.”⚡️

According to him, blockchain standards look like the best way to bring today’s major games, gaming platforms and brands to the emerging metaverse. While companies like Activision Blizzard and Take-Two Interactive may recognise the potential of open economies and platforms, they are unlikely to enter any system managed by competing platforms like Valve and Epic, as they pose too many strategic and financial risks. ⚠️

Then again, the legendary actor-director-producer Kamal Haasan has tied up with Fantico, a licensed digital collectibles platform, to launch his digital avatar as a non-fungible token (NFT) in a metaverse where Fantico will launch a game based on him. 🎮

Also, there have been recent developments 🗞 around Web 3.0, blockchain, NFTs and metaverse avatars. But as the big tech companies aim to grab the biggest market chunks by making early forays into the metaverse, the Indian tech startup community must go beyond avatars, exchanges and NFTs and create lasting value for a truly borderless population. 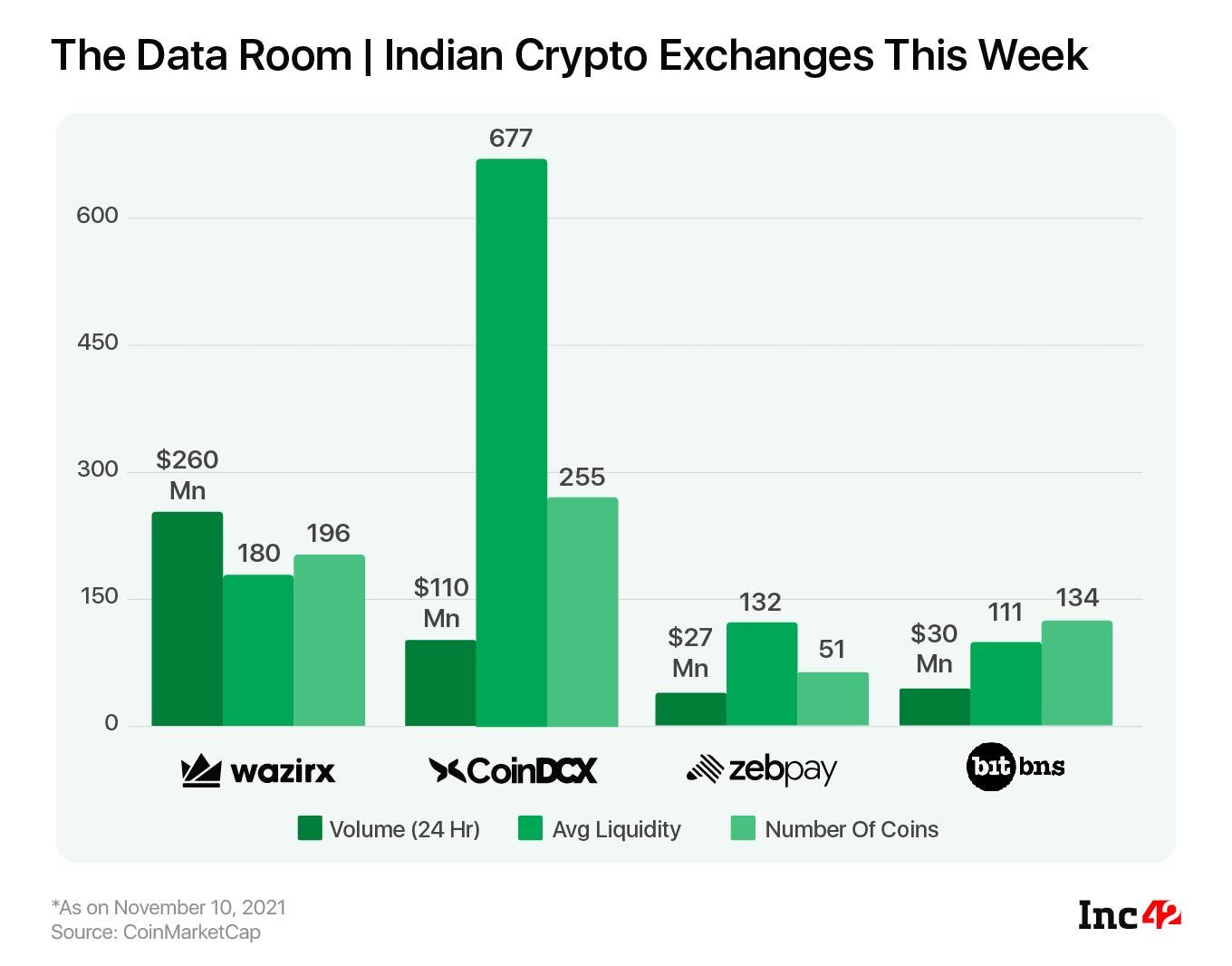 🔎 A Framework For The Metaverse: In this article, Matthew Ball explains the evolution of the metaverse, its protocols and most importantly, the key enablers of the new virtual world.

🌐 Bitcoin’s Taproot Upgrade: After a stretch of four years, bitcoin is set to go through its first major upgrade — Taproot. The upgrade is poised to make bitcoin more smart contract-friendly and will ensure significantly faster, cheaper and safer transactions.

Currently, crypto forms a small part of the financial ecosystem, including banking, insurance, equities and payments. Going forward, is finance going to be a part of crypto? At least AngelList’s founder-CEO and investor Naval Ravikant thinks so. 🤔

↔️ Belfrics’ Relaunch: The Belfrics Group would relaunch its exchange in India and offer a total of 25 coins for trading in the beginning. The plan is to open 20 independently owned physical outlets to target up to 200 potential clients.

💢 Apple CEO Tim Cook Owns Crypto: After Elon Musk, Apple’s Tim Cook acknowledged buying cryptocurrencies for the first time. Cook said that it wasn’t done on any investment advice. In fact, he had done some research on crypto as he was interested in it for “a while”.