Six startups entered the unicorn club this week, taking the total to 51 unicorns till date

Overall, $2.3 Bn was invested in Indian startups across 34 deals this week 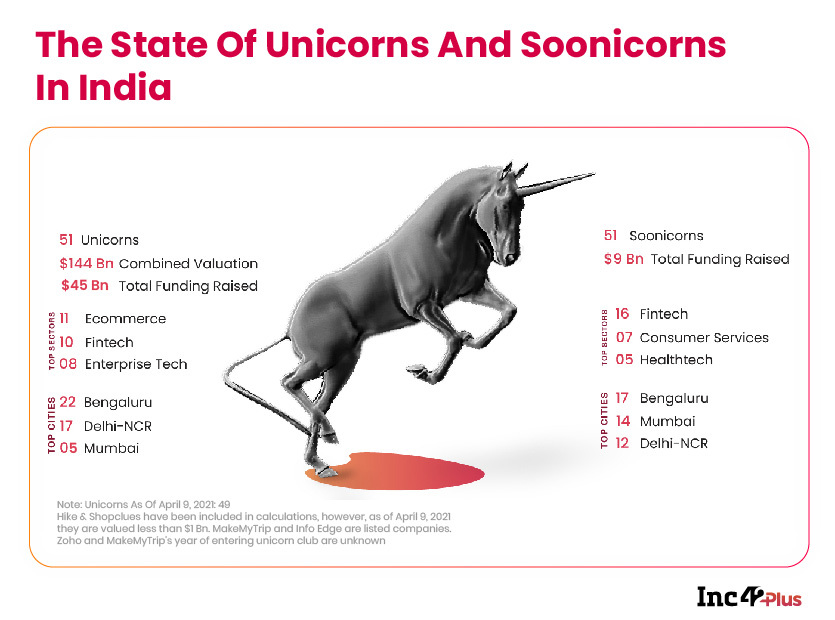 Overall nine companies have entered the unicorn club in the first four months of 2021, including Digit Insurance, Innovaccer, Infra.Market. At this rate, India will manage to get more than 100 unicorns by 2021, as suggested by Inc42 Plus’ previous report.

Indian edtech decacorn BYJU’S has finally confirmed the acquisition of Aakash Educational, the 33-year-old chain of physical coaching centres for competitive exams such as NEET and IIT-JEE. As earlier speculated, BYJU’S has spent around $1 Bn for the acquisition, making it India’s biggest edtech deal after BYJU’S acquisition of WhiteHat Jr for $300 Mn last year.

Swiggy’s Valuation To Jump To $5 Bn

Foodtech unicorn Swiggy is in the final stages of closing an $800 Mn Series J funding round, which is likely to see the company reach close to $5 Bn in valuation, a jump from its previous reported valuation of $3.6 Bn in 2020.

The current round, which was announced internally by Swiggy cofounder Sriharsha Majety, said to include a slew of new investors including Falcon Edge Capital, Amansa Capital, Think Investments, Carmignac, and Goldman Sachs.Sources confirmed to Inc42 that talks with investors are ongoing, and the round is likely to extend to $1 Bn in the next few weeks.

Overall, $1.5 Bn was invested in Indian startups across 134 deals this week