ChitMonks will be using the fund to enhance its product, scale it business and hire new talent.

Under ‘Blockchain for Social Good,’ EIC has selected six blockchain startups, which includes WordProof, Provenance, GMeRitS and others Hyderabad-based blockchain startup ChitMonks recently announced that it has raised $650K (INR 4.91 Cr) in a Pre-Series A funding led by early-stage venture capital firm Unicorn India Ventures. The company said that it will be using the fund for product development, market expansion, strategic recruitment and scaling up of its business operation.

ChitMonks cofounder Pavan Adipuram said that blockchain technologies can redefine chit funds, and it can re-emerge as a trusted sector where retail investors can invest and borrow money in a secure and transparent manner.

Founded in 2015, ChitMonks was cofounded by Veera Praveen, Malla Ch Reddy, Adipuram and Sridhar Reddy. The company is currently building one of India’s largest blockchain networks for savings and borrowings. It believes in making investments in chit funds more accessible, credible and rewarding.

With the help of its blockchain technology platform, regulators will also be able to monitor chit fund operations across the state on the private permitted blockchain network. The platform offers services to chit fund companies of any size, anywhere in India by digitally enabling them with process efficiency, better underwriting and making their offerings more inclusive.

According to Deloitte’s 2020 Global Blockchain Survey, majority of the respondents who work in the blockchain technology space said that the technology is being implemented in the areas of digital currency, data access and sharing, data reconciliation, identity protection, payments among others. 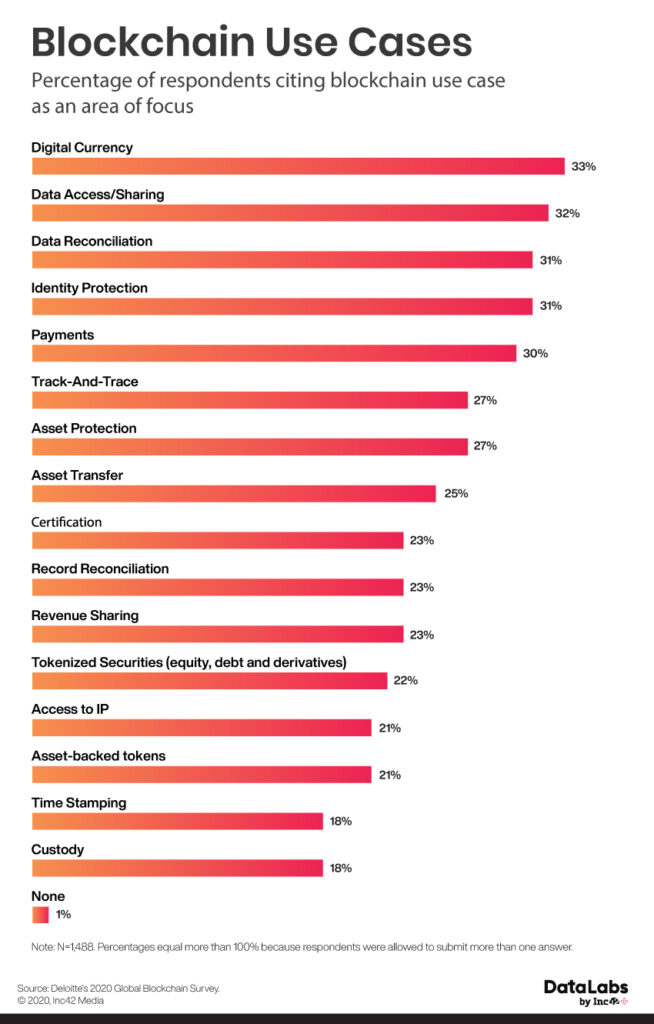 The European Innovation Council (EIC) recently announced that it has selected six blockchain startups under ‘Blockchains for Social Good’ initiative, where they will be receiving close to €5 Mn ($5.6 Mn). The six blockchain startups include WordProof, Provenance, GMeRitS, Unblocked Cash Project OXBBU, Prosume and CKH2020. The EIC received close to 176 applications from an array of international individuals, firms and public institutions. The solutions proposed by these startups ranged from fair trade and circular economy to increasing transparency in production processes and quality information, improving accountability and contributing to financial inclusion and renewable energy among others.

Singapore-based blockchain startup Pundi X recently announced that its blockchain-based point of sale (PoS) device, the XPOS, will now be integrating PayPal. The XPOS has been providing scores of brick and mortar stores with an alternative payment method to cash by allowing them to securely and efficiently transact on blockchain.

The development to support PayPal comes after Pundi X ran a Twitter poll asking its followers to recommend mobile payment of their choice which they would like to be supported on the XPOS platform. PayPal received close to 70% of votes, followed by other fintech platforms like Ali Pay, GoPay and Paytm.

Singapore-based logistics and supply chain management firm Global eTrade Services (GeTS) announced that it has partnered with blockchain startup Shuttle One to integrate with its payments solution ecosystem. GeTS which has developed a digital cross-border trade platform called CALISTA, already uses an open trade blockchain (OTB) platform which allows users to store and share trade documents securely. On the other hand, Shuttle One has developed a blockchain-based cross-border remittance platform.

With this partnership, GeTS gets to integrate this solution with its CALISTA Finance solution. In other words, CALISTA users will now be able to receive quick loans by leveraging the Shuttle One platform, which accesses credit assessment based on real-time trade and market insights using advanced data analytics tools.

The head of the Moscow government’s IT technologies department Artem Kostyrko recently said that the hackers tried to attack Russia’s blockchain voting system through the observer’s node on Saturday evening (June 27), and claimed that all votes have been successfully recorded on the blockchain. Further, he said that the IT experts are currently looking at the issue and soon the observer’s node will be restored. According to TASS report, nearly 1 Mn applications from Muscovites and almost 140K applications from Nizhny Novgorod were submitted to participate in online voting. This development comes after the website had crashed on the first day of electronic voting on June 25 due to an overload, the Central Election Commission had said.