Updated: 85% Of The Indian Ecommerce Firms Were Overvalued: Vinod Khosla

Updated: 85% Of The Indian Ecommerce Firms Were Overvalued: Vinod Khosla

Updated on 3rd October: Today Vinod Khosla tweeted that he had not stated that Flipkart and Snapdeal were overvalued. 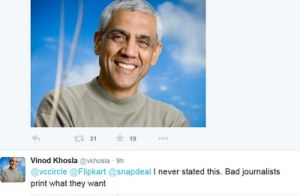 Prominent Silicon Valley investor Vinod Khosla said yesterday that India’s ecommerce giants Flipkart and Snapdeal might be overvalued, reports Business Standard. Khosla who had supported Google in its initial days and founded Khosla Ventures, stated, “If you ask me Flipkart, Snapdeal and other ecommerce startups are overvalued. But if you add up their market capital today and look 10 years later with the market cap then, I’m convinced it will be higher.” He added that about 85% of Indian ecommerce firms were over-valued.

Flipkart,  country’s largest ecommerce company, is currently valued at $15.5 Bn, while its close competitor Snapdeal, is valued at nearly $5 Bn. Though more and more Indians are opting to purchase goods through these firms, lured by incentives and discounts, the two giants are yet to become profitable. Incidentally, Flipkart recently crossed the 150 Mn products in sales last month.

According to Khosla, investors pump in millions in startups, hoping to make massive gains  in future. With huge amounts of funds coming in their way, Khosla asked startups not to become overconfident. “Take the money that comes in your way, but do not get overconfident with the money. Examine the company, look for flaws as much as you look for trends.” he said.

He added, “Sometimes, when venture funding becomes easy, people forget that in the end business has to work. Especially, when so much money is flowing, you have to be careful about not wasting money and talent around something that has flaws. Try and learn from others what’s important.”

Khosla’s views are not far off the mark as far as millions being pumped in startups is concerned. According to the latest factsheet on Indian venture capital released by Preqin, this year the number of VC deals struck in the country was over 500 and amounts to over $6 Bn. Last year, over 450 VC deals were struck and were valued close to $4.5 Bn.

It is interesting to note that as per the Prequin report, all the top three VC rounds in India, since 2007, were raised by Flipkart – Series G worth $1 Bn in July,14, Series H worth $700 Mn in Dec -14 and an unspecified round worth $700 Mn in July, 15.  In fact, the $1 Bn Series G funding of Flipkart was also the largest ever Indian venture capital deal in the country. The company is backed by investors such as Tiger Global, Naspers, Singapore’s sovereign wealth fund, GIC, and Accel Partners, among others

Similarly, rival Snapdeal is backed by investors such as Softbank, which invested $600 Mn in October 2014. In August 2015, it raised another $500 Mn in a new funding round led by Alibaba, Taiwanese electronics manufacturer Foxconn and  SoftBank. The company’s investors include  Temasek, BlackRock, Myriad, Premji Invest, eBay, Bessemer Venture Partners and many Indian VC firms including Kalaari Capital & Nexus Venture Partners.