The Rising Startups Of Rajasthan: The State’s Most Promising Tech Startups

The Rising Startups Of Rajasthan: The State’s Most Promising Tech Startups 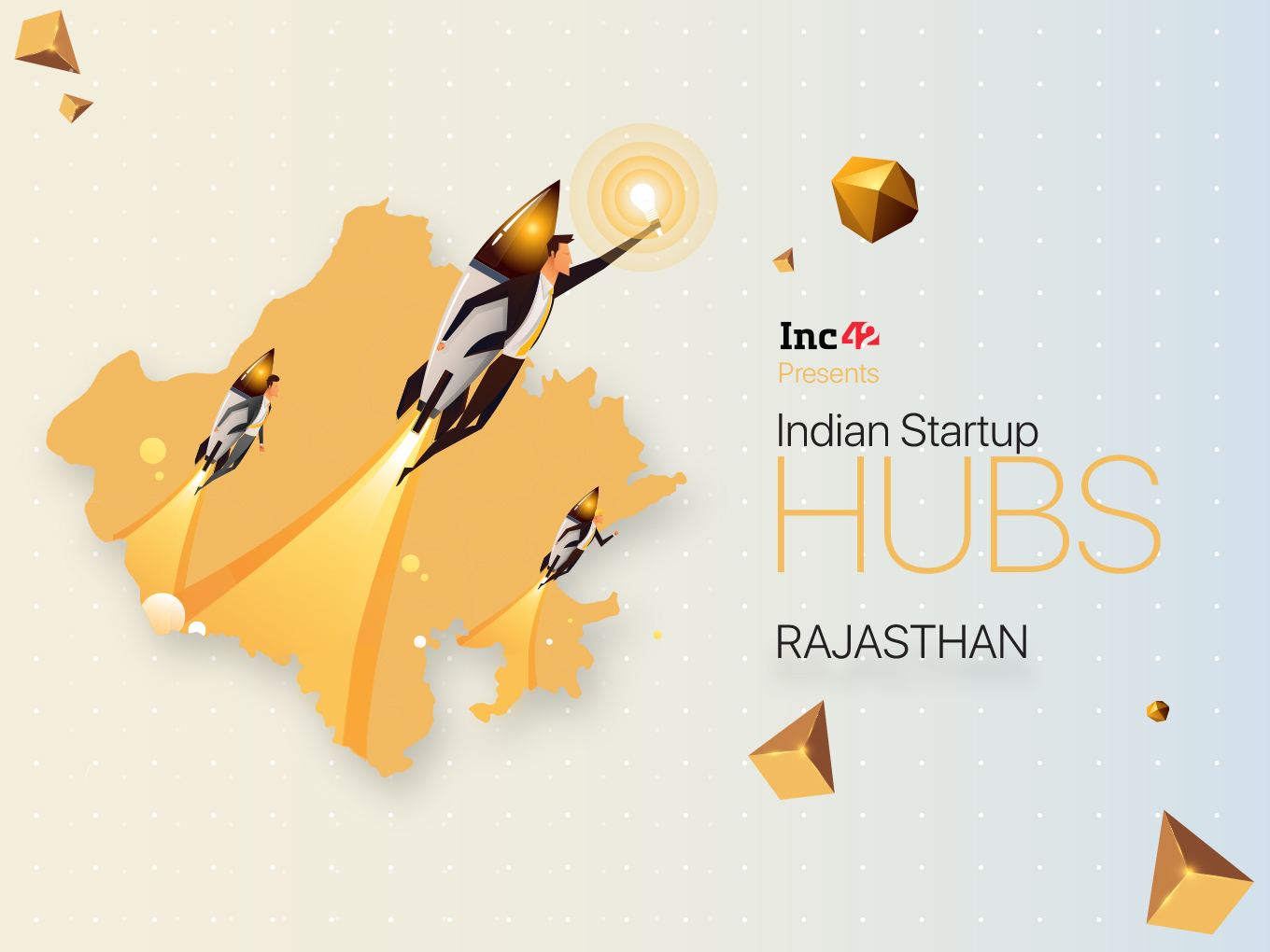 State has been the growing ground for startups like Razorpay, Dcoder and CarDekho

Here, taking a deeper look into the state’s startup ecosystem

In the DPIIT’s 2018 State Startup Ranking, Rajasthan was among the top performing states in India. Some of the driving factors for such growth are said to be the state’s proximity to Delhi, Jaipur’s unique mix of urban and semi-urban infrastructure, and the state government’s startup focus.

While Jaipur has emerged as the flagbearer for Rajasthan’s startup ecosystem, Udaipur and Jodhpur have also been noted as prominent startup spots. In terms of sectors, Rajasthan have a mix of startups ranging from jewellery retail, agritech, tourism, deeptech, extending to cloud kitchen, mobility, SaaS and healthtech. In terms of funding, Jaipur startups have raised $110 Mn in funding which was the highest amount raised by any Tier 2 city in India for the year,

According to the startups and investors that Inc42 spoke to, the biggest challenge of Rajasthan’s startup ecosystem is the lack of talent pool, which has led to the migration of many growth stage tech startups such as Razorpay and Dcoder.

Rajasthan’s Most Promising New Startups In 2019

Even though many have ventured into other state territories, the desert state still boasts of an extensive portfolio of startups focused on solving a myriad of problems. These vary across sectors ranging from power and energy to mobility to fintech and agritech.

The Jaipur-based company was founded by Yashraj Khaitan in 2012. The company has designed a low cost smart meter, powerdistribution management technology and a smart microgrid solution for energy access in remote areas. Through its technology and ‘metering as a service’ business model, the company claims to have radically reduced power theft and electricity distribution losses in India.

Founded by Angraj Swami in 2017, the Jaipur-based cleantech startup enables end-to-end control over waste segregation, collection, tracking, recycling with the help of IoT and blockchain. Ecowrap assist its clients with the right infrastructure and the training required for segregation at the water source.

The Jodhpur-based company is a social agritech startup innovating in cattle nutrition through upcycled food waste. Krimanshi was founded by Nikhil Bora in 2015 with an aim to create context based affordable animal food business in India by sourcing locally available raw materials to manufacture low cost animal foods.

The Jaipur-based startup was founded by Naveen Meena and Mohit Sharma in 2015. ToRoots is a travel startup offering curated vacation packages in rural Rajasthan. The company has raised seed funding from the state government’s Bhamashah Techno Fund and other angel investors.

The Jaipur-based company was founded by Lokendra Ranawat, Dinesh Pratap Singh, Virendra Ranawat, Vikas Baheti in 2015. It is an online furniture marketplace enabling users to order customised products and even see a 3D preview of it before buying.

Girnar-owned CarDekho is operational since 2007 and has built a complete ecosystem to enable its consumers to have easy and complete access to buying and selling cars, as well as information on cars. So far, CarDekho has raised a total $202 Mn in funding. Company existing investors include Hillhouse Capital, Tybourne Capital, Times Internet, and Sequoia Capital, among others.

Founded by Sagar Agrawal and Sahil Agrawal in 2015. HippoCabs is an intercity cab rental service in over 200 cities including Delhi, Gurgaon, Jaipur, Noida, Faridabad, Ajmer, Pushkar, Jodhpur, Udaipur and Chandigarh. It competes directly against the likes of Ola, Goibibo and other providers of intercity cab or outstation rentals.

Tax2win.in was launched to help individuals and businesses learn more about how they can save income tax during the filing process and makes it easier for customers to get their returns processed. The Jaipur based fintech startup was founded in February 2015 by Abhishek Soni, Vertika Kedia, and Shishant Todi.

The Udaipur-based company is a Hindi hyperlocal news and content startup, providing alerts, updates on happenings around the municipal towns. The company is currently present in and around Kanore, Bhinder, Salumber and Fateh-Nagar.

The Jaipur-based edtech startup was founded by Kapil Arya and O.P Godara in 2015. It is a hybrid education model using real and virtual teaching aids to impart 5D classroom experiential learning and online assessment platform with deep analytics for K-10 students, teachers and parents.

The Kota-based company was founded by Shreyans Mehta, Nikhil Baheti, and Salda Dhanavath in 2016. MedCords is a telemedicine startup which uses a network of local pharmacies to digitise villagers health records and introduce them to digital consultations. It was also one of five winners at Startup India-WhatsApp Grand Challenge.

The Jaipur-based company was founded by Sanjit Sihag and Vinit Godara in 2016. MyTeam11 is a fantasy sports platforms offering over 150 contests in dual languages across multiple games including cricket, kabaddi, volleyball, basketball and football.

Founded by Sourav Lodha in 2014, KuberBox aims to establish itself as a genuine source to buy diamond jewelry in India in a personalised and customised fashion. The company also aims to create a network of self-motivated individuals and small businesses who can extend its products and services to their customers through the use of Kuberbox’s tablet app, under the KuberBox Privileged Partner programme.

Founded in 2016 by Rajendra Lora, it is a fruit and vegetable delivery startup. The Jaipur-based startup procures goods directly from the farms and thus removes the need for middlemen between farmers and buyers. In April 2019, FreshoKartz raised seed funding from a clutch of angel investors including Sunil Kumar Singhvi.

The Jaipur-based company was founded by Nishant Patni and Pranshu Bhandari in 2012. Offering digital English language learning, the startup uses AI models to help those conversant in regional languages to pick up English. In 2015, the company has raised its $6.5 Mn Series A funding from Tiger Global along with the participation of Kae Capital and 500 Startups.