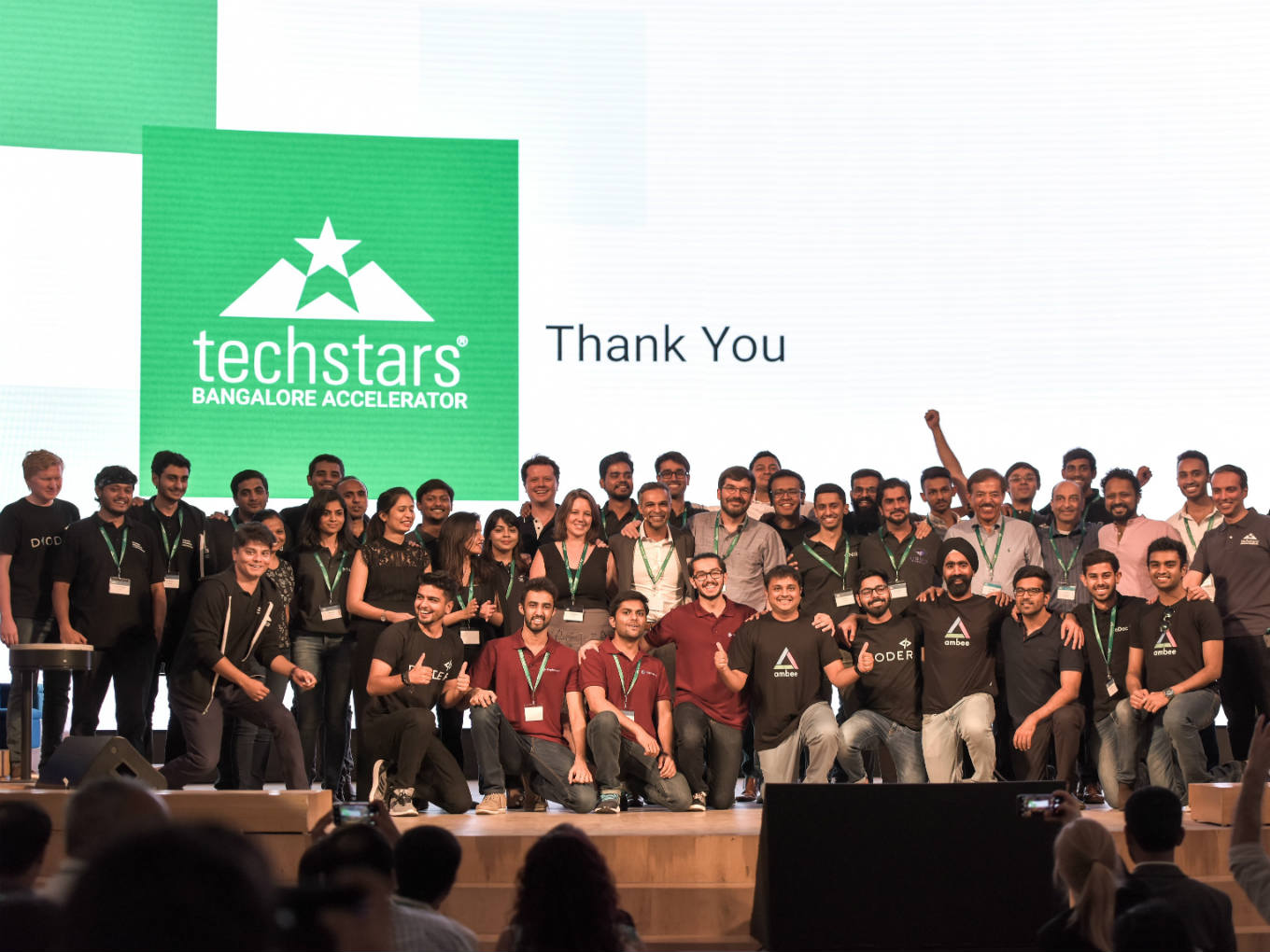 With Bengaluru ranked the 11th best startup city in the world, the city is home (or the second home at the very least) for many Indian and global startups. While US-based Y Combinator has been focussing equally on Indian startups as their counterparts in Silicon Valley, another US-based accelerator has already made India central to its plans. With 1,700 startups in its portfolio, Colorado-based Techstars has bigger plans for the Indian startup ecosystem.

Techstars plans to expand its existing Bengaluru accelerator to other cities as well as co-create innovation labs by partnering with major corporates and government bodies, as well as with other leading incubators and accelerators in the country. The company is also planning to borrow India’s talent pool to meet the technical skill-set requirements of its member startups.

At its Demo Day in Bengaluru yesterday (May 2), Techstars Bengaluru Accelerator celebrated its first Indian cohort of 10 startups.

Founded by David Brown, David Cohen, Brad Feld and Jared Polis in 2006 in Boulder, Colorado, Techstars is one of the largest accelerators in the world. The company plans to choose over 500 startups, this year, to join its mentorship-driven accelerators around the globe, investing $120K in each company and giving the startups lifetime access to the Techstars network.

With India being the third largest startup ecosystem in the world, the Techstars Bangalore Accelerator was launched in March last year. The first cohort of the accelerator includes the likes of Ambee, Dcoder, Leucine, Liquid Diamonds, Nira, oDoc, Redwing, Rephrase, and Unifize.

Brown, the co-CEO and cofounder of Techstars, lauded the vibrant entrepreneurial ecosystem in India and Bengaluru in particular.

“Bengaluru has become the startup hub for not just India but for the entire emerging markets. Our experience in India in the past year has been so encouraging that we are now convinced to grow exponentially in the country. We are looking at expanding our accelerator programs beyond Bengaluru, later this year”

The 3-month-long acceleration programme in India has the famed Techstars criteria. Brown said, “The six criteria that we have are: Team, Team Team, Market, Progress and Idea. Here, ‘team, team, team’ means that people matter the most. The reason behind is that excellent founders can make mediocre ideas look great with better implementation and scalability and keeping the work in progress. However, the same can’t be said about mediocre founders with great ideas.”

Seconding this, Newal Ray, MD, Techstars Bangalore Accelerator added that they looked to the founders who have personally overcome some kind of challenges be it in their previous startups, or while playing sports, or when recovering from illness, etc.

Besides team and market, Techstars also looks at progress and ideas as the other parameters while shortlisting startups. “Progress means how quickly one makes the move. For instance, you have been in existence for five years and you have only made the MVP (minimum viable product). But if somebody who started just a few weeks back and have made a website in a week, and then MVP in the next few weeks. That’s progress for us,” asserted Brown.

Introducing Bengaluru As A ‘Silicon Valley’ For Emerging Startups

Speaking about how the accelerator attracts startups from across the world. Ray said that the programme received an overwhelming response –  over 1000 applications from 30 countries. This means not only Indian startups but startups from other countries also want to come to Bengaluru, such is the attraction to the city for startups.

“That’s also the motto of Techstars. We want to introduce Bengaluru as an example for all the emerging markets out there,” – Newal Ray

The 10 shortlisted startups are completely different from each other and according to Ray, Techstars Bangalore Accelerator has deputed 80 mentors overall or around 7-8 mentors for each startup chosen in the first cohort.

“We did a total of 650 meetings in the first three weeks of the acceleration programme. That’s quite a process and rigorous work for startups. The job was certainly not easy. We have redefined the meaning of mentorship.” – Ray

However, some mentors also find Indian founders a little different from the global ones. Ray emphasised that at the Bengaluru acceleration programme, there was a significant amount of handholding. Many of the mentors who had come from abroad commented that the founders were asking “tell me what to do”. They wanted to be given the answers.

At other places, people have opinions, added Ray.

Founded by Ankush Chugh in 2019, Bengaluru-based Dcoder gives coders of all skill levels the ability to create and compile code on mobile devices. Dcoder has programming support for 35+ languages, with features like custom code editor, proprietary coding keyboard and cloud compilers. It claims to bridge the gap between the underserved mobile and the more popular desktop coding solutions.

Founded by Ishan Vyas and Priyanshi Chaubey in 2016, Indore-based Instacar is a long-distance car rental service that focuses on safety, reliability and quality. Instacar takes a bottom-up approach to improve passenger experience and safety by educating and training drivers who are often the make-or-break factors in any car rental service. It has created a complete execution book for providing service with a 100% compliance to safety and reliability standards.

Founded by Kashyap Mehta, Mark Molloy and Chetan Gupta, in 2017, New York-based Liquid Diamonds is a B2B online exchange for certified diamonds – think of it like a Nasdaq for diamonds.

Since each diamond is unique, traditional exchange systems do not work for diamonds. The company’s patented Universal Continuous Double Auction (UCDA) technology brings a  commodity exchange-like system to the diamond market, thereby introducing price discovery and liquidity for the first time. The exchange enables diamond cutters, traders, jewellers as well as financial investors to buy and sell certified diamonds on a single global platform.

Founded by Rohit Sen and Nupur Gupta in 2017, Bengaluru-based NIRA provides credit to grey collar workers (classified as neither blue or white) who typically earn less than INR 35k per month to help them during financial emergency.

NIRA acquires customers both through partnering with employers and leveraging customers’ existing networks to reduce the cost of acquiring customers. It develops strong affinity-based relationships with its customers, serving individual needs such as medical expenses, educational fees, weddings and other household requirements.

oDoc is a mobile-app based telemedicine platform for employers to offer immediate 24/7 access to doctors for their employees onsite and remotely. We do this via smart and feature phones. It combines a simple user interface and a  trusted caregiver onsite to win the acceptance of the end-user base. oDoc is a sustainable business solution for employers looking to decrease attrition, reduce healthcare costs and slash productivity losses.

Founded by Ashray Malhotra, Shivam Mangla and Nisheeth Lahoti in 2018, Mumbai-based Rephrase creates high-quality videos and animations using just text as input thanks to its generative AI. According to the company, any text or speech input into the Rephrase Generative AI engine in any of its 40 supported languages would create desired video/animation based on a human character of the user’s choice. This can be used by HR to create training videos, or for personalising videos for sales, besides applications such as making characters speak in AR/VR, giving a face to virtual assistants, A/B testing for digital ads to increase marketing returns.

Founded by Ben Merton, Lakshman Thatai, and Avinash Sultanpur in 2016, Bengaluru-based Unifize is a chat application that helps manufacturers reduce the time it takes to design, make, and sell their products. The chat application guides the business users through the various people, data and processes in the manufacturing sector through conversations.

Techstars India also works with corporates to run their innovation programmes and with local and state governments to build innovation ecosystems. The company is currently engaged with 20 corporate entities across India.

Bala Girisaballa, President of Techstars India asserted that Techstars is bullish on the India market.

“We have very aggressive plans and are looking to launch more accelerator programmes in India, beyond Bangalore, later this year. We will be partnering with local angel networks, investor community, ecosystem builders, etc. in driving acceleration programmes” – Bala Girisaballa

Looking for partnership with state-run start-up initiatives/institutions in Karnataka, Telangana, Rajasthan and Kerala among many other states, the Techstars plans to run joint accelerator models (with corporates) in India on the lines of models like Berkeley and Amazon in the USA.

Besides, the company has also started helping its member startups around the world acquire the right technical talent from its pool of human capital in India.

“We are already working with eight startups, which are not from India but are working with Indian developers. We are now talking to another set of 25 startups,” said Girisaballa.