[The Outline By Inc42 Plus] The UPI Cap Conundrum

[The Outline By Inc42 Plus] The UPI Cap Conundrum 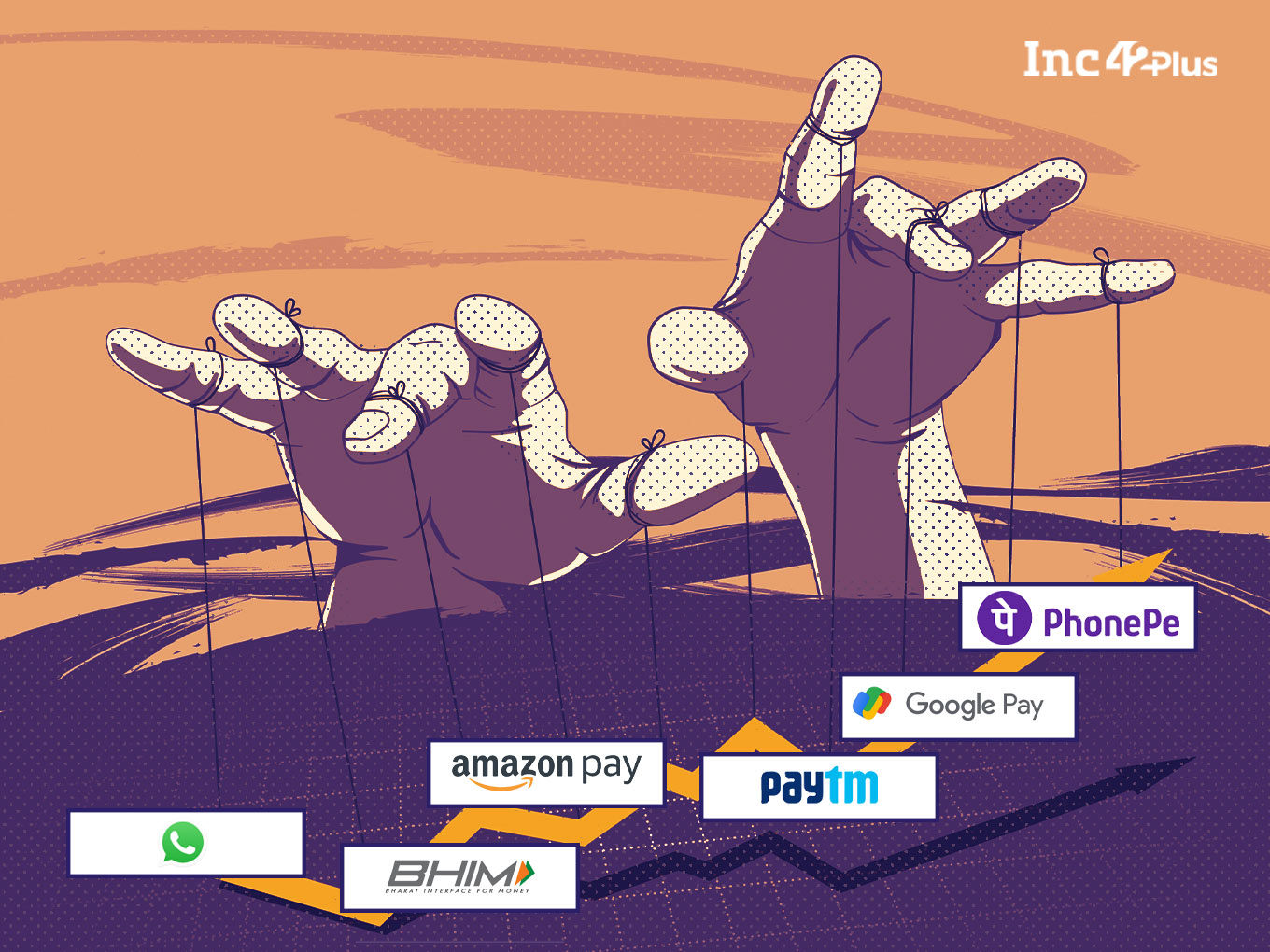 Fintech policymakers are not able to balance intent and outcomes

There was a time when getting a landline connection or buying a car meant being on a waiting list for months, if not years. It happened because governments in the pre-liberalisation period effectively capped how much goods and service businesses could sell. Such practices were scrapped when economic liberalisation was ushered in during the 1990s, and consumption became the lifeblood of a thriving economy.

But three decades after that significant shift, a new rule to govern the united payments interface (UPI) ecosystem that catalysed digital adoption since its implementation seems to revert to the past. While the rule of capping the market share of third-party UPI apps at 30% was floated in November last year, the standard operating procedures (SOPs) to implement it came about recently. The decision is meant to protect the payments channel from concentration risk, assuming that the entire UPI system may come to a screeching halt if a few big players face big outages.

However, several sections of the SOP document sound out of sync with the current government’s ‘Digital India’ push and the credo of a post-liberalisation India. Take, for instance, the template of the message shared by the NPCI that new users of any UPI app exceeding the cap will soon receive:

“As per the NPCI rules, any UPI app with more than 30% market share cannot onboard new customers until their market share goes down. Currently, X’s UPI market share is Y%. So, unfortunately, you will have to wait a while before you can access our UPI services. We apologise for the inconvenience and promise to notify you as soon as the NPCI allows us to onboard you again!”

But before we dive into the nitty-gritty of the NPCI mandate, here is a quick look at the UPI ecosystem and its exponential growth: 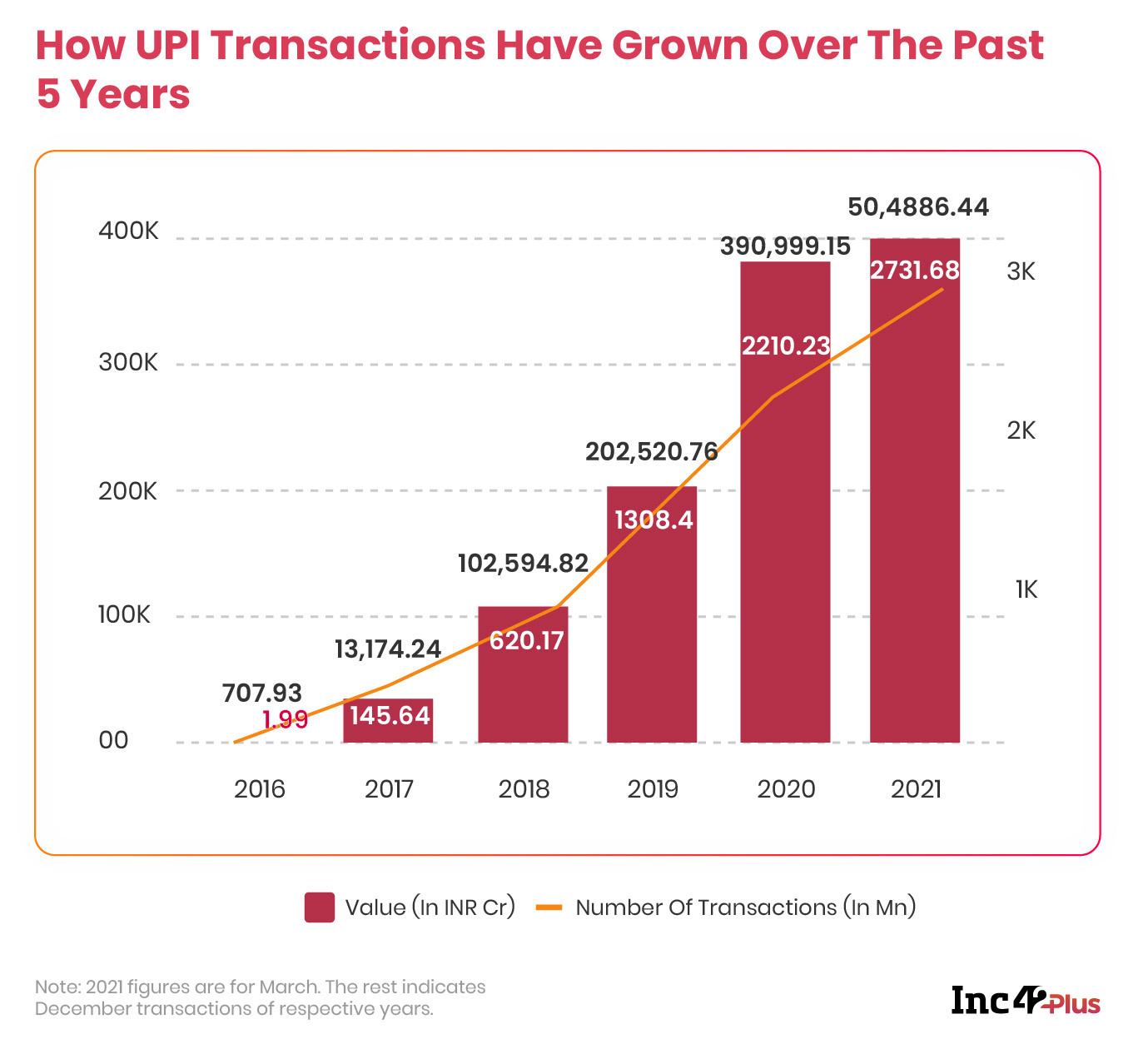 The central framework implementing the 30% rule hinges on a three-level system. Interestingly, it does not take the route of rejecting existing users’ transactions on a UPI app as many feared earlier. Instead, apps cannot onboard new users until their market shares come down to the stipulated limit. It ends on a note that gives the NPCI, the de facto digital payments regulator of the country, the discretion to offer exemptions, not unlike the licence raj of yore. Here is a summary of the same:

Deepak Abbot, cofounder of the Gurugram-based fintech company Indiagold and a former Paytm executive, wrote that the on-ground implementation would not be easy. “There are a lot of exemptions given in the guidelines, which may actually give both PhonePe and Google Pay another year after December 2022 (the deadline to comply with the 30% bar).”

It means Google Pay and Walmart-owned PhonePe, the only players currently above the threshold, may not comply with the rule at all within the stipulated time frame. Interestingly, PhonePe cofounder and CEO Sameer Nigam has said that the company will continue to add new users despite the cap.

This could be a double whammy for other players. To start with, the players who have already exceeded the limit may refuse to cede ground and seek exemptions.

More importantly, as Abbot points out, UPI as a product will complete the late stage of adoption by the end of next year. The most valuable users who can fuel growth will be already onboarded by then. Users who will come into the UPI fold after that point will be the digital laggards, not as attractive as the initial adopters because they will take longer to acclimatise, and smaller players will end up onboarding them.

However, as the NPCI data quoted earlier shows, there is a threefold-fivefold room for growth in the UPI subscriber base in the next five years. These users may not be the cream of the Indian economy, but the immense size of this addressable market means that every player will get a larger piece as the cake itself gets bigger.

But Mandar Kagade, a fintech policy expert, feels that the rule requires a rethink. “The regulatory and sub-regulatory thicket just keeps growing even as the executive arm (of the government) pushes the Digital India initiative. Also, it will have an asymmetric impact on participants.” 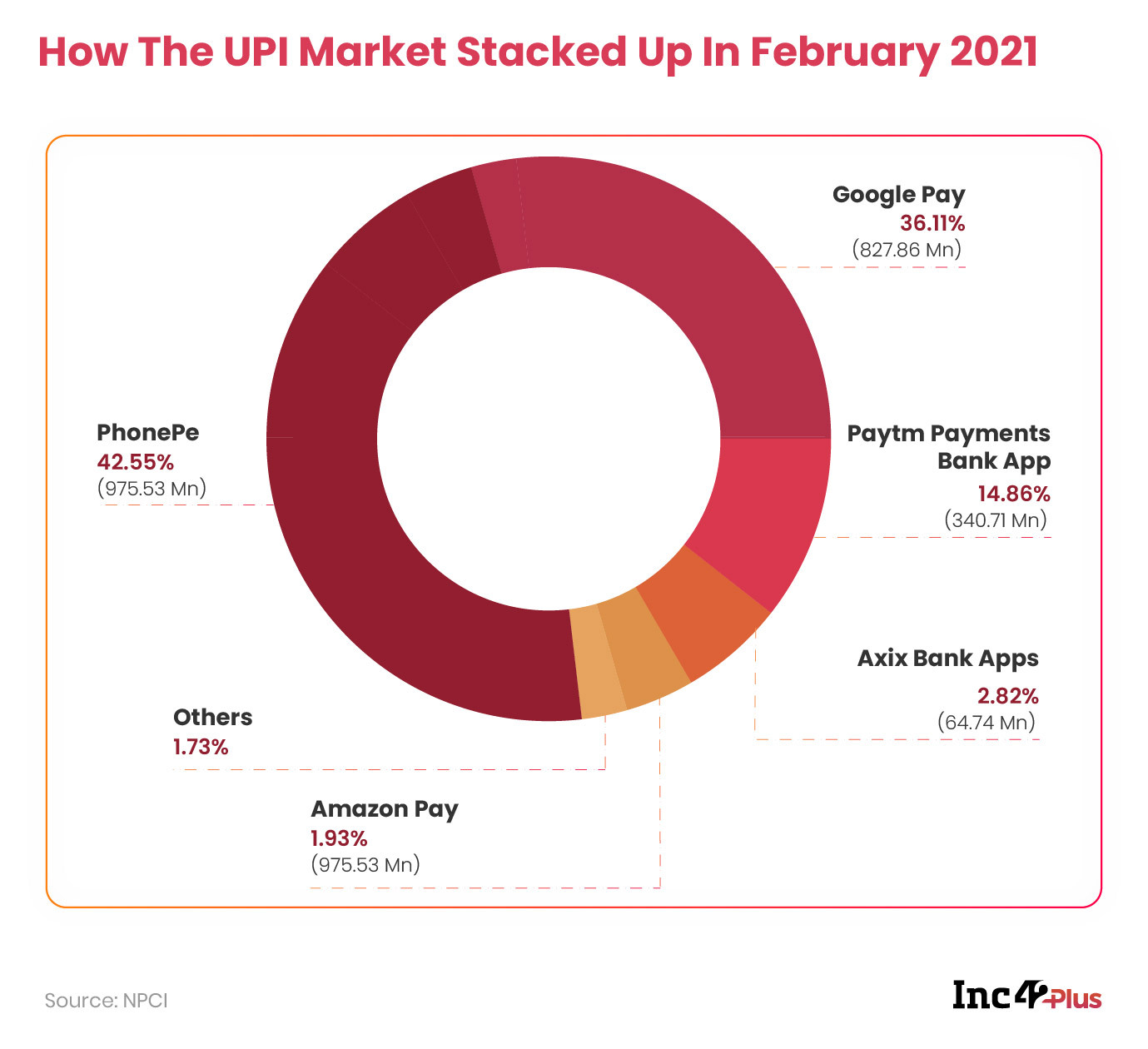 Are Policymakers Missing The Wood For The Trees?

At the root of this capping exercise, which is expected to inconvenience users, banks and third-party UPI apps, is the premise that a few players may become so big that their downtime will affect the entire ecosystem, as we mentioned at the outset. But if industry experts are to be believed, the NPCI is making an error of judgement.

“Technical declines (failed transactions due to technical glitches) are mostly a result of either the legacy systems that banks still use or faults in the technology architecture of the NPCI. Moreover, only around 20% of the steps involved in a UPI transaction happen at the apps’ end. Also, UPI apps invest a lot more in their technology and are the most stable in the ecosystem,” says a top executive at a payments company who does not want to be named.

According to the executive, NPCI’s own system has improved a lot over the past year, but banks still face double-digit hours of downtime every month. Be it the Yes Bank outage in March last year, the frequent downtimes of HDFC Bank or the SBI’s digital payments breakdown a couple of days ago (April 1), India’s largest banks are facing enough hurdles during the digital transition.

Interestingly, a look at the UPI data published by the NPCI shows that the top five banks account for more than 50% of the transactions, with the SBI at the pole position. This begs the question: Is it not better to cap the number of UPI transactions at the banks’ end?

According to a veteran observer of the financial services industry who does not want to be named, “That is not something that the NPCI can do. Banks come into the picture because most of the users are account holders. It is the RBI’s prerogative to put an upper limit on the market share of a bank in terms of the number of accounts, but that is unlikely to happen as most of India remains unbanked.”

But one may still ask why big banks with billions of dollars in market capitalisation are not investing adequate resources to plug the gaps.

The reason is the much-reviled zero MDR rule.

The MDR (merchant discount rate) is the cost paid by a merchant to various stakeholders who help process the transaction. Among all stakeholders, banks used to take the biggest cut. But in December 2019, the Indian government introduced zero MDR for UPI and RuPay, which mandated that businesses with an annual turnover of more than INR 50 Cr would have to offer their services for free.

Understandably, it is one of the key reasons why banks do not have any incentive to invest in their payments technology. But there is another consequence of the zero MDR rule.

The revenue wipeout has actually nixed all future innovations by small players. While UPI apps funded from foreign shores can pour dollars endlessly in the hope of making money someday, young startups aspiring to build innovative products on top of the UPI ecosystem cannot take that route.

This shows that the country’s fintech policymakers have not been able to balance their intent and outcomes, according to experts. Yes, the fintech startups raked in the biggest amount in funding, accounting for $2.1 Bn of the $11.5 Bn raised by the entire ecosystem in the pandemic-hit 2020. But that sheen is not likely to last long if the government does not get its act together at the earliest. 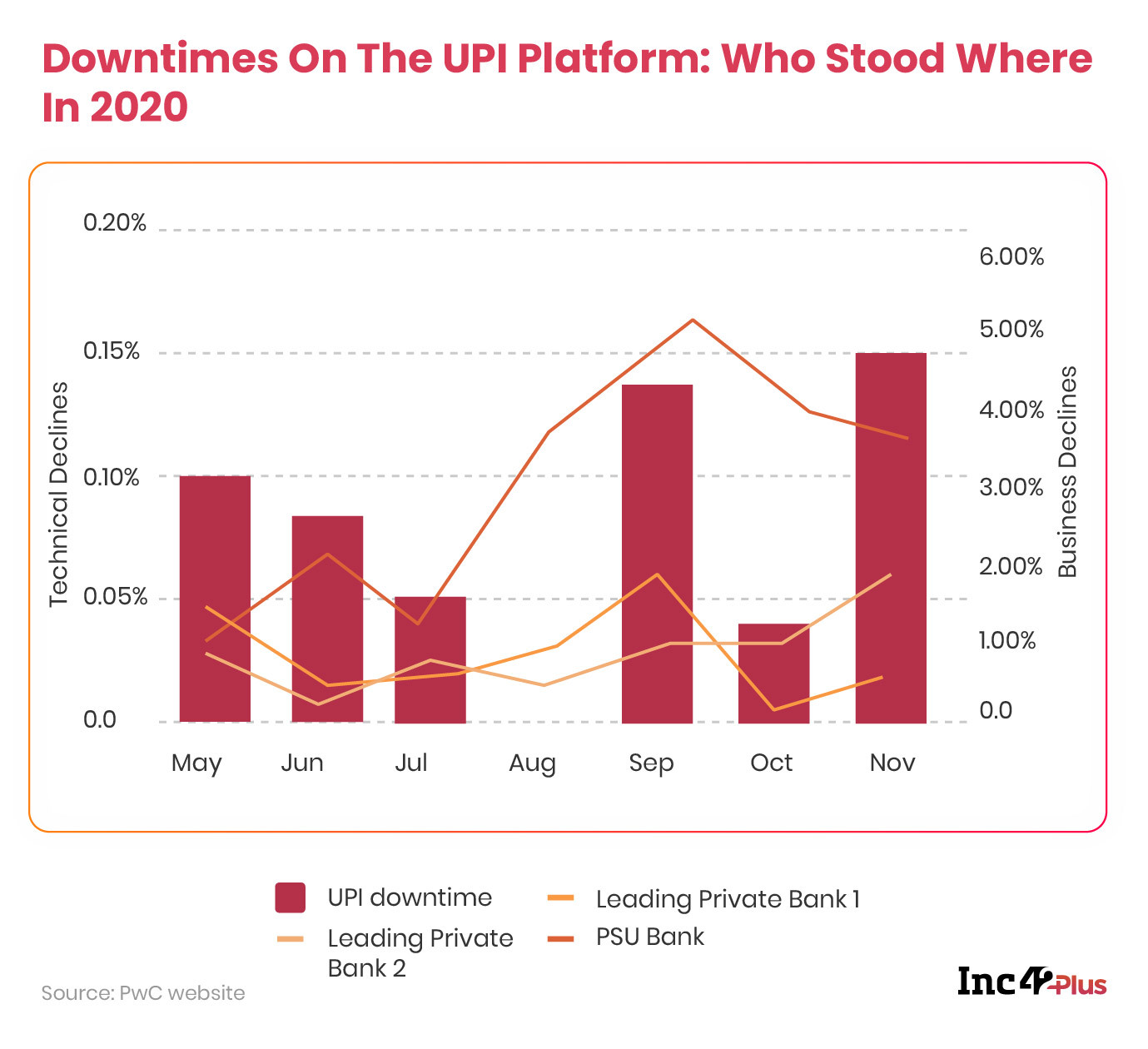 The Scramble For Digital Payments

In a bid to make digital payments sustainable and reduce the concentration risk, the RBI has invited bids for licences to create for-profit organisations that will compete with the former. As the deadline to apply for the new umbrella entity (NUE) licence passed with the end of FY2020-21 (March 31, 2021), the names of at least six consortiums have emerged.

The candidates are among the who’s who of India Inc. as well as unicorn startups. With the Tata group, Reliance, NABARD and Mastercard backing startups such as Paytm, Ola, Razorpay, PayU and PolicyBazaar, and tech giants such as Google, Facebook and Amazon in the fray, the NUE field does not lack the big guns.

So far, there is no clarity on what each of these consortiums hopes to achieve with the NUE licence, but securing the bid will help these companies attain greater autonomy in processing digital payments in India. 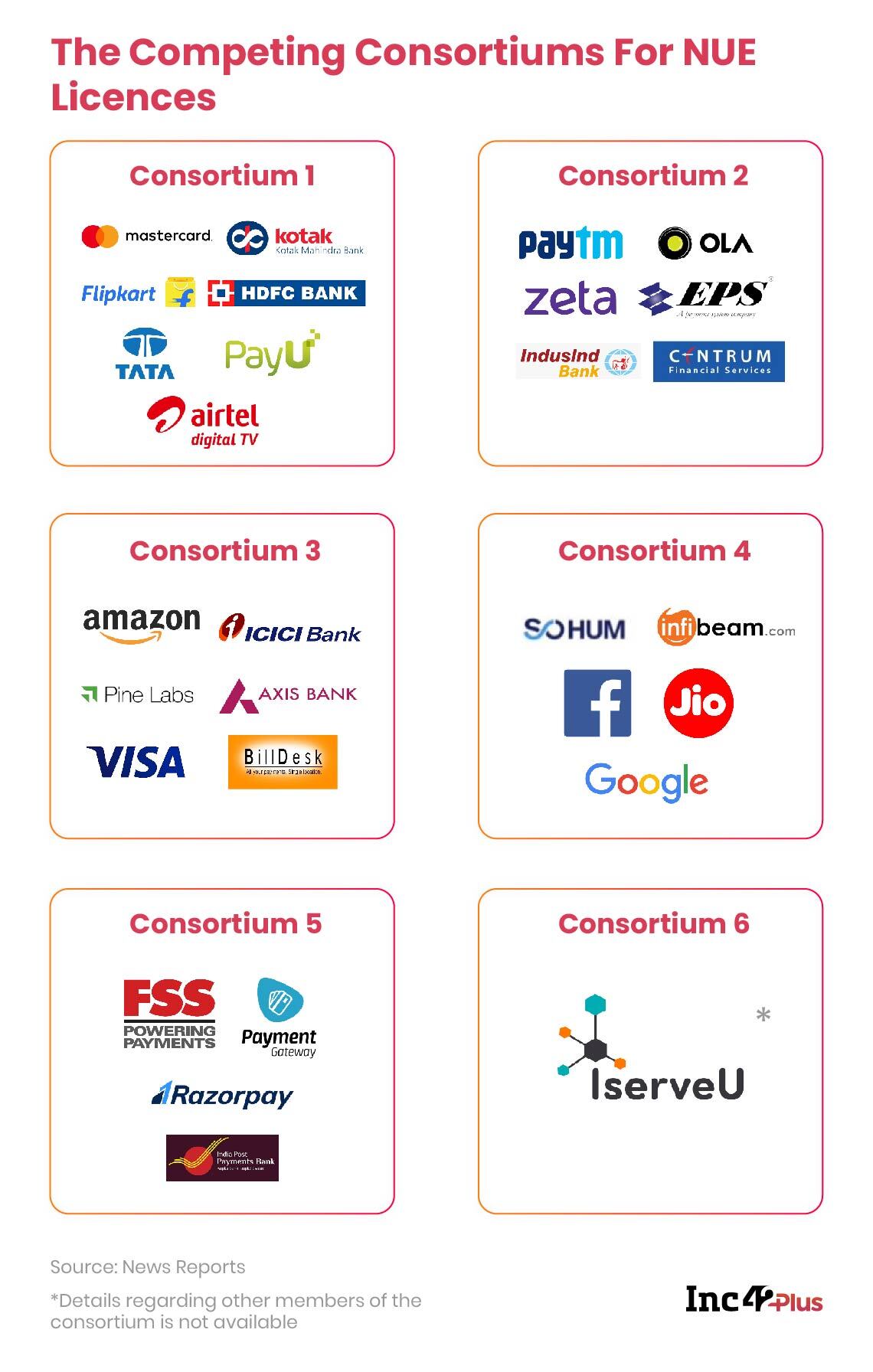 Zerodha founder Nithin Kamath has an interesting point of view. Quoting a tweet that recounted how a 66-year-old woman was sold a financial product with a 30-year horizon by a leading bank, Kamath says that mis-selling happens because of the revenue targets given to salespeople.

He offers a solution too. “If a 66-year-old walks into a bank, the employee selling has to mandatory enter a bunch of details into the bank sales app. Based on the profile of the customer, only a bunch of products (MF, insurance, etc.) that fit the risk profile can be sold and nothing else.”

This is sage advice for many young entrepreneurs looking to make their mark in the fintech industry, especially as the sector is the biggest unicorn generator in India. And it is not surprising that early-stage fintech startups regularly make it to Inc42 Plus monthly list of 30 Startups To Watch Out For. In the latest edition, two such companies — Muvin and Nupay — have made the cut.

While Bengaluru-based Muvin is building a neobank platform for teenagers through an intuitive, easy-to-use, gamified and financial education-driven experience, Delhi-NCR based Nupay has developed an enterprise-focussed neobanking platform that enables banking, payments and credit services. Set up in 2020, Nupay currently processes more than $120 Mn worth of transactions every month.

One thing that has helped young startups is that seed-stage funding has picked up after a drop in the second quarter of last year and outstripped pre-pandemic levels. According to an Inc42 Plus report, there were 127 seed funding deals in Q1 2021, the highest in any quarter since Q1 2018.

Although startups are striving to innovate and grow, the spectre of regulatory missteps continues to plague them. It is only normal that the country’s technology policy will be in a state of flux for some time now as India takes a giant leap forward in the digital era. However, policymakers need to understand the nuances of regulation before implementing sweeping changes, especially in the fintech sector, as it is connected to every other sector. After all, it will be a crucial growth driver if India aspires to become a $5 Tn economy.