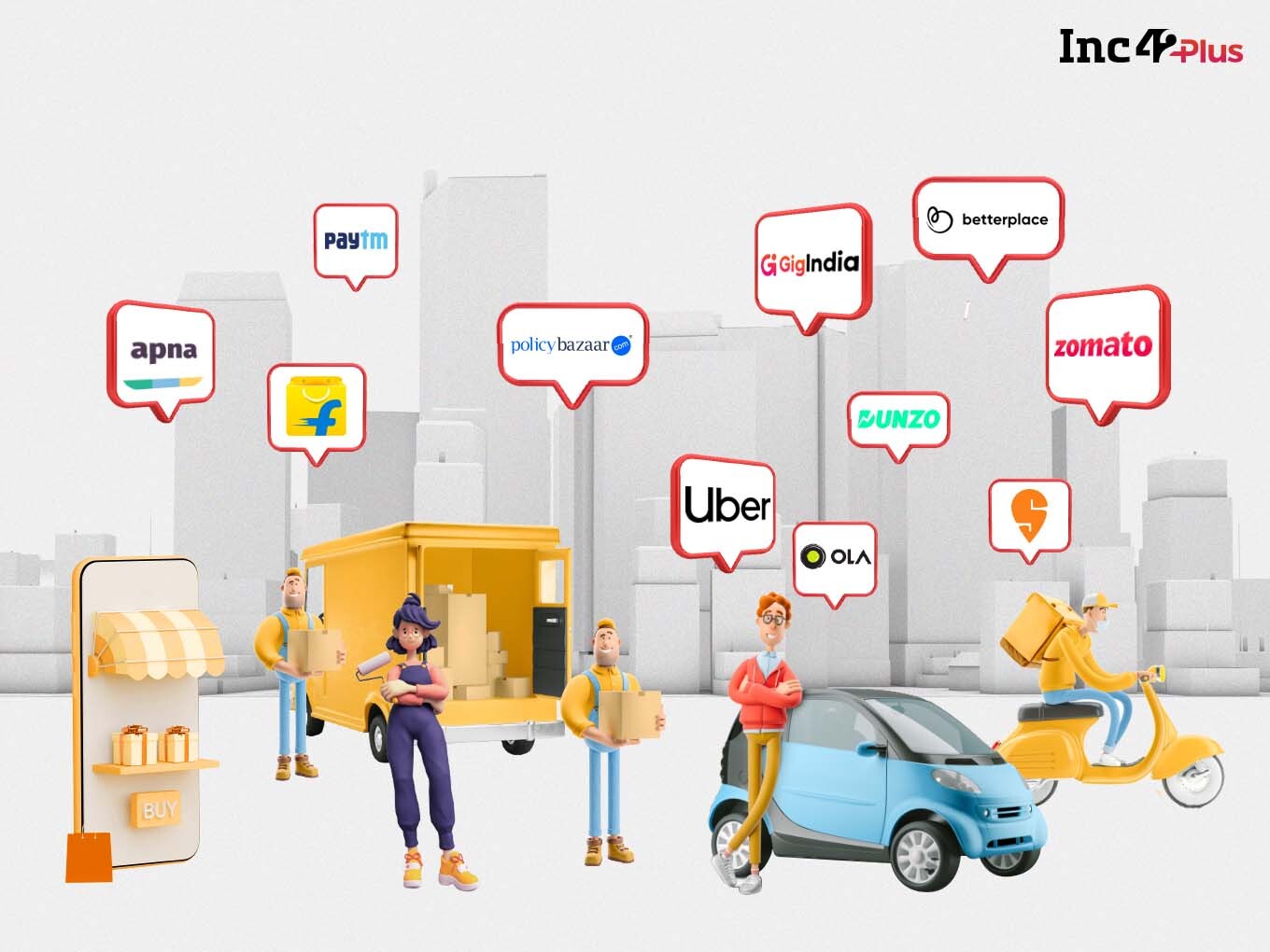 If you are reading this, chances are you make a living in the tech industry and chances are that the past 12 months have been a period of exciting growth for many of you.

The Indian tech startup ecosystem has matured beyond belief since 2020 and the past nine months have been a game-changer in many sectors, but one crucial component of the tech industry has been left behind — the gig workers.

The past few months have shone a light on the state of the gig economy in India, which is often boiled down to Zomato and Swiggy, the two major food delivery platforms, and Ola and Uber, the two largest ride-hailing apps.

From Urban Company-like beauty and home services professionals, to field agents for fintech companies. From student interns in tech teams to freelance content creators. From workers being organised by multiple players in the real estate and construction tech sector to the hospitality industry which has seen “gig hotels” on OYO and other aggregators, along with gig workers for sanitation, facilities management, catering and plenty of other part-time workers and contractors across other sectors.

With remote working growing in relevance in the past 18 months and with many unskilled or underskilled workers migrating back home, gig workers have become the go-to option for many sectors, and it’s also allowing startups to capitalise on the resultant positive impact on their unit economics and profits.

It’s hard to estimate just how many Indians make a living from the gig economy given the unorganised nature of some of the above segments, but according to a Boston Consulting Group study, more than 8 Mn Indians are gig workers, which is expected to grow to 24 Mn by 2023-24 and 90 Mn before the end of the decade. 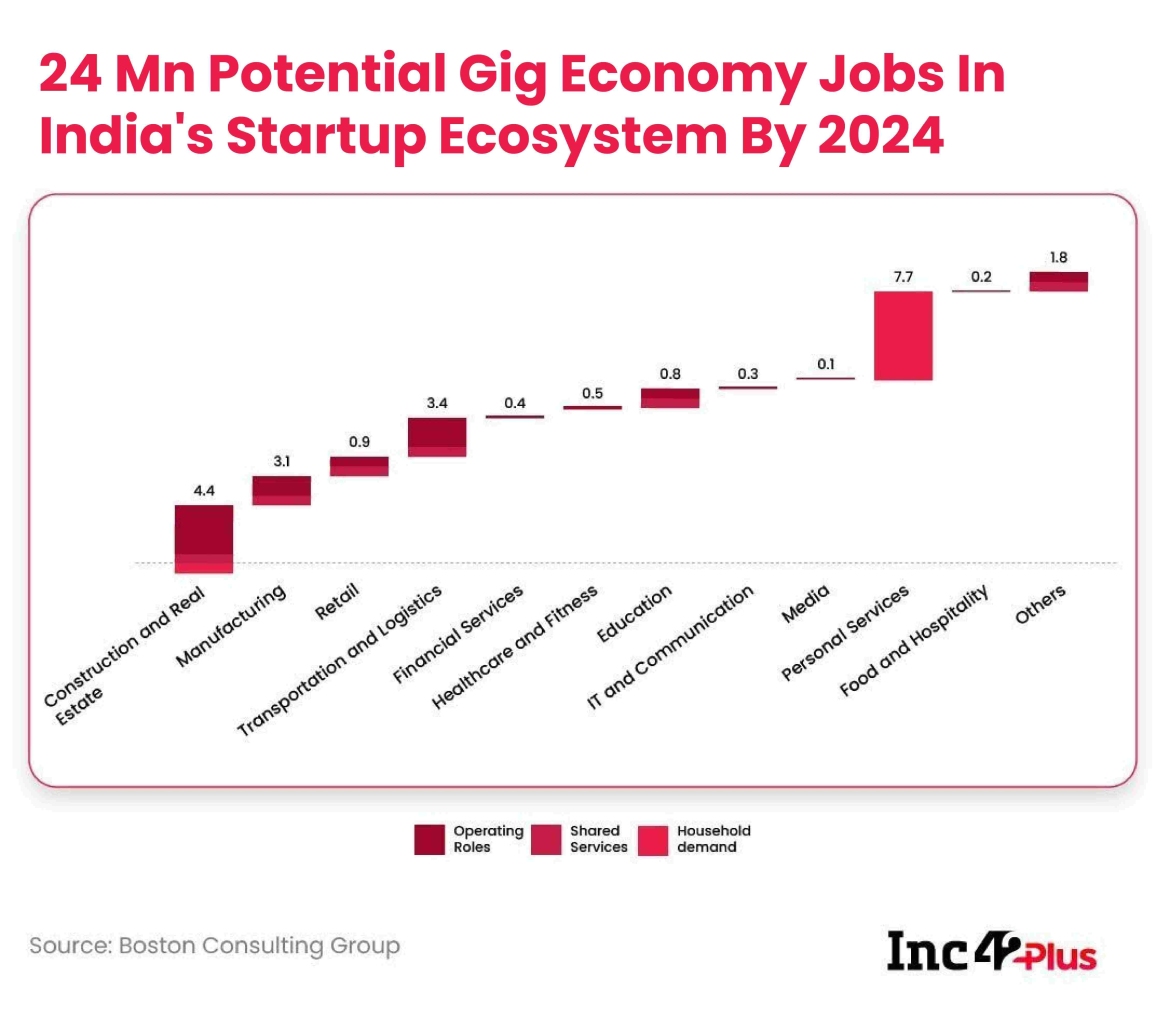 This 10X jump will come on the back of ‘giggable’ jobs in the construction, manufacturing, retail, and transportation and logistics sectors.

Is The Gig Economy Growing Too Fast?

While the focus thus far has been on Zomato and Swiggy, which we covered in a special report on food delivery workers this week, the gig economy is spread far and wide and it would be pertinent to take a look at how entrepreneurs and startup founders see the landscape and how they are solving the key challenges.

This, at a time when a record amount of funding is coming into this sector, with blue and grey collar networking platform Apna entering the unicorn club.

In September alone, we have seen plenty of capital being poured into this sector — Apna raised $100 Mn at a valuation of $1.1 Bn, while Bengaluru-based gig jobs marketplace Vahan secured $8 Mn in its Series A, and BetterPlace raised $24 Mn to join the frenzy.

Besides this, Urban Company also entered the unicorn club in June this year with a mega $255 Mn round. These deals indicate that the gig economy is about to see a massive inflection point in the next few months.

Like every year, this year too, the ecommerce giants Flipkart and Amazon have stepped up their hiring in the gig economy as the festive season arrives. Walmart-owned Flipkart has launched a new marketplace ‘Flipkart Xtra’ to onboard part-time delivery partners by allowing flexible earning opportunities to individuals, service agencies and technicians, as it looks to bolster its supply through 4,000 temporary workers during the upcoming festive season.

As tech platforms, marketplaces and aggregators continue to achieve scale, the gig hiring will rise multifold. One founder told us if automation and robotics are seen as a threat to jobs, the gig economy is the saviour.

“Computers can do a lot but businesses still need humans to do the rest and that’s where the gig economy will come in. I believe the future of work will be having gig jobs,” the founder said on the condition of anonymity, adding that one worker may need to have diverse skills to meet seasonal demand. 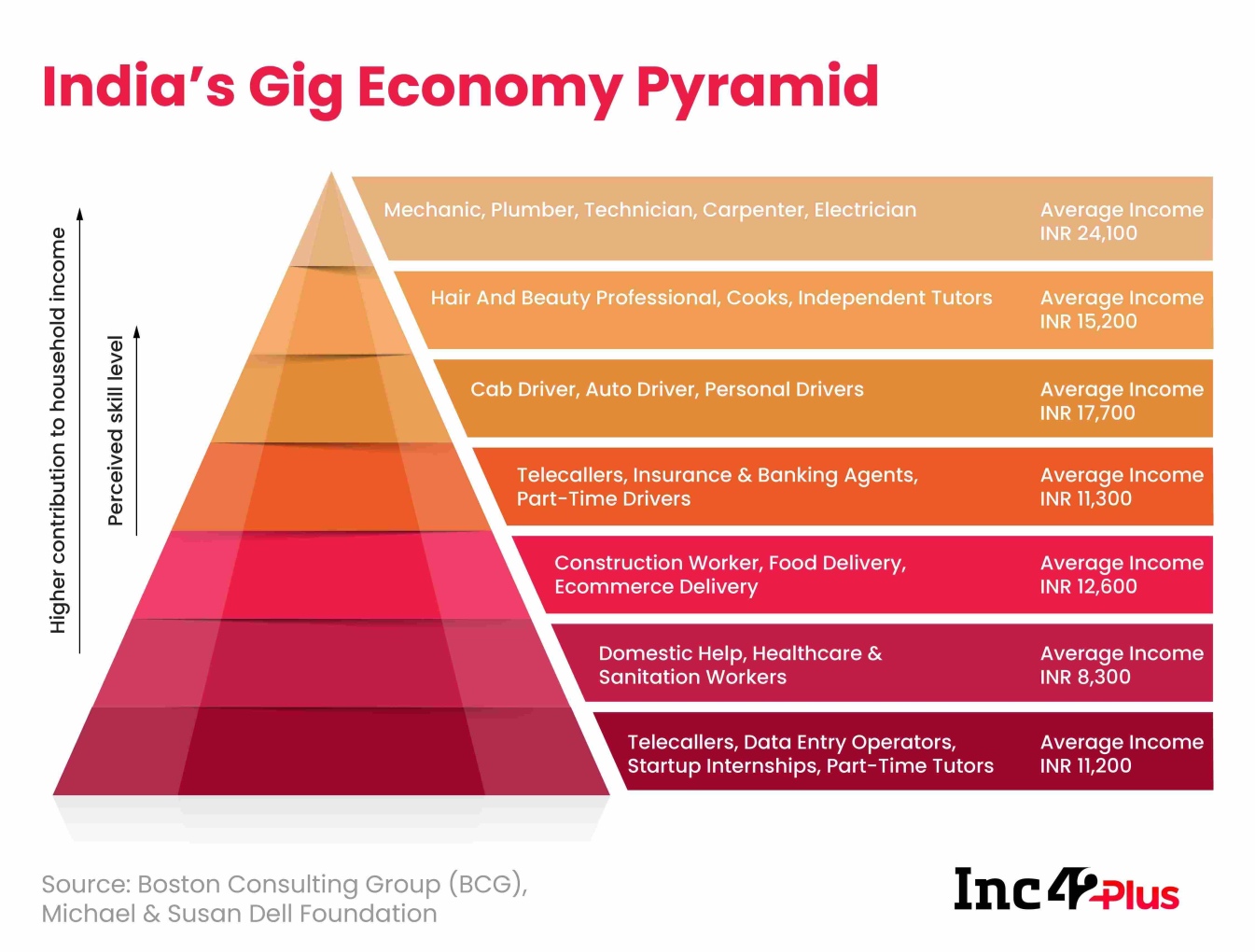 Jobs Will Come, But Will People Be Ready?

Job motility or moving from one sector to another is a significant disadvantage for gig workers at this moment, along with the lack of income stability and no guarantees of upward mobility on the job.

That’s because it’s nearly impossible for a driver to earn enough through driving (considered a low-skill job) and also gaining the technical knowledge needed for maintenance or repair (mid to high-skill jobs). Despite driving being a gig job, it takes up 12-14 hours of the day for six-seven days a week, and it’s hard to upskill oneself in the time left.

The same can be said for someone who is a construction worker or beauty professional — it’s just not possible for some of these workers to migrate to other jobs.

Once a driver, always a driver — that’s a big fear among gig workers as highlighted by a BCG survey on the biggest concerns for such part-time workers.

“Going forward, most gig economy companies will have a growth track for gig workers. At the moment, no one is doing today, but upskilling will become part and parcel of every gig job in the future,” said Sahil Sharma, founder of GigIndia, which offers companies on-demand access to gig or temp workers.

Has The Problem Already Been Solved?

You might have noticed that we are looking at issues beyond the basic pay and salary debates that dominate gig economy discussions. That’s because according to founders and market analysts, the problem of income guarantee and social security has already been solved.

Last year, India passed the ‘The Code on Social Security, 2020 in order to amend existing legislations that addressed unorganised or gig workers with no employment contracts.

The new code also sought to replace the number of existing labour legislation including the Unorganised Workers Act, 2008. It recognised “gig workers” and “platform workers” as unorganised workers. But this code is yet to be enacted after being deferred earlier this year.

A recent PIL has challenged the central government over this inaction and argued that gig economy workers fundamentally lack the legal right to livelihood due to the actions of aggregators, and sought urgent intervention from the Supreme Court.

On a broader level, the social security code is a welcome move, but it needs to be enacted swiftly. Red tape and bureaucratic delays are a major barrier to policy implementation. Companies that consulted the government on the code wonder what’s taking so long in rolling it out.

Gig economy platform founders believe that 90% of the problems in this space will be solved once the code is rolled out. Once income stability is offered through provident schemes or minimum guarantees, the reality is that most workers want to only do gig work because of the inherent flexibility. Right now, it’s like a full-time job but with none of the benefits.

Social security spending is currently not mandated, but in the first year alone, an estimated INR 400 Cr – INR 500 Cr would have been allocated to the security fund. “If it had been implemented this year, when the second wave hit, all these workers could have gotten access to those funds.”

Besides the social security code for unorganised workers, among the many ideas floating about In India, there’s talk of a UPI-like platform that could help gig workers get more opportunities, connect with employers and upskill themselves.

The formalisation of the gig economy is only just beginning now, but given the number of people it will impact, the policies cannot be rushed.

In the past, startups have had to suffer the impact of ambiguous policies in taxation and other compliance, but this time around, any uncertainty will impact more than just startup founders and investors — there are millions of livelihoods at stake. So it’s a case of better late than never.