Will Paytm’s Transition Beyond Payments To Broader Fintech Play Lead To IPO Success?

Will Paytm’s Transition Beyond Payments To Broader Fintech Play Lead To IPO Success? Paytm has a stronger acquisition channel for its core business of payments through UPI, cards, Paytm Wallet, Paytm Postpaid and other digital financial services

Fintech giant Paytm is all set to go for a massive initial public offering with plans to raise INR 21,800 Cr ($3 Bn) in the IPO by November this year. And one of the key strengths for the company is said to be its diversified business model, that is tightly linked to the Paytm Payments Bank and Paytm Payment Gateway, which enables the full stack payments play as well as a clutch of financial services verticals, helmed by experienced domain experts.

Paytm is said to be on track to break even in 12-18 months and is expected by market watchers to be a major force in the payments and fintech market because of its diversification. 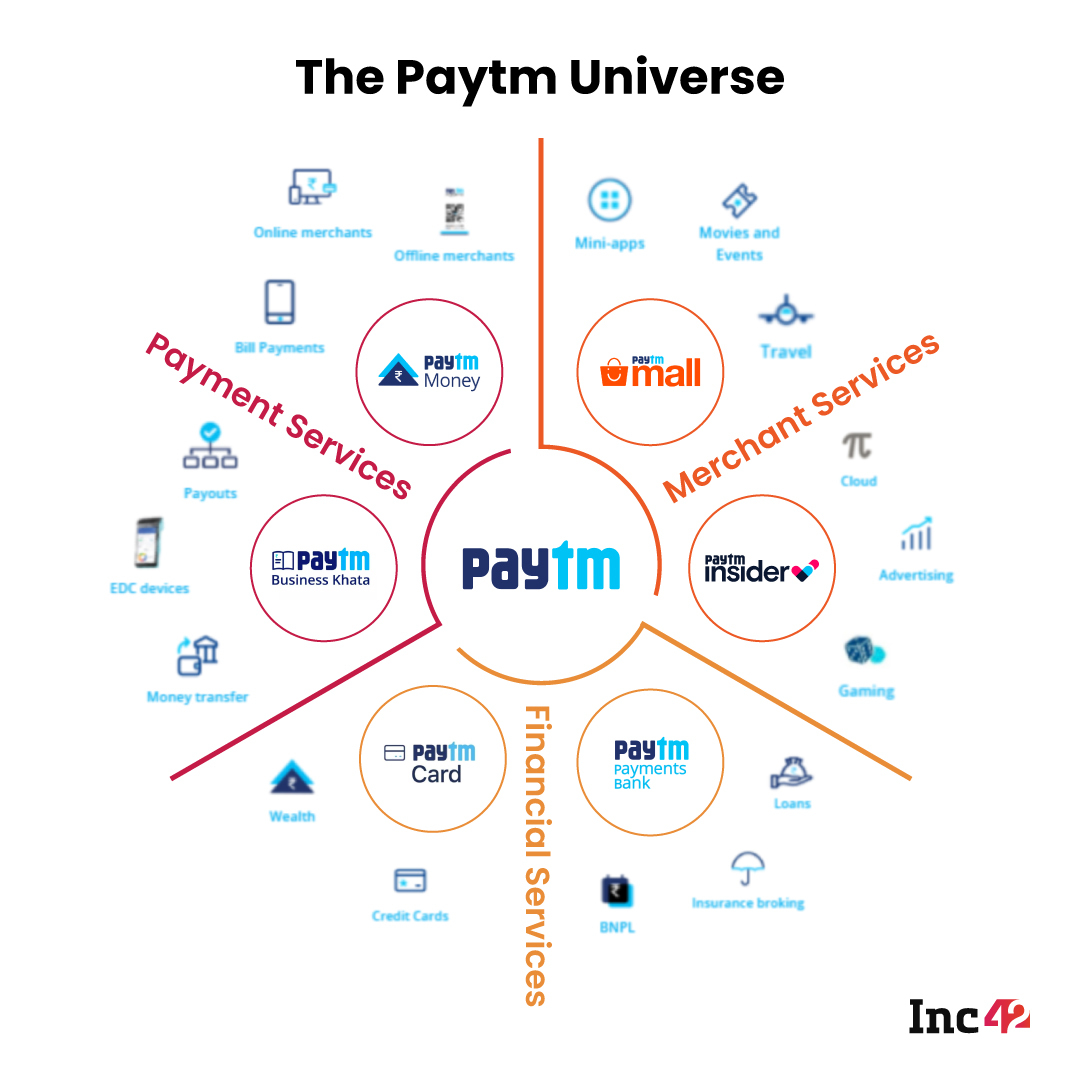 Paytm has chosen to create value through building multiple businesses around the core Paytm brand. Given that the Paytm Payments Bank has grown significantly and plays a critical role in the company’s payments and lending success, a key future objective for Paytm would be getting the small finance bank license, which would allow it to build a universal bank with a strong digital edge backed by fully digital onboarding and customer servicing on the app.

In comparison, the two major payments companies — Google Pay and PhonePe — rely on UPI heavily, and even though they have enabled new features and integrations, they are not as tightly knit as Paytm with its payment bank license, payments gateway, lending through postpaid business as well as a slew of other financial services. Here’s a look: 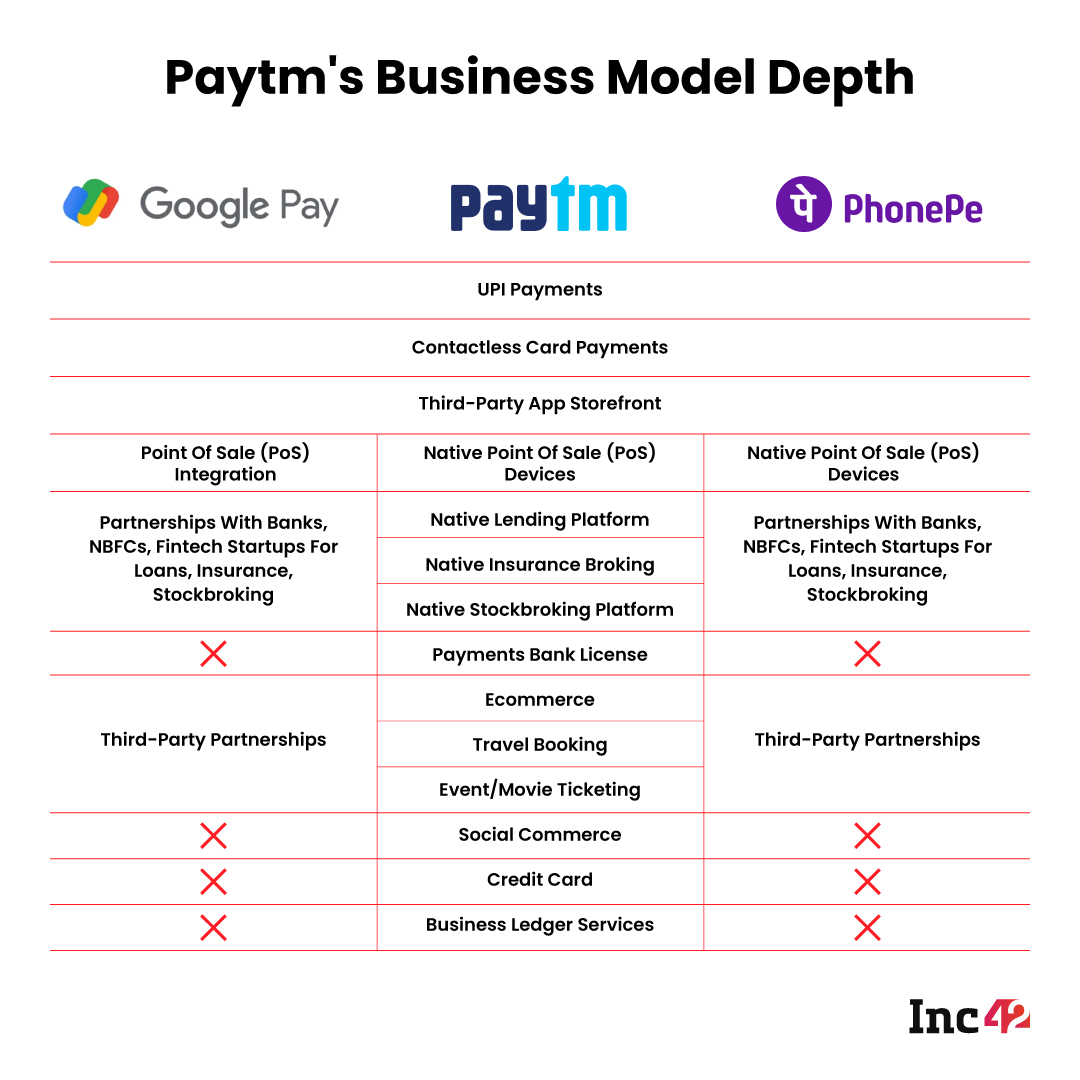 This has resulted in Paytm having the lowest failure rate among UPI apps, and also significantly little to no dependency on UPI payments for overall revenue growth.

How Paytm Fared Against Payments Rivals In FY20

Given that Google Pay and PhonePe are yet to file their financials for FY21, we cannot compare them with Paytm yet for the last fiscal year. However, the latest data from National Payments Corporation Of India (NPCI) for the month of May, shows that Walmart-backed PhonePe increased its share of customer transactions (by value) marginally month on month. 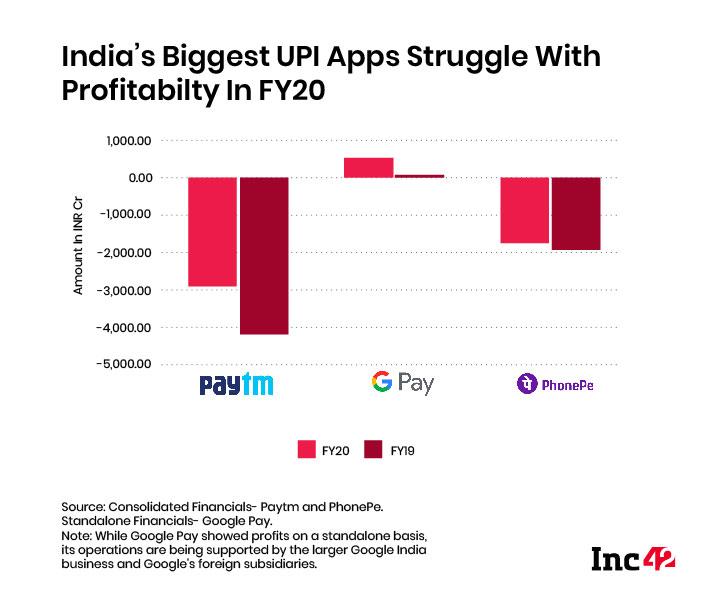 Paytm is not a major player in the UPI market, and this is by design. It has focussed on a lot more than payments to grow its revenue base, as indicated by its revenue from non-payments sources.

On the face of it, the massive UPI numbers look impressive, but they hide a stark reality — none of the industry leaders, be it Google Pay, PhonePe or Paytm — made much money from their UPI offerings, thanks to the existing zero MDR policy.

While Paytm may not have a commanding market share in terms of UPI transaction volume. Paytm Payments Bank maintained its lead as the largest beneficiary bank on UPI with 430.04 Mn transactions in April 2021, even though the transaction went down 8% compared to 469.8 Mn processed in March 2021.

Due to its diversified business, Paytm saw its revenue grow to INR 3,629 Cr with 30% reduction in losses to INR 2,942 Cr on a consolidated basis. It claims to have 17 Mn merchant partners and 600 Mn registered users (as of September 2020) has already diversified its revenue streams, which has led to almost zero reliance on UPI for growth. As evidenced by its pre-IPO numbers, Paytm has shed its dependence on payments for revenue. 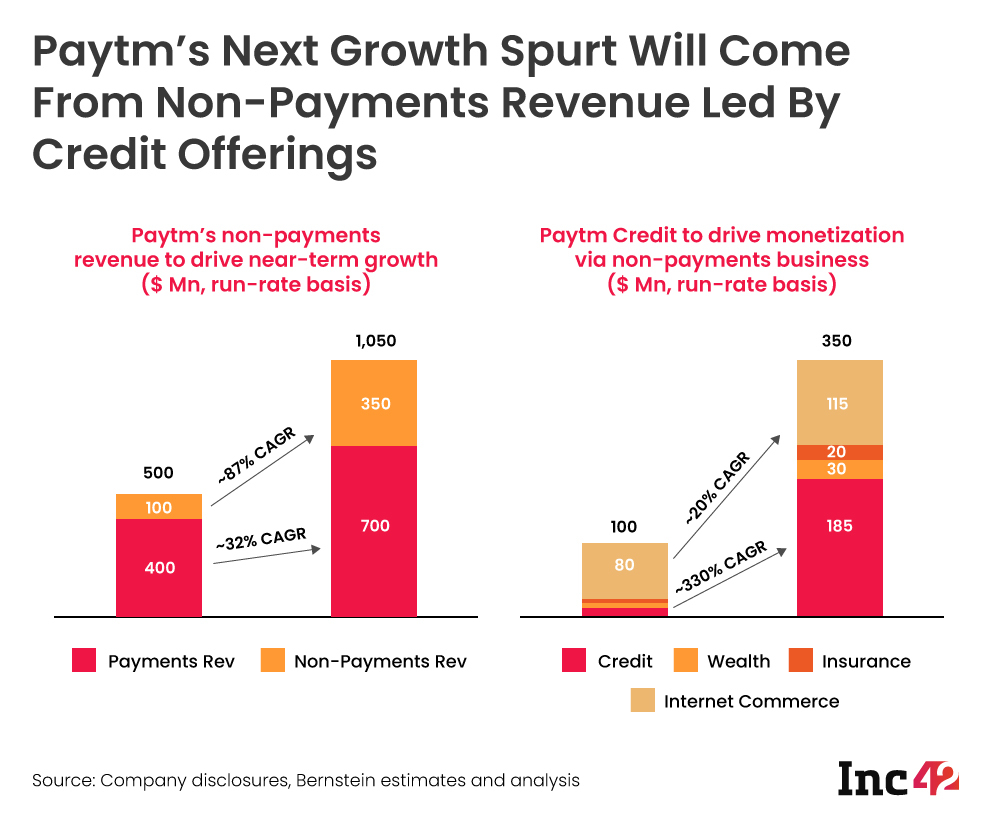 Unlike Paytm, Google Pay, for instance, is highly dependent on UPI. Instead of providing its own investment, insurance or lending services, it has roped in partners for these channels and earns commissions on those transactions. For Google Pay users, peer-to-peer transactions, bill payments and small-ticket merchant payments are the primary draw.

The company grew in popularity due to the ease of UPI use as well as various cashback offers and rewards users win for most transactions. Incidentally, Google Pay, as a standalone entity, is just a small part of the Google India business. Google India reported a revenue of INR 5,593.8 Cr and a profit of INR 586.2 Cr in FY20.

Google Pay’s India standalone financials indicated that the company’s profit for the fiscal year ending March 31, 2020 (FY20) stood at INR 33 Cr, a 6.5x growth from the last fiscal year’s profit of INR 5.1 Cr. It reported a 37% revenue growth to INR 1,501 Cr and its profit margin increased 4x in FY20 compared to 2.19% in FY20. Interestingly, Google Pay also received INR 1,159.6 Cr from Google Asia Pacific as reimbursement for cost of rewards (cashbacks given to customers).

That is as much as 77% of its total income for the year. But the company’s financials do not reflect this. Hence, it is unclear whether its UPI-alone business made a significant contribution to the profit growth.

PhonePe, which claims to have 15 Mn merchant partners and 250 Mn users, was not out of the red, either, but its numbers were up in FY20. 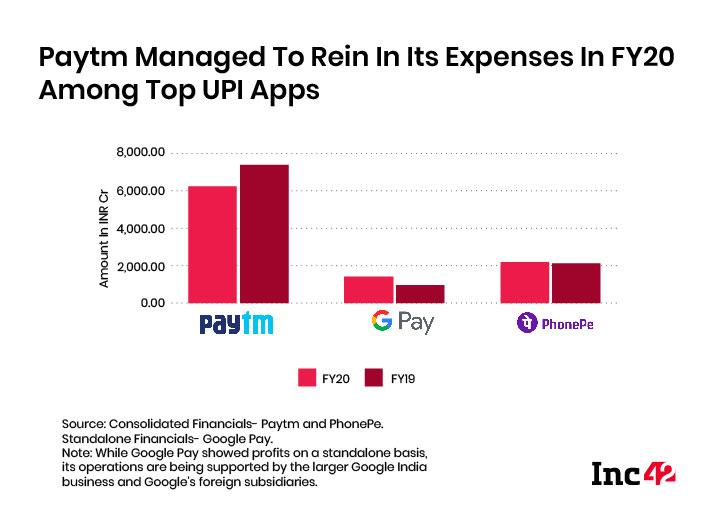 Among the key steps taken by Paytm, the company reduced advertising expenses by 57% to INR 1,483 Cr during the fiscal. The fintech giant managed to narrow its losses by 30%, but its revenue growth was a meagre 1.3% despite its diversified efforts. In terms of expenses, PhonePe saw a marginal jump of 2.3% to INR 2,202 Cr, although its expense-to-revenue ratio remained high, indicating a need for greater cost efficiency.

Google Pay and PhonePe are looking at more diversified services too. Walmart-owned PhonePe, which is also planning to launch an IPO by 2023 as per reports, has looked to move beyond the broken revenue model on the UPI. 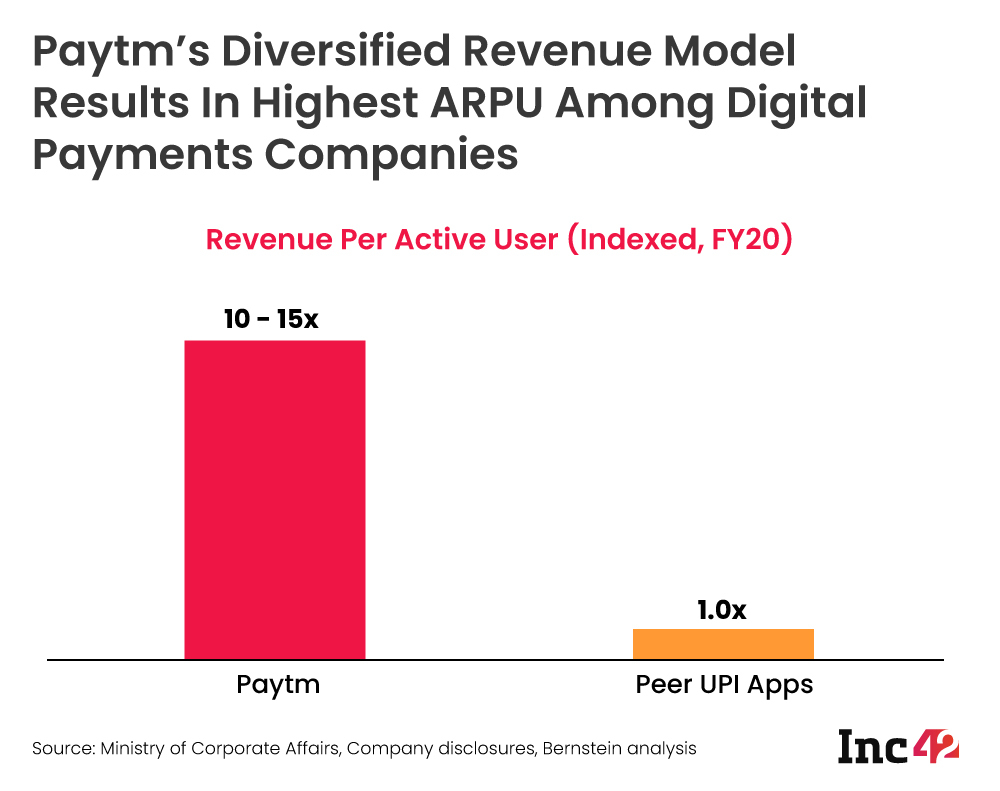 PhonePe has entered a few lucrative segments and tested the waters. These include PhonePe Wealth Services (a mutual fund distributor), PhonePe Insurance Broking (a third-party insurance distributor) and PhonePe Technology Services. Will it have the same effect on its revenue and overall balance as it did for Paytm? 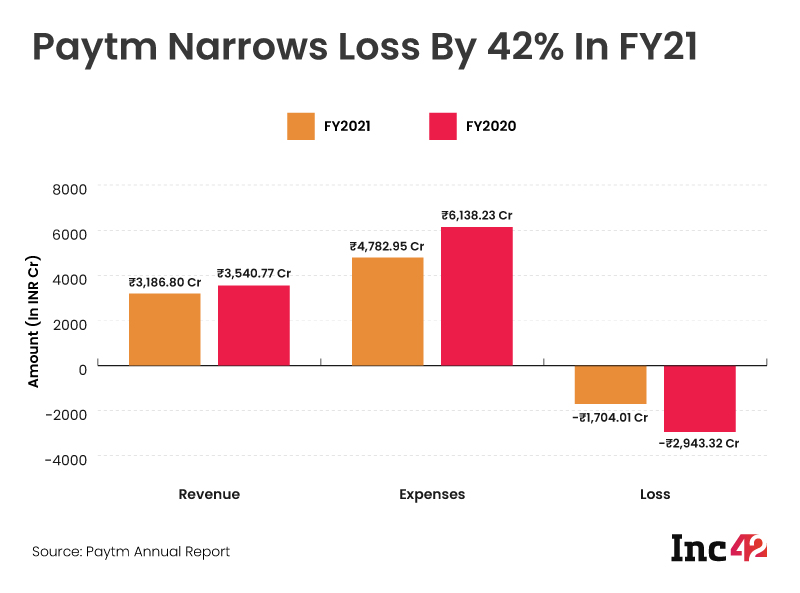 Expected to file its draft red herring prospectus with SEBI by next month, Paytm said in its financial statement that its earnings per share has improved from negative (-) INR 488.13 in FY20 to negative(-) INR 281.69 in FY21.

As it goes forward and looks at taking on the competition in the broader fintech landscape, Paytm would need to further reinforce the diversity of its revenue model. Besides being one of the largest IPOs in India, Paytm is likely to become the first publicly-listed fintech company in India. The biggest challenge for the startup will be to achieve profitability on the back of its chief strengths.

With inputs from Romita Majumdar