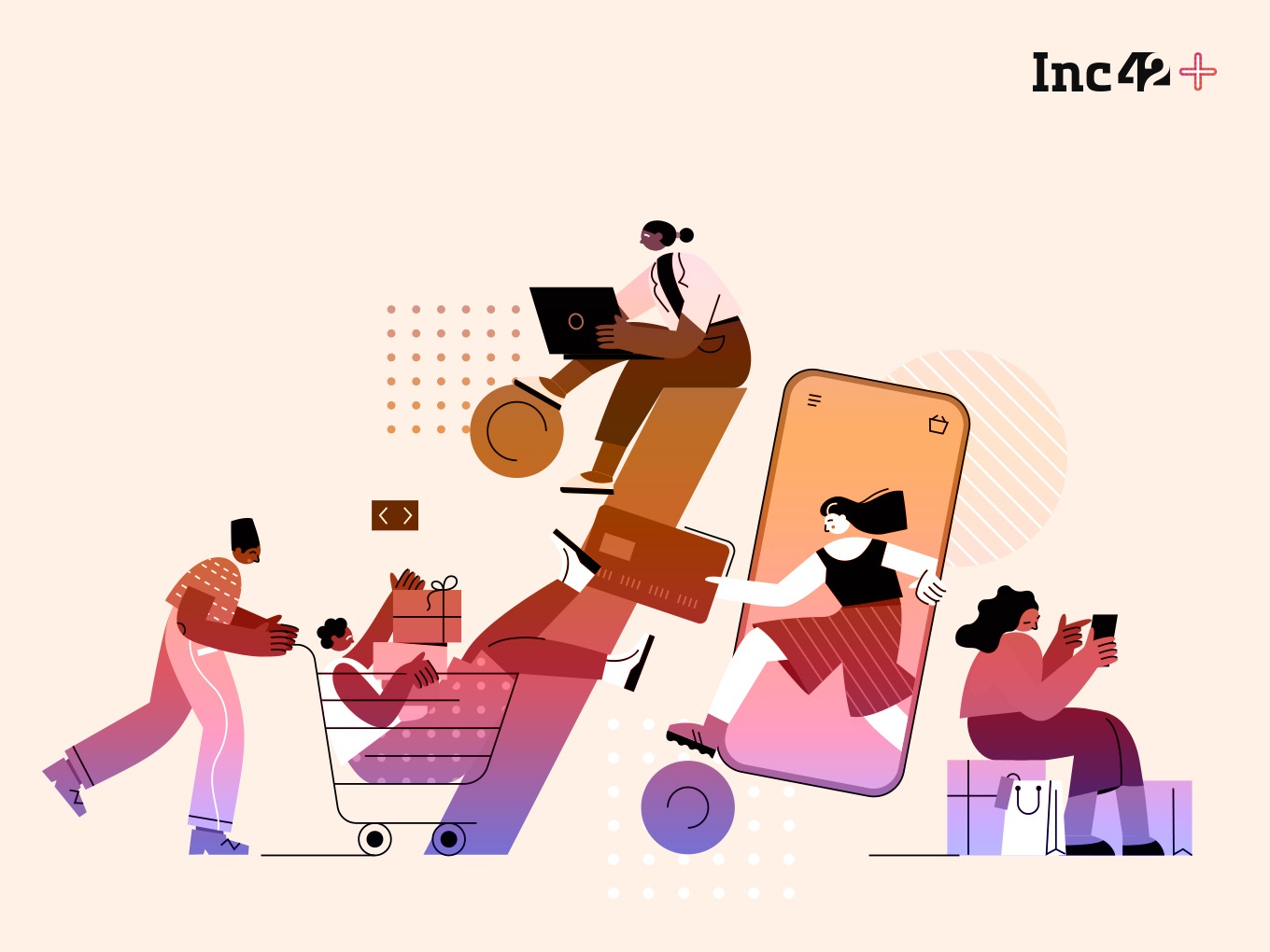 In the last few years, hundreds of Indian new-age brands have bid farewell to middlemen and taken the D2C route. This has helped them acquire the right insights and build long-term relationships with consumers

After the pandemic, more brands are bypassing the intermediaries to reach consumers faster and with more efficiency. Traditional brands have also woken up to the benefits of D2C

As part of our fifth Playbook, exclusively available for Inc42+ members, we will be talking to multiple brands, logistics tech players, industry experts to get a 360-view on India’s D2C rush

As more and more consumer brands go digital to reach customers faster and carve a unique identity, India’s direct-to-consumer (D2C) moment is well and truly here. With thousands of brands competing in the D2C space, will this be the future of India’s retail market?

Do you remember the time when an Eureka Forbes executive would knock on the doors of your home in crisp formals with a bag full of fancy catalogues and politely ask you to allow him some time to explain his product such as water purifiers and vacuum cleaners? You would happily open the door, perhaps even offer some tea and even have conversations about the home and other aspects. It was as if a guest had shown up at the door and not a salesman.

This sepia-tinted memory of the 90s for many of us was also the beginning of organised direct selling in India. And in 2020, direct selling is back, albeit in a digital avatar and instead of knocking on the door, brands are today knocking down major barriers to reach consumers whether they can. The advent of D2C (direct-to-consumer) model has seen new-age digitally native brands skipping the multiple layers in a traditional supply chain, including retailers, wholesalers and distributors, to go straight to the consumer through ecommerce or just an app. 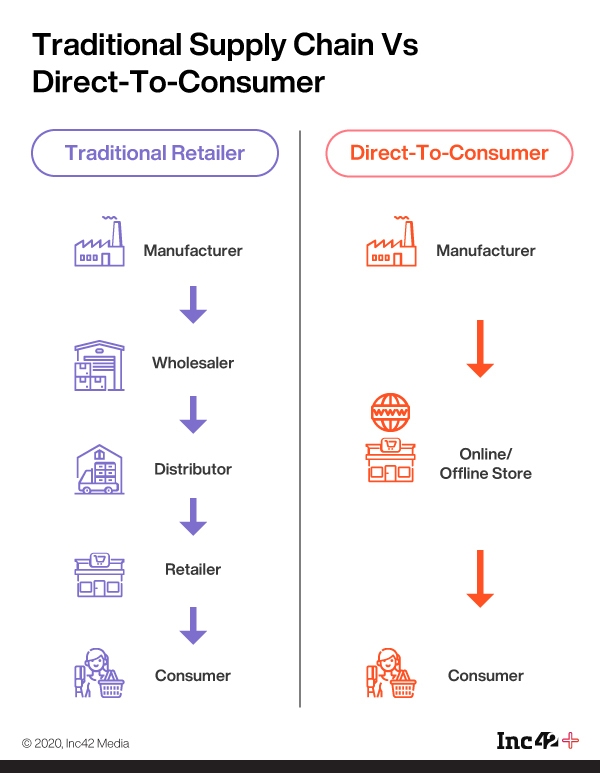 Industry experts believe that the future of retail growth will come from such direct consumer relationships that promise better and quicker customer feedback.

“The ecommerce penetration is still in single digit percentage points as compared to the US where it’s above 15% for most categories. Therefore most D2C brands are still in their first innings in India, however, we expect significant growth in this segment in the next five years,” said Rohit Krishna, general partner, WEH Ventures, which has invested in D2C brands Henry and Smith, and Noto, told Inc42.

That explains why series of Indian brands have gone the D2C way, it’s also why our fifth Inc42+ Playbook is focussed on India’s D2C rush.

Direct-to-consumer brands are companies that manufacture, market, sell & ship their products to customers without relying on middlemen like distributors or traditional stores. D2C companies are almost exclusively “digital-first”, i.e. either started digitally or where digital channels act as the primary point of engagement (marketing and sales, customer support, fulfillment, returns, and exchanges) with consumers.

D2C brands distribute their products primarily via their own branded channels. These channels may be an ecommerce website or platform, social media or a retail store. Physical stores by D2C brands are primarily designed to boost brand awareness and customer engagement that will encourage more sales online.

In India, there are over 500+ riding the D2C wave, according to DataLabs by Inc42+ analysis.

The D2C segment has already seen startups and brands emerging in key areas — mattress brands such as Wakefit, Sunday, Sleepycat; fashion startups such as Bombay Shirt Company, Henry & Smith, Label Life, cosmetics brands such as Sugar, The Man Company, Mamearth, The Moms Co well as traditional retail players such as Saraf Furniture, Specsmakers, Marks & Spencer and others have also been opening online stores, hinting at a major change in the retail landscape.

Through the upcoming articles in the ‘India’s D2C Rush’ playbook, we will get into the minute details of the various aspects within the D2C space and how brands are adjusting to the new demand spike. We would be diving deep into how startups and brands have customised their models and customer acquisition strategy in fashion and accessories, FMCG, consumer electronics, home appliances, home decor and other categories.

The Evolution Of D2C In India

K Vaitheeswaran, who cofounded India’s first ecommerce company Fabmart.com in 1999, is often known as the father of Indian ecommerce. As per Vaitheeswaran, India is currently in the third phase of its ecommerce journey, which will see the offline retail strategies collide with ecommerce. 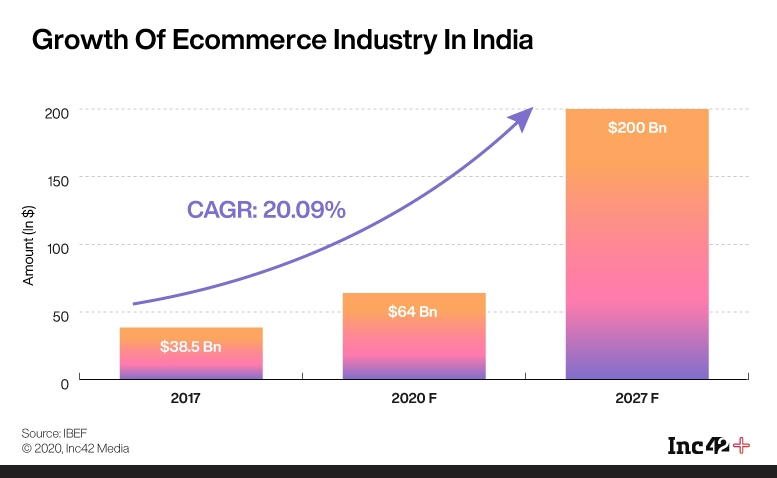 The Business Models Within

After the lockdown in March 2020, the importance of an effective supply chain has been largely felt and many brands are waking up to the benefits of D2C as an effective business model. For instance, Country Delight, the milk delivery company, which has a complete control over the distribution channel, could operate on a 98% fulfilment rate within days after the lockdown.

“We follow a full stack business model, with end to end control starting from sourcing from the farmer to reaching the doorstep of the customer and thus we were the least affected by the pandemic,” Chakradhar Gade, cofounder of Country Delight told Inc42.

However, unlike Country Delight most brands are not pure-play D2C, that is they don’t have end-to-end control for from manufacturing to point of sale to reaching customers. Many still have intermediaries, including online marketplaces such as Amazon, Flipkart as well as logistics startups that support delivery. Most of India’s first generation D2C companies have been piggybacking on these channels of distribution and supply in order to scale up while continuing to build their own brand.

Through the playbook, we will be further exploring the reasons for the low number of pure-play D2C in India and many emerging business models, unique to India. We will also be looking categories that have gained maximum popularity and much more. 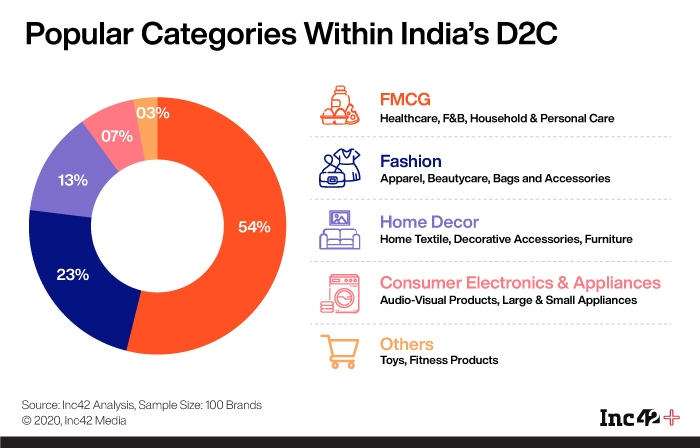 As with most startup sectors, the deployment of technology has been the key to driving D2C brands in the Indian market, especially those that help extract the most out of the acquired customers. Besides the need to create a unique brand identity, marketing, technology and supply chain hold the highest importance, as per the brands that Inc42 spoke to.

Brands opened up about how and why they chose a particular ecommerce platform or digitisation tool, how they have revisited their supply chain post Covid-19, and the marketing tactics and strategies that work in the Indian market, along with the mistakes and the learnings. 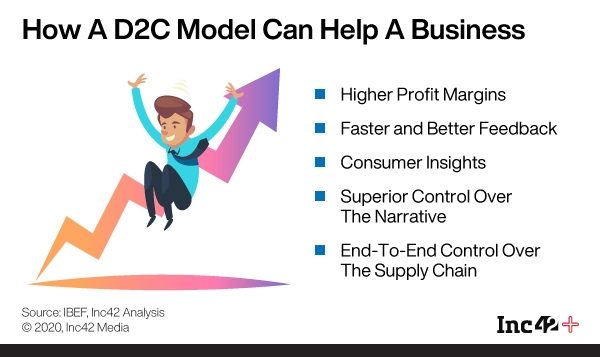 Unlike the past, when businesses needed a huge IT team and many months to launch an ecommerce website, today it is a matter of weeks and anyone can do it, thanks to new software application, a ready to use ecommerce platform software or SaaS tools offered by the likes of Shopify, Magento, Ecwid, GoDaddy GoCentral, Volusion and Wix Stores. In simple terms, the software helps a business sell products and services online, along with managing the website, the marketing, sales, and others.

However, today the tricky part is to choose the right platform for your brand as there are more than 120 different shopping cart software platforms out there promising almost similar features.

Through the playbook, we hope to shine a light on how retail brands and D2C products have opened up online stores, the analytical tools being used as well as the cost considerations.

However, just creating an ecommerce presence or a website is not going to serve the purpose unless backed by an effective marketing strategy.

The playbook will dive into how leading brands such as Pee Safe, Bewakoof are doing to be on top of the marketing game and how it plays a key role in driving growth even though it does end up being a major chunk of the expenses. From social media marketing, social commerce, video marketing, email marketing, content-driven purchases and more, new-age brands have tapped the influencer market and are gaining customers through digital word-of-mouth.

How effectively D2C brands manage the supply chain will determine the success to a large extent, especially after the pandemic. Companies such as Shadowfax, Locus, Shiprocket, Shipsy and others are solving the supply chain hurdles and playing a key role for D2C brands.

With many brands also outsourcing manufacturing, having robust warehousing and shipping operations through a third-party logistics provider is also key. The likes of Delhivery and others are making it easier for D2C brands to enable countrywide deliveries.

Are Indian Brands Going Beyond Borders?

With the playbook, Inc42 will also be looking at the possibility of creating a D2C brand that can grow beyond India. Well, many Indian brands have been making a mark globally for some years, including the likes of Fabindia, the Madura Fashion and Lifestyle-owned Peter England, Bira91 and others have also been able to spread their wings beyond the Indian market.

Beyond taking a look at some of the major startups in the D2C space, we would also be diving deeper into the model and the strategies that have worked for some of the up-and-coming D2C brands, as well as those making the transition to the online sphere.