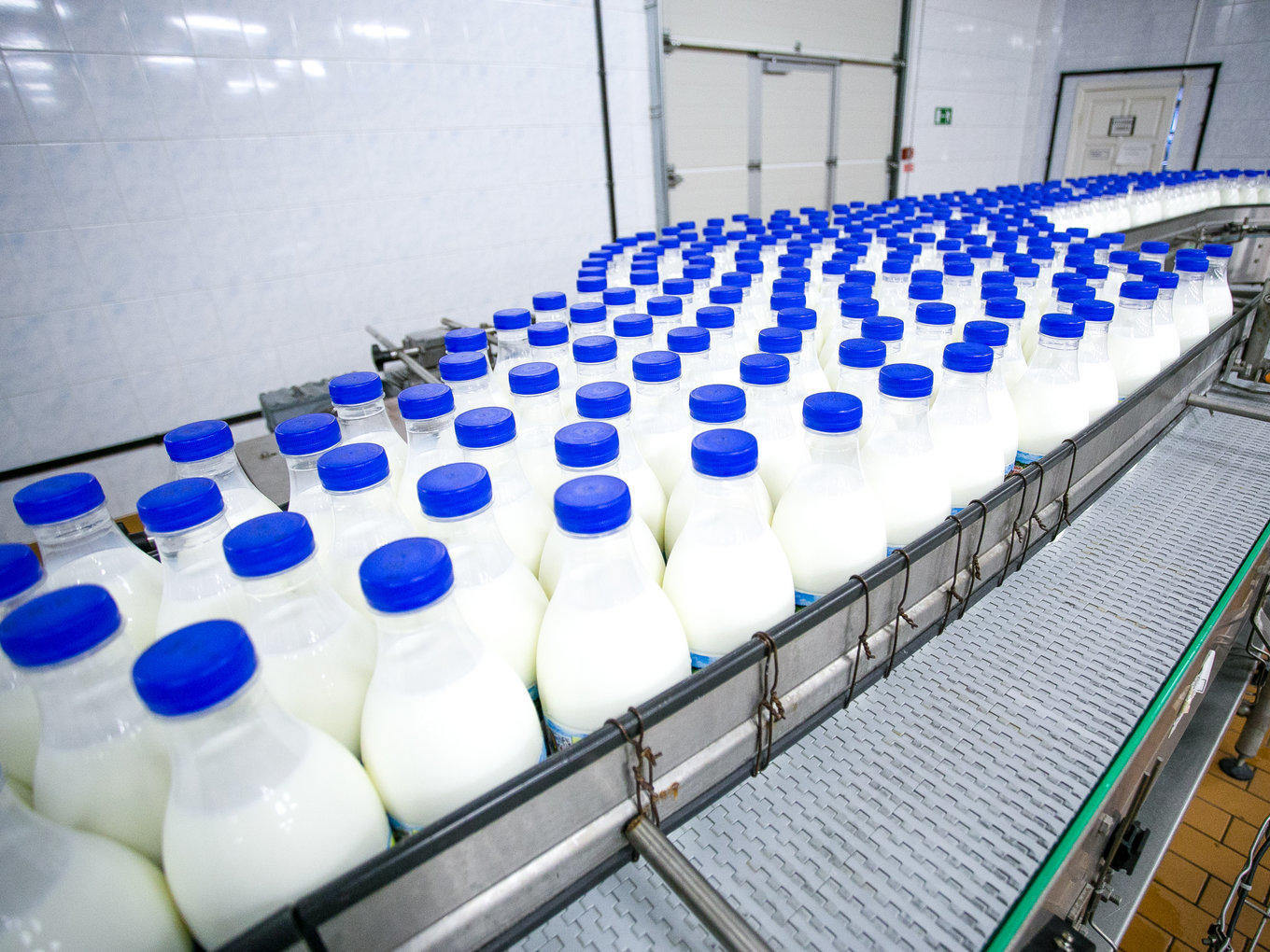 From wearables to cattle monitoring through drones, technology has resulted in burgeoning incomes for dairy farmers

Cows — one of the most central figures in Indian polity today. Even though cows have zero actual say in what happens in the country on their behalf, one definitely gets a feeling cows (and the people who own them) sometimes have more influence than common man on the course of everyday tasks. Of course, the fervent adulation for cows is not new in the Indian context, and even the not-so-devout Indian would admit the special place cows have held historically in Indian culture.

Beyond spiritual connections, cows have been the primary source of sustenance and subsistence for many Indians for millennia. And that in itself makes them sacred for many.

Within the context of the dairy industry and agriculture, cows are actually vital participants in the economy. According to the latest livestock census report, the number of cows in the country has seen a sharp increase of 18% in recent years.

And this population growth spurt has been accompanied by the rise of dairy tech startups. Not only are they working to help improve the quality of the milk produced, but some are looking at organic dairy farming, improving animal and farmer welfare, and solving problems in the business and management of dairy farms.

Part of the reason for this rising tide of dairy tech startups is the government’s push for protection and welfare of cows through various welfare schemes.

With an initial corpus of INR 500 Cr, the Indian government set up the so-called Kamdhenu Aayog in February this year. It works towards being a growth engine for new dairy or cow welfare businesses. As part of the initiative, it was announced that startups focussed on commercialising cow products will receive 60% of their initial investment as government funding.

The government initiatives, startup boom, growing digital consumer base and newer technologies including blockchain and IoT devices have sprouted many dairy tech players. The likes of Happy Cow, Akshayakalpa, Country Delight, Good Cow Company, Shudh Farms and Satvik are milking money and even expanding to newer locations as the White Revolution and Operation Flood of the 1970s and 1980s take on a digital form.

Since 2014, India began celebrating November 26 as the National Milk Day in memory of Dr Verghese Kurien, the father of the White Revolution. And when the occasion rolls around this year, there will be a lot of focus on dairy tech as well.

India produces 160 Mn tonnes of milk in over 75 Mn dairy farms per year for a market that is worth around $30 Bn, according to the Food and Agriculture Organisation. It has the largest cattle population in the world and is the second-largest milk producer after the US. The dairy industry is expected to maintain 15 per cent CAGR over 2016-20, Edelweiss Securities said in a report.  Along with this, the Indian online grocery market estimated to grow at a compounded annual growth rate of 62% between 2016-2022, and many dairy tech platforms are also looking to cash in on this growing market.

For decades the dairy space was majorly dominated by Amul, Mother Dairy, Aarey, Parag Milk Foods and few others. The last few years have seen the genesis of dairy tech startups that control the whole supply chain, from helping run dairy farms to sourcing milk to delivery without many middlemen, within 24-36 hours. 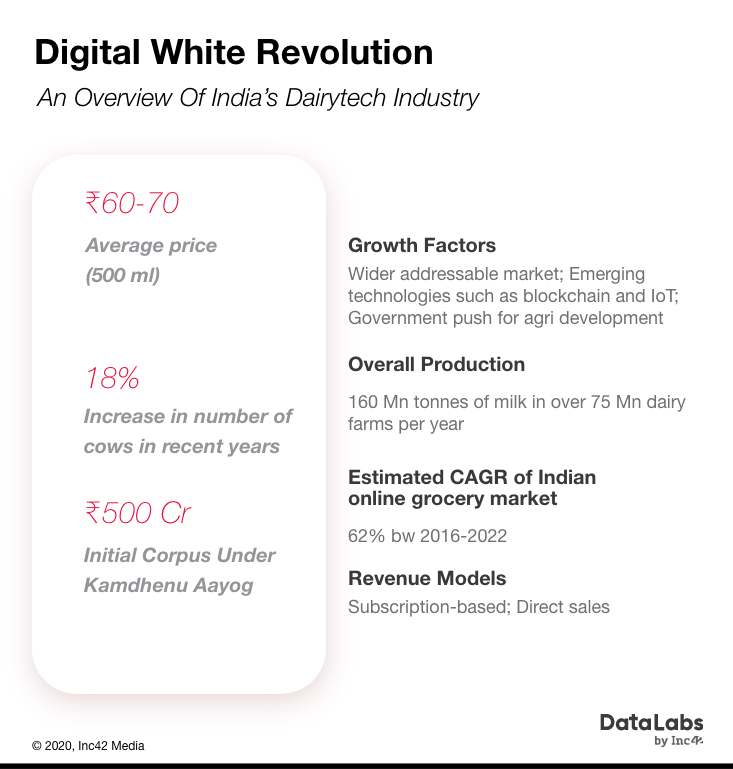 These startups have carved out plans to scale up their businesses. HMS Milk, owned by Varenyam Farms, announced that it would increase milk production to more than 10,000 litres a day and achieve a pan-India presence by 2022. “The robust reverse logistics and sales prediction modules have allowed dairies to get insights on projected sales for the next seven days. Our platform generates detailed reports around loss-making routes and leakage losses, while simultaneously tracking crates, helping keep losses to a minimum,” Mr Milkman founder and CEO Samarth Setia, told Inc42.

Happy Cow Dairy, a startup which aggregates milk from dairy farmers in rural Maharashtra, raised INR 4 Cr to take the cooperative idea to the digital realm. According to a media report, within four months of operations, it had racked up INR 6 Cr in revenue and was looking to use the capital to set up up to 150 centres in two years.

The dairy tech startups that focus on consumers have also managed to grab success. Shudh Farms, located in the outskirts of Chennai, invites consumers to feed cows and watch them graze. It charges around INR 70 for half a litre as against INR 12, which is typically offered by conventional milk brands. However, it claims that people are aware of the consequences of adulterated milk and are willing to shell out extra cash for good quality milk and for the experience of being part of the process.

Milk delivery platforms have also been entering the untapped space at a fast pace. While Doodhwala has closed operations for reasons undisclosed, other players are achieving growth targets. Among the reasons speculated for its shuttering are a potential acquisition by supply chain and delivery startup FreshToHome.

Gurugram-based Milkbasket, which later transformed into a full-fledged grocery delivery service, is planning to expand its services to epharmacy too. The company, founded in 2015 by Anant Goel, Ashish Goel, Anurag Jain and Yatish Talvadia, has already raised $28 Mn in funding in total. However, the challenges of the ecommerce sector, the huge amount of capital required for expansion have forced it to scale down its operations and focus on the core markets.

DailyNinja also has gained popularity and currently reaches close to 40,000 households every day with a monthly active user base of close to 55K households in Bengaluru and Hyderabad. BigBasket is close to acquiring DailyNinja, according to reports, though both companies have denied the speculation.

Milk has been an important part of the morning routine at Indian homes for decades. However, the fear of adulteration and health hazards led to many consumers ditching milk altogether. Then there is the growing awareness for lactose intolerance which has resulted in a spike in demand for speciality milk.

Milk currently produced in India is either from crossbred Dutch and Indian cows, buffaloes or Jersey and Holstein Friesian breeds. These cows are also said to be injected with hormone supplements or antibiotics for increased milk production, which makes them less natural than organic milk.

“Our core focus is on producing pure, fresh, hormone-free and preservative-free dairy and whole food products that’s entirely free from any adulteration,” Amit Sharma, cofounder and director of NutriMoo

Many dairy tech startups, however, claim to produce milk through unconfined non-injected cows that feed on organic fodder. Though demand for organic farm fresh milk hasn’t taken off completely in India with pricing and lack of trust being two primary reasons, it is expected to grow exponentially. The startup space is mainly led by a lot of young professionals, IITians majorly, who have quit their cushy MNC jobs.

Some of these startups are helping farmers by addressing issues such as diseases and antibiotic overuse. Bengaluru-based Akshayakalpa is one such startup; it procures milk from over 160 farmers across Channarayapatna, Tiptur, Arasikere and Chikkanayakanahalli districts in Karnataka and helps farmers set up smart dairy farms by giving financial and technical support.

According to Akshayakalpa, almost 30,000 consumers in Bengaluru now get zero antibiotics, zero growth hormones injected organic milk because of technological intervention. “For the farmers, 69% of the price the consumers pay for Akshayakalpa organic milk products goes to the pockets of the farmer. The average income of Akshayakalpa farmers is already fast approaching INR  1 lakh per month. Some examples are there where a female farmer (Nagaveni) is billing more than INR 3.5 lakhs per month,” cofounder and CEO of Akshayakalpa Shashi Kumar told Inc42.

Many milk delivery startups use a subscription model for distribution which gives them a lot of flexibility in terms of procurement and production. It eliminates the hassles of traditional offline and online grocery shopping, similar to how traditional milkmen work in India.

According to a report by Redseer, online groceries verticals have taken a lead in terms of monetising their customers through subscription-based models. They have converted about 30-40% to total consumer base to their subscription programmes.

Milkbasket, for instance, follows a subscription-based model. Along with milk, it delivers daily essentials like vegetables, eggs and beverages early in the day. The repeat and recurring orders are a big help from a revenue point-of-view and for upselling.

The report had also emphasised that pricing, cashback, discounts and other benefits are the key factors driving milk delivery. Leading players in the grocery delivery market — BigBasket and Grofers — have managed to adapt to the subscription model in under two years.

How Tech Is Changing The Game For Dairy Farms

Over the last few years, milk startups have brought in a digital White Revolution in terms of using technology to produce organic milk, say experts. From using wearables to monitor livestock to using drones to using blockchain to track supply and block adulteration to create a holistic farm-to-kitchen experience, technology has changed the face of dairy farming to a great extent.

“Our village-level milk collection centres are IoT-enabled and equipped with the latest machines running on solar power. We use real-time milk collection data and process this through cloud computing for instant quality checks, and 100% digital payments directly to farmers,” claims Happy Cow Diary.

Mr Milkman offers a cloud-based ‘SaaS platform’ with automated processes which enables dairy farms to track subscriptions, revenue, sales growth, payments and customer consumption patterns. It tracks real-time analytics of operations, from farm to consumer by tracking orders, delivery and inventory management. Technology helps avoid wastage by giving exact data on how much milk needs to be transported daily. “Dairies have vast operations, most of which are handled manually. This includes managing pouch leakages, crates, reverse logistics, and sales on spreadsheets or registers, which inadvertently leads to several losses going unnoticed,” added Serbia.

“Our platform automates processes across the value chain of a dairy operation, right from production to distribution and delivery.”

Farmers can now track and manage cattle’s health and nutrition as well through real-time feedback about milking frequency and production. For example, Happy Milk uses IoT devices to track the health of the cows and check the quality of milk produced. The company claims that it has roped in engineers from Israel and industrial equipment from Germany to ensure better quality. 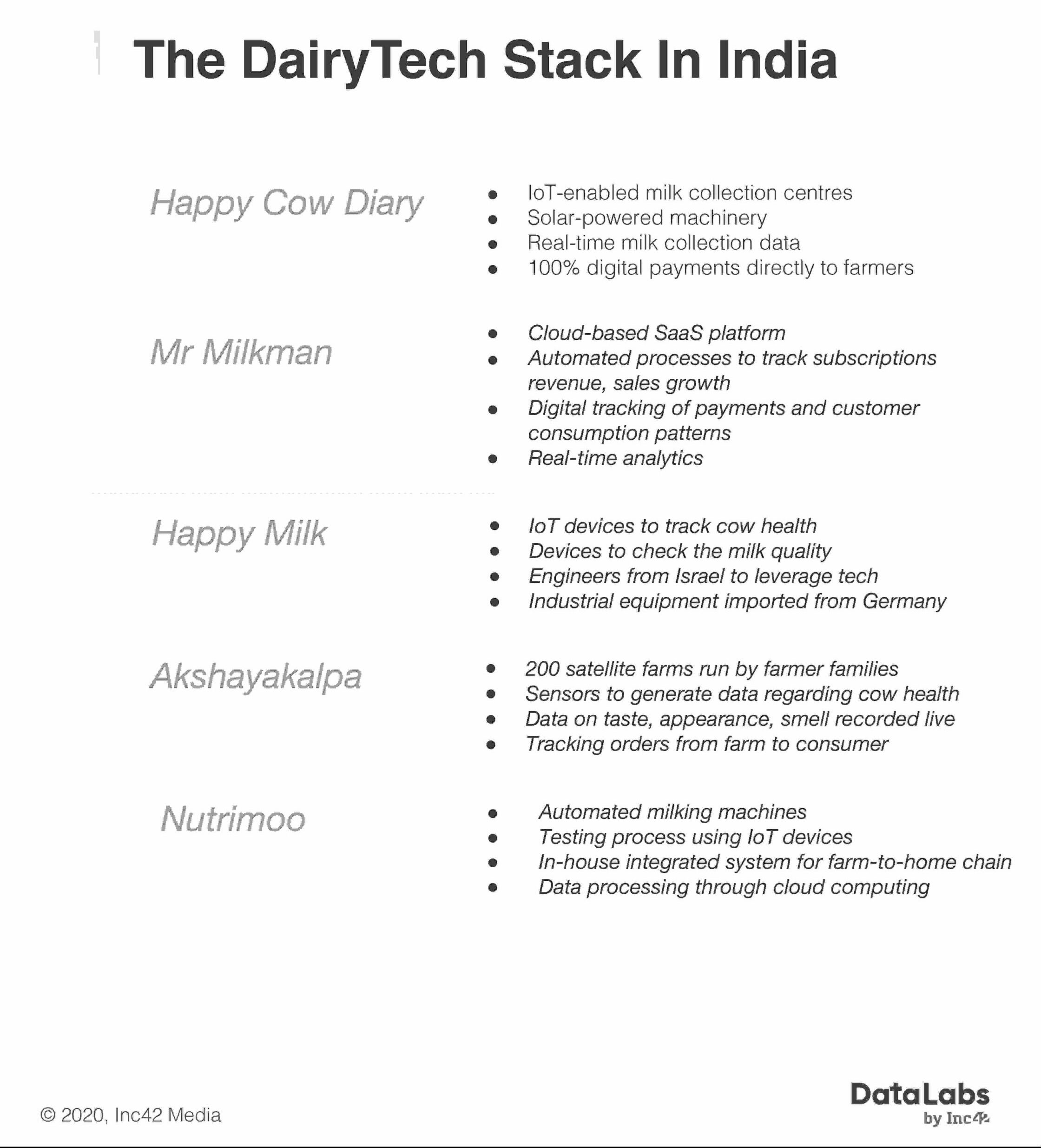 Akshayakalpa is made up of 200 satellite farms being run by farmer families with technological support in the entire process from milking to marketing.

“The aim is to help the farmer become a rural entrepreneur allowing him to earn a rewarding income in the process,” Kumar added.

Technology is used at every stage of the production of Akshayakalpa milk. The entire process is automated right from the milking machines to the collection in sealed containers and there is no human contact with the milk at any stage. Here is how:

Dairy tech startups fall into the larger agritech ecosystem and this is one of the most crucial sectors in the Indian economy as it marries technology with India’s traditional agrarian economy. With more players exploring the space, farmers are able to see direct benefits from the use of technology. While the cow may be a controversial subject in the larger debate about the current state of India, technology is helping carve a niche and make livestock and cows a viable source of income for many farmers, which is the biggest problem in Indian agriculture currently.

This article has been updated post-publishing with inputs from a few more dairy tech startups.