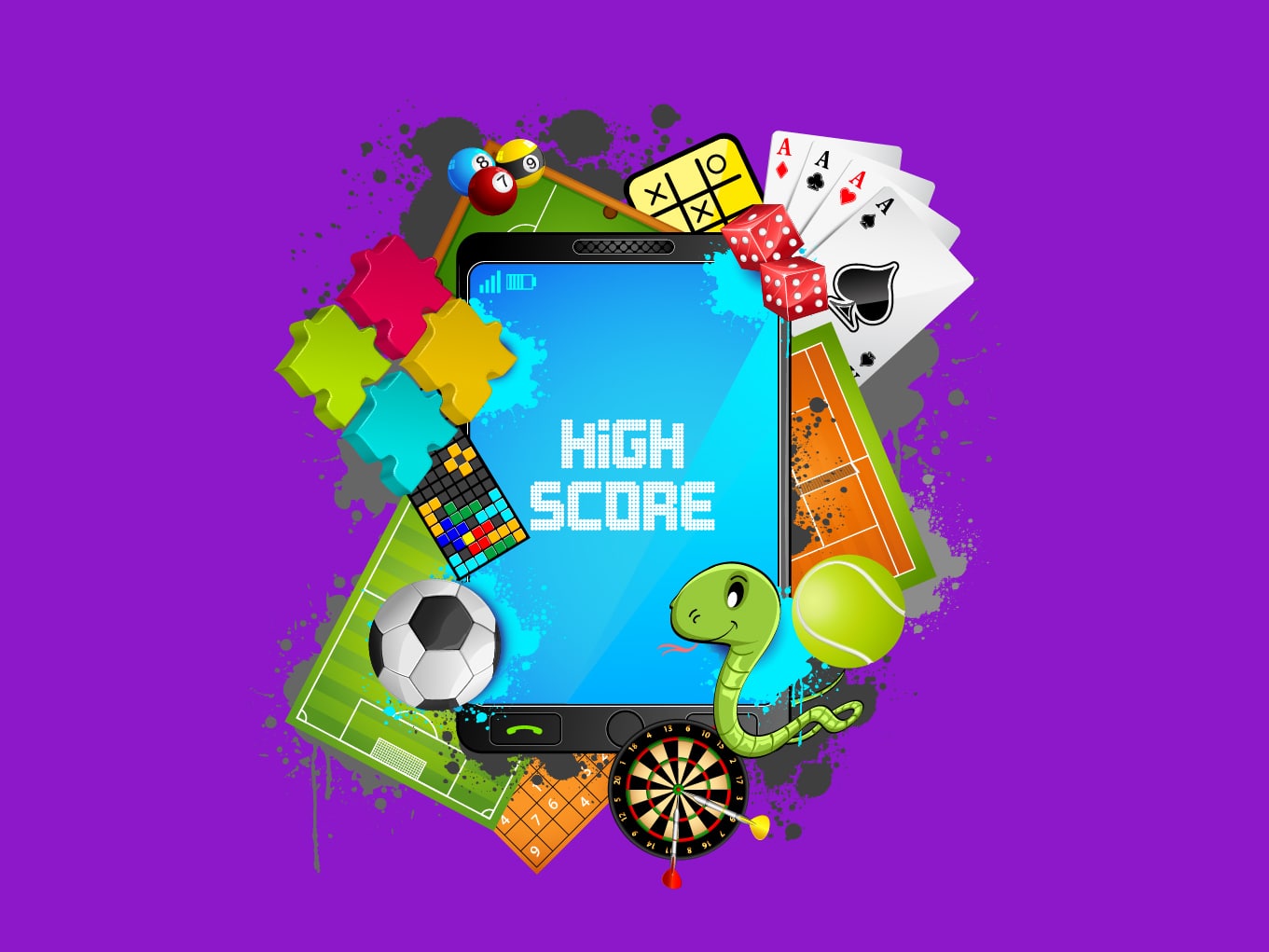 As per Inc42 Plus analysis, India stands in the sixth position in the global mobile gaming market with a market size of $1.2 Bn in 2020

Ludo King, developed by Mumbai startup Gametion Technologies, was the most downloaded game in India in September 2020

Mobile gaming in India has come a long way from the time when Snake was the game of choice in the late 1990s and early 2000s, to the rise of casual games such as Candy Crush Saga, Angry Bird, Pokemon Go, followed by the entry of more ‘serious’ games such as PUBG Mobile and Fortnite, with the likes of Ludo King currently ruling the roost

While India’s mobile gaming market has mostly been about new games coming to India in the past, given the changes in the market in the recent months, the big hope of mobile gaming rests on Indian startups.

Evolution Of Mobile Gaming In India

One of the first games to take India by storm was Snake, which was preloaded on Nokia handsets in the late 1990s. Such was the popularity of the game, that it also underwent multiple revamps in the mid-2000s to update it for modern times. But while Snake was one of the first mobile gaming sensations in India, PC and console games had hit the Indian market well before that.

From the mid-1990s, console and PC gaming companies started investing in India and this helped create a market for mobile gaming. But it was only after the launch of the Apple App Store in 2008, that the mobile gaming market transformed into a juggernaut. Following this, the launch of the Android Market (now called Google Play Store), also in 2008, mobile gaming became more open and democratised. Developers could tap into the growing horsepower of smartphones to create more immersive and visually impressive games.

With the entry of App Store and Google Play Store, game makers had a massive audience to target. From 2008 onwards, the story of gaming in India has been about mobile gaming.

With microtransactions and digital payments coming to the fore, game makers also had revenue streams other than offering paid games — such as freemium games or in-game purchases for points and upgrades. This set off a new chapter in the history of mobile gaming and brings us to the past two years when the likes of PUBG Mobile, Free Fire, Fortnite and others brought attention to the action genre in gaming.

And this is also when Indian gaming startups — particularly those offering fantasy sports or games-of-skill such as poker or rummy — took off. With Indian being the second-largest smartphone market in the world, it’s no surprise that mobile gaming is a mainstay in the Indian market.

This, despite the fact that India banned over 200 apps and games of Chinese origin in three phases between June and September, with the third phase targeting games such as PUBG Mobile, Clash Of Kings, Ride Out Heroes NetEase Games, Soul Hunters, Rules of Survival among others.

The Hottest Mobile Games In India

While board games have been traditionally popular in India, even in the mobile gaming space, Indians have shown a penchant for digital versions of their childhood favourites. Developed by Mumbai-based Gametion Technologies, Ludo King is currently the most downloaded mobile game in India with 10.3 Mn downloads in September 2020.

Ludo, a modern revival of the 6th-century Pachisi game, has been a sensational category in the Indian market, with Ludo King competing with several other games in the same genre.

Besides Ludo King, online multiplayer strategy game Among Us —  published by InnerSloth — was the second most downloaded game in India in September 2020, garnering around 9.5 Mn downloads. With PUBG Mobile, out of the picture, alternatives to the popular battle royale title have climbed the charts. Garena Free Fire, which is a like-for-like replacement for PUBG Mobile, secured the third position with 9.4 Mn downloads, while Switzerland-based game Carrom Pool came in at the fourth position, followed by Israel’s Bubble Shooter. 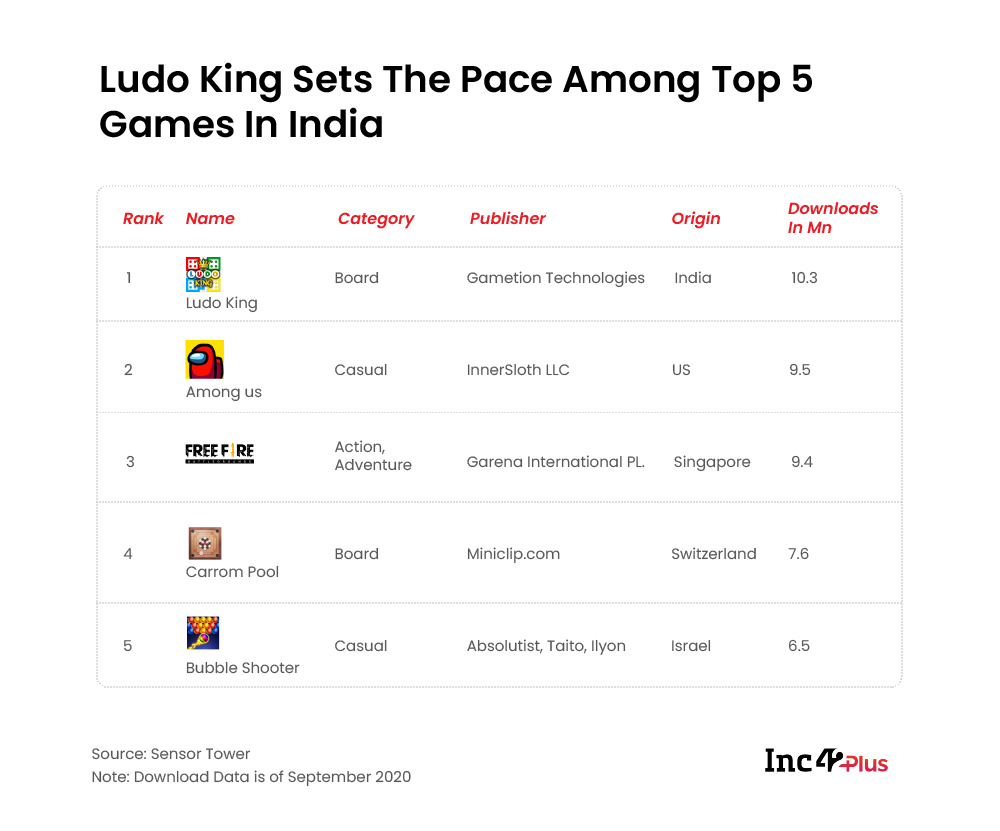 As per Inc42 Plus analysis, India stands in the sixth position in the global mobile gaming market with market size of $1.2 Bn in 2020. China is in the leading position followed by the US, Japan, South Korea and the UK.

Despite India being the second-largest smartphone market, it had a minuscule smartphone penetration of 36.7% in 2019. It has huge room for growth given that the market is so weakly penetrated and the improving market conditions for gaming companies with local investments also driving up adoption. 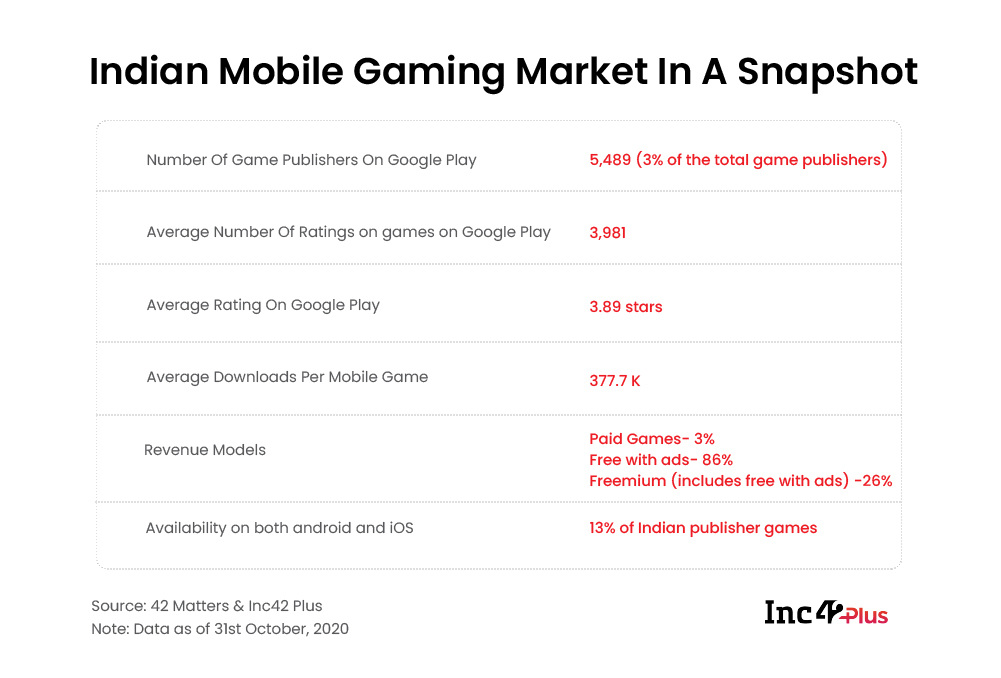 With the second-largest smartphone user base, rising internet penetration due to cheap data rates, the Indian gaming industry is expected to cross $1.6 Bn by 2025. This growth is expected to be driven by the popular games created by several homegrown startups such as Gametion Technologies, Dream 11, Junglee Games, 99Games, WinZO, MPL, Nazara Technologies, HalaPlay and others

Mumbai-based Dream 11, launched in 2008, has witnessed an amazing rise from 3 Lakh users in FY15 to more than 8 Cr users in FY20. With the rise in popularity of fantasy gaming in the country, the startup became the first gaming unicorn in India in 2019.

Ludo King witnessed MAU growth of nearly 47% between April and May, while DAU growth was 30% in May. The company said it upgraded its servers to support a 25X surge in user capacity in these months.

A skill gaming startup, Junglee Games with over 25 million users across 7 countries entertaining them through their notable games, Junglee Rummy, Eatme.io, Junglee Teen Patti, and Howzat. With YOY growth of 80-100% and high proﬁtability, Junglee targeted $600 million in gross transaction volumes in FY19-20 and scale to 50 million users.

With the rise in the esports audience, reaching 17 Mn in 2020, and growth of 123.3% in the prize money pool during 2016-2018, esports has attracted several gaming enthusiasts as well as investors.

A Delhi-based esports platform, WinZO, grew 10X in the last 12 months, clocking 1 billion microtransactions in a month. The company targets to add 100 million registered users to the platform in the coming 12 months by reaching deeper parts of Bharat.

Another major esports platform, MPL (Mobile Premier League) claims to have grown 4x over the past six months. The startup said its gross merchandise value (GMV) has reached  $1Bn from the $350 Mn in March 2020. It currently has over 60 Mn users in India coming from over 5200 Indian cities and towns across the country. This year the startup is sponsoring two IPL teams and reality show — Big Boss 2020.

Launched way back in 2000, Nazara Technologies has seen the Indian mobile gaming market go through every phase in the past two decades. The company, which develops and operates fantasy games, games of skills and casual games, is now preparing for an IPO and would become India’s first publicly-listed gaming company.

While growth in terms of users will continue to come for gaming startups in the next few years as the market grows and as India’s media and entertainment landscape brings in more digital experiences, the biggest question for startups is the monetisation and revenue generation.

India has the right demographics for mobile gaming growth and a fast-growing base of young consumers, But monetising this user base has always been a challenge for most consumer-facing startups and this holds true for mobile gaming as well. For robust revenue from the Indian market, mobile gaming companies have to tackle the price-sensitive mindset of Indian consumers and convey a sense of value in in-game purchases.

Find out more about how India’s mobile gaming startups are bridging the revenue gap and the areas they are focussing on in the full Inc42 Plus report — Mobile Gaming In India: Market Opportunity Report, 2020.

Pre Register To Get The Report Below