The growth in esports prize money pool by 123.3% during 2016-2018 has attracted gaming enthusiasts to become professionals

Will esports startups in India be able to sustain the growth in engagement and revenue seen during the Covid-19 lockdown in the quarters to come?

As the internet spread to nearly every corner of India, the widening of the top of the funnel for all consumer internet services and digital products has served to convert the middle and bottom layers into revenue-generating individuals and businesses. And the ‘attention economy’ is one segment that epitomises this maturity better than most.

While this transformation was happening at a relatively glacial pace till late 2019, the behavioural changes set in by the Covid-19 pandemic has acted as an accelerant. The paradigm shift in the way Indians consume content and the way people socialise online has acted as a catalyst for many attention economy sectors including online gaming.

According to a report by BARC & Nielsen, the number of smartphone game users per week grew from 60% in pre-Covid times to 68% during the lockdown. Similarly, the time spent on mobile games per user per week went from 151 minutes before the lockdown to 218 minutes during the lockdown. Esports has a huge potential in the Indian market, given that India has the right distribution of consumers and players, thanks to the high youth population.

The esports segment within online gaming has witnessed significant growth in India in the past few years thanks to proliferation of high-end smartphones at affordable prices, as well as the rise of mobile games such as PUBG Mobile, Free Fire, Clash of Legends, Call of Duty Mobile among bigger PC and console games such as DOTA2, CS:GO, Rocket League, Fortnite PUBG (different from mobile) and others.

Coupled with deeper penetration for high-speed 4G internet and a rise in the number of online gamers, the esports market has all the ingredients for growth. This has also brought in increased attention from investors in the pre-Covid phase, which is likely to continue in the next year. The aggregate revenue of esports startups and companies in India reached $68 Mn in FY2020, as per Inc42 Plus analysis of 36 companies including Jetsynthesys, Nazara Technologies, Usports, Gamerji among others. Our latest report “Esports In India: Market Landscape Report, 2020″ delves into this emerging landscape and finds out what is driving the revenue in this sector, which is projected to grow by CAGR 36% in the next 3 years.

The rise in viewership has made a major contribution to esports revenue so far, but the participation from Indian players is also rising rapidly thanks to the higher income potential, as we will see. According to a Frost & Sullivan Report 2018, Indian esports audience is developing with only 2 Mn enthusiasts and an additional 2 Mn occasional viewers in 2019, which is expected to grow by over 5X by next year.

Looking at the market opportunity, even unicorns such as Paytm and Hike have doubled down on games. While Paytm launched Paytm First Games as a multi-game platform, Hike-backed WinZO has also been growing rapidly and has raised plenty of funding in the recent months.

“India continues to be one of the most promising markets for esports in the world in terms of size and potential. Mobile gaming penetration has surged in the past few years fuelled by affordable handsets and lower data costs. Additionally, further penetration of video streaming platforms like Youtube and video-based social networks like Tik Tok has further helped propel the mobile esports friendly games into mainstream,” Paytm First Games COO Sudhanshu Gupta told Inc42 in May this year.

As indicated earlier, esports has seen rising participation from Indian players as the prize money across esports tournaments has been on an upward trajectory since 2016. This has attracted several players and made esports a viable career option in India.

Esports audience in India has grown from 6 Mn in 2017 to 17 Mn in 2020. According to esports content platform AFK Gaming, the total esports prize money grew from INR 77 Lakhs in 2016 to INR 384 Lakhs in 2018, growing at a CAGR of 123.3% during the period 2016-18. The rising prize money has been fuelled by marquee esports tournaments for games such as Clash of Clans, PUBG (now banned) and other multiplayer action or strategy games. 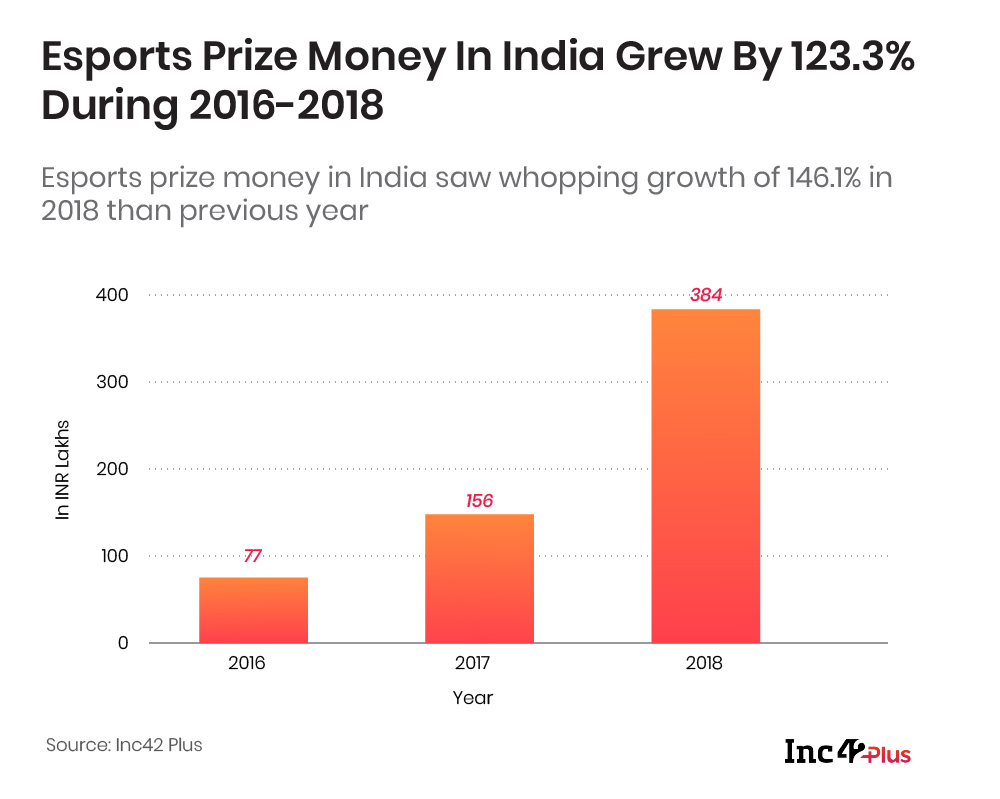 The entry of PUBG Mobile in India was a game-changing moment — literally and figuratively. As per Sensor Tower data for July 2020, out of PUBG Mobile’s 734 Mn downloads globally, India was the top ranked in terms of downloads, with 175 Mn installs or 24% market share, which is more than the combined market share of second-placed China and US in the third place.

While obviously, not all these installs are for esports competitions, many enthusiasts have graduated to esports thanks to the prize money involved. In 2018, Chinese tech giants OPPO and Tencent jointly sponsored an INR 50 Lakh tournament.

Of course, much of this growth has been in recent years, whereas esports is already a multi-billion dollar business in the US and China. So relatively speaking, India has a long way to go in terms of revenue and income for players, despite outpacing China and the US in terms of downloads. To put in perspective, In 2019, esports tournaments in the US offered over $40 Mn in prize money, whereas one of India’s largest tournaments — the PUBG Mobile India Series 2020 — offered INR 50 Lakh as total prize money.

Aside from the aforementioned internet penetration and demographic fit, the esports and online gaming market in India has been driven by the proliferation of high-performance smartphones and increasing presence of gaming-related

Smartphone Penetration: The number of smartphone users in India grew at a CAGR of 15% during 2015-2020. The growing demand for digital services for information, entertainment and communication through apps such as Facebook, WhatsApp and YouTube have paved way for more matured segments such as esports in India. Also with the ease of accessibility in smartphones, games such as PUBG Mobile took the Indian market by storm with an estimated 33M monthly active users.

Emergence Of Esports Cafe: Esports cafes are not only a way for people to play games without owning the requisite hardware, but this is where the competitive mentality is built through amateur tournaments. It also allows gamers to engage and create communities. India is home to an estimated 350-plus such esports cafes with PC hardware giant NVIDIA announcing plans to expand its gaming footprint in India by adding 100 more cafes. Nemesis Gaming, League of Extraordinary Gamers (LXG) and Circle Gaming are few major esports cafe startups in India.

Rise In Startup Investments: As demand for competitive gaming rises in India, the esports and gaming segment is attracting adequate investor interest.. Between 2014 and H1 2020, the total venture capital funding in Indian gaming startups was $448 Mn, according to Inc42 Plus. Among the gaming startups, the top-funded startups are Dream11 with $100 Mn in total funding, followed by Smaaash Entertainment with $82.6 Mn in funding and Nazara Technologies with $79 Mn.

As per data from Tracxn, esports accounted for four out of five deals in the gaming sector in 2019, including deals for WinZO Games, Mobile Premier League, Sostronk and Gaming Monk.

With the lockdown across the globe, people not only had more time at hand for chores, but also to delve into their hobbies and make careers out of their passions. Esports, like many other niche categories, benefitted from this higher engagement time and the demand for discovery of new avenues of entertainment.

Gaming startups such as Nazara Technologies, Gaming Monk, WinZO, Gamerji told Inc42 that they witnessed growth during the lockdown period. Ahmedabad-based Gamerji, which has conducted more than 6000 esports tournaments to date, saw a 2.5X surge in traffic post the lockdown, with 150K new users a month.

“There is higher player engagement in most platforms and this could potentially boost the esports economy, as most sponsors who would usually partner up with cricket or other major sporting events have all been postponed, this leaves esports as one of the few sporting events that sponsors can partner with to promote their product,” said Yash Pariani, director, Indian Gaming League, a Mumbai-based startup that has seen a 90-100% increase in customer engagement and daily sign-ups within esports since the lockdown.

While the lockdown growth has shown that Indian gamers and audiences have the propensity to engage and spend, there’s a long way to go for the Indian market. Firstly, gaming startups and esports companies have the challenge of sustaining this growth and making substantial rises in revenue earned from players and viewers.

The most reasonable expectation is that esports gaming will only grow in value and revenue through sustained developments in technology, content, and most importantly in adding more genres besides the popular battle royale format adopted by PUBG, Fortnite etc, and multiplayer online battle arena games such as League of Legends, Smite, Heroes of the Storm and Dota 2 . The industry needs diversification of genres in the future with games in role-playing games, action arena games, adventure games, simulation, strategy and sports genres expected to take centre-stage too.

Get a sneak peek into the huge untapped potential of the competitive gaming and esports market in India in the latest release from Inc42 Plus — Esports In India: Market Landscape Report, 2020.