Zomato Goes Public Today – Everything You Need To Know

Zomato Goes Public Today – Everything You Need To Know Can Zomato’s IPO, which kicks off today, usher in the age of successful public listings among startups?

It’s not often in our lives that we get to witness history as it is being made. The Zomato IPO, which kicks off today, marks a significant and pivotal moment in Indian tech startup history. While EaseMyTrip and Nazara have shown that IPOs are indeed possible in the Indian tech industry, Zomato is easily the biggest brand name from the startup world to be going to the public markets — along with other big league startups like Paytm.

We have seen venture capital funding rise and fall and rise again, but the IPO is a monumental step and one that defines the legacy of a company. It also represents the crossing of the line — from a stealthy startup to a public entity. Can Zomato’s IPO usher in the age of successful public listings among startups?

Zomato’s IPO will open for subscription today with the issue closing for subscription on Friday, July 16. The IPO is opening at a price band of INR 72 – INR 76 per share and there’s tremendous excitement in the market over the potential of some of these tech stocks from India, particularly given the post-pandemic market conditions that favour digital platforms.

Founded in 2008 and having raised over $2.1 Bn across several funding rounds, Zomato has now become a household brand in India’s major cities with a presence across food delivery, cloud kitchen access, restaurant supply chain as well as grocery and nutraceuticals.

Starting with two founders — Deepinder Goyal and Pankaj Chaddah — Zomato today has a solid base with three more cofounders added to its management team in the past couple of years. After the exit of Chaddah in 2018, Goyal continued to lead as CEO, but since 2019, Gaurav Gupta, Mohit Gupta and Akriti Chopra have been elevated to the position of cofounder from senior management roles. 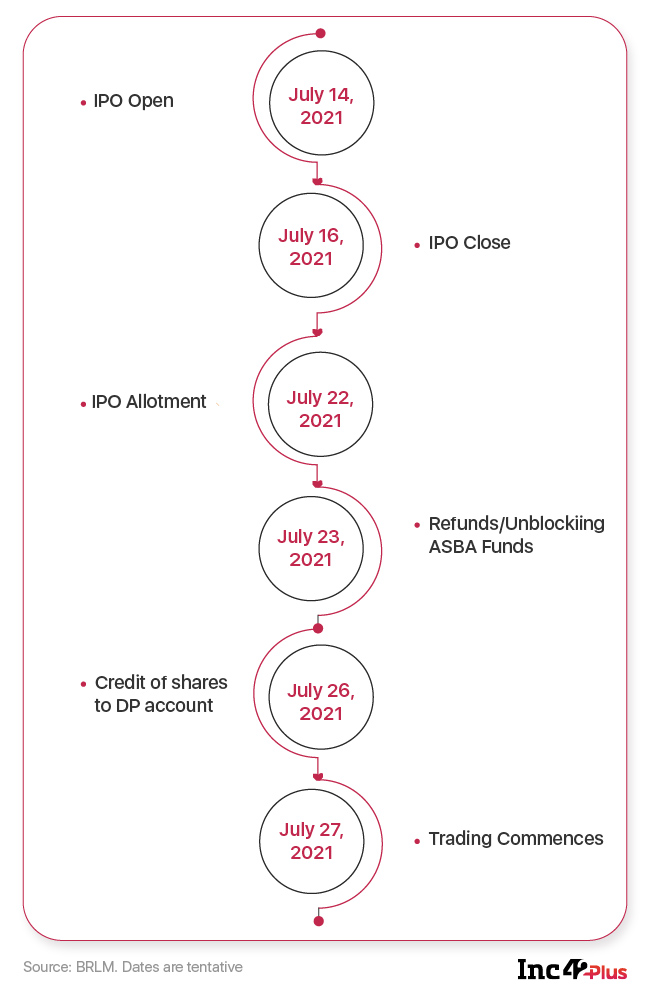 Zomato says its post-money valuation at the upper band is INR 64,365 Cr, which has raised some eyebrows among investors. However, whether the high valuation sought by Zomato will be fulfilled by institutional and retail investors is not clear. Not everyone is convinced that Zomato’s financials match up to the big valuation being chased by the company. By the end of today, we will know whether Zomato’s target was conservative or aggressive. And this could impact the subscriptions on the next two days.

Meanwhile, Zomato’s stock has been seeing a lot of interest in the grey market, trading at a 15%-20% premium. The Evolution Of Zomato

The Zomato IPO may not only change how future investors perceive the foodtech market but the entire restaurant industry as well. Some of the notable IPOs in the restaurant industry including Barbeque Nation, and Burger King that were announced during the pandemic have not seen much demand from retail investors yet.

Both company’s share prices have only declined consistently, although they saw some upward movement earlier this year. Zomato, which is part of a duopoly in India’s foodtech with Swiggy, has seen some stern criticism in the past from restaurant groups over deep discounting and its monopoly over the customer data, which will be closely watched by both restaurant and tech industry investors once the stock hits the market.

Conceptualised as a restaurant discovery and rating platform, the basic idea behind Zomato in the early days was to help hungry Indians discover food in their locality (or the same city) along with an option to leave online reviews showcasing their dining experience. While now it has become a full-fledged delivery platform, it is not just that as it also caters to the B2B vertical.

Food delivery changes Zomato’s fortunes and its identity, but Goyal’s goal was to capture both the demand and supply side of the restaurant market. Along the way, it has acquired over a dozen companies and startups around the world, including major names such as Uber Eats (India) and Urbanspoon (USA).

Currently, Zomato’s primary revenue source includes ad sales, food delivery, and Zomato Pro subscriptions. For its next leg of growth, Zomato is now doubling down as a direct service provider for restaurants by offering online discovery, table booking, cloud kitchen infrastructure and B2B raw material supply for restaurants via Hyperpure. It has even indicated the desire to enter food-adjacent categories such as grocery — which it eventually shelved — and now nutraceuticals and health supplements.

Zomato’s Growth Amid The Pandemic

Being its core business, food delivery comprises 75% of Zomato’s revenue. While Zomato is present across 23 countries globally, the primary market driven by food delivery is in India. In the remaining markets it mainly offers restaurant directory services. In FY21, Zomato claims to have reached 32.1 Mn average monthly average users (MAU) from India for its food delivery business. Besides this, it claims to have more than 1.4 Mn Zomato Pro subscribers and over 25,000 restaurants on the Pro plan, as of December 31, 2020

How Zomato Tightened Its Ship Before The IPO 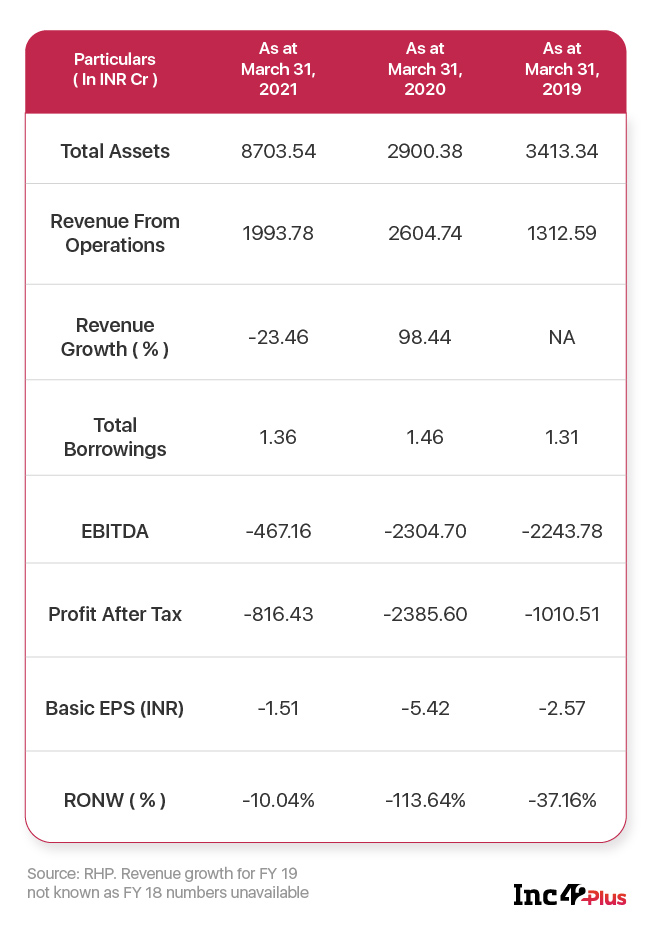 In the past year, despite the initial hiccups of the lockdown, Zomato managed to shore up its unit economics thanks to food delivery being the only way out for consumers looking at non home-cooked food. The change in behaviour turned the tide in Zomato’s favour.

According to Aarin Capital founding partner and former Infosys CFO Mohandas Pai, “Equity markets are all about growth. The rise in capital flow,  the rise in liquidity and the success of many companies, coupled with the relief of coming out of Covid, are creating a wave of optimism, which will help these companies tap into public markets. This will give them access to a large pool of global investors, leading to tremendous liquidity and excellent brand building.”

Where Will The Post-IPO Focus Lie?

The major objectives of the IPO for Zomato would be funding organic and inorganic growth opportunities, and for general business purposes. Beyond directory and food ordering Zomato is also building its focus on providing better raw materials to restaurants to increase consumer trust in the safety of the food.

The company is building its business-to-business (B2B) Hyperpure vertical to enhance the supply chain for raw material to restaurants. The initiative connects farm produce to restaurants directly and the company expects that “Hyperpure” tags on restaurants will improve user engagement with those partners.

Beyond the B2B vertical, the company is also doubling down on B2C online grocery delivery and will launch its grocery offering shortly, pitching itself against the likes of BigBasket. It has recently made a $100 Mn investment in BigBasket rival Grofers but the company said that the investment is independent of its grocery plans.

Zomato has started piloting its nutraceutical offering and will watch how it plays out over the next few quarters. The company said it was launched on an experimental basis, across a limited number of cities, and will be part of their larger offering for healthy food.

As of March 31, 2021, Zomato was present in 525 cities in India, with 389,932 active restaurant listings. With more than 161,637 active delivery partners as of December, 2020, Zomato has a strong food delivery network, which is also becoming unit economics positive.

The company’s order fulfilment rate stood at a massive 94.9% in FY2020, with the median delivery time less than 30 minutes. Besides this, over the years, Zomato has developed a strong brand identity in small and large cities through its various marketing campaigns, sponsorships as well as the Zomato brand name on food packaging and delivery partner uniforms.

While in the first wave of Covid last year, Zomato suffered losses as many restaurants had not shifted to delivery-only operations, the company was able to recover better during the second Covid wave in 2021. Zomato launched a massive ad campaign featuring founder Deepinder Goyal as well as cofounder Gaurav Gupta to convince customers about the safety aspects in food delivery, which seems to have paid off.

The People Behind Zomato

Given its wide range of services and business verticals, Zomato has had to rely on a number of key leaders and managers over the years, many of whom have been elevated to the position of cofounders.

Last month, Zomato elevated CFO Chopra to the position of cofounder. Chopra, who is the wife of Grofers cofounder Albinder Dhindsa, had originally joined Zomato back in 2011 as its senior manager in the finance and operations team. She was promoted to the post of VP in September 2012, after which she was appointed as the CFO in April 2019.

CEO Goyal currently has about 5.51% stake in Zomato, approximately worth INR 290 Mn. He has also been allocated ESOPs, which put the worth of Goyal’s total stake in Zomato at around $600 Mn at its current valuation.

While Zomato is the first out of the block, other companies such as MobiKwik, Paytm, Nykaa, PolicyBazaar and Ixigo are also eyeing public listing by this year or early next year. The latest to file its draft red herring prospectus is MobiKwik, which is targeting an INR 1,900 Cr IPO, significantly smaller than Zomato or Paytm, but nonetheless another noteworthy milestone for the Indian startup ecosystem.

“The IPOs signal a coming of age and a maturity for the Indian startup ecosystem. This will represent a new phase for startups,” Siddarth Pai, founding partner, 3one4 Capital, had told Inc42 recently.

The success or failure of Zomato’s IPO will determine how well some of these other startups  do when they list, and it will represent one of the most pivotal moments for the Indian tech industry. Can startups take the leap to the next phase of evolution and entrepreneurship?