Org Chart: The People With Power At IPO-Bound Zomato

Org Chart: The People With Power At IPO-Bound Zomato 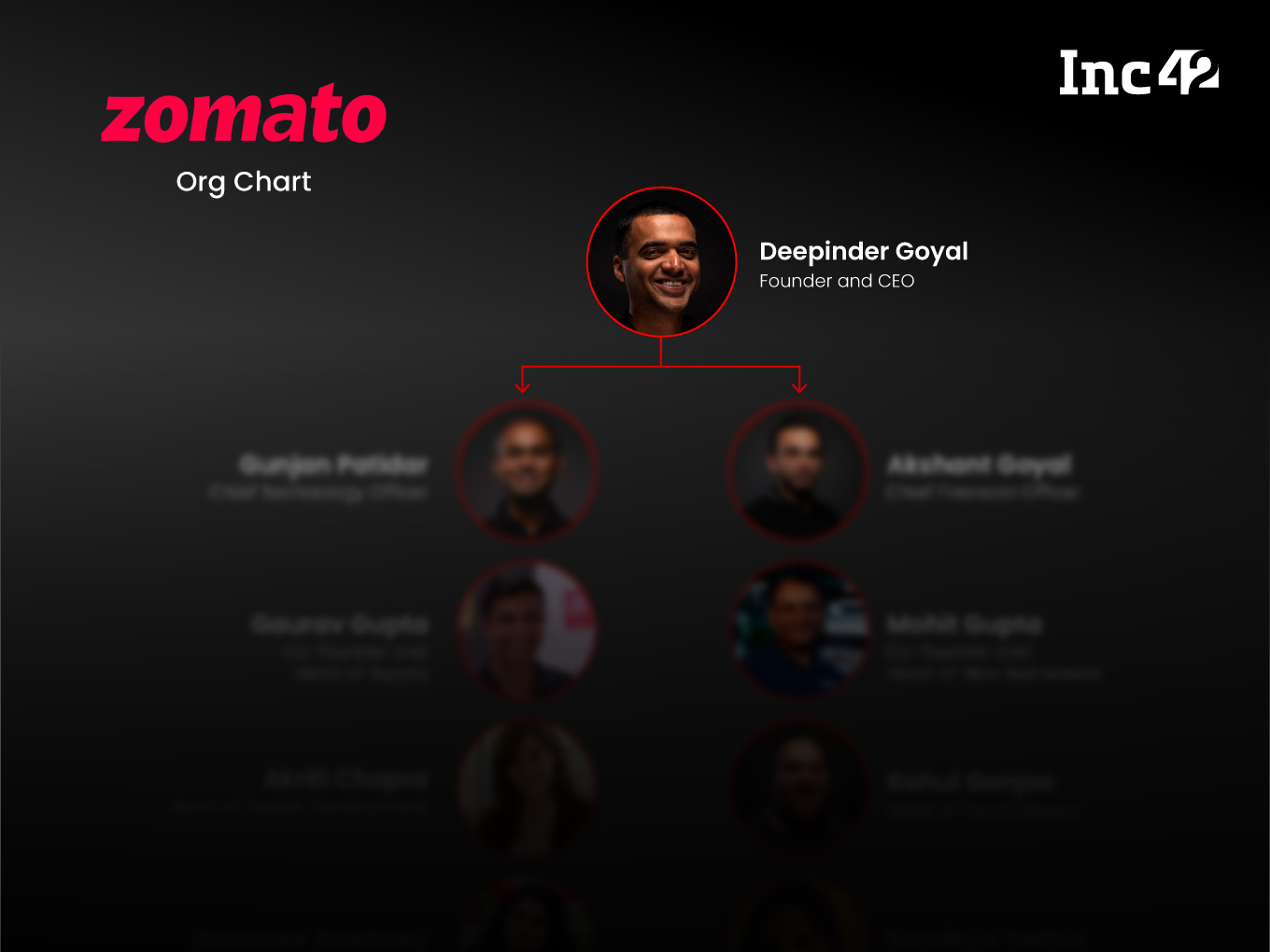 Zomato filed its draft prospectus with SEBI last month, for $1.1 Bn IPO scheduled for this year

Food aggregator unicorn Zomato’s $1.1 Bn or INR 8,250 Cr initial public offering (IPO) scheduled for this year is one of the much-awaited events in the startup ecosystem. The company had filed its draft red herring prospectus (DRHP) with the market regulator Securities and Exchange Board of India (SEBI) last month. Zomato’s largest stakeholder InfoEdge, which holds about 18.55% shareholdings in the food aggregator, will be offloading shares worth INR 750 Cr (approximately $100 Mn) in this process.

Zomato had been prepping up for its IPO since last year, after the company closed its $660 Mn (about INR 4,822 Cr) Series J round last year in December. The company soon buckled up to raise additional funding in order to create a war chest of $1 Bn to go public as well as fend off competition. Notably, Zomato has raised about $910 Mn in the last 12 months, of which $250 Mn (over INR 1,800 Cr) was invested in the first quarter of 2021 at a valuation of $5.4 Bn. It is now looking to raise another INR 1,500 Cr ($200 Mn) as a pre-IPO exercise, it revealed in its DRHP filing.

Not only this, the company had also appointed five independent board members last month in order to maintain cognitive diversity in the company. Prior to that, the company had a largely investor-run board consisting of CEO Deepinder Goyal, Alipay’s Douglas Feagin and Info Edge’s Sanjeev Bikhchandani.

The latest addition to Zomato’s board included  Sutapa Banerjee, who is also on boards of other companies like Godrej Properties, JSW Cement and Axis Capital among others; former Olympian Aparna Popat; Zalora Group CEO Gunjan Tilak Raj Soni; Airveda’s founder Namita Gupta; and TARI founder Kaushik Dutta. Each of these independent directors have been appointed at a remuneration of INR 24 Lakh per annum, effective from April 2021 (FY2022), with a sitting fee of INR 1 Lakh per meeting.

In its DRHP filing, the company has listed the designations of its top management and their remuneration.

Here Is How The Top Management And Board Of Zomato Looks Like:

Deepinder Goyal founded food aggregator business Zomato in 2008, along with Pankaj Chaddah. The company has grown to serve in over 10,000+ cities across the globe in a span of 13 years. Having raised over $2 Bn across several funding rounds, Zomato has now become a household brand in India’s bustling cities.

As Zomato converted itself to a public entity in April 2021 as a prep up for its IPO, the company also appointed founder and CEO Deepinder Goyal as the managing director and CEO of the company for the next five years until March 23, 2026, with a basic salary remuneration of INR 3.5 Cr. However, Goyal has voluntarily waived his remuneration for a period of 36 months from April 1, 2021 onwards.

Goyal currently has about 5.51% stake in Zomato, approximately worth INR 290 Mn. He has also been allocated ESOPs, which increase Goyal’s total share at Zomato worth $600 Mn at current valuation. Incase Goyal’s appointment is terminated before March 2026, he will be entitled to all options as per the ESOP agreement and will also receive a cash compensation of INR 1.75 Cr.

Hailing from a small town named Khargone in Madhya Pradesh, Gunjan Patidar started off his career as an intern at Zomato back in 2008 and worked his way to becoming the chief technical officer (CTO) of the company. He had officially started working with the company on January 1o, 2010. Given his contribution to building Zomato, Patidar was elevated to the cofounder’s position. He holds a bachelor’s degree of technology in textile engineering from the Indian Institute of Technology, Delhi.

Gaurav Gupta, cofounder and head of supply at Zomato

IIT Delhi alumnus Gaurav Gupta started his sprint at Zomato on June 22, 2015, and was elevated to the position of cofounder due to his success in Zomato Gold and Hyperpure. He started off as business head of table reservations at Zomato and moved on to the role of global advertising sales head in 2017. He served as the COO of Zomato, between January 2018 to November 2020. He moved to the position of head of supply last year. Prior to this, Gupta had been associated with A.T. Kearney Limited for over a decade.

Akshant Goyal, former vice president of Kotak Investment Banking, was appointed as the chief financial officer (CFO) of Zomato in 2020, replacing incumbent Akriti Chopra who had moved to a new role within the company. He joined Zomato as the head of corporate development in 2017. Goyal had previously founded and built a fintech startup as a cofounder and CTO.

Mohit Gupta, cofounder and head of new businesses at Zomato

Foodtech major Zomato had elevated Mohit Gupta, head of new businesses, as cofounder of the Gurugram-based company. Gupta, who was previously with online travel aggregator MakeMyTrip as chief operating officer, had joined Zomato in 2018. Prior to joining MakeMyTrip, Gupta worked with Zovi and PepsiCo International. Gupta, a post-graduate from Indian Institute of Management, Calcutta holds an engineering degree from Sardar Patel University, Gujarat.

BITS Pilani alumnus Rahul Ganjoo, former mentor of change at Atal Innovation Mission, started his journey with Zomato in 2017 as the vice president of product management. He was elevated to the position of CEO of food delivery vertical in October 2020. Prior to that, he has been associated with ecommerce giant SnapDeal, Twitter, Symantec and others.

Akriti Chopra is one of the oldest members at Zomato, who had started her journey as the senior manager of finance and operation in 2011. She worked as the vice president of finance and operation in the food aggregator business for almost seven years, before taking up the role of chief finance officer (CFO) in 2019. Last year, she moved on to the role of head of people development. She attended a bachelor’s degree course in commerce from Lady Shri Ram College, Delhi University and is an associate member of the Institute of Chartered Accountants of India (ICAI). Prior to joining Zomato, she was associated with PwC.

Over the past eight years at Zomato, Surobhi Das has held several key roles in the food aggregator startup. She has worked as the chief of staff to founder/CEO, COO, vice president of strategy and operations, global head of content and head of customer experience. She has also been associated with Bain & Company as senior associate consultant between 2009 to 2011. She holds a bachelor’s degree of architecture from the School of Planning and Architecture, New Delhi and a post graduate diploma in management from the Indian Institute of Management, Ahmedabad.

Daminee Sawhney has been associated with Zomato for the past decade as the head of human resources. She started working for the company on February 1, 2011 to November 11, 2011, and later re-joined the company a year later on December 24, 2012. She attended a bachelor’s degree course in business administration from the Amity University and holds a master’s degree of science in international employment relations and human resource management from the London School of Economics and Political Science, United Kingdom. Prior to joining Zomato, she worked with Radisson MBD Hotel.

Sandhya Sethia is currently the company secretary and compliance officer at Zomato, who has been associated with the company since January 10, 2019. She holds a bachelor’s degree in commerce (honours) from University of Delhi and is an associate member of the Institute of Company Secretaries of India. Prior to joining Zomato, she worked for over six years in different roles with JHS Svendgaard Laboratories Limited, Mideast Integrated Steels Limited and Affle India Private Limited.

Damini Bhalla is the newest addition to Zomato’s key management, and had joined the company on March 26, 2021 as the general counsel. In the financial year 2021 (till April 2021), she had received a gross remuneration of INR 2.8 Lakh. She graduated with a B.A. B.L. (Honours) degree from NALSAR University of Law in 2005, Hyderabad and is a qualified, non-practising solicitor of England and Wales. Prior to joining Zomato, she has worked in two law firms, including one law firm abroad. She was a partner at L&L Partners, New Delhi (formerly known as Luthra & Luthra Law Offices) in her last stint.