Will US Force India’s Hand On Huawei Ban During Trump Visit?

Will US Force India’s Hand On Huawei Ban During Trump Visit?

Ahead of Donald Trump’s visit to India, US alleges Huawei has installed backdoors in all telecom equipment

With India stuck in global negotiations over 5G and digital tax, will Trump use a ban on Huawei as a bargaining chip? 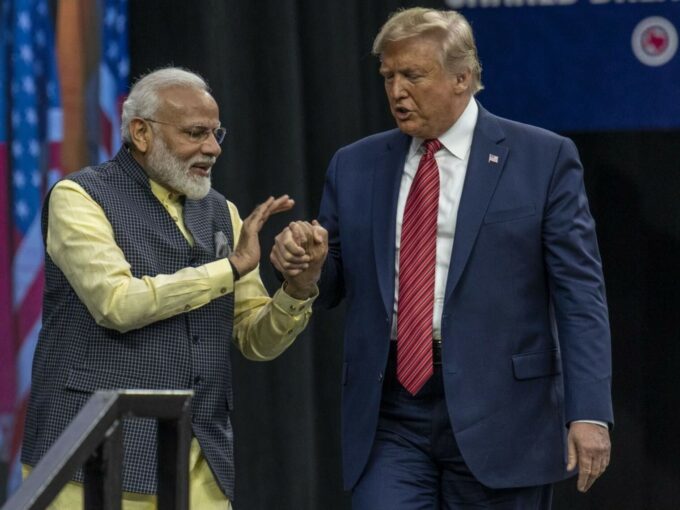 Things are not looking great for China at the moment — the US and President Donald Trump’s administration refuses to budge from its trade tariff hike, which has impacted major companies such as Huawei, Apple, Tesla and others, and now the Covid-19 or coronavirus threat has taken centre-stage. Amid all this, the US has thrown another bucket of allegations on Chinese electronics and networking giant Huawei to go with its ban in the US, just as Donald Trump prepares to visit India.

That the US administration is against Huawei is clear from the ban on Huawei in the consumer market as well as in software — Huawei has had to break away from the Google-controlled Android and developed its own smartphone operating system  in 2019 to sustain its smartphone business.

Cut to February 2020, US is saying that Huawei has used its global telecom networking contracts to install backdoors and spy on foreigners on behalf of the Chinese government.

If that tactic sounds familiar to anyone, that’s because it’s straight out the US playbook. When Edward Snowden released his cache of documents pertaining to the spying and surveillance infrastructure controlled by the National Security Agency, USA’s national-level intelligence agency, it mentioned Upstream and PRISM.

Most of the focus was on PRISM because it pertained the involvement of most major tech companies, but Upstream was clearly the more nefarious surveillance method since it didn’t discriminate in its surveillance.Upstream included streams of data collected from undersea cable base stations among other nodes of networking infrastructure. India copied it with the Central Monitoring System, but the USA is pointing fingers at Huawei for allegedly doing the same, and also says it has evidence to prove it.

Huawei hit back with a long response pointing to the surveillance history of the US.

“As evidenced by the Snowden leaks, the United States has been covertly accessing telecom networks worldwide, spying on other countries for quite some time,” Huawei said in its statement.

It also referenced a recent Washington Post report on how the CIA bought a company called Crypto AG to spy on communications, which incidentally also spied on Indian telecom networks.

Trump In India: Will Huawei Be On The Agenda?

So we catch up to Donald Trump’s visit. As can be expected, It’s going to be big and bombastic. We all know the US President is going to inaugurate the world’s largest cricket stadium in Ahmedabad and will perhaps appreciate the hugeness of the thing as he has been known to do. We might even see a 3 am tweet in Hindi.

But behind closed doors, Trump is likely to be pushing hard for India to back off its friendly stance on Huawei. While the US has been managed to sway many allies including Australia towards its corner in the fight against Huawei, things have been pretty good for Huawei in India. There’s been no ban on Huawei phones or telecom participation in India. Huawei is working with major telcos on 5G trials, even though the 5G launch is a fair distance away. However, a report earlier this year suggested that the government may review its position in allowing Huawei to participate in 5G experiments.

India is the world’s fastest-growing smartphone market — it will likely be the world’s largest 5G market in about a decade if the pace of mass 4G adoption (estimated to be over 600 Mn 4G subscribers in four years) is any indication. Huawei would not want to miss out on this market through a ban, after it has been already banned in many other countries.

The US state department has discussed Huawei security risks with India in the past and has tried to convince many other governments to also ban Huawei. The US state department’s Morgan Ortagus had said that while 5G networks will play a crucial role in the coming times, the stakes are too high to allow Chinese companies, which are under the control of authoritarian regimes, to provide this technology. Ortagus added, “All countries should adopt national security policies in order to prevent untrusted companies from misusing any part of their future 5G network plans.”

If Donald Trump indeed wants to bait his voter base in the US with more manufacturing and technology growth domestically, a win in India over Huawei would be a big deal. Yes, one cannot forget that Trump would be up for re-election towards the end of this year. A big part of his pitch is US manufacturing and made-in-USA technology. While in terms of major telecom networking players that can compete with Huawei, the US has no real contenders, Qualcomm has expressed interest whereas Ericsson and Nokia are the other big players in this arena.

Will India bite Donald Trump’s bait? Ultimately, it is nothing but a bait as India needs to win a few brownie points to pass some of its own plans stuck on the global negotiation table.

The Indian telecom standards body — Telecommunications Standards Development Society, India (TSDSI) — proposed a radio interface technology (RIT) to the International Telecommunications Union (ITU) as a new modification to the radio signal, which can enhance the signal transmission range of a base station. This suits India’s use-cases for rural connectivity and long-range transmission. Called Low Mobility Large Cell (LMLC), this tech could bring cheaper 5G access to the Indian market.

India wants this technology to be interoperable with global specifications set by the 3rd Generation Partnership Product, which is the basis of all chipsets, smartphones, base stations or modems manufactured. But within the 3GPP, some groups were not happy about TSDSI’s new specification as it would involve revamping existing new 5G infrastructure.

The TSDSI is set to go back to the negotiation table in February after spending over two years doing the rounds and continuing to adapt its requirements. Will India push Trump to use the dominant position of the US in the telecom and 5G market to push through the TSDSI requirements in exchange for a Huawei ban?

Besides the 5G negotiations with the ITU, India is also at loggerheads with the Organisation for Economic Cooperation and Development (OECD) with its 134 member countries, over digital tax.

In the last meeting with the OECD in Paris, no consensus was found which could result in the delays in finalising the new digital tax structure on companies like Google, Netflix, Amazon, Facebook and Uber.

Among the issues raised by India in Paris were broadening the taxable scope of businesses, including the threshold for revenue generated globally as well as within the Indian jurisdiction in the taxable income and promoting the concept of a “virtual company” in case of no permanent establishment for certain tech giants within India.

In simpler words, India wants the whole business taxed and not just a single vertical, which is the case now, even though other verticals may be available in the form of products or services within India. This includes B2B and B2C versions of any product.

According to a Business Standard report, India also wanted residual profits distributed according to the value of users of each country and the demand for the tech product or service in the market.

While the OECD is a global organisation, the US is one of its 20 founding members. And for India, a bigger tax bill from the technology sector could be crucial in boosting its tax revenue and collections.

For the Narendra Modi government, another potential upside to ditching Huawei is the potential to develop an indigenous 5G technology network infrastructure, that can be geared towards India’s specific needs. But it needs investments, policy and technical expertise, which is lacking in the Indian context. Will Modi push Trump to back this project financially?

India has to think of another aspect — as its data and tech economy has grown in the past half a decade so have incidents of cyberattacks, many of which have been known to be state-sponsored.

Of course, telecom infrastructure cannot grow in silos; it needs service providers as partners. In India, Airtel and Vodafone-Idea have partnered with Huawei, ZTE, Ericsson, and Nokia for 5G trials, while Reliance Jio has gone with Samsung. Among the private operators, Jio is best placed to capitalise on 5G due to its relatively better cash flow situation and the fact that Airtel and Vodafone-Idea are staring at a crippling tax bill. On the other hand, state-run Bharat Sanchar Nigam Limited has signed a partnership with Nokia for 5G development.

Some might say that market leader Jio and the public sector company BSNL not siding with Huawei is a big indication of how things might play out for the Chinese telecom giant. Whether that means a ban on Huawei, we will find out in the next few days as Donald Trump becomes the centre of attention in India.