Uber will redirect users to the registration page of Yulu, and offer three free rides

As a part of this partnership, Uber users will now be able to book electric scooters and bicycles 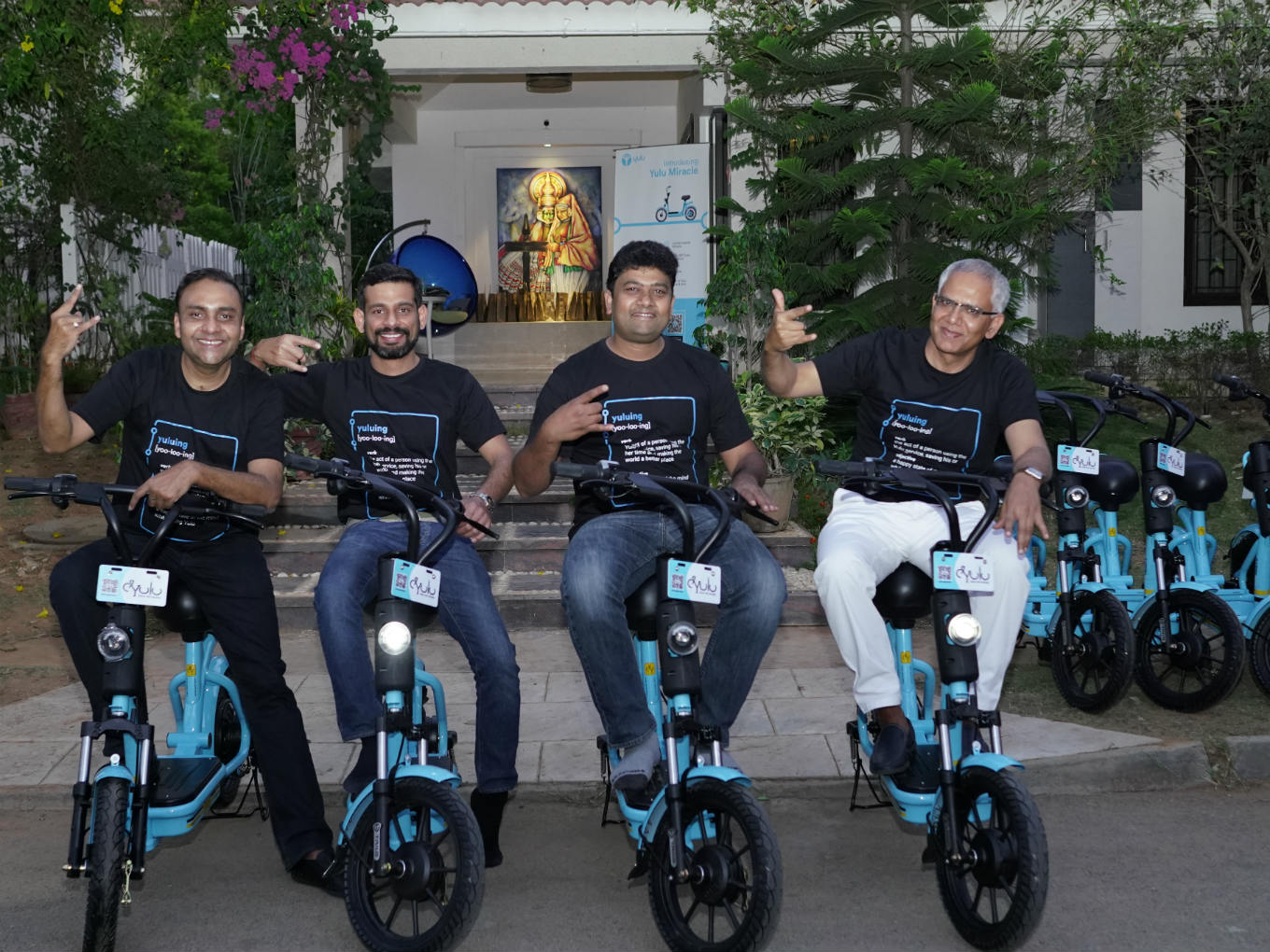 In the war of ecosystems, the fight between Ola and Uber has gone ‘micro’ in India. Cab-hailing giant Uber has partnered with Bengaluru-based dockless bicycle sharing platform Yulu. Last year, Ola had partnered with VOGO to enable micro-mobility rides on its platform. The integration is expected by this year end.

While the Yulu application will not be integrated into Uber, the Uber app will redirect users to the registration page of Yulu. “All that you need to do to hop on to your e-bike or bicycle is tap on the ‘Try Yulu’ option on your Uber app and follow the prompts; few easy steps and you’re done. If you want us to locate you, and for us to locate and unlock your bike for you, don’t forget to give us permission to access your location and camera,” Uber said in a press release.

In typical Uber fashion, the first three rides are free. Uber has already started notifying its Bengaluru riders about the partnership, and in the last few days, numerous users claimed to have received the notification.

Speaking to Inc42, Yulu cofounder and CEO Amit Gupta said, “Yes, we have a deal with Uber. As part of the deal, Uber will redirect its riders, looking for micro-mobility rides, to our Yulu app.”

Yulu was launched in 2017 by InMobi cofounder Amit Gupta, RK Mishra, Hemant Gupta, and Naveen Dachuri. Initially started as a bicycle sharing platform, Yulu is aimed at providing an efficient and green solution for the first mile, last mile, and short distance commute and also reduce traffic congestion. Till date, Yulu has raised $7 Mn in a seed funding round. The startup is backed by investors including Blume Ventures, Binny Bansal, Naveen Tewari and Girish Mathrubootham,

In February, the startup launched its electric scooter Yulu Miracle in Bengaluru. The dockless, low-speed, silent and light two-wheelers with lithium-ion batteries are aimed at helping commuters deal with traffic congestion over short distances.

Unlike VOGO, Yulu ebikes have a maximum speed limit, and hence they don’t require any license or registration — for the riders or the scooters. The top speed is fixed at 25 Kmph.

Ola And Uber: Learning From The Past

Interestingly, in order to capture the micro mobility space, both Ola and Uber had Ola bike taxis and UberMoto respectively. However, while Goa, Haryana and few other states have paved way to allow to operate bike taxis, major states — Karnataka and Maharashtra — which constitute the lion’s share of the micro-mobility market have banned the same.

The problem for Bhavish Aggarwal-led Ola began when it got banned from running cab operations in Karnataka on March 22 and its license had been suspended for a period of six months by the state transport department.

While the legal hurdles continue, both the companies Uber and Ola have now partnered with two-wheeler bike rental and sharing platforms which offer different and legally viable models in the Indian micro-mobility space.

Though this is the first such initiative of Uber in India, the company had already been looking to offer dockless scooter and bike sharing services. Last year, Uber had acquired New York-based bike rental startup Jump for about $100 Mn after two months pilot.

Last year, it was also reported that Uber had also invested in US-based electric scooter rental service provider Lime in its $335 Mn funding round in order to add dockless scooters to its fleet.

This development comes at a time when Indian cab aggregators are increasingly looking to offer electric vehicle services. The central government has also been taking steps to support companies and increase electric vehicle adaptation in the country. Due to growing push towards emobility, the bike sharing sector is also attracting investments.

In December 2018, Uber rival, Ola had also entered into a strategic partnership to invest $100 Mn (INR 712 Cr) in Bengaluru-based scooter sharing app Vogo. Ola had also previously invested in Vogo as part of the company’s Series A funding round which also saw participation from Matrix Partners India and Stellaris Venture Partners.

According to Vogo, as a part of this deal, its services will soon be available for Ola’s more than 150 Mn customer base, directly from the Ola app. However, the ride ahead for VOGO is not going to be any easier. The bike rental platform which currently claims to have 10K bikes has to acquire 90K bikes by the end of the year before getting listed on Ola.

The partnership model of Uber and Yulu is different. In the beginning, Uber which has a single app for its 110 Mn users across the 60 countries it operates, will only provide a link to Yulu which will help its Bengaluru users to go to Yulu app for their micro-mobility needs. Yulu has currently 8,500 bicycles operational across the cities including Bengaluru, Pune, Navi Mumbai and Bhubaneshwar.

“Out of 8,500, Bengaluru has 4.5K bicycles, Navi Mumbai has close to 750 and Bhubaneshwar has 500. We have currently 500 e-scooters in operations at Koramangala and Indira Nagar in Bengaluru,” said Amit Gupta.

Unlike VOGO which operates scooters and e-bikes, Yulu offers bicycles and electric scooters with a maximum speed of 25 km per hour, which requires no licence or helmet for usage. Yulu sources the Miracle scooters, unassembled, from China, but the battery is from India and local partners help assemble these scooters.

Another micro-mobility player Bengaluru-based Bounce (Metro Bikes) had earlier acquired assets from Ofo in India, as the Chinese giant shut down its India operations last year.  Some of the other notable players in dockless bike sharing space are Mobycy, Wicked Ride, StoneHeadBikes, Rentabike and Wheelstreet.

On increasing congestion in micro-mobility space, Gupta earlier said, “This is not the market where the winner takes them all. Our country is big enough and in the case of micro-mobility, there won’t be a case where one player is dominant across the regions. Maybe, Yulu will dominant in a few cities while in other cities, other players could be dominant. There is enough space for all to co-exist and grow.”

With more players, there’s been a lot of investments in this space. While Ola infused $100 Mn in VOGO, in March, Flipkart cofounder Sachin Bansal invested $3 Mn (INR 20.8 Cr) in debt each in dockless bike sharing companies, Vogo and Bounce through BAC Acquisitions.

Last month, bike rental startup Bounce had raised $3 Mn in debt funding from its existing investor InnoVen Capital in order to increase the number of its vehicle to reach a critical density to make a meaningful impact on how the city commutes.

The first and last mile mobility market in India has the potential to be even bigger than ride-hailing, making it of interest to both Ola and Uber. However, the business model comes with its own set of challenges including building infrastructure for electric mobility, the density of vehicles, as well as customer awareness of the use case itself.

Ola is expected to integrate Vogo in its app by next quarter. All companies in this space have aggressively been scouting for debt and striking partnerships with OEMs as they look to enter the electric two-wheelers and micro-mobility space.

— With Inputs From Shreya Ganguly

The article had earlier mentioned that Yulu has raised INR 30 Cr of ‘debt’ round instead of ‘equity’.