Can Ola-Backed VOGO Take Its Promising Bike Rental Success To An Electric Future?

Can Ola-Backed VOGO Take Its Promising Bike Rental Success To An Electric Future? 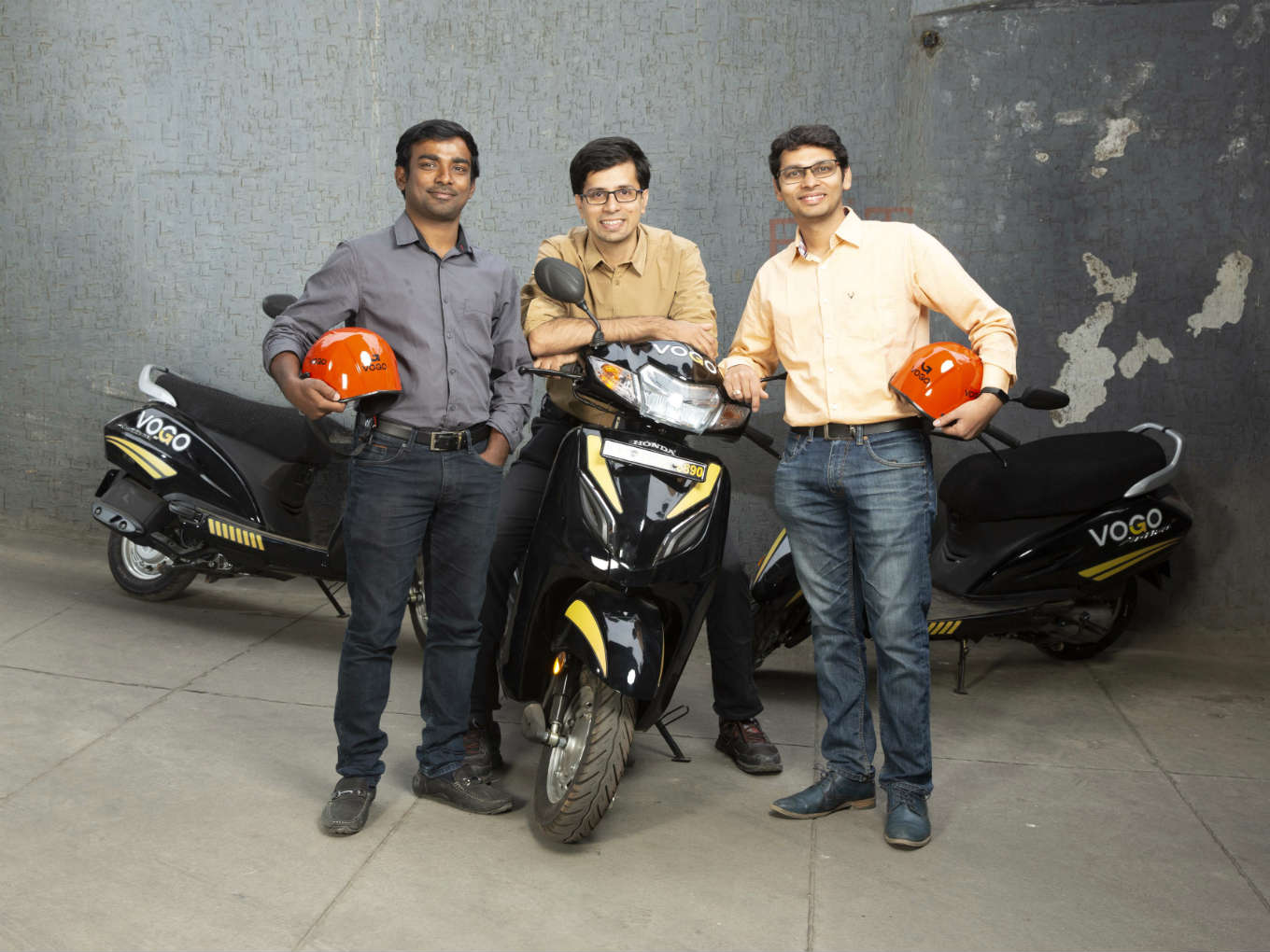 Handling around 4-5 Mn rides a day across the country, Ola and Uber have now become an essential part of Indian mobility space, particularly in major cities and metros. However, those figures are still insignificant compared to the trips completed in micro-mobility space which stands at 66% of the total trips. Therein lies a huge untapped opportunity.

In 2016, not only did Ola and Uber launch their bike taxi services in India, but a host of other startups also entered the space. However, just the bifurcation of the cars market into ride-hailing/sharing companies such as Uber, and self-drive car rental service platforms such as Zoomcar, the two-wheeler ride servicing platforms are also split into models with platforms offering bike taxis (Rapido) and platforms offering on-demand rental services (VOGO).

As with many other startup sectors, Bengaluru remains the hub for two-wheeler ride servicing platforms as well. Around a dozen of startups — Rapido, Bounce (Metro Bikes), Fae Bikes, QuickRides, VOGO, Wheelstreet and Yulu — have mushroomed in the city, in the last couple of years. It’s not just Bengaluru alone — other apps such as Mobycy and Baxi are headquartered in Gurugram.

The micro-mobility space has its own set of challenges, such as poor road infrastructure, increasing carbon footprint, and policy-related hurdles. Recently, the Karnataka state government had asked Ola and Rapido to stop bike taxis’ operation due to the fact that the state has no policy for bike taxis and the government thus has termed bike taxis illegal.

Given this situation, a few startups such as Mobycy, Fae bikes and VOGO have managed to carve out a niche in the untapped bike-sharing and rental space.

Founded in 2016 by Anand Ayyadurai, Padmanabhan Balakrishnan, and Sanchit Mittal, Bengaluru-based VOGO, growing at 10X annually has been on a dream run since coming on to the scene. Interestingly, it started out with a fleet of cars and scooters, before pivoting to a scooter-only model. Currently, it’s looking to expand its fleet and increase the share of electric scooters in its roster.

Unlike the popular Goa-model where bikes are rented for days and months, VOGO provides on-demand dockless, scooter-rental services where charges are levied per kilometre and/or per minute. The company has also filed patents for its innovations, which make it a lot more customer-friendly. For instance, their app which earlier used OTP to authenticate bookings now uses Bluetooth to unlock the parked scooters, which helps reduce friction for the customers.

Inc42 spoke to cofounder and CEO Ayyadurai to decode the mantra behind VOGO’s initial momentum.

Inc42: Tell us about the making of Vogo?

Anand Ayyadurai: After post-graduating from IIM Ahmedabad, I worked for AstraZeneca for two years and then with Flipkart in various leading capacities for almost three years and later joined Housing.com, as the associate vice president for few months.

At Flipkart, I got in touch with Paddy (Padmanabhan Balakrishnan) who also used to work at Flipkart and Zoomcar and at Housing.com, I met Sanchit. I am thus a common link between the two.

By 2015, with a desire to set up our own business, we were exploring different ideas. The idea was not only make something big but something physical. We wanted to build and operate physical products which are equally backed by technology. I, personally, at Flipkart loved the idea of delivering physical products to the customers.

In the ride-hailing, we saw a lot of friction and gaps at various points during the ride. And, therefore, the initial idea was to build a car and scooter-sharing platform. While cars were supposed to meet the inter-city requirements, scooters were to meet intracity requirements.

This is how we started.

Inc42: So, you started with cars and scooters, but now only focus on scooters; why did you drop car-sharing?

Second, in most of the cities of India, it is the scooters which are not only economical but also cater to the Indian riders needs, considering the traffic and road infrastructure. A large segment of people can’t afford cars or taxis at all.

As we grew, we realised it is better to focus on one opportunity at a time.

Inc42: Many of the Indian states do not have the right policies for bike taxis. Recently, Ola and Rapido were banned from operating bike taxis in Bengaluru. Does such news bother you?

Anand Ayyadurai: Bike taxis are operated under different permit mechanism. Our model is completely different from that of Ola. Our permit is similar to what Zoomcar has.

Inc42: Which cities are you operating in? What is the current fleet capacity?

Out of the 5K, 200 scooters are electric which we have launched in HSR layout on a pilot basis. In Chennai also, we have introduced some electric scooters at some of the metro stations in order to provide last mile service.

Among the Tier 2 cities, we are keen to launch in Mysuru as well.

Inc42: Electric bikes have their own pros and cons. The high charging time and limited running time scales down their availability. What’s your take?

Anand Ayyadurai: We launched electric scooters in January. Yes, with electric scooters, there are other issues that we have to tackle. For example, we have asked their manufacturers to add extra features such as data related to battery management; how many kilometres the electric scooter may run with the remaining battery etc. We have also asked them to make these scooters more rugged to have a longer life.

In the case of electric vehicles, it is essential for customers to know how long this vehicle could run. Most of the electric vehicles run 40 Km-50 Km on a single charge. Once the vehicles are below half charged, customers are always worried if it would at all take them to the destination.

Currently, we have electric scooters only at HSR layout where we have installed 10 charging stations.

Inc42: The government intends to go 30% all-electric by volume by 2030; but, there is no policy in place outside FAME. What needs to be done?

Anand Ayyadurai: Today, the largest electric vehicle (EV) market (In India) is of 3-wheelers. In Delhi, there is a very large 3-wheeler EV market and now slowly, 2-wheelers have started picking [up].

We bought our vehicles before FAME II came into place. However, we did get the benefits of around 20K-25K bucks per vehicle in accordance with FAME I. So, definitely, FAME has been a beneficial scheme for us.

However, for us, keeping the uptime of vehicles high is important, and there are areas where the government is expected to bring clarity.

Secondly, the government needs to clarify what kind of infrastructure it is going to promote — charging or swapping.

This will attract investments. If today, we find swapping is going to be the future, we can think of investing INR 50-INR 100 Cr in developing the infrastructure.

If the government won’t do, the industry will find its own way; however, it might take time.

By the end of the next year, I see there won’t be much of charging issue. There are more companies planning to enter electric scooter space in a big way including Ather Energy. And, we can expect more charging stations across the city which will definitely resolve the users’ worries.

Inc42: Maintenance could be a huge issue. How do you meet the maintenance requirement of these dockless scooters?

Anand Ayyadurai: A lot of effort has been made to upkeep the vehicle’s conditions. It is not just to reduce the maintenance cost, but the downtime as well. More the downtime of vehicles, the more it impacts the revenue. This adds to the time loss as well as customer loss.

Unlike four-wheelers, scooters are hired for short trips. Hence the customers’ expectations are also small. They want just to reach out to the destination safely. While maintenance is done frequently almost on a monthly basis, in case of any sudden breakdown support could be provided within a few minutes.

Anand Ayyadurai: We are doing multiple things with Ola. One of the stuff (sic) that you might have heard is that Ola has invested $100 Mn in VOGO to enable the later to get 100K scooters.

The second thing is getting listed on Ola platform. We are still working on the mechanism. By the end of this year, you will see VOGO listed on Ola too.

Anand Ayyadurai: On the supply side, unlike ride-hailing platforms, we don’t need to incentivise anyone. It’s simply a scooter which comes at a fixed price. The cost is less than INR 4/ Km which includes fuel, maintenance and EMI combined. We are currently charging INR 5/Km.

Operationally, our business does not need money but for faster expansion.

Inc42: What’s the plan down the line?

Anand Ayyadurai: Our plan is to be across all the cities in the next 2-5 years. But, for the next 9-12 months, the focus remains at deepening our presence on Bengaluru and Hyderabad. However, at the same time, we are also making our small presence in other cities like Chennai, which could be scaled up later.

Currently, we have 100-110 spots where bikes could be found. Within 2-3 months, we aim to double this. In the case of electric bikes, we are still figuring out the best places to park the scooters as it needs charging points as well.

With an aim to achieve 10% electric scooters, we have planned to have 100K scooters by this year-end.

The Changing Equation In The Mobility Space

VOGO, in a short span, has managed to raise over $116 Mn and the business model looks especially promising; be it, going 10% all-electric or acquiring 100K scooters by 2019-end.

And, it is not only VOGO but the fact that two-wheelers makes 81% of the total domestic market implying that Indians are more accustomed to riding two-wheelers than any other vehicles that have also attracted big investors from India and abroad.

However, expansion of this new market is not all good as two-wheelers are also the significant carriers of carbon footprints. Despite the lack of an effective policy, as has been the complaint from many ventures in this field, startups and entrepreneurs dealing with micro-mobility have already stepped up to embrace the e-mobility as future, a route which Ola is badly struggling to keep up.