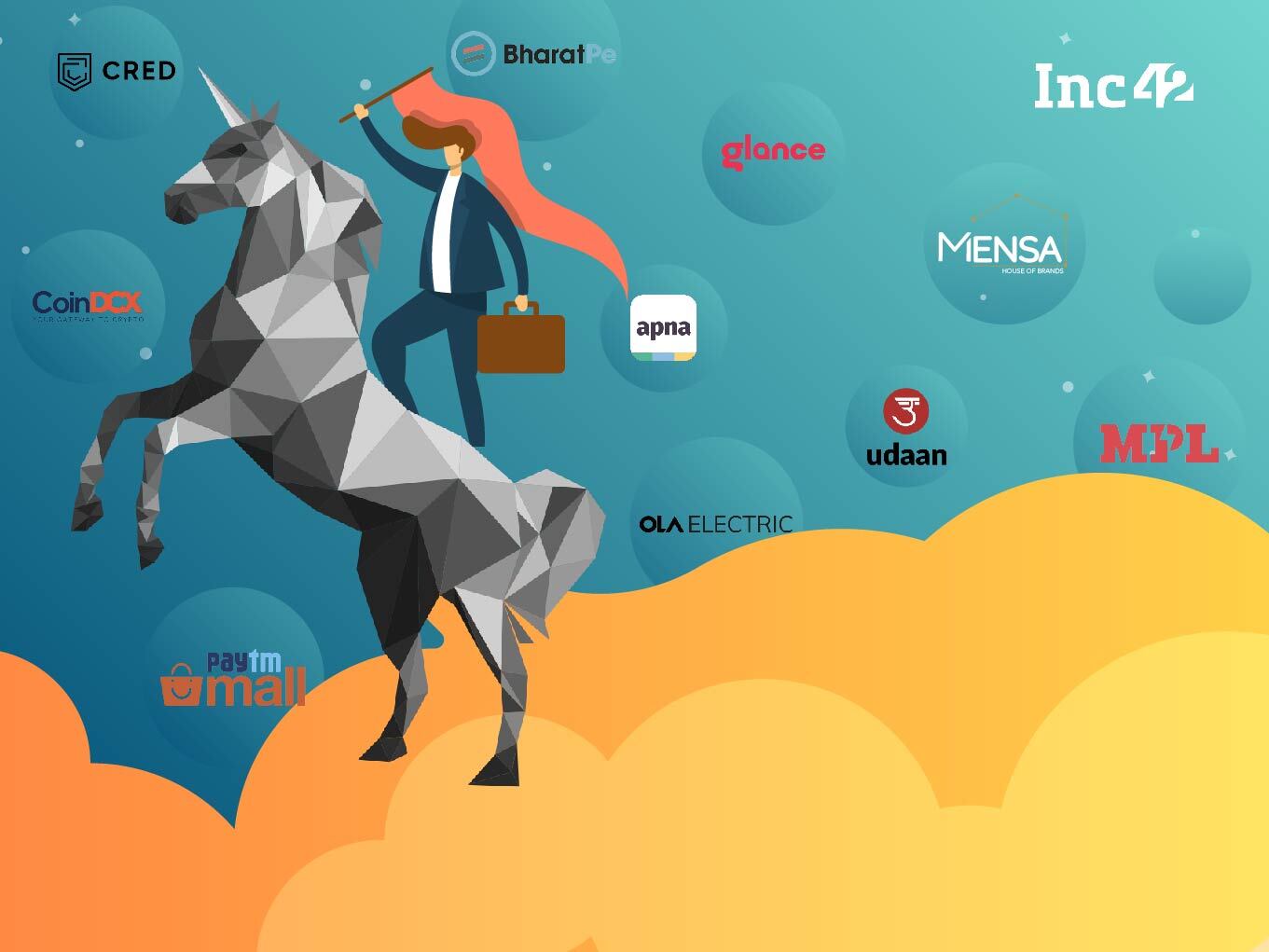 Thrasio-style venture Mensa Brands became the country’s fastest unicorn after raising $135 Mn in Series B round, in six months since its inception

Before Mensa Brands, Naveen Tiwari-led Glance topped the list and it was not Apna as the media reported

MPL, CRED, and BharatPe were among the startups that entered the unicorn club with more than $2 Bn valuation

Unlike the US or China, Indian entrepreneurs love to celebrate when their peers achieve a billion dollars valuation. One simple reason behind this celebration can be the fact that the Indian ecosystem blossomed much later than the US or China. For instance, according to a CB Insights report, the US and China have 423 and 165 unicorns respectively. However, India is catching up to the speed of these developed countries.

At present, India has the third-largest startup ecosystem after the mentioned countries. The year 2021 turned out to be rather unexpected and eventful after Covid-19 rampaged. The year saw the rise of a record 36 unicorns in the country. It is interesting to highlight that this year has produced almost 46% of the total 78 Indian unicorns. Checkout our Indian unicorn tracker for more details.

Earlier this week, a Thrasio-styled venture entered the Indian unicorn club within six months of its inception, turning several heads.

In this article, we will look at the top ten startups that entered the Indian unicorn club the fastest.

The Indian D2C market has witnessed a spurt of growth in the past couple of years, mostly riding on the increase in Internet penetration and shift in customer purchase trend induced due to the pandemic.

It’s a no-brainer that aggregators of these D2C brands which often follow the ‘Thrasio’ model by acquiring these brands and helping them with capital and reach have also grown exponentially.

Founded in May 2021 by Ananth Narayanan, Mensa Brands which has already partnered with 12 brands is the fastest unicorn that the startup system has witnessed. It mopped $135 Mn in its Series B round led by Alpha Wave Ventures, and Falcon Edge Capital at a billion-dollar valuation. It raised Series A of $50 Mn in May this year.

Glance, the AI-driven personalised content provider, entered the celebrated unicorn club within 18 months after it started its operations. Glance, which operates under the country’s first unicorn InMobi, crossed the billion-dollar valuation in December last year.

Naveen Tiwari led Glance mopped up around $145 Mn investment from Google and existing investor Mithril Capital. The startup back then claimed that it has 115 Mn daily active users (DAUs) who spend 25 minutes per day consuming Glance’s content.

The recently listed Paytm which operates the ecommerce platform Paytm Mall was the third-fastest startup to have achieved unicorn status in 2018. The startup picked $445 Mn in a funding round led by Paytm’s largest shareholder Alibaba, along with Masayoshi Son’s SoftBank.

The B2B ecommerce platform Udaan, which is on a spree raising debt funds crossed the billion-dollar valuation mark in 2018 after picking $225 Mn from DST Global and Lightspeed Venture Partners. Founded by three former Flipkart employees Sujeet Kumar, Vaibhav Gupta, and Amod Malviya, Udaan has on boarded 30 lakh retailers, 25K sellers, and operates in 900 cities. It took Udaan around 22 months to become a unicorn.

The startup’s valuation has almost tripled now to $3.1 Bn after raising $280 Mn from Octahedron Capital, Moonstone Capital, and Lightspeed Ventures along with others.

Udaan is also in talks to go for public listing within 2 years.

The brainchild of Bhavish Aggarwal – the man behind country’s indigenious online cab aggregator Ola Cabs competing against Uber – Ola Electric secured its spot in the unicorn club within 25 months after securing its $250 Mn funding in Series B round from SoftBank in 2019.

The startup has launched its two e-scooters S1 and S1 Pro and claimed that it has sold electric scooters worth INR 1,100 Cr within two days of opening sales. The deliveries are yet to be made.

The classified for the ever-growing blue-collar workforce in the country – Apna was the youngest unicorn before Mensa Brands. The Nirmit Parekh founded startup achieved the unicorn status within 28 months after inception after securing $100 Mn in its Series C round led by Tiger Global along with participation from Owl Ventures, Insight Partners, Sequoia Capital, Maverick Ventures and GSV Ventures.

In June this year, the startup had raised $70 Mn in its Series B round led by Tiger Global and Insight Partners. 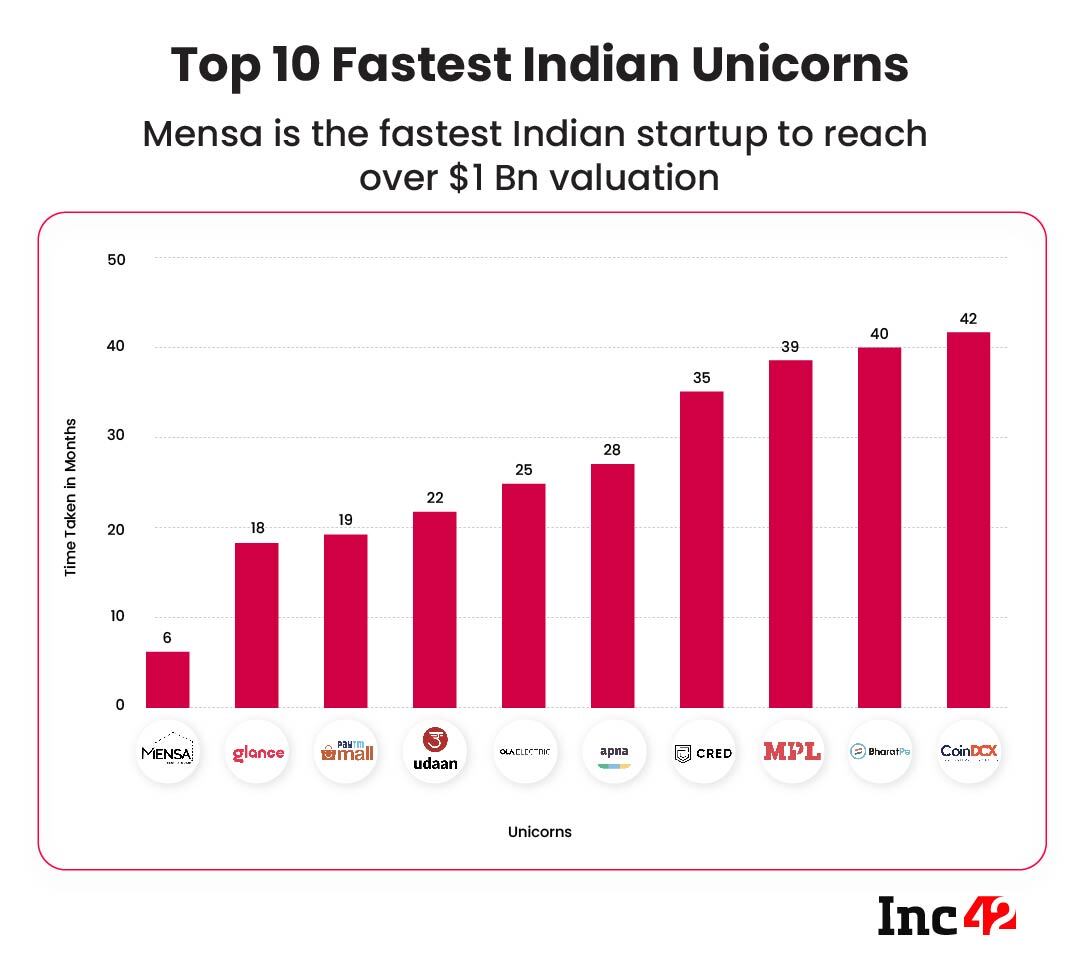 Angel investor and serial entrepreneur Kunal Shah-led fintech startup CRED were one among the six startups that entered the unicorn club in the second week of April after securing $215 Mn in its Series D round. It took CRED around 35 months since its inception to cross the billion-dollar mark in terms of valuation.

However, it is worth highlighting, CRED entered the unicorn club at a $2.2 Bn valuation. In October, the startup almost doubled its valuation to $4.01 Bn after raising $251 Mn from Tiger Global and Falcon Edge.

India’s esports gaming startup Mobile Premier League (MPL) entered the unicorn club in September this year after raising $150 Mn in its Series E round. The Bengaluru-based startup took 39 months since its inception to reach $2.3 Bn valuation. The round saw participation from Legatum Capital, Accrete Capital, Gaingels LLC, and others.

New Delhi-based merchant payments and financial services provider BharatPe– after raising $370 Mn in Series E equity round led by Tiger Global entered the unicorn club at a valuation of $2.85 Bn in August year.

Dragoneer Investment Group and Steadfast Capital have come on board as new investors, while Coatue Management, Insight Partners, Sequoia Growth, Ribbit Capital, and Amplo added to their earlier investments in BharatPe.

It took Ashneer Grover-led BharatPe 40 months since its inception in 2018 to become a unicorn.

Crypto exchange CoinDCX became the first crypto exchange platform in India to have entered the unicorn club after closing $90 Mn in Series C funding round, led by Facebook cofounder Eduardo Saverin’s B Capital Group as well as Coinbase Ventures, Polychain Capital, Block.one, Jump Capital among others.

The round helped CoinDCX’s valuation soar to $1.1 Bn after 42 months of operation. CoinDCX was founded in 2018 by Sumit Gupta and Neeraj Khandelwal and competes against other crypto exchange platforms such as Coinswitch Kuber, WazirX, Zebpay, among others.

Mihir Malhotra contributed to the piece.

Disclaimer: We have taken the incorporation date of every startup available on the Ministry of Corporate Affairs website for comparison