Prashant Tandon, CEO of 1mg, joined Inc42 in the latest ‘Ask Me Anything’ session 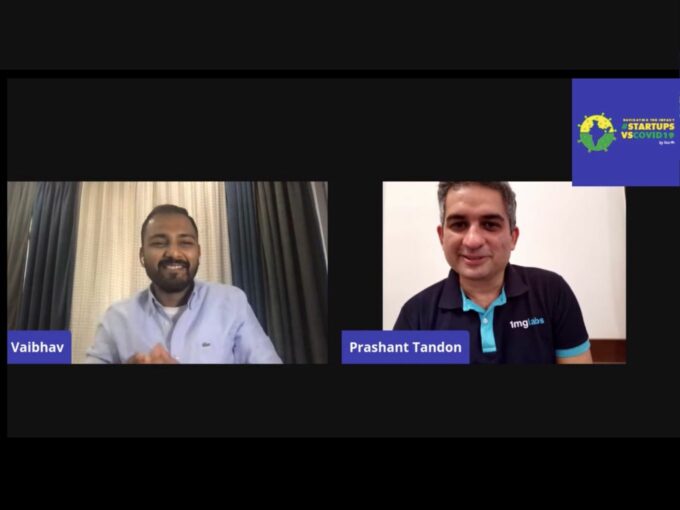 A global health emergency like coronavirus has put a spotlight on the healthcare industry, with every stakeholder fighting from the frontline. Speaking to Inc42, Prashant Tandon of 1mg called the pandemic a structural shift for digital healthcare in India. It is akin to what demonetisation was for fintech.

Tandon was speaking to Inc42 cofounder and CEO Vaibhav Vardhan in the fourth edition of our Ask Me Anything series under the #StartupsVsCovid19 campaign. He touched upon a range of topics in the hour-long session, which included the surge in the demand for an online healthcare marketplace and what new avenues might open up once the lockdown ends, funding opportunities in the healthtech space and more.

According to Tandon, recognition of telemedicine as an essential service by the government had brought in a massive shift for healthtech companies.

“We have had a lot of regulatory questions for a long time now, suddenly we found ourselves become an essential service. That was a big regulatory change for the industry,” he said.

In August 2018, the government had released guidelines for online pharmacy companies under the Drugs and Cosmetics Act. After multiple feedback rounds and more than a year later, there has been no update. In response, Tandon had said in December 2019, that the long policy holdup was causing issues in ease of doing business for epharmacies. He had then also noted the telemedicine companies have been in discussion with regulators and ministries for over four years and have participated in multiple stakeholder discussions.

On similar lines, Pharmeasy cofounder and CEO Dharmil Sheth has also said that the government should acknowledge the benefits of digital penetration in the category. The Coronavirus lockdown seems to have done exactly that for the sector.

In the ongoing national lockdown, epharmacies were declared an essential service leading to the majority of Indians depending on telemedicine platforms such as 1mg for their doctor consultations and medicine deliveries.

“This has brought a massive shift in terms of the consumer mindset. Patients have started to realise a lot of value in healthtech. Patients now realise that they don’t have to expose themselves to undue risk if healthcare can come directly to them,” said Tandon.

He pegged this moment as a strong fundamental disruption for healthcare delivery at home. While teleconsultations will not take over completely, they will replace less critical follow-up consultations and minor diagnostics.

Doctors have now started recognising the need for technology to engage better with their patient base. Hospitals too have become receptive of the change, as most of them are seeing a 40%-50% reduction in footfall. “Suddenly they have started to feel the pain that they are not connected with the patient when they are at home,” said Tandon. Onboarding doctors on telemedicine platforms has been a major challenge in the sector. Realising which, existing telemedicine companies have even adapted to models like collaborating with hospitals, or local pharmacy chains.

For Tier 2 and Tier 3 markets, Tandon predicted that assisted retail model will grow. Which is essentially a self-enterprising individual who downloads the app and helps the local community access consultations online. He noted that the 1mg has witnessed 50-60 consultations being booked from a single account registered from a non-metro city.

Talking to the healthtech startups, Tandon said, “This year is about surviving for everybody. All structural points are very much in favour of healthtech. This year capital will be tight, be real about it.”

In terms of funding, he said that there is optimism for early-stage healthtech startups, as the VCs have a lot of dry powder there. However, for growth-stage companies it is going to mostly be a wait-and-watch game.

In the post-Covid-19 world, Tandon believes consumer behaviour would shift towards teleconsultations. The consumer’s fundamental pain point has never been about saving money on healthcare or ignoring it, it’s always about access. “It’s about the inconvenience of going to a doctor’s clinic, waiting for two hours, and having to leave work early. But with telemedicine they can consult the doctor anywhere without having to go through the hassle of visiting a clinic. I think teleconsultations will now become more acceptable because the initial friction has been removed,” he said.

Further, the involvement of corporates and insurance companies in digital healthcare would also go up.

“The other thing that I foresee is that pharma industry will have to reimagine its supply chain and business models.”

Last week, LogiNext’s CEO Dhruvil Sanghvi had also noted that a big change in the logistics industry will be increased supply chain visibility.

According to Tandon, pharma companies do not have enough visibility in their supply chains right now.