According to Bhatia, Mishra allegedly attempted to extract sexual favours in exchange for higher equity in a new company that was not part of the Good Glamm deal

Nearly five years after it was rocked by sexual harassment allegations against a cofounder, ScoopWhoop is once again at the centre of a storm, which involves the ex-CEO Sattvik Mishra.

A day after Mishra resigned from his post as the chief executive on February 06, 2022, a former ScoopWhoop employee Samdish Bhatia alleged sexual harassment and assault by Mishra, one of six cofounders of the company, which he claims took place in October 2021.

“I was sexually assaulted by the CEO of Scoopwhoop Pvt Ltd, Sattvik Mishra. I have been denied my truth and punished for just wanting to live my life,” he alleged. 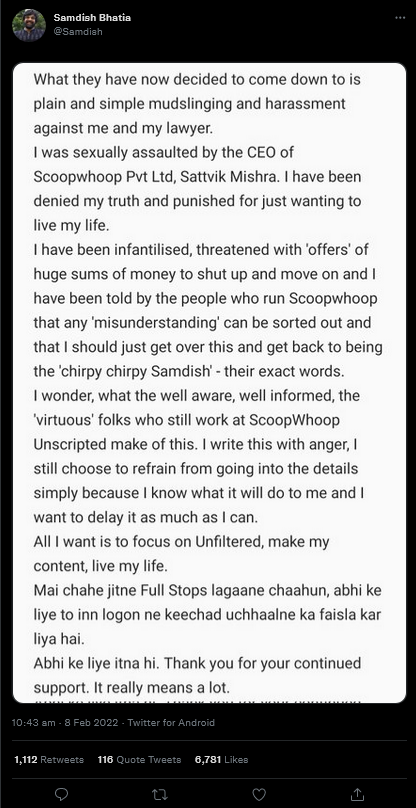 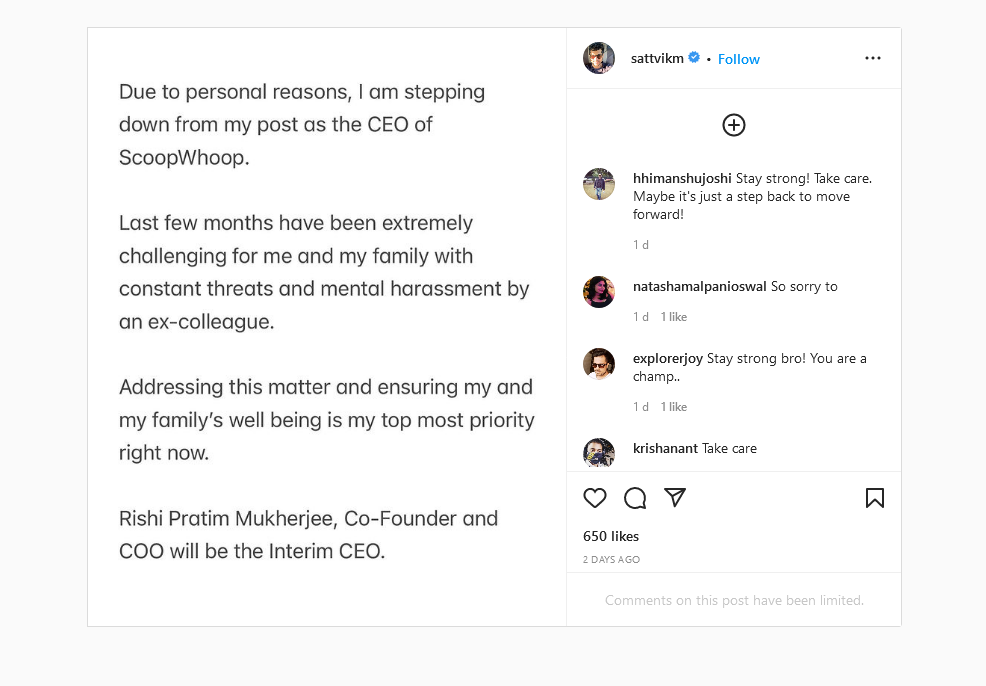 After facing allegations of sexual harassment and abuse against cofounder Suparn Pandey, this is the second time that a cofounder of the company has been accused of sexual assault. While the 2017 story saw a lengthy rebuttal from Mishra himself, this time he is the one that is being accused.

But more importantly, the allegations have once again shed light on the dark side of the startup ecosystem and the politics of power at the workplace. Coming at a time when startups are looking to make a bigger positive impact on the Indian market and society, the need of the hour is to understand where they are falling short. Given that this was a multimillion-dollar buy-out, there are obvious questions about whether the ecommerce unicorn conducted a thorough due diligence audit into the company it is acquiring.

We will come to those larger questions at the end, after a look at what exactly happened at ScoopWhoop.

Over the past nine years, ScoopWhoop has launched multiple properties besides its main website, including ScoopWhoop Hindi, the women-centric Vagabomb, documentary and news show Unscripted, as well as YouTube channels OK Tested and ScoopWhoop Videos. It has raised a total funding of around $5.2 Mn from investors such as IgniteWorld, Kalaari Capital, AdvantEdge Founders and Smile Group.

These digital properties are claimed to have generated more than 1 Bn impressions monthly and with over 100 Mn users. Incidentally, the Unscripted series began life under the name Chase and the first few episodes of the series were created by ScoopWhoop in association with Newslaundry. The Morning Context and Newslaundry were among the publications to first report on this incident.

On October 20, 2021, ecommerce unicorn Good Glamm Group announced that it would be acquiring the digital media and lifestyle content platform to push its content-to-commerce play. At the time, it was stated that ScoopWhoop will continue to work as an independent brand and media house within GGG. Mishra was named as one of the leaders of this new ScoopWhoop, along with cofounders Rishi Pratim Mukherjee and Sriparna Tikekar.

At the centre of the story is Unscripted which is a news and current affairs property and as such could not be included in the GGG acquisition bid for ScoopWhoop, due to India’s rules around foreign investments in online news platforms.

The ScoopWhoop acquisition was seen as a key cog in Good Glamm’s plans to dominate the D2C and ecommerce wave in India. The self-proclaimed “Digital House of Brands” was born from D2C beauty and personal care ecommerce platform MyGlamm. ScoopWhoop was part of its content-to-commerce strategy, towards which GGG had previously acquired POPxo in 2020.

Now, post-Mishra’s resignation, Mukherjee has been appointed the interim CEO of the company. Interestingly, Mishra’s wife Tikekar is also at the centre of the current controversy.

The Chain Of Events

Here’s what we know so far about the most recent case, as per reports today, which involves Mishra, his wife Tikekar, the current CEO Mukherjee as well as Bhatia.

Bhatia who is the anchor and host of ScoopWhoop’s popular news and documentary channel Unscripted, has accused the Mishra of sexual assault, which he said occurred in October 2021, at a time when ScoopWhoop was about to be acquired by GGG.

The alleged assault took place immediately after a meeting where Mishra and Bhatia were said to be discussing the latter’s equity stake in the new company being spun off from ScoopWhoop for Unscripted. It was not going to be part of the deal with GGG due to the FDI restrictions, but the official announcement by the company does not mention this fact.

Bhatia, seen as the face of Unscripted by its audience, was going to be offered equity in the company, as per reports. He had asked for a 25% equity stake in the new company, and was offered 7.5% instead.

Avlok Langer, the company’s creative director for non-fiction content, was also present at this meeting, which is said to have taken place in an undisclosed bar in Delhi, according to Newslaundry.

During the meeting, the trio are said to have had plenty of alcohol, and after last call at the bar, Langer split off from the group to head home, while Mishra and Bhatia continued onwards to Mishra’s apartment to keep drinking.

Bhatia has admitted to being inebriated on the evening in question and also claimed that Mishra was in a similar state. In a text message with Bhatia, the then CEO had said that he had mixed antidepressants with alcohol.

It was at this location that Bhatia has alleged the sexual assault took place. He claims that despite his wife Tikekar being present in the upstairs of the duplex apartment along with their child, Mishra made unsolicited sexual advances and was said to be in a state of undress while trying to force himself on to Bhatia.

According to the alleged survivor, Mishra attempted to extract sexual favours from Bhatia in exchange for higher equity in the new company that would run Unscripted.

In statements to Newslaundry, Bhatia alleged that Tikekar was not only aware of what was happening in the apartment, but at one point she was a witness to the episode but did not try to stop it. Bhatia claims her alleged inaction allowed Mishra the opportunity to assault him.

In his social media post, Bhatia has said that he also filed a complaint with the company’s internal complaints committee within days of the alleged sexual assault, but instead the company chose to sweep the allegations under the rug and tried to delay its response to allow the acquisition by GGG to go through.

Inc42 has sought clarification and responses from ScoopWhoop about the company’s compliance with the Prevention of Sexual Harassment Act (POSH) and the internal complaints committee that is mandated by the act. The story will be updated as and when we get a response from ScoopWhoop.

For his part, Mishra has denied the charges and accused Bhatia of fabricating the story to extort INR 7 Cr (roughly $1 Mn) from him. But according to chat transcripts published by NewsLaundry, Mishra did apologise for his alleged actions immediately after they are said to have occurred.

Denying that he’s trying to extract a payment from the company, Bhatia has claimed that he was offered hush money by Mishra’s associates, to bury his complaint.

While ScoopWhoop is no longer associated with Unscripted, it did form a new company to handle the property. WhoopScoop Media Private Limited is a spin-off of ScoopWhoop and has moved court to seek a permanent and temporary injunction against Bhatia and Mishra.

Inc42 has reviewed a copy of WhoopScoop’s court filing. The company, which has since changed its name to Million Views Media, argued that the dispute between Bhatia and Mishra was before an internal Grievance Committee and the allegations would adversely affect ScoopWhoop’s reputation and goodwill if made public.

The Patiala House court refused the injunction in the first hearing on January 22, 2022. The case is ongoing and will be heard later this week on February 10, 2022, as per reports.

Interestingly, in 2017-18 too, ScoopWhoop had turned to gag orders to take down stories related to the previous sexual harassment allegations. The current status of that case is unknown due to the gag orders.

Bhatia has questioned the existence of a so-called Grievance Committee referred to by WhoopScoop. The alleged survivor claims that no one responded to his complaints till suddenly an email popped up in January from WhoopScoop saying that an internal committee was looking into the complaints. The new company claimed that its response was delayed due to limited resources and the fact that it was incorporated recently.

But Bhatia has countered this claim and said that no committee had existed in the company during his time there. While he has questioned the company officially on the constitution of the committee, no answers have come yet about when the committee was formed and who is part of it.

An Acquisition Amid Serious Allegations

He also claimed that the current interim CEO Mukherjee also tried to brush off the claims soon after he made an official complaint. Bhatia claims that Mukherjee said any investigation into ScoopWhoop will hamper the deal with GGG and offered Bhatia other possibilities including more equity in Unscripted. This meeting is said to have taken place on October 22, 2021, two days after Good Glamm had announced the acquisition.

The Good Glamm Group is helmed by Darpan Singhvi, who is the founder and group CEO, while Priyanka Gill and Naiyya Saggi have been appointed as cofounders. Gill was the founder of POPxo, while Saggi had cofounded BabyChakra, both of which were acquired by Good Glamm.

Surely, given ScoopWhoop’s history of allegations against upper management, a closer look into its workings and six cofounders is warranted. It could be entirely possible that any documentation related to the complaint by Bhatia might have been hidden away from the Good Glamm Group, but this is exactly the kind of practice that has to be addressed by a due diligence phase.

Clearly, the company was in the middle of a major scandal, yet a multi-million dollar deal has been executed at the same time. Once again, this brings up the question of how much due diligence are investors and companies really doing before signing investment or acquisition deals.

Besides this, some heavyweights from the startup ecosystem have backed the company. The likes of IgniteWorld, Kalaari Capital, AdvantEdge Founders and Smile Group have invested in ScoopWhoop. IgniteWorld was founded in 2012 as a joint venture between VC giant Softbank, Yahoo Japan and Bharti Group, some of the biggest names in the tech industry. As per Crunchbase, ScoopWhoop is IgniteWorld’s only investment and it has also exited the company.

Whether it is the various issues at BharatPe, EaseMyTrip-YoloBus or allegations of a toxic politics at Nykaa, OYO and other startups, it’s clear that entrepreneurs need to look at more than product-market fit or scalability when building startups and also focus on the finer points that can derail success stories.