Matrimony IPO Subscribed 67% On Day 1: Will It Reach The Pre Specified $20.3 Mn Target?

Matrimony IPO Subscribed 67% On Day 1: Will It Reach The Pre Specified $20.3 Mn Target? 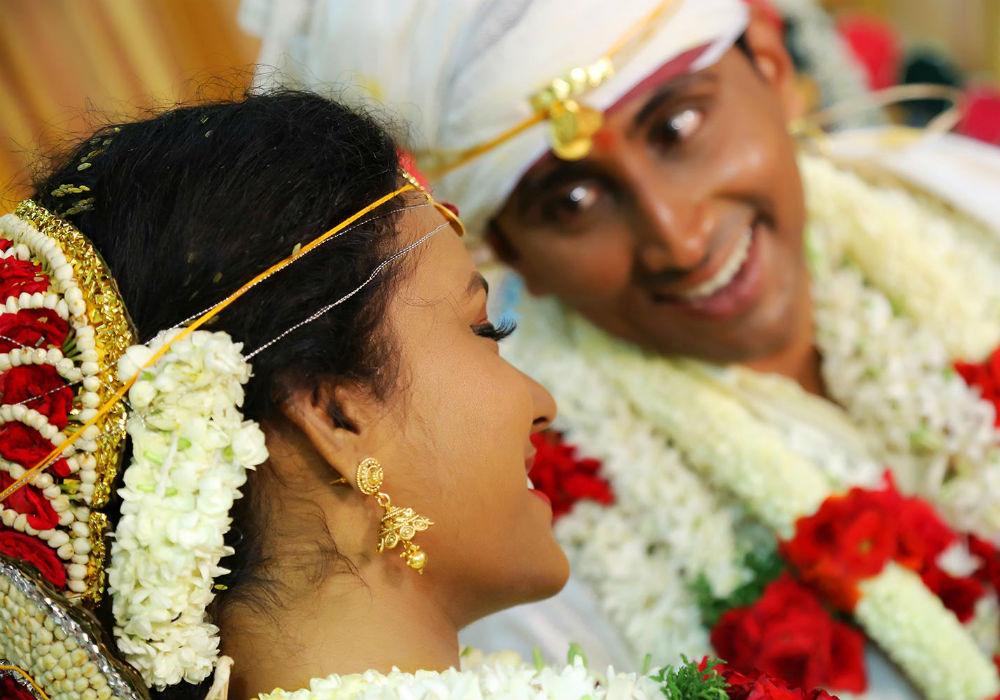 Chennai-based online matchmaking and marriage services provider, Matrimony, got the bid open for its IPO today. As per the available data on NSE India website, with the close of the market at 17:00 hrs, the IPO has been subscribed for a total of 67% on Day 1.

Announced earlier this month, the IPO will come to a close on September 13 and is expected to get listed on the Stock Exchange on September 21, 2017. Karvy Computers is currently serving as the chief registrar while ICICI Securities and Axis Bank are acting as the book running lead managers for the issue.

With this IPO, NSE data shows that Matrimony is looking to raise $20.3 Mn (INR 130 Cr) against approximately 3.7 Mn shares at a price band of INR 983 – INR 985. According to sources, around $3.1 Mn (INR 20 Cr) from the Matrimony IPO proceeds will be spent on advertising, business promotion and general corporate purposes, while $469K (INR 3 Cr) will be used to repay overdraft facilities. Of the remaining amount, about $938K (INR 6 Cr) will go into purchasing land for the construction of offices in Chennai.

The Fall In Expectations: From Announcing IPO To The Results On Day 1

The company originally filed its Draft Red Herring Prospectus (DRHP)with the SEBI for an Initial Public Offering (IPO) in August 2015 and got the SEBI’s nod a few months later in December 2015.

In October 2016, it was reported that the Chennai-headquartered online matchmaking and marriage services portal was planning to get listed by November this year.

As earlier reported by Inc42, at the time of IPO announcement Matrimony founder and CEO Murugavel Janakiraman stated, “We have expanded from BharatMatrimony to other regional languages and community sites to maximise our revenues and market share. We have 300 plus sites now. We have India’s first elite matrimony service for the rich and affluent. The company is planning to raise $82 Mn, of which $52 Mn as a primary offering will go into the company. If everything goes well, we will be listing in (the next) four to six weeks.”

As mentioned in the Draft Red herring prospectus of Matrimony, the IPO comprises an offer for sale of up to 3767254 equity shares to raise $20.3 Mn (INR 130 Cr). Here is how the shares offered for sale are divided between different stakeholders in the company.

Data from NSE shows that QIBs and retail individual investors (RIIs) were active bidders in the issue. Minimum order quantity or bid size is 15 shares, and in multiples thereof. 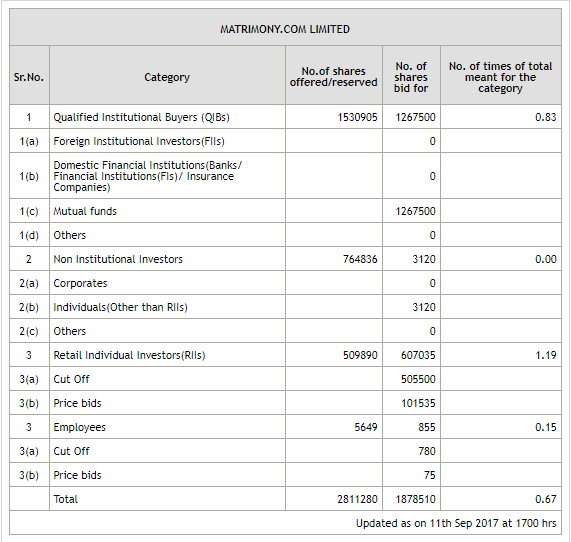 The issue is off to a moderate start in totality, as suggested by various stock market analysts before the opening of bids for the Matrimony IPO. As per media sources, the Matrimony IPO was said to be aggressively priced and the way cut-off has fallen on Day 1, certainly supports the prior analysis. However, there are still two days left which will eventually decide if Matrimony stands a chance of meeting its $20.3 Mn target. With this IPO, one of the major investors in Matrimony Bessemer Venture Partners is also looking for an exit.

The online matchmaking company owns a string of matrimony-related consumer internet properties including BharatMatrimony.com, EliteMatrimony.com, CommunityMatrimony.com, AssistedMatrimony.com, MatrimonyDirectory.com and Tambulya.com. Besides these, it also has a dedicated internet channel named tv.bharatmatrimony.com, which offers video clips of celebrity weddings, polls, and interviews among others.

Competing against Shaadi.com, Times Group’s SimplyMarry and Info Edge-owned Jeevansaathi, Matrimony boasts a valuation of around $715 Mn (as of October 2016). The online matchmaking company boasts a workforce of more than 3,500 employees in 140 offices across India.

Indian Tech Companies Taking The IPO Route On The Rise

As per a report by US-based research firm CB Insights, the number of IPOs filed by Indian technology companies has increased dramatically by over 400% between 2015 and 2016. As per the report, more than 10 tech startups in the country have opted for IPOs in 2017 so far, of which six took place in June and July.

Most recently, Mobile gaming studio Nazara Technologies announced plans to offer an IPO towards the end of FY18, making it the first public listing in the Indian gaming space. As per reports, the Mumbai-based company is looking to raise a total of $156.5 Mn (INR 1,000 Cr) at a valuation of somewhere between $469.7 Mn-$548 Mn (INR 3,000 Cr-INR 3,500 Cr).

Earlier in January, it was reported that Flipkart is on its path to offer an IPO within the next 18-24 months. In a related development, a Business Standard report stated that the ecommerce giant may be looking to list on NASDAQ early next year.

At a time when stakeholders in the Indian startup ecosystem have been witnessing consolidation as the last resort for exit, Matrimony IPO has opened doors to an old yet forgotten option. Of late, the Indian internet startups have been dependent majorly on investor money. Although the first-day performance of Matrimony cannot be said to be phenomenal, a decent listing on Indian Stock Exchange, NSE, and BSE will further encourage startups to opt the IPO route.

The article was composed with assistance from Meha Agarwal.