While Reliance issued a statement saying that it would go ahead with its acquisition of Future Group, legal experts feel that that would be unlikely

Legal experts tell Inc42 that Indian courts would respect the decision of the Singapore-based arbitration panel, citing a 2019 case with the Delhi HC as a precedent

Reliance can challenge the SIAC interim order under Section 17 of the Arbitration and Conciliation Act, 1996 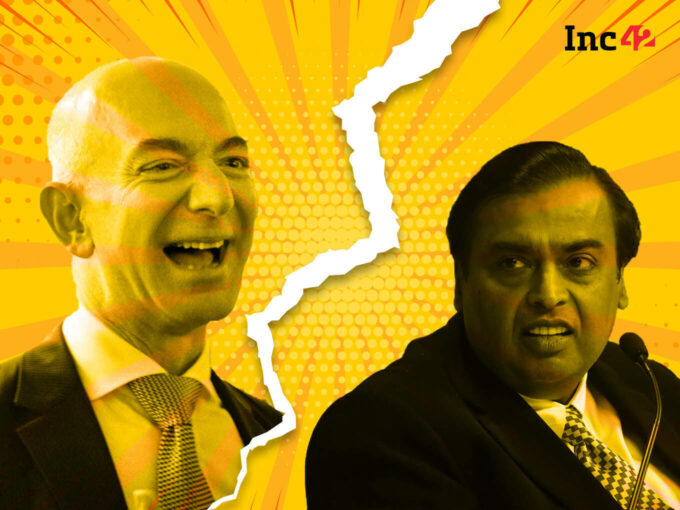 On Sunday (October 25), Reliance Retail Ventures Limited (RRVL) put up a defiant face and said that it would move ahead with its deal for the acquisition of assets and business of Future Retail Limited, despite the Singapore International Arbitration Centre (SIAC) ordering to put the INR 24,713 Cr deal on hold in response to arbitration proceedings initiated by US-based retail giant Amazon.

However, with a closer perusal, one would realise that Reliance’s statement is more for optics than for announcing its intentions.

Manoj K Singh, founding partner of New Delhi-headquartered law firm Singh and Associates feels that both parties would have to comply with the Singapore-based emergency arbitrator’s interim order since Indian courts have lately held that decisions taken by the SIAC are applicable in the Indian scenario as well.

“In an earlier judgement in 2016 — Raffles Design International India Private Limited ANR vs Educomp Professional Education Limited & ORS, the Delhi High Court had held that SIAC’s decisions aren’t enforceable under India law. However, in Steer Engineering Private Limited vs GlaxoSmithKline Consumer Healthcare decided by the Delhi High Court in 2019, the court chose to respect the decision of the SIAC. I believe that the 2019 case would serve as a precedent and that the court would uphold the decision of the Singapore-based arbitration panel,” says Singh.

He adds that Reliance would not be able to go ahead with the Future Group acquisition, since the deal signed last year between Amazon and Future Group mentioned that any disputes would have to be solved by arbitration, and hence, the decision of the emergency arbitrator is applicable on the Future Group.

It is worth noting that India’s antitrust watchdog, the Competition Commission of India (CCI) is also reviewing the online and offline aspects of the Reliance and Future Group deal and their impact on competition in the sector.

What Happened Before Amazon Went To SIAC?

Earlier this month, Amazon served a legal notice to Kishore Biyani-owned Future Group, over the latter’s alleged breach of a non-compete contract with the sale of its retail, wholesale, logistics, and warehousing businesses to Reliance Retail in August this year.

In August, Reliance Retail entered into a deal to acquire the retail, wholesale, logistics, and warehousing businesses of the Future Group for INR 24K Cr. Biyani’s Future Enterprises Ltd (FEL) retained the manufacturing and distribution of FMCG goods, integrated fashion sourcing and manufacturing businesses, its insurance joint venture with Generali, and a joint venture with NTC Mills.

What Does The Law Say?

Mayank Mishra, a partner at law firm IndusLaw, also says that the interim order by the emergency arbitrator is binding on both parties concerned — Amazon and Future Group. An emergency arbitrator is appointed, pending the constitution of an actual arbitral tribunal, to consider applications for urgent relief that cannot wait until the constitution of the actual tribunal.

Notably, the delay in the proposed deal between Reliance and Future Group could see the latter’s creditors see their loans to the company turn into non-performing assets (NPAs). The Future Group stakes sale was expedited by its creditors after Biyani had defaulted on loan repayments in March this year.

It is reported that Future Group firms owe around INR 16,000 Cr to a clutch of banks and debt mutual funds, while Future Group founder Biyani owes close to INR 11,000 Cr to lenders.

According to Namita Matthews, a partner at Bengaluru-based law firm Algo Legal, the arbitration proceedings could take up to a year to be completed. “The Party that does not succeed would also have the right to appeal, though the ambit of arbitration appeals is very limited. Nonetheless, there would be time lost by both sides,” she says.

“This, however, does not stop creditors of Future Group to start enforcing their claims, which could plunge Future Group into further serious financial distress.”

Mishra concurs with the assessment. “The creditors may wait and watch the approach for now. They would wait for the outcome of any appeal that Reliance / Future Group may file against the interim order by the SIAC emergency arbitrator. However, if the deal gets entangled for a prolonged period, they may consider legal options to enforce the debt recovery. Insolvency resolution options may also be considered once the suspension of Insolvency and Bankruptcy Code, 2016 (IBC) provisions is revoked or expires.”

Future Retail is India’s second-largest retail chain after Reliance Retail and has more than 1500 stores across 437 Indian cities and towns covering an area of 16 Mn square feet. It is the parent of brands like Big Bazaar, Fashion Big Bazaar, HomeTown, Food Bazaar, and others. Big Bazaar reportedly contributes about 80% to Future Retail’s revenue. Comparatively, Reliance Retail operates in nearly 12K stores across 6,600 towns and cities, covering an area of 28.7 Mn square feet.

Update — October 27, 2020, 9:06 PM: The previous version of the article erroneously stated, “Reliance can challenge the SIAC interim order under Section 17 of the Arbitration and Conciliation Act, 1996.”

The correct statement is, “Reliance can challenge the SIAC interim order under Section 37 of the Arbitration and Conciliation Act, 1996.”