Google’s much awaited UPI enabled mobile payments app is finally debuting in India and will be officially launched by the Finance Minister Arun Jaitley in the capital today. The news was confirmed by the finance ministry via tweet. Tez will enable Indian users link up their phones to their bank accounts to pay for goods securely in physical stores and online as well as allow person-to-person money transfers. 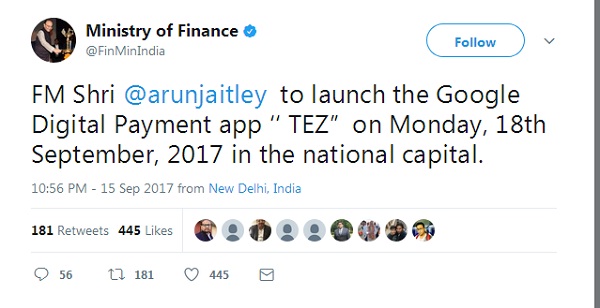 On the app’s website Google states, “Send money home to your family, split a dinner bill with friends, or pay the neighbourhood chaiwala. Make all payments big or small, directly from your bank account with Tez, Google’s new digital payment app for India.”

Tez which is launching today on iOS and Android in the country will see Google linking up with several major banks in the country through Unified Payments Interface(UPI).

Unlike popular Paytm, Tez is not a mobile wallet where one can store money and top it when needed. Instead it’s more like Apple’s Wallet which links up your phone with your bank accounts to let you use your phone as a way to channel payments from those accounts. Google has tied up with banks such as Axis, HDFC Bank, ICICI and State Bank of India and others that support UPI. Meanwhile its list of online payment partners include Dominos, RedBus, PVR Cinemas, and Jet Airways among others. Also, besides English, the app supports languages like Hindi, Bengali, Gujarati, Kannada, Marathi, Tamil, and Telugu. 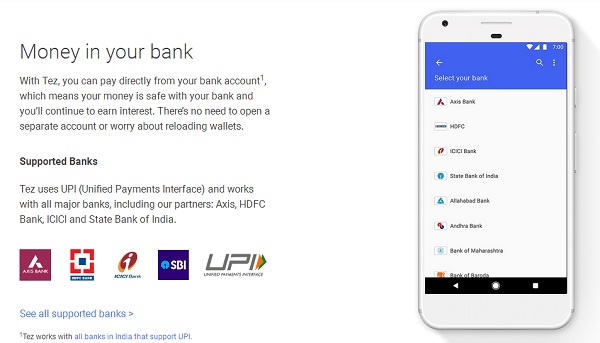 Additionally, there is also a separate business portal for online companies to integrate as sellers to accept Tez payments. As per the description, “Businesses also get their own Business Channels on the Tez app where they can engage directly with their customers to share offers and more.” 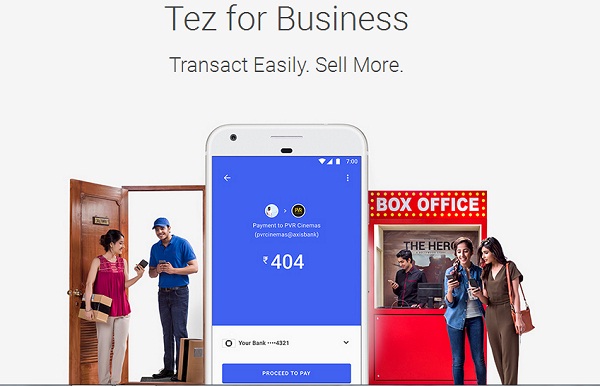 For money transfers, there is a limit of $1,561(INR1 Lakh) in one day across all UPI apps, and 20 transfers in one day. Payments can also be done to contacts on your phone if they have a Tez account or have a UPI address enabled. Cash Mode in Tez helps a user send or receive funds to/from accounts nearby without having to share any important details like phone number or bank account number. Every transaction is enabled with either the Tez PIN or the smartphone lock, whichever a user chooses.

Similarly, merchants with individual current accounts can receive up to $780(INR 50K) per month with UPI with no fees. Beyond that, one’s bank may charge fees or may impose additional requirements. In the near future, Google says that it will be adding debit card and credit card payment features on the app and there will also be reminders for recurring bills, as provided by Flipkart’s PhonePe.

Google And The Digital Payments Space In India

The Indian digital payments industry is projected to reach $500 Bn by 2020, contributing 15% to India’s GDP, as per a recent report by Google and Boston Consulting Group. No wonder, it has become the hotspot for major activity in the recent months given the rise in smartphone population and digital payments. Tech giants like Google, Amazon, Facebook, and WhatsApp are all lining up offerings to gather a slice of this developing market of the 520 Mn smartphone users predicted in the country by 2020 in the Google and BCG report.

In April 2017, a report by The Ken (paywalled) confirmed that the instant messaging app is expected to launch a peer-to-peer payment system in India. The interface is likely to be powered with the Unified Payments Interface (UPI) and is expected to launch within six months. Whatsapp has also reportedly approached SBI and NPCI for enabling UPI payments on its digital wallet. Also, recently the chat platform has taken the first step towards its monetisation with its WhatsApp for Business by partnering with online ticketing player BookMyShow.

The Indian payments space saw a lot of developments this year. For instance, home-grown unicorn, Hike Messenger launched a UPI-enabled digital wallet – Hike Wallet – months ahead of the proposed launch of digital wallet of rival WhatsApp in India in June this year.

Facebook had also announced in March 2015 that it would enable peer-to-peer payments through Facebook Messenger called M. Similarly not to be left behind in the Indian digital payments race, in April 2017, the Indian arm of the ecommerce giant Amazon secured the license from the Reserve Bank of India (RBI) to operate a prepaid payment instrument (PPI). As per the RBI website, Amazon Online Distribution Services Pvt. Ltd secured the licence in July.

While Tez is launching in India this week, Google has also trademarked the name in other Asian countries, such as Indonesia and the Philippines. This means Google will be looking to expand keenly into mobile payments in Asia. This makes India the first country in Asia where Google has forayed into payments. By association with Google and on account of the simple user interface of Tez, UPI will also get a further boost in payments. India is a promising market for digital payments compared to more mature countries like the US, where there is already widespread use of cards for payments but it is also a highly competitive one. With the entry of WhatsApp and Amazon in payments, the digital payments space in India will become a highly contested arena.