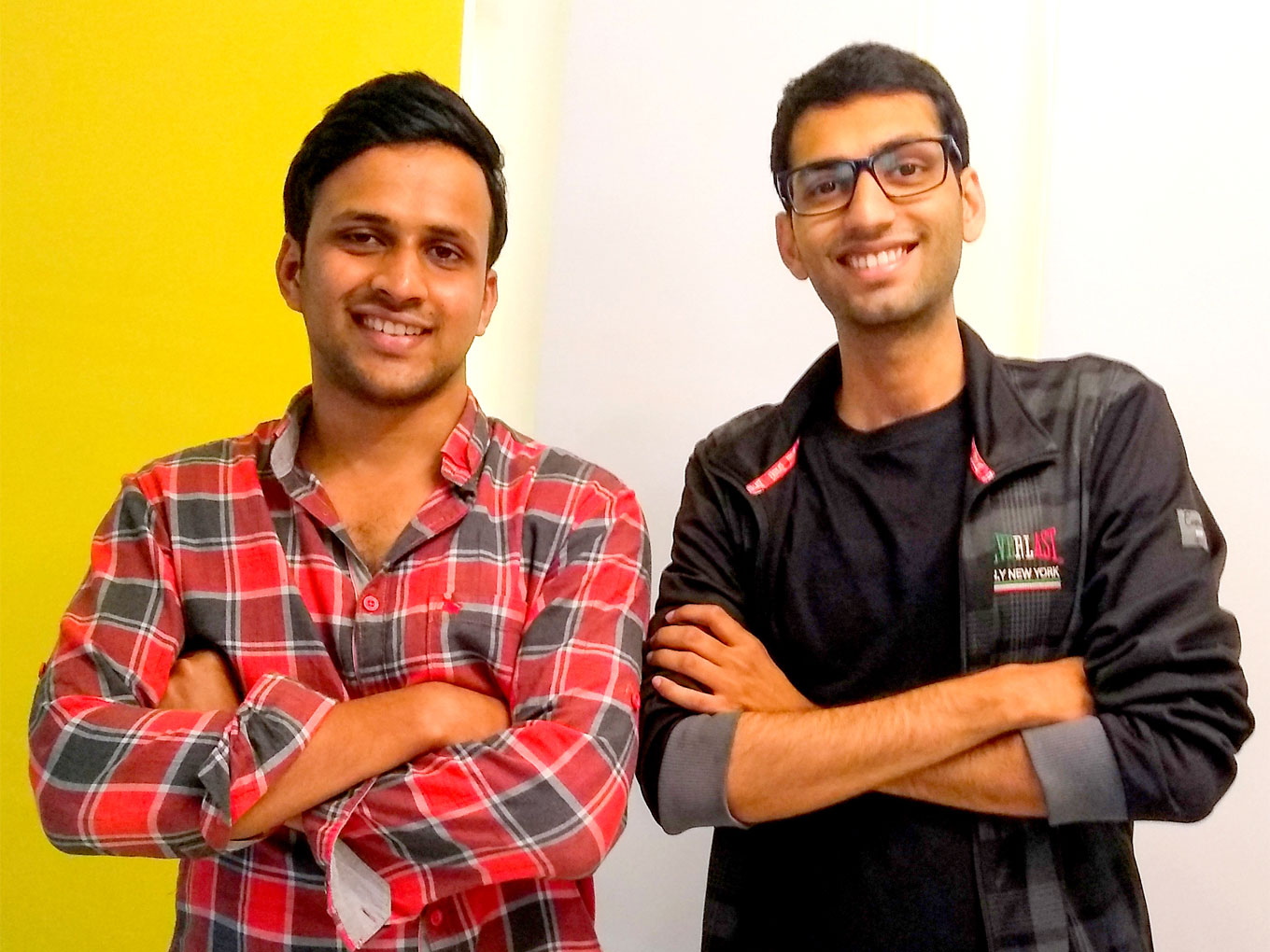 The investment from India Quotient will help Lokal strengthen its team and expand in key geographical areas.

Founded by Jani Pasha and Vipul Chaudhary in June 2018, Lokal aims to serve news to vernacular audiences based on their location, with separate language offerings for different districts across states. At present, it is present in only one district in Telangana.

The company is building a local news platform across India in native languages. Lokal uses qualified freelancers and on-ground journalists, who submit news on its platform. This enables it to deliver local news quicker than any other news platform.

Talking to Inc42 about the investors, Jani Pasha said, “Our investors have experience investing in leading vernacular platforms. They understand the user, which is a huge plus as they have seen Sharechat and Clip grow from scratch. Their advice will be of great value in building Lokal.”

Pasha shared that the company has raised enough funds to sustain for 12-15 months.

Earlier, in conversation with Inc42, at the time of the first close of its third fund, Prerna Bhutani, co-founder of India Quotient, had said that the team would continue to invest in networks such as social network ShareChat and digital media video startup Clip.

Lokal: Born Of The Demand For Vernacular News On Video

Jani Pasha had started his entrepreneurial journey with a recipe box delivery startup called HalfTeaSpoon, which he ran in Bengaluru for 10 months.

However, Pasha had to shut down its operations because of a lack of a market. Soon after, he joined the core product team of GoZoomo, an online used car marketplace, which expanded its operations to five cities.

Vipul Chaudhary worked in Qualcomm for 3.5 years as a part of its ‘New Initiatives’ team. After Qualcomm, he worked on products based on machine learning and natural language processing (NLP).

The duo worked together on a timeline-based news app, which used to cluster news in the form of a timeline for people to follow stories such as the Nirav Modi fraud case.

Pasha shared, “The product couldn’t reach a problem-solution fit. After multiple iterations, experimentation and user interviews, we figured out that there is a strong need for local news especially in Tier 2 and Tier 3 cities and towns of India. Plus, the preferred format of consumption for vernacular users is video.”

Soon, after experimenting on WhatsApp and figuring out the product-market fit, the duo launched Lokal.

A ‘Lokal Star’ To Weed Out Fake News

With a core five-member team at present, Lokal is servicing just one district — Suryapet in Telangana — where it provides locals news in their native language, generated through locals as well.

Pasha said that most of the users who submit news on the platform are not paid, as they do it for social value and for their name being affiliated with the news report.

Since the launch of its app, Lokal has seen 4,000-5,000 downloads. However, monetisation is not on the cards yet as the company is in a pre-revenue stage. 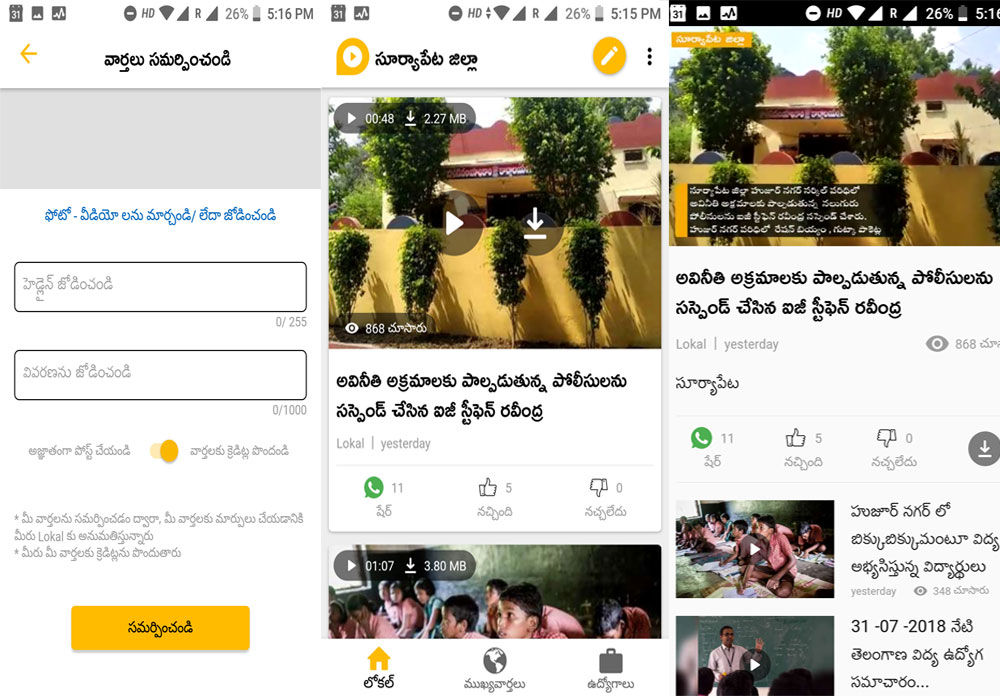 Pasha shared that at a later time, local advertising may be a source of monetisation for Lokal, among other methods.

The company claims to publish more news than local newspapers, and counts on its exclusive videos to push up its popularity.

At a time when media and social media companies across the world are being criticised for propagating fake news on their platforms, Pasha shared that Lokal avoids fake news by getting the news verified by its ‘Lokal Star’.

“In case of news items that need verification, the ‘Lokal Star’ gets them verified from elected politicians, police, or people working in the bureaucracy (government employees). This is a three-layer check and helps ensure our news is not fake,” Pasha explained.

Indian media companies and even global players have realised the importance of vernacular content.

Pasha said that Lokal is serving a largely underserved market in India which has got access to the Internet recently because of Jio and cheaper smartphones.

According to a report by Google and KPMG of July 2017, India currently has 234 Mn Indian language users online, compared to 175 Mn English users.

The user base of local languages will continue to grow at 18% annually to reach 536 Mn in the next four years, compared to the English Internet user base, which is expected to grow at just 3% to reach 199 Mn.

The study has found that adoption of the Internet through local languages has been led by services such as messaging (169 Mn), digital entertainment (167 Mn), social media (115 Mn), and digital news (106 Mn). Messaging will further grow to 396 Mn, digital entertainment to 392 Mn, social media to 301 Mn, and digital news to 284 Mn, respectively, by 2021.

“Lokal wants to be at the centre of the change happening in India by giving access to information — about jobs, government schemes, community etc — and wants to serve 700 Mn Indian users by 2022,” he added.

Talking about competitors, Pasha shared that Lokal’s edge is its relevant, exclusive, and reliable content.

“The thought process of people in smaller and remote areas is like — ‘I am more concerned about my community as I want to live here my entire lifetime. Government schemes, local happenings affect me directly’,” said Pasha. And this is just the kind of hyperlocal content and news Lokal aims to provide through its network of local journalists.

Although Lokal is hardly a month-and-a-half old, Pasha had big dreams for the company — he wants to expand its services and wants Lokal to become a habit-forming app. He wants users in tier 2 and 3 cities and towns to visit the platform every day for their daily dose of local news.

Lokal seems to have got its game on point, given that only 31.16% of Indians reside in urban India, and the demand for vernacular content is set to soar in future.