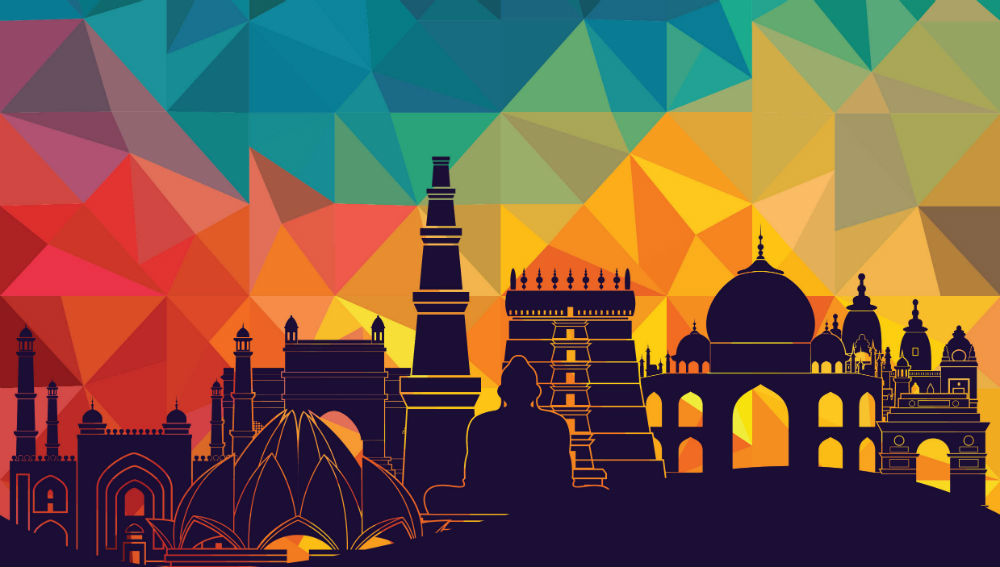 Google estimates that, by 2021, content consumption in Hindi will be more than consumption in English. The study has found that adoption of Internet through local languages has been led by services such as messaging (169 Mn), digital entertainment (167 Mn), social media (115 Mn) and digital news (106 Mn). Messaging will further grow to 396 Mn, digital entertainment to 392 Mn, social media to 301 Mn, and digital news to 284 Mn, respectively by 2021. 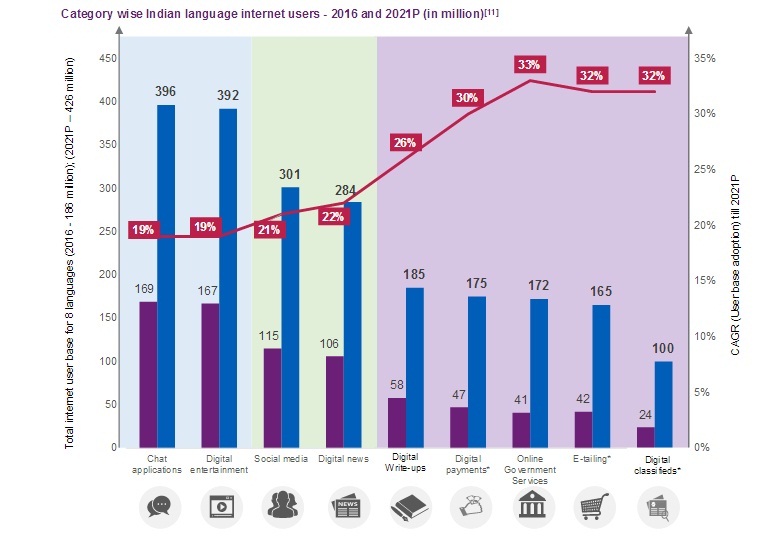 As per a TOI report, Rajan Anandan, VP for Google’s India and Southeast Asian operations stated, “English is over. There are only 200 Mn Indians who are proficient in English and they are already on the Internet. Almost every new user that is coming online – roughly nine out of ten — are not proficient in English. So, it is fair to say that almost all the growth of usage is coming from non-English users.”

It is easy to guess that affordable data, especially the launch of Reliance Jio, has been a major boost behind this rapid pace of Internet adoption by people speaking all sorts of vernacular languages. Jio’s entry also forced other telecom companies to drop tariffs, further boosting this growth. Add to that, the falling prices of smartphones, rising disposable incomes, improving digital literacy in rural India, and increasing language support and content across the Indian Internet ecosystem and one can see how adoption has shot up in the last year. 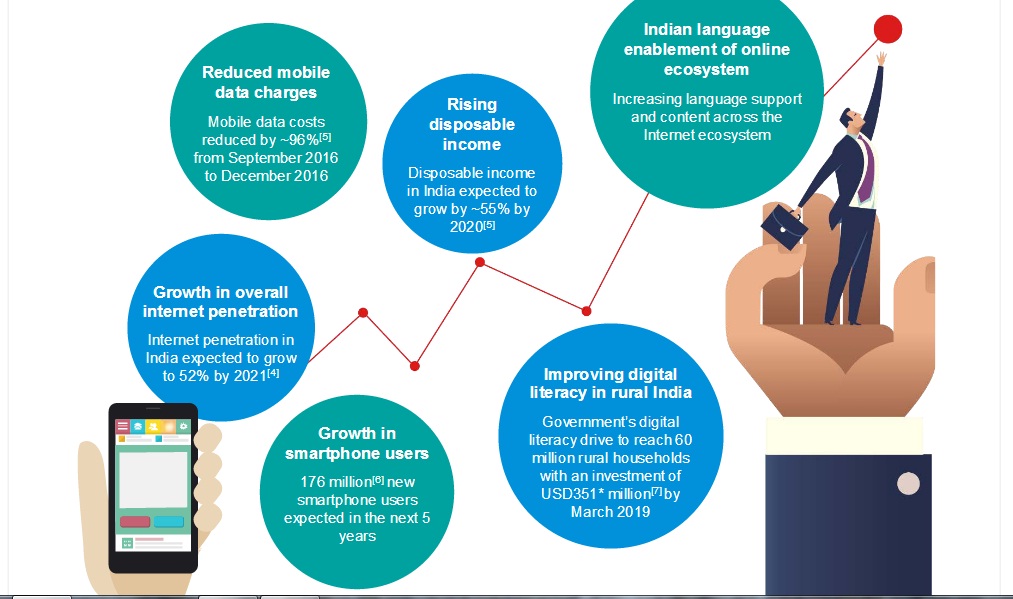 As per the study, adoption of Internet is highest among local languages such as Tamil, Hindi, Kannada, Bengali, Marathi, Telugu, Gujarati and Malayalam. It estimates that Marathi, Bengali, Tamil, and Telugu will form 30% of the total local-language user base in the country. Currently, Tamil at 42% has the highest Internet adoption levels, followed by Hindi at 39% and Kannada at 37%. 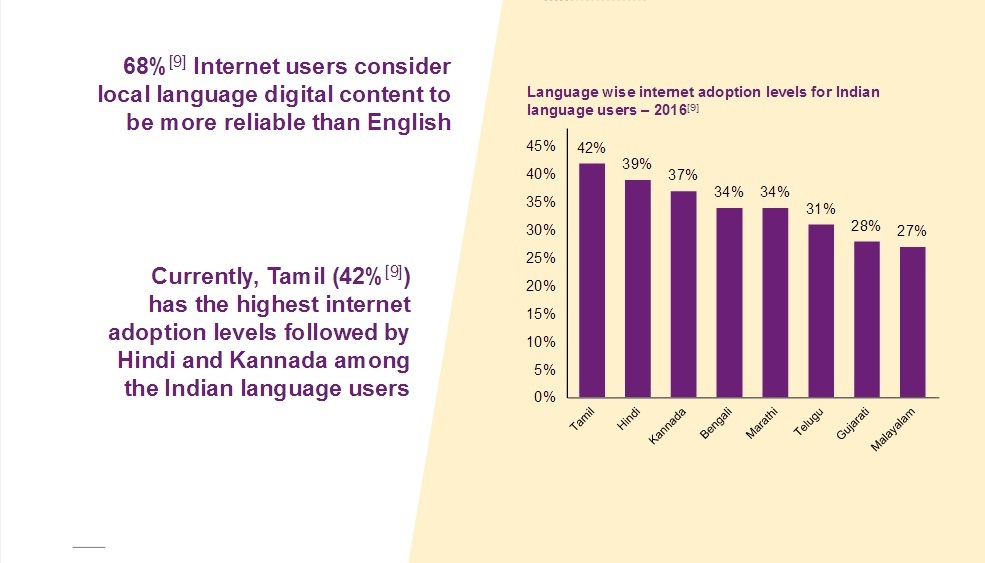 Language wise, Tamil and Kannada have a higher adoption propensity standing at 74%, while Hindi stands at 54%. 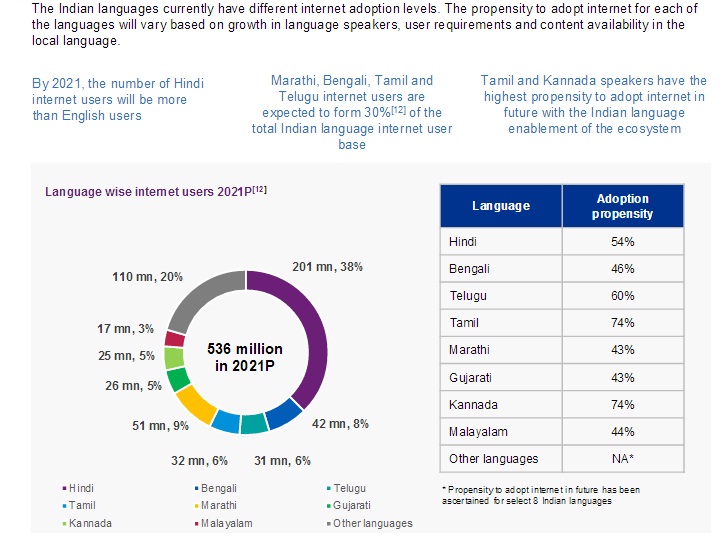 Also, 88% of Indian language Internet users are more likely to respond to a digital advertisement in their vernacular language as compared to English.

As a result of this growth in the vernacular language Internet base, obvious benefits will flow to sectors like ecommerce, payments, and others.

For instance, etailing, which is currently accessed by 42 Mn Indian language Internet users is expected to grow at a CAGR of 32% to reach 165 Mn users by 2021. 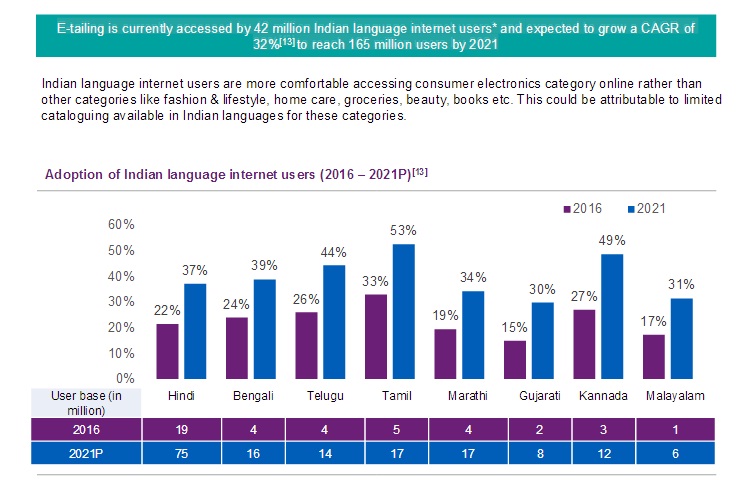 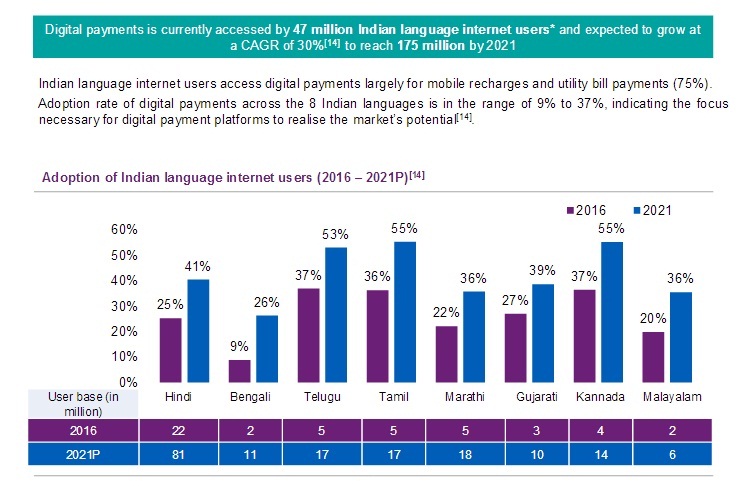 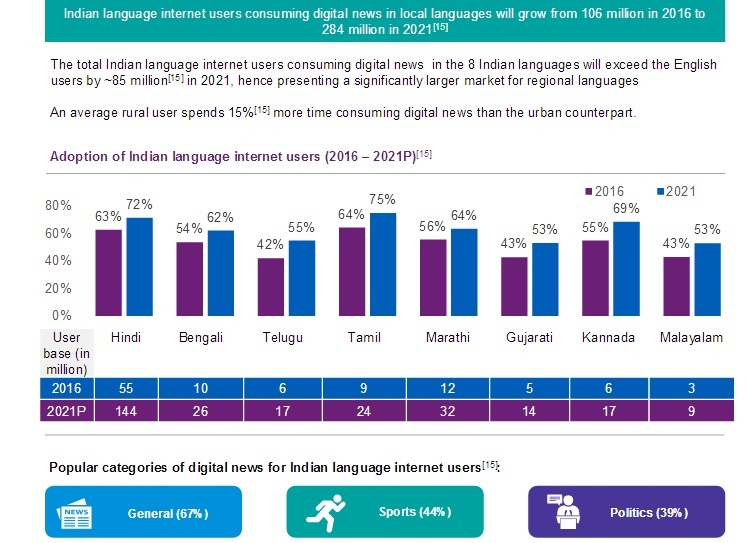 Meanwhile, the Indian language user base for digital classifieds will grow to 100 Mn by 2021. 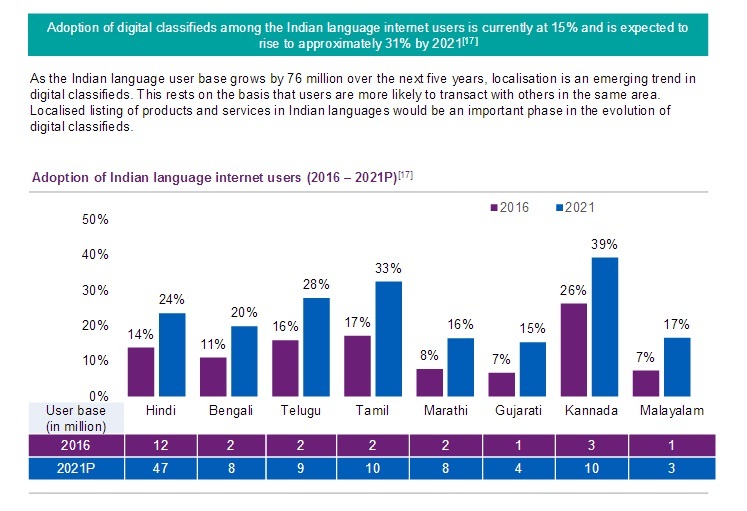 Not to be left behind, online government services too will add 131 Mn Indian language users by 2021. 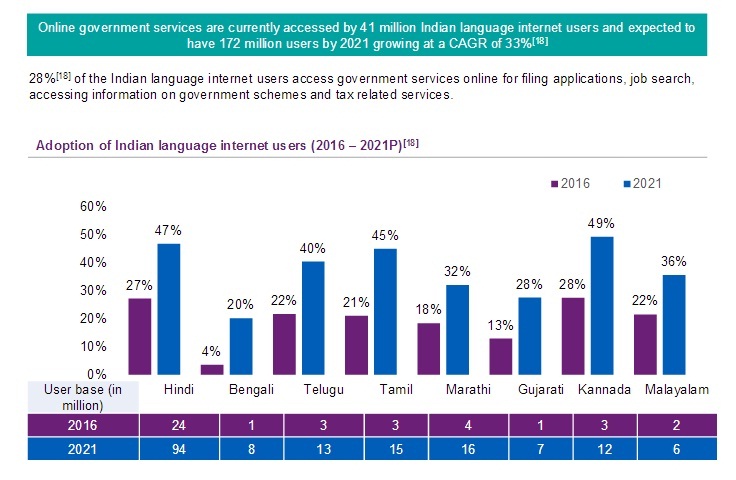 Entertainment is another sector which will get a massive boost. The Indian language digital entertainment user base will reach 392 Mn by 2021. 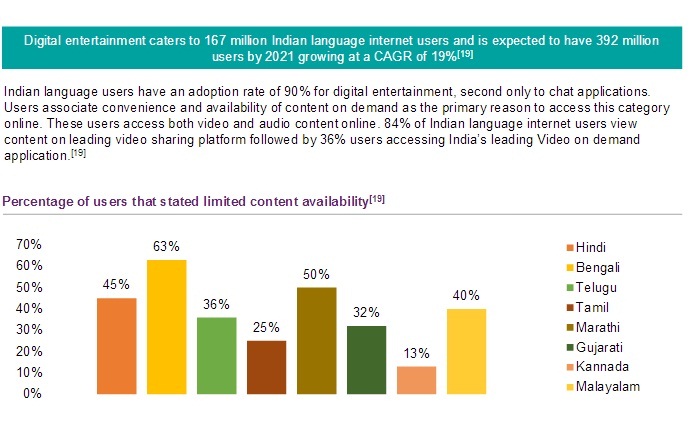 Lastly, chat and social media platforms will also see a massive effect. Chat applications cater to 170 Mn Indian language Internet users. This number is expected to grow to 400 Mn by 2021 at a CAGR of 19%. Similarly, social media platforms who have 115 Mn Indian language Internet users, as of now, are expected to increase to ~ 300 Mn in the next four years. 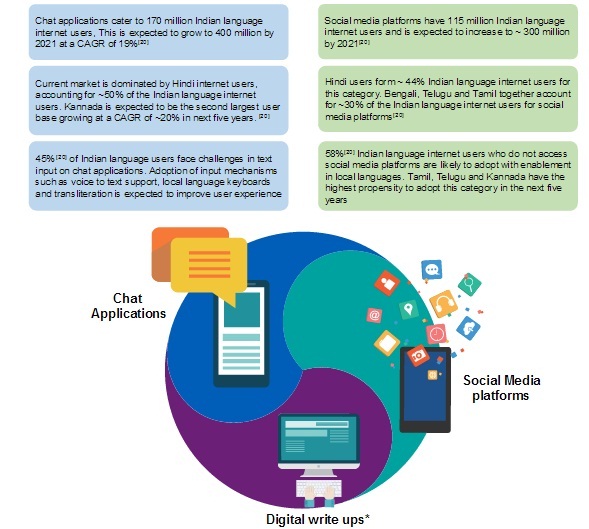 All in all, desi looks to be in a position to ‘trump’ videsi. No wonder, at the second edition of its signature Google for India event last year, Google had announced five new products that are tailored for expanding access to the Internet for Indian users.

But the challenge remains of creating enough content and ensuring native brand engagement to cater to the vernacular language Internet user base. Herein, lies the opportunity for startups and corporates alike – going local seems like the thing to do, as opposed to ‘glocal.’