With Pandemic’s Impact on Economy Waning, Indian Startups Back To Hiring Ways

With Pandemic’s Impact on Economy Waning, Indian Startups Back To Hiring Ways

According to Kaushik Banerjee, VP and business head at TeamLease, edtech startups such as BYJU’S, Vedantu, UpGrad and Unacadem have been on a hiring spree in the last couple of months

Banerjee says that edtech and fintech startups, which performed well amid the pandemic, are leading the hiring for India’s startup economy post the Covid-19 lockdown

Pravin Agarwala, CEO of BetterPlace says that hiring for blue-collar workers has also picked up, registering a more than 100% QoQ growth in the third quarter, with logistics sector leading the demand 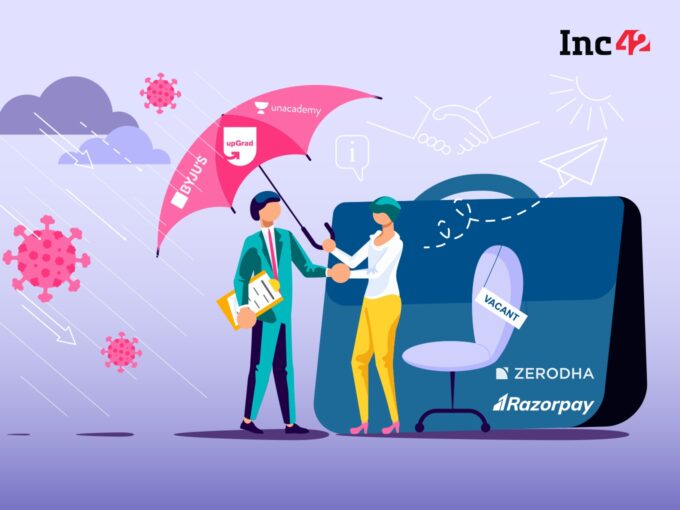 That six Indian startups have entered the unicorn club (valuation of $1 Bn) in a year when the Covid-19 pandemic has ravaged most businesses and the economy at large is no fluke. After all, for many of these freshly minted unicorns, such as Unacademy, Zerodha and Razorpay, all tech startups, the nature of their businesses — edtech for Unacademy; fintech for Zerodha and RazorPay — meant that they benefited from people staying indoors for a prolonged period.

Naturally, nascent startups with technological know-how, engaged in the edtech and fintech sectors had the leeway to have ramped up hiring in the last couple of months, even as joblessness continued to rear its ugly head in an economy whose GDP (gross domestic product) declined by 23.9% in the first quarter of the current fiscal year.

“Since the last one and a half months, startups such as BYJU’S, UpGrad, Vedantu, Unacademy and RazorPay have been on a rampage when it came to hiring engineers and business development executives. In the last week of October, I could see 700 jobs being posted daily, both blue-collar and white-collar, on my two portals along with LinkedIn. Of these, roughly 60% were from startups,” says Kaushik Banerjee, vice president and business head for TeamLease Services Ltd, a staffing and recruiting company which runs two portals, teamlease.com for aiding companies in hiring blue-collar employees, and freshersworld.com, which hosts entry-level white-collar jobs across various functions.

“These startups have raised a lot of funding, are seeing an uptick in user growth and can spend heavily on acquiring talent in a tough time,” he adds.

It is worth noting that layoffs and furloughs had become commonplace for Indian startups during the months of the hard lockdown, from April to May, when all business activity for startups engaged in the ecommerce, logistics and hospitality sectors had come to a halt.

As of October, that deplorable scenario seemed to have improved, with many startups opting for ESOPs (employee stock ownership plan) and buybacks of the same to reward their employees for sticking by in a tough time.

“30% of the total jobs posted on my platform at any given time are from startups. From April-May, this percentage had fallen to around 5-8%. As of September, the number was back to around 30%. By the end of the third quarter of the current fiscal, 40% of all jobs on my portal would come from startups engaged in ecommerce, edtech, fintech and logistics,” adds Banerjee.

Even as the Indian startup economy is likely to witness at least 11% shortfall in funding compared to last year, edtech and fintech sectors have been the “green shoots” since April.

The Indian edtech sector, besides witnessing an uptick in key metrics, saw a wave of mergers and acquisitions this year, the largest of which was BYJU’s acquiring WhiteHatJr for $300 Mn. As for fintech, the growth of digital payments on the UPI (unified payments interface) network since April has been unprecedented.

Last month, UPI payments breached the 2 Bn monthly transactions mark for the first time since the payments interface was launched in 2016.

Both sectors have also brought in the most amount of funding for Indian startups in the first half of 2020. Fintech has been the best performing sector in terms of funding deals for startups, with $543 Mn raised from 62 deals. It is followed by edtech with $452 Mn from 44 deals.

Banerjee adds that while job postings on his two platforms have increased in recent times compared to the numbers in April-May, they are still 5-8% behind pre-Covid levels. However, he expects that by year-end, there’d be a complete recovery in terms of job listings.

With the lockdown restrictions having largely been lifted, Indian startups engaged in the ecommerce and logistics sectors have also ramped up hiring, but for blue-collar workers who function as their hands for on-ground deliveries and supply chain support.

Hiring For Workers In Logistics Up 3x QoQ

Pravin Agarwala, cofounder and CEO for BetterPlace Safety Solutions, an India blue-collar lifecycle management startup, tells Inc42 that while the reverse migration of migrant workers to rural India amid the lockdown had brought about chaos and disruption for most businesses, of late, workers have returned to the cities and are actively seeking work.

“Since April, we have on-boarded 1.06 Cr workers on our platform. Most have returned to the cities to earn a livelihood while others are going to. It is an ongoing process but the hiring has certainly gone up since September, as ecommerce companies are scaling up their operations gradually to attain pre-Covid levels,” says Agarwala.

BetterPlace’s clients include companies such as Flipkart, Amazon, Ola, Dunzo and Swiggy, among others.

“From August to October, the hiring has grown by at least 70-80% when compared to May-July. Quarter-on-quarter (QoQ) growth is more than a hundred percent. For logistics, the year-on-year (YoY) growth in October this year is 115-120%. QoQ, hiring has increased 3x,” explains Agarwala.

Among the functions for which blue-collar employees are being hired, Agarwala says that as offices are opening up, demand for office boys and security staff has gone up.

Banerjee also adds that while demand for food delivery boys continues to stay strong through his portal TeamLease, online pharmacies such as PharmEasy and Medica are also hiring workers for fulfilling deliveries. A similar spurt in demand for blue-collar workers was witnessed by Banerjee in the retail space as well.

“In October, Spencer’s retail chain was looking to hire 3,000 workers in a period of seven days for packing and loading products. A similar demand was witnessed for ecommerce companies during the October festive season,” he says.

While blue-collar hirings picking up augurs well for India’s gig economy, concerns about their work conditions remain. Since September, delivery workers of Indian foodtech unicorn Swiggy have held intermittent strikes in Chennai, Hyderabad and Noida to protest against a reduction in their wages and the removal of monthly incentives. While the company claims that the wages are at par with industry standards, the workers allege that their minimum payout per order has fallen from INR 35 to INR 15 per order.

However, Agarwala of BetterPlace says that the protests have been more about a reduction in income (not wages), due to decreased orders coming through Swiggy. He adds that food delivery startups are mindful of the workers’ concern and are providing them with free food, stay facility with regular sanitisation protocols, health and accident insurance and other such benefits.

Nevertheless, the extent of the damage caused by the Covid-19 pandemic on the Indian startup economy is apparent. It has already left millions of people jobless and created a liquidity crisis in many places. Covid-19 has manifestly altered the market and how its players perceive their role and business’ performance.

For instance, once-lauded metrics such as gross revenue and total addressable market have been usurped by sustainability-focused goals like EBITDA and economies of scale.

An Inc42 report from July revealed that this year could see several Indian startups in the consumer internet space, in sectors such as travel and tourism, and entertainment and merchandising, go for down-rounds — when the company’s valuation is lower than in a previous financing round.