Some delivery partners have alleged physical threats, intimidation and abuses from their fellow workers who are following the strike call 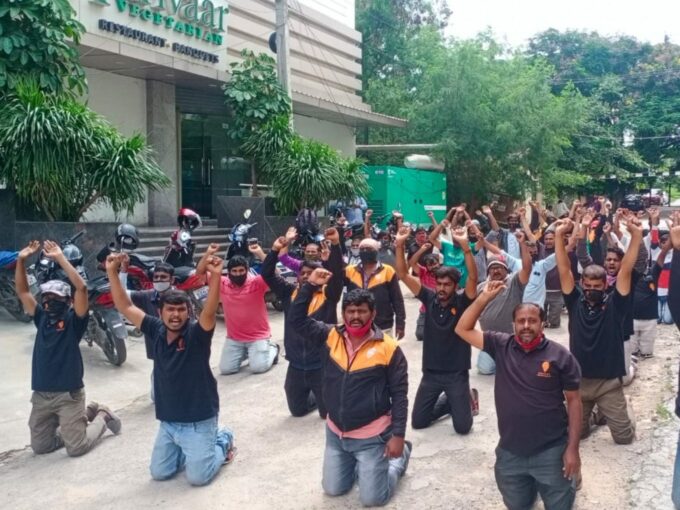 The ongoing standoff between Indian foodtech unicorn Swiggy and its delivery workers in Hyderabad seems to have taken a violent turn. And in the line of fire are delivery executives trying to make a living.

As some of the company’s delivery workers strike against a cut in wages, others choose to work due to a financial crunch at their homes. Now it seems that both the groups of delivery workers have clashed on multiple occasions.

To offer some context, since September 15, an estimated 3,500 Swiggy delivery executives have been on strike in Hyderabad as they protest against the reduction in the minimum payout per order from INR 35 to INR 15, and the removal of monthly incentives of up to INR 5,000.

A couple of days after the Hyderabad strike began, Swiggy delivery workers in Noida launched a protest over similar demands, namely restoration of the food delivery startup’s earlier wage structure for delivery executives, which guaranteed a minimum payout of INR 35 per order, INR 20 per batched order (when the worker makes more than one delivery in a single trip), and compensation for making deliveries while it rains or during the night and for the delivery worker’s waiting time at restaurants. 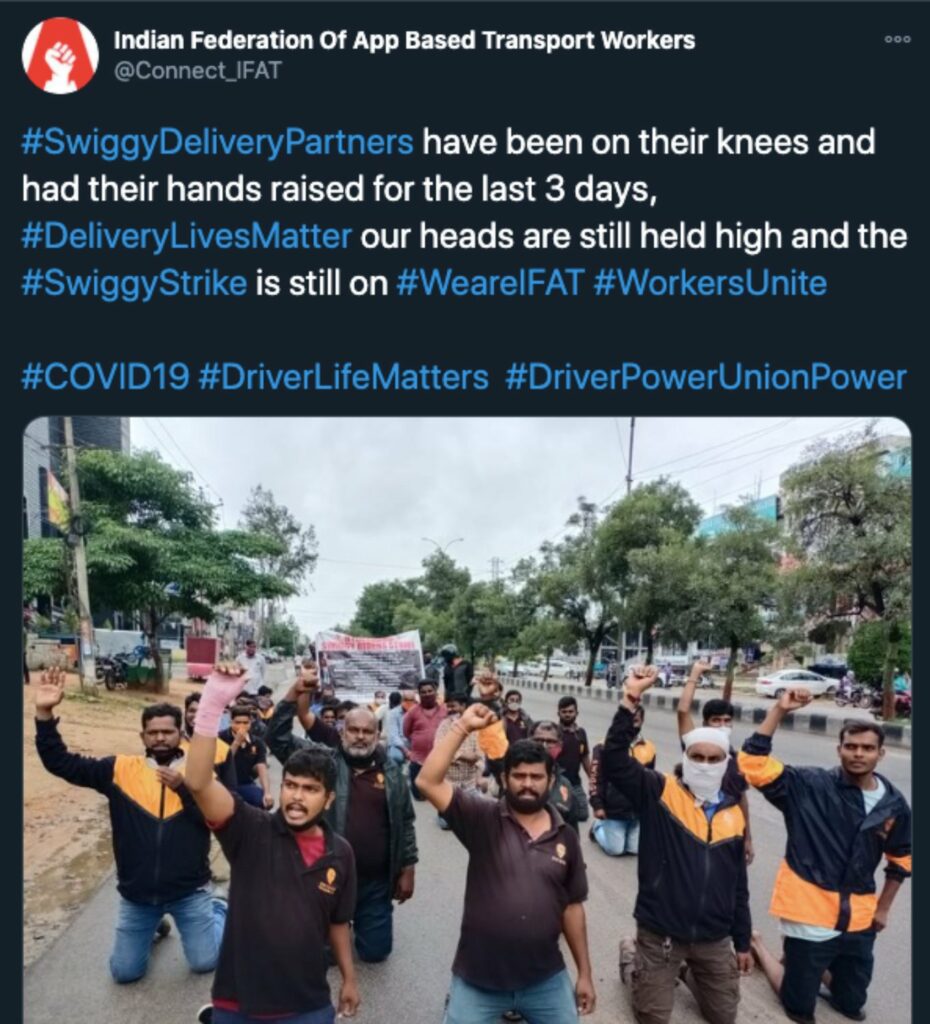 The workers’ protest in Noida, led by the All India Gig Workers Union (AIGWU), was stalled on September 22 after the workers had presented a memorandum listing their demands to the city’s Labour Commissioner.

In Hyderabad too, last month, the delivery workers through their local representative lodged a complaint against Swiggy with R Chandrashekaram, Joint Commissioner of Labour, Ranga Reddy Zone, Hyderabad. The last meeting in relation to the workers’ complaint was on October 6. However, the meetings have yielded no tangible results.

Shaik Salauddin, the national general secretary of the Indian Federation of App-based Transport Workers (IFAT) — the body that organised the workers’ protest in Hyderabad — expressed his dissatisfaction with Swiggy’s representation during the meetings with the labour commissioner.

“Their representatives aren’t ready to yield to any of our demands. There has to be some wiggle room from their end too so that we can arrive at a mutually agreeable point,” he said.

He said that workers’ protests had been stalled when the meetings with the commissioner were happening. “We will resume our protests since the meetings haven’t proved fruitful,” Salauddin announced.

Delivery Workers Clash Amongst Themselves

Hyderabad-based workers who deliver orders for Swiggy reached out to Inc42 and talked about their food parcels being snatched, their phones being smashed and their two-wheelers being punctured by their fellow workers who were choosing to sit out of work and participating in protest demonstrations as part of the indefinite strike launched by IFAT.

A worker, on the condition of anonymity, added that the demands made by those who were on strike were justified, as the minimum payout per order for Swiggy’s delivery workers had fallen drastically in recent times.

“I support the strike and hope that the company listens to our demands. We are not even getting our monthly incentives of up to INR 5,000 now. However, I’m the only earning member in my family and these are tough times, I can’t afford to strike for days,” the worker added.

Inc42 also reviewed several videos of delivery workers who narrated their ordeals of being intimidated, threatened and pushed around by their fellow workers who were striking.

In one such video, a delivery worker talked about the deplorable situation, where amid the pandemic, his wages had fallen, leaving him vulnerable to a financial calamity. Hence, to participate in an indefinite strike was out of the question, he said.

The same sentiment has been echoed in videos made by other delivery executives.

When asked about the scuffles that had broken out between the protestors and those who had chosen to work, Salauddin said stray incidents of violence are common in any protest.

Salauddin went on to accuse Swiggy of blocking the IDs of workers who had chosen to speak to the media about their grievances.

However, a Swiggy spokesperson told Inc42 that the company had only blocked the IDs of those who were indulging in violence and preventing other workers from completing their deliveries.

“As any law-abiding company, we have a zero-tolerance policy for those indulging in unlawful and violent activities. Unfortunately, we had to suspend a handful of delivery partners who have repeatedly resorted to activities that have caused harm to life and property,” said Swiggy spokesperson.

The spokesperson also claimed that through dialogue with its delivery partners, Swiggy had been able to address their misgivings and “reach an amicable understanding on the strong earning potential we provide. As a result, more delivery partners are now choosing to deliver with Swiggy than they have in the last six months.”

The spokesperson added that Swiggy has served Hyderabad as per normal for close to two weeks now, thus suggesting that the strike has ended. It is worth noting that Swiggy also engages the delivery workers of other companies, such as B2B last-mile logistics company Shadowfax, and online bike taxi aggregator Rapido, for completing its food deliveries.

Last month, when Swiggy’s delivery workers launched their strike in Hyderabad, they had demanded a stoppage on assigning orders to workers of other companies, namely Shadowfax and Rapido, as this reduces their earning potential.

Protests by delivery workers against Swiggy have happened sporadically over two months now. In August, Swiggy’s delivery partners in Chennai went on strike to protest against low wages. A few days after the delivery workers had gone on strike in Chennai, Swiggy told NDTV that the company had had a positive dialogue with the protesting delivery partners and was back to serving the entire city of Chennai with its fleet of workers.

The next month, workers’ organisations launched a strike in Hyderabad and a protest in Noida, pressing for similar demands. 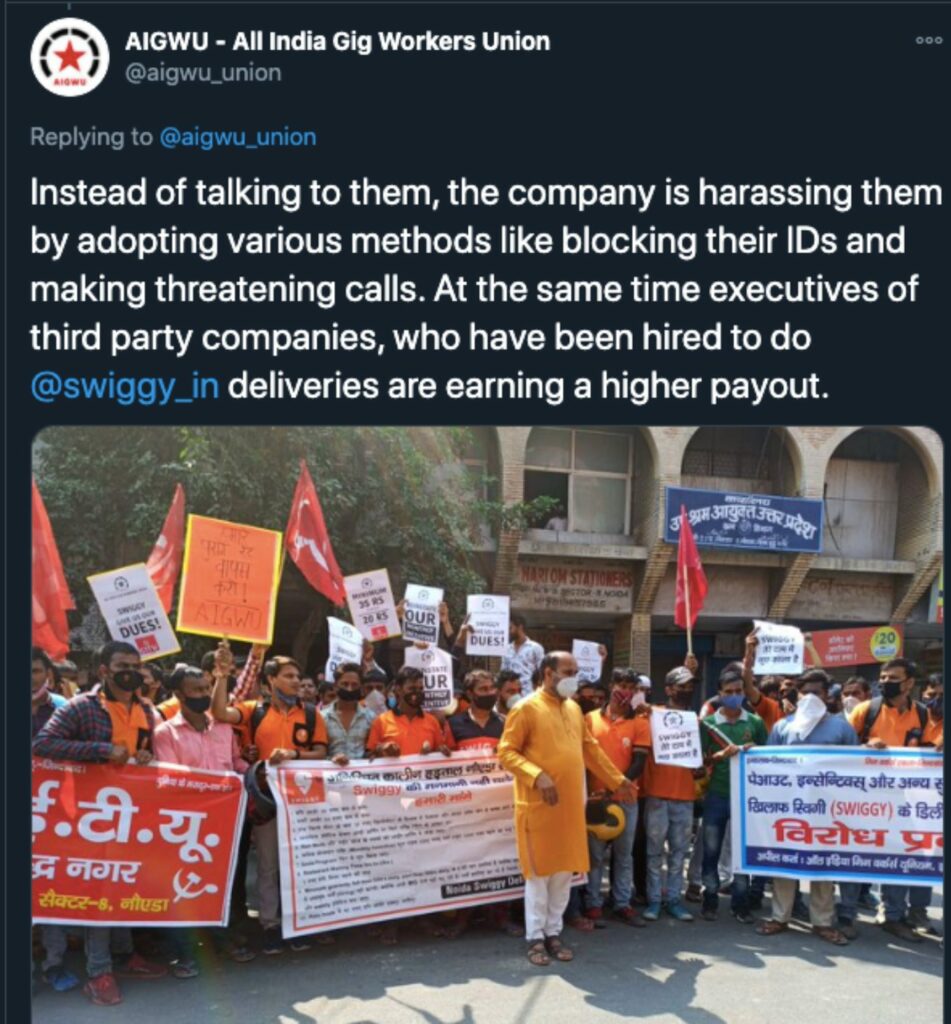 Swiggy’s response to its delivery workers’ protests in each of the three cities has largely been the same.

Last month, a Swiggy spokesperson told Inc42 that the amount of INR 15 was only one of the components of the service fee. The spokesperson added that most of the delivery partners in Hyderabad were earning more than INR 45 per order. Swiggy maintained that the per order payout was based on multiple factors, which included the distance travelled by the delivery partner, waiting time at the restaurant and time of shift completion.

The company claimed that its wage structure for its delivery partners was at par with industry standards.

As for the monthly incentives, the spokesperson told Inc42, “We found that our monthly incentives were benefiting a very small percentage of our delivery fleet. Therefore, we have actively reinvested that spend to ensure a higher daily incentive component for more delivery partners and made them easier to achieve at the same time.”

Nevertheless, a bunch of videos made by Swiggy’s delivery partners evidenced their distress.

The standoff between delivery workers and Swiggy may not be resolved by mutual agreement between both parties anytime soon. As detailed above, many of the company’s delivery partners may have continued to work but their dissatisfaction with the wage structure remains. Moreover, the strikes and protests by Swiggy’s delivery partners are indicative of some of the larger problems plaguing India’s gig economy.

With surveys showing that more than 90% of India’s gig workers witnessed a loss in their income amid the Covid-19 pandemic, it remains to be seen whether the Code on Social Security, 2020, can change things on the ground.