In the last four months, MedCords has witnessed 5x growth in terms of paid consultation and subscriptions, 25+ Lakh users, and has added 7K+ medical stores, compared to pre-Covid-19 times, where it had integrated only 300 stores

Local drug stores and pharmacies have played a prominent role in India’s healthcare ecosystem for decades. Even till this day, people in rural and semi-urban areas, who have limited access to healthcare facilities, rely on them as the next best alternatives or ‘aadha doctor’ (half a doctor).

With Covid-19 in the picture, a lot of these local pharmacies, that link doctors and patients in less developed regions are in dilemma and fear that e-pharmacy startups such as Netmeds, 1mg, Medlife and Pharmeasy will soon replace them, similar to what happened when ecommerce giants Amazon and Flipkart took on retailers, the repercussions of which are being felt today with the protests by vendors and sellers.

Coming to the rescue of such local pharmacy stores in rural and semi-urban areas is MedCords, a healthtech startup from a small town in Kota, Rajasthan, which is currently working on digitising local pharmacies across the country via localised, hyper-local delivery model.

Headquartered in Pune, MedCords was founded in 2017 by Nikhil Baheti, Saidanaik Dhanavath and Shreyans Mehta. The company started its journey with digitizing patient health records and providing doctor teleconsultation service to rural parts of the country. With its latest Sehat Sathi app, it looks to digitise local pharmacies in a matter of minutes (~5 minutes) and aims to eliminate the trust deficit that exists in the healthcare ecosystem. 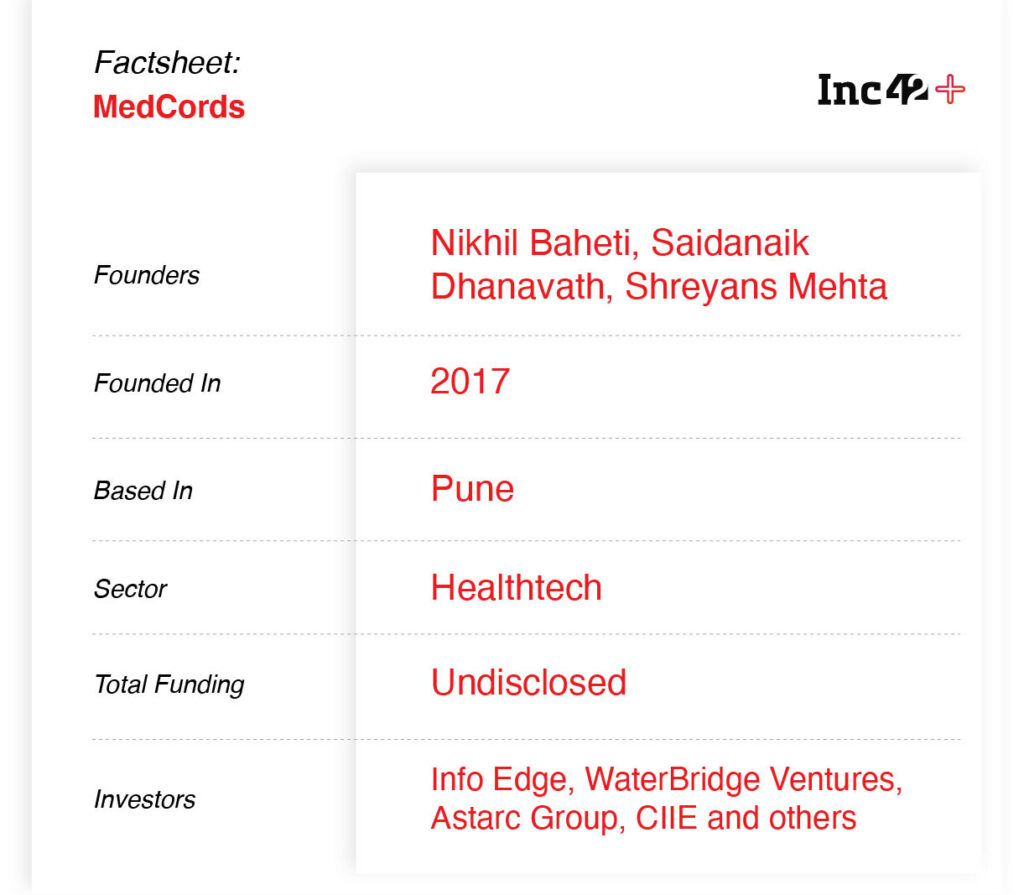 “During the Covid-19 lockdown phase, a lot of these e-pharmacies were semi-operational, and there was a shortage of delivery executives to deliver medicines to patients. At that point in time, we started analysing the situation and began developing a product [Sehat Sathi], where we onboarded physical medical stores and converted them into digital stores, where they themselves can deliver to nearby customers,” recalled cofounder Mehta.

MedCords believes that eliminating the fear of local pharmacies that epharmacies will take over and offer them some relief from the deep discounting and delivery pressure.

MedCords: Is The Future Of Retail Pharmacies Hyperlocal?

Prior to the launch of MedCords’ Sehat Sathi app, the company was operational in four districts of Rajasthan, including Kota, Bundi, Baran and Jhalawar. After the launch of its new hyperlocal app, MedCords has expanded to 13 states, including UP, Bihar, Jharkhand, Chhattisgarh (primarily Hindi speaking states), where it has more than 200-250 networks of retail pharmacies across each state. The company said that by leveraging these networks of medical stores, it has helped MedCords to get new users at a very less customer acquisition cost of INR 6 per user.

“For medical stores, the entire ecosystem opened, where users didn’t have to go anywhere else to buy medicines and can directly access nearby medical stores. For us, this completed the ecosystem, where patients record, doctor consultation along with medicines delivery all happening in a hyperlocal manner, in a way, optimised the entire operations to a whole new level,” added Mehta.

Further, sharing the growth metrics with Inc42, MedCords highlighted that the platform has completed close to 60K orders till date, and claimed to have grown organically, earning revenue up to INR 10 Lakh, in the span of three months of its app launch.

It has to be noted that MedCords presence in the urban, Tier 1 and metro cities is typically smaller compared to other online pharmacies and hyperlocal players like Dunzo, 1mg, Netmeds, PharEasy among others, which are catering to a larger set of audience.

“Often, patients in rural areas go to the city to buy medicine, and with our platform, they are not only getting their health records digitised and doctor teleconsultation for individuals and family at an affordable price, but we are also providing them the access to nearby medical stores on the go,” revealed Mehta, saying that building the trust factor is just as essential as delivery. 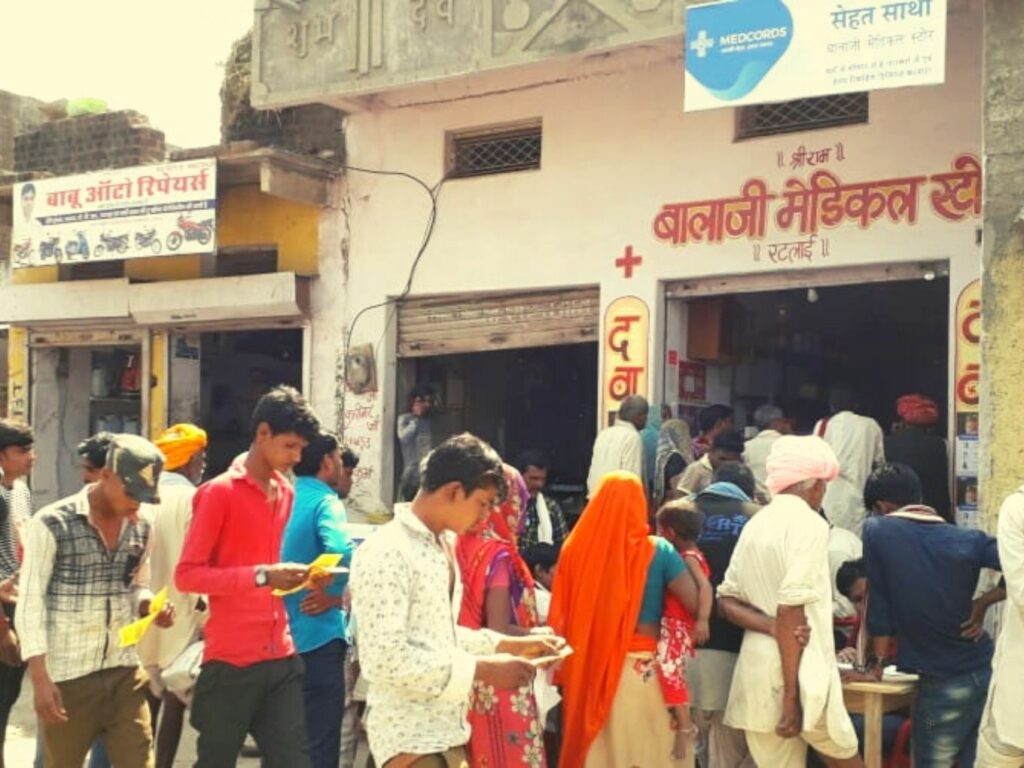 Backed by Info Edge and WaterBridge Ventures, MedCords claims to have digitised close to 2 Mn health records for 25+ Lakh users and has a network of 5K doctors for teleconsultations. Before the pandemic, it only had about 1000 doctors on its platform. Recently, the company has also raised an undisclosed amount of funding from Astarc Group, CIIE and other investors.

In terms of revenue generation, MedCords is not charging anything from pharmacies or doctors as it believes that these stakeholders need to earn more given the present-day situation, however, the company said that it earns its revenue from consumers and individuals directly via consultation fees and subscription plans.

In fact, in the last four months, MedCords said that it has witnessed 5x growth in terms of paid consultation and subscriptions, with 4x growth in terms of users. From 300 stores in pre-Covid times, it now has 7000+ stores. “Now, patients in rural India have realised the importance of digital healthcare service as it solves most of their queries, which otherwise would have taken five years easily.”

To further boost this growth, at a local level, MedCords will be adding more retail pharmacies and will be making them the brand ambassadors for the Sehat Sathi app. “When local pharmacies recommend our network of doctors to the patients and vice versa, it automatically builds trust in the entire ecosystem, and more and more people will start using our platform,” Mehta added.

“Today, there are benchmarks to reach urban audiences, but no benchmarks for rural audiences, where users are actually ready to spend on their health. Through this strategy, we will not only be generating more revenue, but also will be adding more subscription, teleconsultation,” said Mehta, commenting on its hyperlocal connected health model. In other words, the cofounder hinted that reaching out to more people in less time means more revenue.

Going forward, MedCords told Inc42 that it plans to have more than 5 Cr users, and digitise more than half a million medical stores by 2022. In terms of product development, the company said that it will be looking to automate prescription-writing, add video consultation services and also help pharmacies connect with local suppliers and newly-launched pharmaceutical products through the retailer-facing app.

“We are also developing a Uber-like model for doctors (doctor aggregator platform), where they can earn by consulting patients, on-demand and availability, and patients, on the other hand, will get to reach doctors with just a click of a button” concluded Mehta.