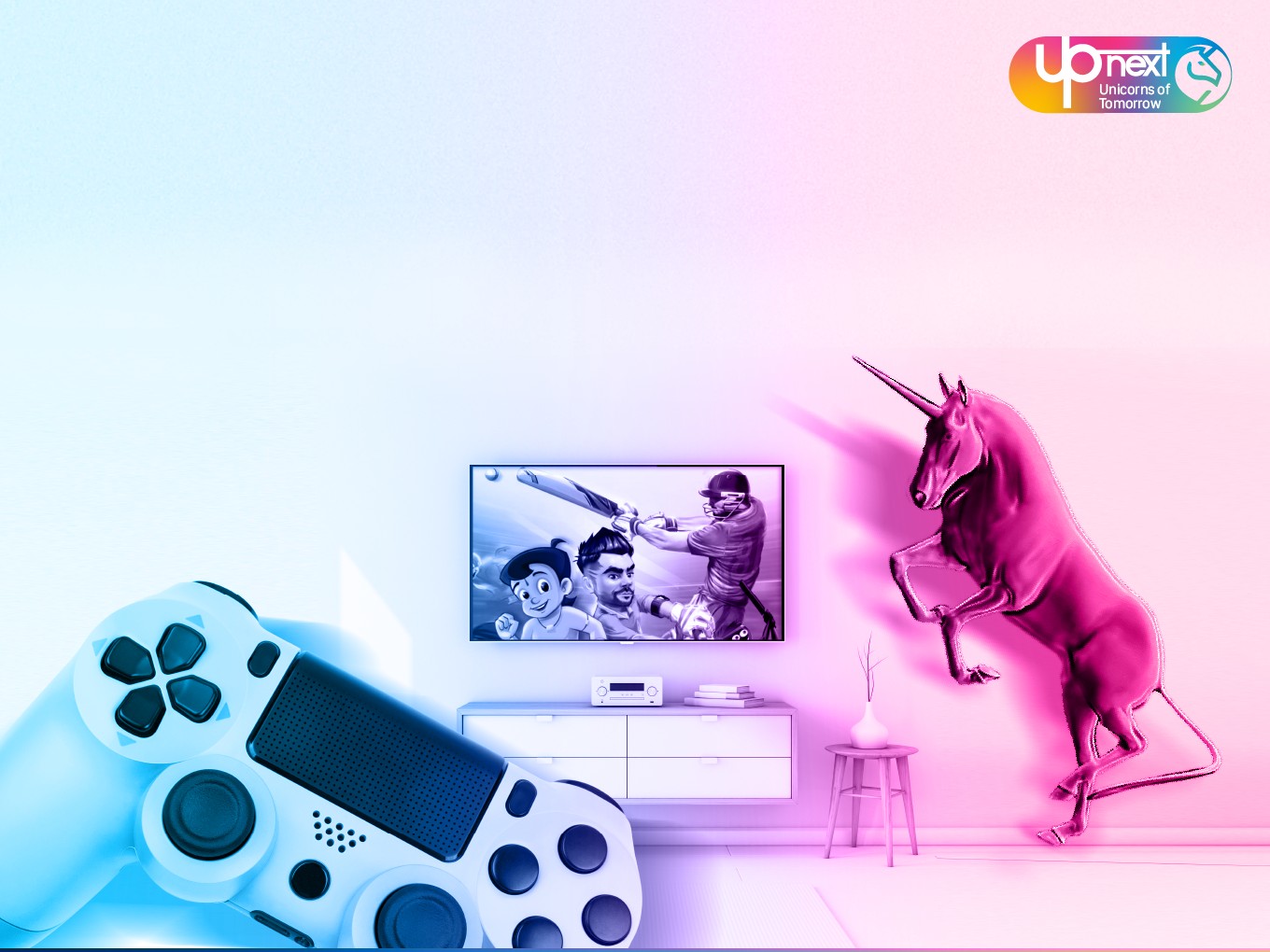 The online gaming industry in India is expected to generate a revenue of INR 11,900 Cr by 2023

To celebrate India’s rising startups, Inc42 is profiling a new soonicorn every Friday in the Inc42 UpNext: Unicorns Of Tomorrow series. For the next few months, we will be speaking to founders and cofounders at these potential unicorns and shining light on their journeys and growth stories. We begin the series with a look at gaming and sports media company Nazara.

As India’s GDP growth slips below 5%, onion prices cross the dreaded INR 100 per kg mark and automobile sector sales hit the lowest numbers in ten years — everything seems to have slowed down. With the exception of gaming.

Agarwal’s belief stems from the notion that when the economy is not doing well, one will tighten from fine dining to casual dining, and then from casual to homemade food. Now because one had to cut down on their frequency of going out, it creates a demand for accessible in-house entertainment and that’s where media and entertainment industry prospers.

Founded by Nitish Mittersain in 2000, Nazara is a global gaming and sports media company with a network of over 100 Mn players in India.

Over the last couple of years, the company has seen exponential growth like many other gaming startups, but there is speculation that Nazara is on track for an IPO. “I think our ability to work with founders and find these niches in gaming sector has been instrumental to our growth as a preeminent gaming giant in these emerging markets,” Agarwal told Inc42.

Over nearly two decades in the industry, Nazara has built a strong network of companies in interactive gaming and sports media through investments and acquisitions in various gaming categories including esports, fantasy sports, mobile cricket games and real money gaming among others.

Agarwal told us that while Nazara might be operating in various segments, these acquired teams continue to be focused on their target audience and industry; thus we are not digging ponds, we are digging wells. This collective acumen and knowledge aids the company to grow much faster.

In the last two years, Nazara claims to have made investments worth around $50 Mn in 13 companies, including in HalaPlay, Nodwin, Next Wave Multimedia, Hash Cube, Mastermind Sports, Moonglabs Technologies, Bakbuck, CrimzonCode, InstaSportz, NZWorld, HalaPlay, SportsKeeda, and  Paper Boat Apps.

Nazara is backed by marquee investors which include West Bridge Capital, IIFL Special Opportunities Fund; Rakesh Jhunjhunwala and Turtle Entertainment GmbH, the IP owner of the world’s largest esports franchise (ESL). With these backers and the content and IP, Nazara is looking to achieve the ecosystem affect.

Meet The ‘Friends Of Nazara’

“Over the past few years, we have been building a ‘friends of Nazara’ ecosystem, where we want to partner with companies and founders who are like-minded and share the same DNA in terms of how the business should be done and can have synergies with our existing investees,” cofounder Mittersain told Inc42.

Mittersain said that when Nazara acquires or invests in a company, it leaves a tangible part of the equity with the founder. Because the company does not believe in interfering in the operations of the investees, Nazara’s job is to operate as a platform and connect the dots.

According to the founder, post-acquisition these companies have seen notable growth in their revenues. Particularly, Nodwin which he claimed has grown its revenue by 300%. He added that these multiple investments also complement Nazara’s portfolio by enabling cross-networking and cross-selling opportunities as well as strategic partnerships for the ecosystem.

One example Mittersain gave is the possible synergy between Sportskeeda and HalaPlay, when it comes to engaging with cricket enthusiasts who are already interested in the sport and who are definitely Sportskeeda’s target audience.

“So we might introduce a Sportskeeda column in the Halaplay app for users to keep track of the game trends and scores — which would in turn also multiply the user base for Sportskeeda,” he added.

Getting India To Pay To Play

The online gaming industry in India is expected to generate a revenue of INR 11,900 Cr by 2023, growing at 22% CAGR, according to a report by consulting major KPMG and Indian Federation of Sports Gaming — industry’s self-regulatory body.

Despite this growth, Nazara’s Agarwal believes most gaming companies still don’t understand the grammar of retention, engagement and KPIs in gaming — because a lot of gaming startups are born out of pure joy of playing a game.

A game can be uploaded on Google Play Store or the App Store at no cost, but running a gaming company is the toughest business out there. The discovery of game, getting people to come back on the game, monetizing those users in India; these are all difficult tasks, he added.

In India users need a reason to pay and it is very unlikely that a user will pay for for unlocking new game levels or to get rid of the advertisements. With so many gaming options to choose from, users simply move to a new game or rather watch the advertisements instead of making the decision to pay.

“About 250 Mn Indian gamers are absolutely coming from instant gratification or stress bursting. They like one game but if you push them for paying they will uninstall and move on to the next game,” Agarwal added.

This is also related to core gaming audience in India, which is largely made up of middle-income users. These users do not have the disposable income for discretionary spending such as in-app purchases. There needs to be a big reward at the end. This is also the reason many real-money fantasy games have done well for Nazara, according to Agarwal, because players feel they can win a lot of money by putting in some money.

That being said, how does one tap into the value-conscious customer base of India? Agarwal thinks competitiveness or collaboration are the only two behaviours which will bring monetisation to gaming businesses in India. Describing the users, Agarwal told us, “When my ego gets hurt, then I pay for it, or if it’s a super huge gratification or collaboration happening and I feel nice — that’s only when I am going to pay.” He added that this is usually seen in real-time multiplayer games.

But for multiplayer gaming to achieve scale, a market needs to have massive addressable base. The Indian market is skewed towards single player gaming, he added.

Given, the growing internet adoption, better infrastructure and higher smartphone penetration —  the industry potential is huge. Reliance Jio recently announced its foray into the digital gaming space with Jio Fiber. The conglomerate’s gaming platform is expected to support both online multiplayer or social gaming. Jio Fiber users can play or compete with their friends, with multiplayer chat and video conferencing, just like on Microsoft’s Xbox or Sony PlayStation, Jio had said earlier.

Reliance has promised that the platform will provide zero latency gaming experience in 4K resolution, powered by its Jio Fiber broadband connection which is said to have speeds ranging from 100 Mbps to 1 Gbps, which range from INR 700 to INR 10K per month.

According to Agarwal, building the habit of paying in the market takes time — it might take five to seven years, but he was confident of it happening through strong multiplayer gaming experiences.

“One thing is for sure, the digital gaming market will keep growing and evolving in newer and newer ways. And we’ll all wonder if we are sitting smack in the middle of it, or if we have been left outside.”