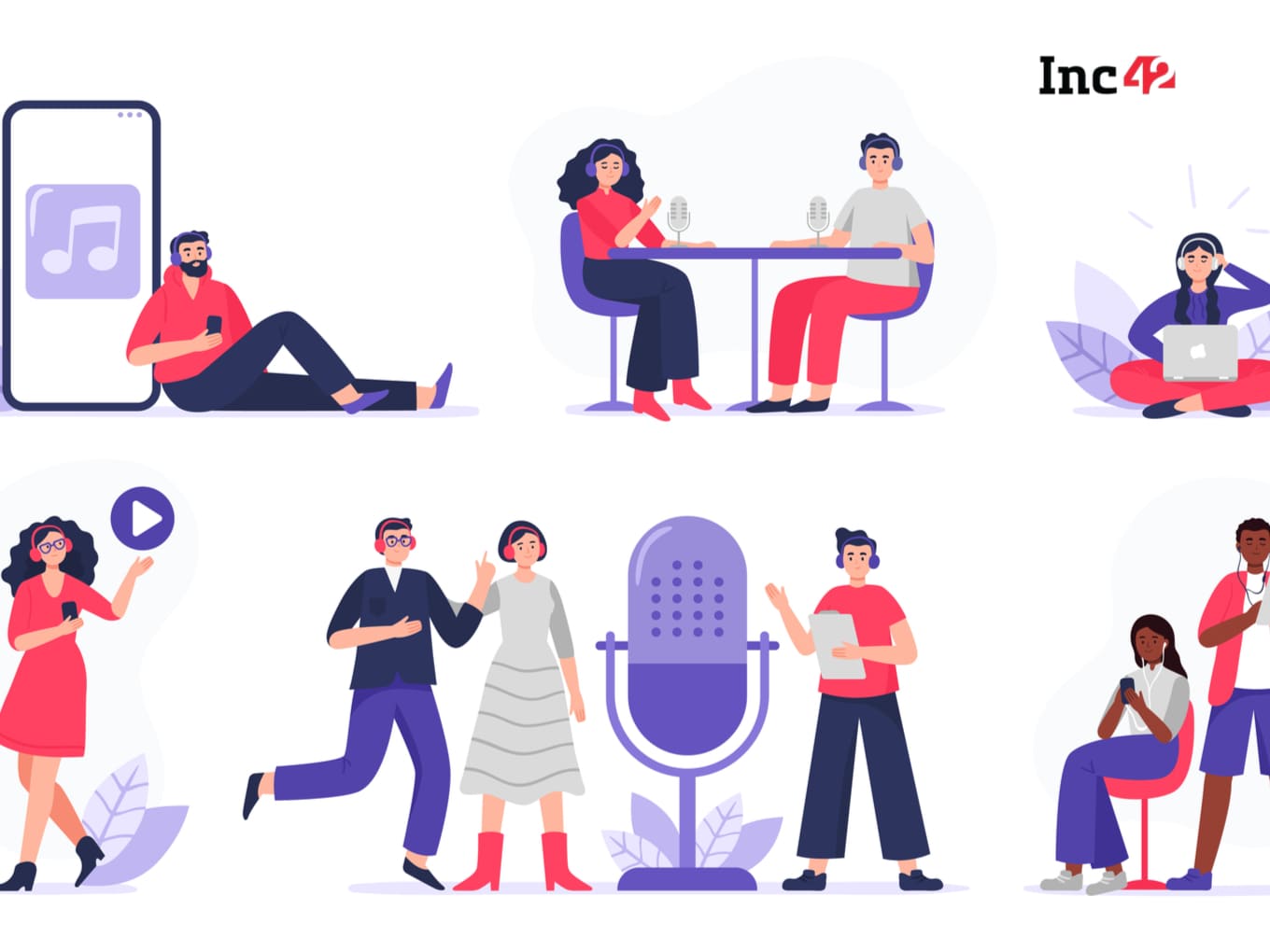 Inspired by the success of Clubhouse, everyone from startups to tech giants are entering the audio social media fray

With the massive hype around audio platform Clubhouse, which has taken the world by storm, it was just a matter of time before other app creators and tech platforms jumped on board just as the founders of the Indian social media platform Chingari did today. Sumit Ghosh and Aditya Kothari, today announced entry in the audio-only social media segment with the launch of a new app — Fireside.

Available on iOS and Android, the app has been launched as a separate business entity from Chingari and will be closing a funding round soon, said Sumit Ghosh, cofounder, fireside and Chingari. The app offers a common virtual location (room) with common shared topics or interests so that like-minded people can engage in conversations.

“To mirror the diversity of the country like ours, there needs to be an egalitarian social platform that is inclusive of folks who can barely read and write. With Fireside, even those who are minimally literate, can open their ideas up for the world to hear,” said Aditya Kothari, cofounder of Fireside and Chingari.

With open and closed rooms, the scale and significance of a particular discussion can be adapted as per the user needs, the company added.

In terms of its interface, Fireside has a passing similarity with Clubhouse. Fireside offers users options to enter rooms with languages like Hindi, Kannada, Tamil and Telugu apart from English. While it has just been launched, it is likely that the founders will cross-promote it to a 56 Mn Chingari user base to improve traction. 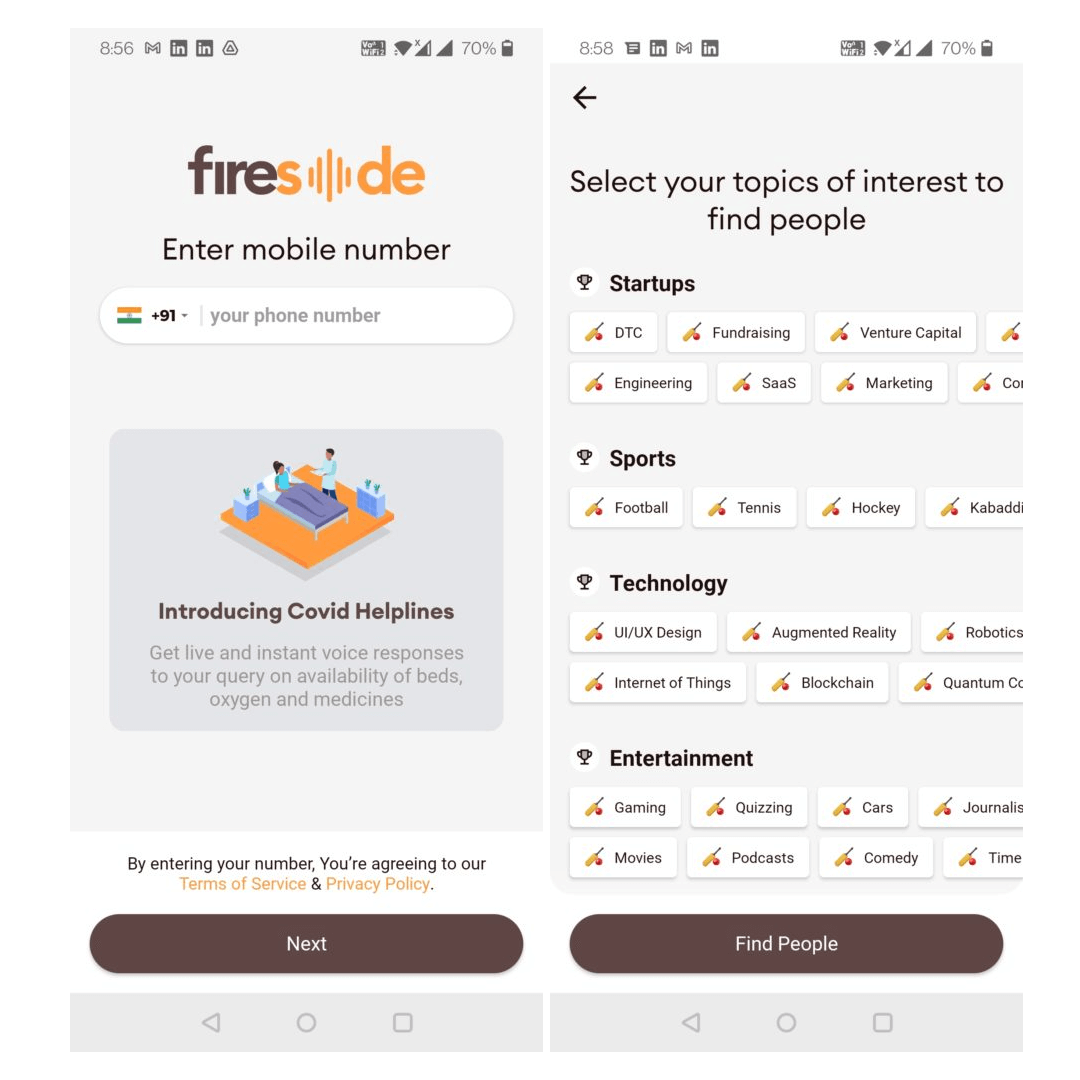 A few months ago, Bengaluru-based startup Leher staked its claim as India’s first invite-only, social networking platform for live discussions using the audio-video format. Unlike Clubhouse, Leher has video support, which does set it apart from the US-based app. However, Clubhouse has the massive advantage of having international influencers, startup founders and business leaders, which Leher cannot match. Founded in 2018, Leher was started by second-time entrepreneur Vikas Malpani (who earlier cofounded Commonfloor) and is backed by Orios Venture Partners. Last month, another audio-based social networking platform called Bakstage was launched in India by Flyx Entertainment, a Delhi and New York-based OTT platform.

But are these solutions ready to create the mass hysteria that Clubhouse has done, especially with it looking to bring in the Android version now?

Founded by Rohan Seth and Paul Davison, Clubhouse has been fast gaining global popularity despite being only available on iOS. In the context of India where Android holds a share of 95.77% (as of April 2021) of the mobile operating system market, the adoption of Clubhouse has remained limited with iOS holding only 2.97% market share. But since the company is now in the final stages of launching an Android app (which is under Beta testing phase at the moment), it’s expected to gain similar popularity amongst the Indian masses.

From Indian founders such as Unacademy’s Gaurav Munjal, Flock’s Bhavin Turakhia and leading venture capital investors to celebrities — India has seen people across the spectrum joining the voice brigade on Clubhouse from time to time. And with this limelight for audio-only interactions, Indian apps like Leher are also gaining a leg up with prominent personalities joining it.

However, one of the reasons for the hype around Clubhouse has been the fact that it is extremely difficult to gain entry on the platform which is based on exclusive invitations. This is also a reason that the app has often been called out for being “elitist” for only extending invitations to celebrities, influencers and top businessmen.

If Indian audio apps follow this model, it would defeat the whole purpose of offering a language-agnostic audio platform. In fact, Fireside and Chingari cofounder Ghosh said that with the urgent need to amplify SoS messages for Covid relief, the audio platform would be a perfect fit.

With tech giants Facebook, Microsoft’s LinkedIn, and Slack on their way to offer similar functionality, Spotify has recently entered the arena through the acquisition of startup Locker Room. So who will win the audio-only social media game?

In fact, even social media giant Twitter has recently ventured into this segment with Spaces which was launched for all users earlier this week (after it reportedly failed to buy Clubhouse). Spaces allow users (with 600 or more followers) to join virtual discussion rooms like its competitor.

The podcast industry has witnessed significant growth in India, with more than 40 startups operating in this space and catering to 200 Mn monthly active users (MAU). The lockdowns induced by Covid-19 further bolstered its growth and the segment saw the listenership rising by 30%, according to a KPMG report. Some popular content startups operating in this space are Tencent-backed Pratilipi (20 Mn MAU), Hindustan Times-Backed Hubhopper, Fosun RZ-backed Headfone, IVM Podcasts and Suno India, among others. Pratilipi acquired Mumbai-based IVM Podcasts last November.

Audio as a digital content medium has been present in India for over five years through podcasts, audiobook and storytelling platforms. But it did not witness the boom that the Chinese or US-based audio platforms have witnessed. Can audio-based communities and social media platforms take this medium to the next level of growth?