Is The Indian Podcast Market Ripe For Consolidation Like Its Global Peers?

Is The Indian Podcast Market Ripe For Consolidation Like Its Global Peers? 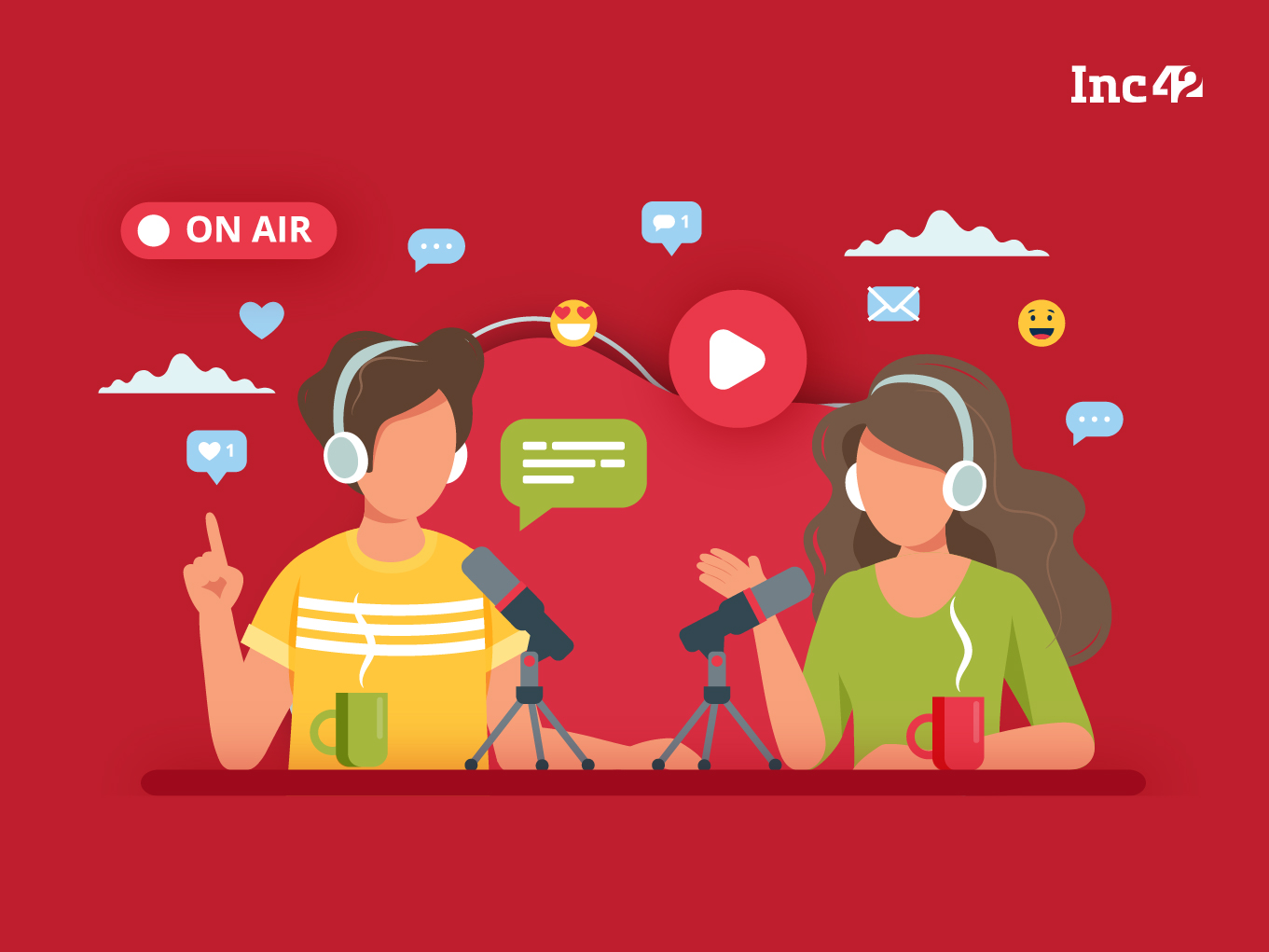 While 2020 witnessed a surge in the number of podcast listeners, 2021 will be the testing ground for Indian podcast platforms and the sustainability of their content

On Dec 30, 2020, retail and media giant Amazon said it was acquiring podcasting company Wondery to expand its original audio content catalogue. The company did not disclose the price although earlier reports from Bloomberg and The Wall Street Journal suggested that Wondery was valued at around $300 Mn.

The deal came at a time when global tech and media giants are trying to grab early-mover advantage in the podcast market. In India too, the podcast industry has witnessed significant growth, thanks to more than 40 startups operating in this space and catering to 200 Mn monthly active users (MAU). The lockdowns induced by Covid-19 further bolstered its growth and the segment saw the listenership rising by 30%, according to a KPMG report.

Wondery will be a part of Amazon’s music streaming business, Amazon Music, which is now competing with the likes of Apple Music and Spotify Technology. But both these companies are far ahead of Amazon in terms of reach and scale. As a podcast distribution platform, Apple leads the industry in the US, the largest podcast market globally. Last year, the tech giant acquired Scout FM, a podcasting startup that uses artificial intelligence (AI) to create automatically-curated podcast lists.

As of now, there are three main areas of operations which have seen the M&A heat. First, there are podcast-specific adtech platforms like Adswizz which help ensure optimum ad revenue generation. Next comes the creation-distribution of podcasts, done via podcast networks like Gimlet Media (similar to what production houses do), and their performances are measured in terms of listenership or subscriptions. Then there are distribution-only platforms like Google Podcast whose success depends on the number of downloads. However, the fine lines between these segments often get blurred.

Why Everyone Is Falling For  Podcasts

Podcast genres range from audiobooks and online story-reading to news, serials, talk shows and self-improvement lessons. But apart from the content variety, its growing global demand has been triggered by several other factors.

With the rise of over-the-top (OTT) content, businesses are looking for new formats to generate revenue beyond video and podcast is one of them. Then there are global giants like Google, Amazon, and Spotify seeking ways to monetise this format. Digital marketers are also building customised solutions to earn more from podcasts. While the initial draw for podcasts was premium quality content, celebrity podcasters like Kareena Kapoor and Kalki Koechlin have helped popularise the format further.

A 2019 report by Deloitte found that globally, podcasts could be a $3.3 Bn+ business by 2025. According to KPMG, India is the third-largest podcast-listening market globally and is expected to be valued at INR 17.62 Cr by 2023, growing at a CAGR of 34.5%. As the popularity of the new content format is growing at a fast clip, major music-streaming platforms, from Spotify to JioSaavn to Gaana and more, are adding podcasts to their offerings.

India’s podcast landscape comprises more than 40 multilingual podcast companies, including popular content startups such as Tencent-backed Pratilipi (20 Mn MAU), Fosun RZ-backed Headfone, IVM Podcasts and Suno India, among others. Most of them are operating across genres and still experimenting to find the right market positioning.

Platforms such as HubHopper (backed by Unit E Ventures), Vaaka Media, Kuku FM (funded by 3one4 Capital) and Y Combinator-backed Khabri (with 7 Mn MAU) also offer their users free, end-to-end platforms to create, filter, edit, distribute and monetise podcasts and other forms of digital audio content. As mentioned above, many of these players have raised funding from Indian and global investors even though they are still trying to figure out revenue models. In short, the market is expanding rapidly and people are betting big on it.

What Amazon Brings To The Podcast Market In India

According to a FICCI-EY report released last year, 47% of Indian internet users in the 16-64 age group listen to podcasts, 92% watch online videos and 82% stream music. So, the potential market for podcasts, OTT and streaming platforms is huge.

Jeff Bezos-led Amazon offers a variety of content in India, including Netflix rival Amazon Prime Video, Spotify-like Amazon Prime Music and an audiobook platform called Audible. According to a Redseer report, Amazon Prime (combined services, including ecommerce) has nearly 10 Mn users in India, out of a global audience of 150 Mn Interestingly, only 40% of Indian users pay for their Prime membership while others have opted for bundled subscriptions offered by telcos. However, almost 30% of Prime users come on board for its video content, the report says.

Both Netflix and Amazon Prime Video hold around 20% of the market share in India, but Amazon also launched a non-music audio platform called Audible Suno in 2019 that features original content presented by popular voices like Neelesh Mishra and Harsha Bhogle. It shows that Amazon has so far taken a measured but focussed approach towards podcast content, and it has a long-term plan.

Although metrics for the non-music audio segment are not available for India, the OTT Audience Measurement Insights has found that the Indian music streaming segment is led by Gaana (150 Mn MAU and 30% market share), followed by JioSaavan (24% market share) and Wynk (15%). Global music-streaming giants like Spotify (15%), Google Play Music (10%), Amazon Prime Music and YouTube Music are trailing the Indian players. All of these platforms offer non-music content as well.

But unlike music streaming, which is populated by platforms with a massive national digital reach and wealthy promoters, the podcast space is ruled by both global and regional players.

For instance, there is JioSaavn, the audio-streaming service owned by Mukesh Ambani’s Reliance Industries, that has seen its podcast catalogue grow from 25 to more than 100 podcasts since 2019. As of September 2020, more than 60% of JioSaavn users in the age group of 18-35 listened to this platform’s podcasts on a weekly basis. The company also launched a direct listing platform for podcast creators called JioSaavn YourCast in 2020.

Amazon’s acquisition of Wondery has been lauded by the stakeholders of the podcast ecosystem in India as a sign of Big Tech’s growing interest in this space.

Lal Chand Bisu, cofounder and CEO of the vernacular audio startup Kuku FM, says that the global interest in podcasting is apparent from Spotify’s increasing acquisition of podcast platforms. The trend is picking up in India as well. In November 2020, Mumbai-based podcast company IVM Podcasts was acquired by vernacular publishing platform Pratilipi. The deal marks the first-ever acquisition of Pratilipi and gives the Tencent-backed company a big growth push.

“The likes of IVM, Wondery, Gimlet and Anchor are high-quality audio content platforms, and Amazon has noted their demand. It is quite apparent that bigger players are trying to build a Netflix-like platform for long-form audio content,” says Bisu.

Set up in 2016, Wondery has produced some of the most popular English language podcasts, including true-crime series like Dirty John, Dr. Death and Over My Dead Body. In fact, Spotify is also exploring this genre in India with The Big Shots: Dosa King, an eight-part audio series featuring the life and legacy of South India’s most infamous restaurateur P. Rajagopal, founder of the Saravana Bhavan chain of hotels. The series was launched after Khooni: The Crimes of India that became popular on the platform.

Going forward, Bisu expects similar Big Tech interest in Indian podcasting platforms if they can create ‘viral’ content. “Quality content already exists, but presenting and owning it as a brand will determine the growth of the vernacular audio,” he adds.

Understandably, there is a scope for M&As in the Indian podcast space, given their specialisation across vernacular content. Gautam Raj Anand, the CEO and founder of Hubhopper, a podcast distribution and hosting platform, says that content companies increasingly see the need to offer a multitude of solutions. “While podcast, music and audiobook listeners access the audio content in a similar fashion, the technology and business model that go into them are very different. So, it makes sense for content platforms to acquire target companies instead of building solutions from the ground up,” he adds.

While 2020 witnessed a surge in the number of podcast listeners, 2021 will be the testing ground for these platforms and the sustainability of their content as they seek subscriptions and renewals, say experts.

Jehil Thakkar, partner at Deloitte India, notes that non-music content is increasingly seen as a differentiator by streaming services. As consumers increasingly sample and eventually use (pay for) non-music content, one expects podcasting and other non-music audio content companies to become more attractive to industry majors for their talent rosters, content and capabilities.

“A market like India is not yet mature in terms of scaled capability or talent. But the future is promising with several companies operating in this space and new talent coming up. India will also have an additional layer of growth when regional markets will mature,” says Thakkar.

One thing is for sure. The podcast market will unravel in exciting ways as India’s 700 Mn-strong internet user base grows and matures.