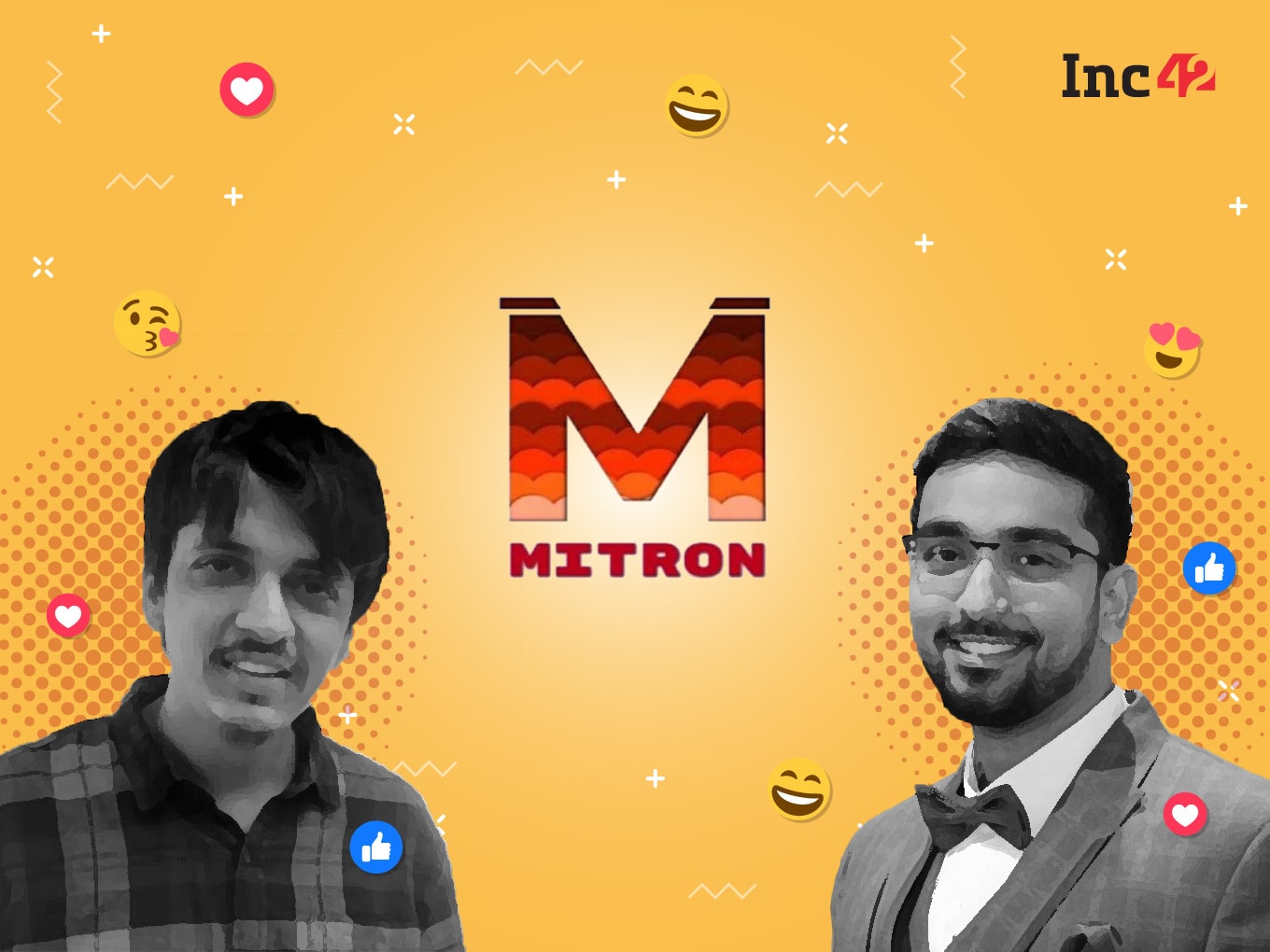 Mitron’s launch turned political after the Indian app’s source code turned out to be created in Pakistan, but founders say there were unaware of the origins

In early-June, Google Play Store banned Mitron app for technical policy violations of a UGC app, however, the company’s investors helped it get back within 2-3 days

Mitron signed a term sheet for funding in June, but since the company was yet to be registered, the deal was finalised only in July

In early June, short video app Mitron was banned from the Google Play Store for a certain developer policy violation. The ban would have killed most young apps — even ones with over 5 Mn downloads in a month. In the fast-paced world of apps, and particularly in India, a ban from the Play Store is as good as a death knell.

But Mitron was back on the Play Store in under a week. The Play Store had banned Mitron for technical policy violations. Mitron cofounder Shivank Agarwal told Inc42 that not having a website or privacy policy proved to be a problem, as these are essential for a user-generated content app as per Google. “It took us 2-3 days to fulfill the requirements and get back on Google. Our investors’ support with the right connections helped us reduce this timeline. Ideally, this takes a week or so, but our investors helped us get back within 2-3 days,” Agarwal said.

After surviving a social media storm over the origin of its source code being from Pakistan, the ban by Google and the massive marketing muscle of TikTok, Mitron was somehow staying alive. And then the government banned 59 Chinese apps, including TikTok and other short video platforms, on June 29, 2020. In just a month, Mitron’s fortunes had turned for the better.

Launched in April 2020 with the idea of being Indian social media rival to TikTok, Mitron is the brainchild of Shivank Agarwal and Anish Khandelwal. It began as a side project while the two were pursuing full-time jobs. The duo wanted to build a social media app, at the time when TikTok was under fire for a series of disturbing videos, including a comedy sketch on acid attacks.

Initially, the idea was to buy a ready prototype and iterate on it based on user feedback. So they chose to buy the base source code for such an app and further build on it. In Android and iOS development, buying an app’s source code, customising it and then monetising it through ads is not a new concept by any stretch. In fact there are legitimate marketplaces for this. But perhaps, the duo should have paid closer attention to the original developer.

The Mitron source code was purchased from Envato’s CodeCanyon, a marketplace with a huge repository of app codes. However, soon after the blitz launch— 550K downloads in 72 hours— reports surfaced that the app has been purchased from Pakistan-based Qxobus for just $34 (INR 2600). Qboxus founder and chief executive Irfan Sheikh said that its customers are expected to use the code and build something on their own.

However, cofounder Agarwal said that the company wasn’t aware at the time of purchase that the seller was from Pakistan and told us, “If we were aware, we wouldn’t have bought it.” Further code and features were added by the founders and the Mitron team, who also fixed the security bugs.

But some of the damage was already done. Many had noted the irony of Mitron rising on the Make In India wave but having purchased the base of the app from Pakistan, the most immediate rival for India, politically speaking. 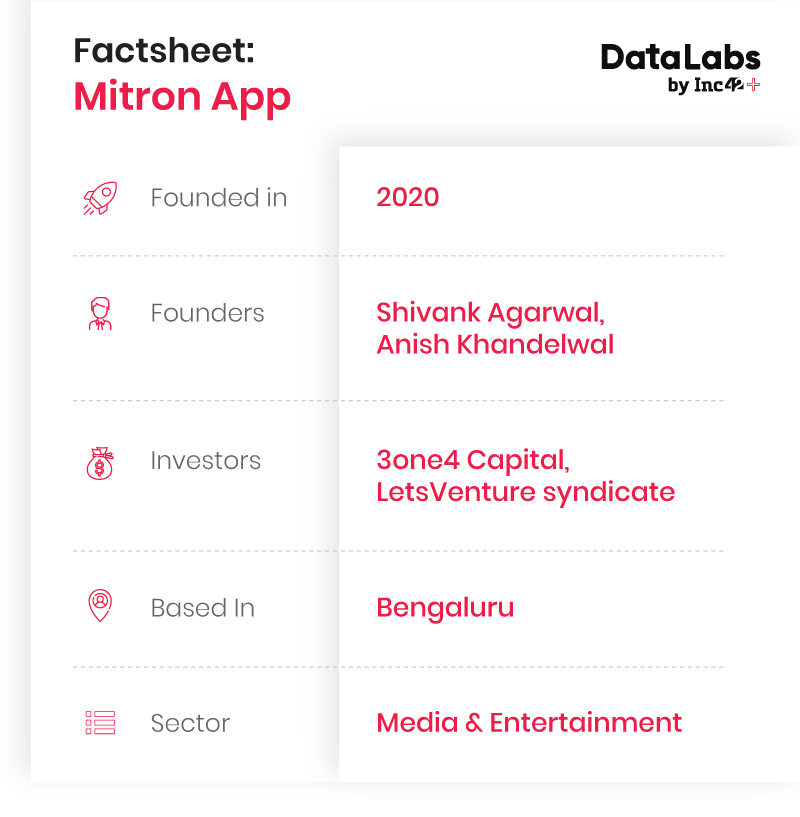 From Lows To Highs: 40 Mn Views Per Hour

All that drama aside, Mitron’s growth would colour any social media startup green with envy. There’s no doubt that a large part of this has to do with the ban on TikTok. Mitron — and others like Chingari and Trell — have benefited immensely from the ban.

Mitron averaged 2.5 Lakh videos uploaded per day before the ban. Since then, uploads have grown to 1 Mn+ every day. The 26 Mn downloads with a 17Mn monthly active users account for 40 Mn video views per hour today. In terms of user growth, more users are coming from Tier 2 and 3 cities, while the average time spent has gone up to at least 15 minutes every day. The growth has primarily come from users in Maharashtra, UP, Rajasthan and Karnataka.

The growth has been backed by the company’s scaled-up infrastructure, which is how Mitron was able to handle the increased momentum. After some downtime in the early days, the Mitron tech team moved its operations to Amazon Web Services (AWS) servers in Mumbai and learnt from its mistakes in the past to achieve and maintain scale without downtime challenges.

Currently, Mitron is a 10-member team split in Bengaluru, Chandigarh, Hyderabad and other locations. The team is mostly focused on product development. “Mindless marketing won’t lead you anywhere, so focus on product enhancement that will ensure our quality of service is good,” Agarwal added.

However, currently, the app’s UI/UX is yet to improve and the slow speed of video loading combined with technical glitches harm the user experience. We noted that some videos are attributed to the wrong users as well, and the profiles don’t seem to have the videos being promoted on the discovery page. This appeared to be the case for at least 10 user-profiles and videos.

The Investor Gold Rush For Mitron

After a tumultuous June, in July, Mitron announced that it has raised INR 2 Cr from 3one4 Capital and LetsVenture syndicate list led by Arun Tadanki. The plan is to use these funds to accelerate its product development roadmap, engage more deeply with a wide network of Indian content creators who are sharing videos on the app, and hire talent to scale the tech infrastructure and prepare for a larger user base with deeper engagement.

Speaking about the journey of fundraising and negotiating with investors, Agarwal said that he has been in touch with investors ever since product development began. The funding was confirmed but due diligence could not be completed sooner, which is why he waited till July for the announcement. He also noted that existing investors had bet on the vision of the founders and were impressed with the opportunity in this space. After the rocky opening, there has been a lot of inbound interest from investors, especially in the past few weeks.

Bringing Influencers To A New App

Mitron does not see itself confined to the Indian market. There are plans to take it global this quarter— July to September— the company is focused on getting users more comfortable with the app.

In the next quarter, it plans to enable search for videos. It is also expanding the languages portfolio, where it plans to have deep integration for 10 regional languages for audio as well. The company also plans to sign up influencers and brands on the platform to help them monetise at a later stage.

The vision is to expand the product across genres, and not only light-hearted comedy currently seen in the market but other categories. So monetisation is on the back burner for now and the first step is to give users what they want, which is why it is not a good experience to start with ads.

At the moment, the company has zero customer acquisition cost, as it hasn’t been running any marketing campaigns. But as it grows and brings influencers onboard, Agarwal expects that CAC to increase. “A lot of work has to be done in brand building, and not distracting users, so monetisation will happen after some time. We will work on enhancing user experience,” the cofounder added.

Despite the buzz around the new Indian clones of TikTok, building user-generated content (UGC) apps for India is no easy feat. And with at least 10-20 new contenders in the market, the competition is going to be fierce. And we haven’t even considered what happens if TikTok makes a re-entry.

Some industry experts have noted that the TikTok pretenders have only managed to copy about 20%-30% of TikTok, which has a much deeper ad integration and larger market presence.

Abhilash Inumella, founder and CEO of Samosa Labs, wrote in a post, “Launching a 20% TikTok isn’t going to cut with this set of audience who were already spending a couple of hours every day with TikTok. They instantly compare the clones to TikTok and come to a judgement on the product quality based on their own experience on the feed.”

He also noted that TikTok clones cannot clone its algorithm, the camera features which takes big money to build or their talent management infrastructure. “That leaves two possibilities: launching a new product and driving traffic to it or doing the really hard work of fixing the core algorithm,” he added.

Inumella’s product Samosa Labs has been in competition with TikTok for two years, after which it shut shop in 2019, as per his LinkedIn profile.

So given these comments, one could be slightly sceptical about the buzz and whether it will last long enough for Mitron and their likes to actually have as large an impact as TikTok has had. Nevertheless many are trying. New entrants such as ShareChat’s Moj, Instagram Reels, Gaana HotSpots, Zee5 HiPi will make it hard for Mitron and its ilk.