2020 In Review: Startups That Troubled Customers This Year

2020 In Review: Startups That Troubled Customers This Year 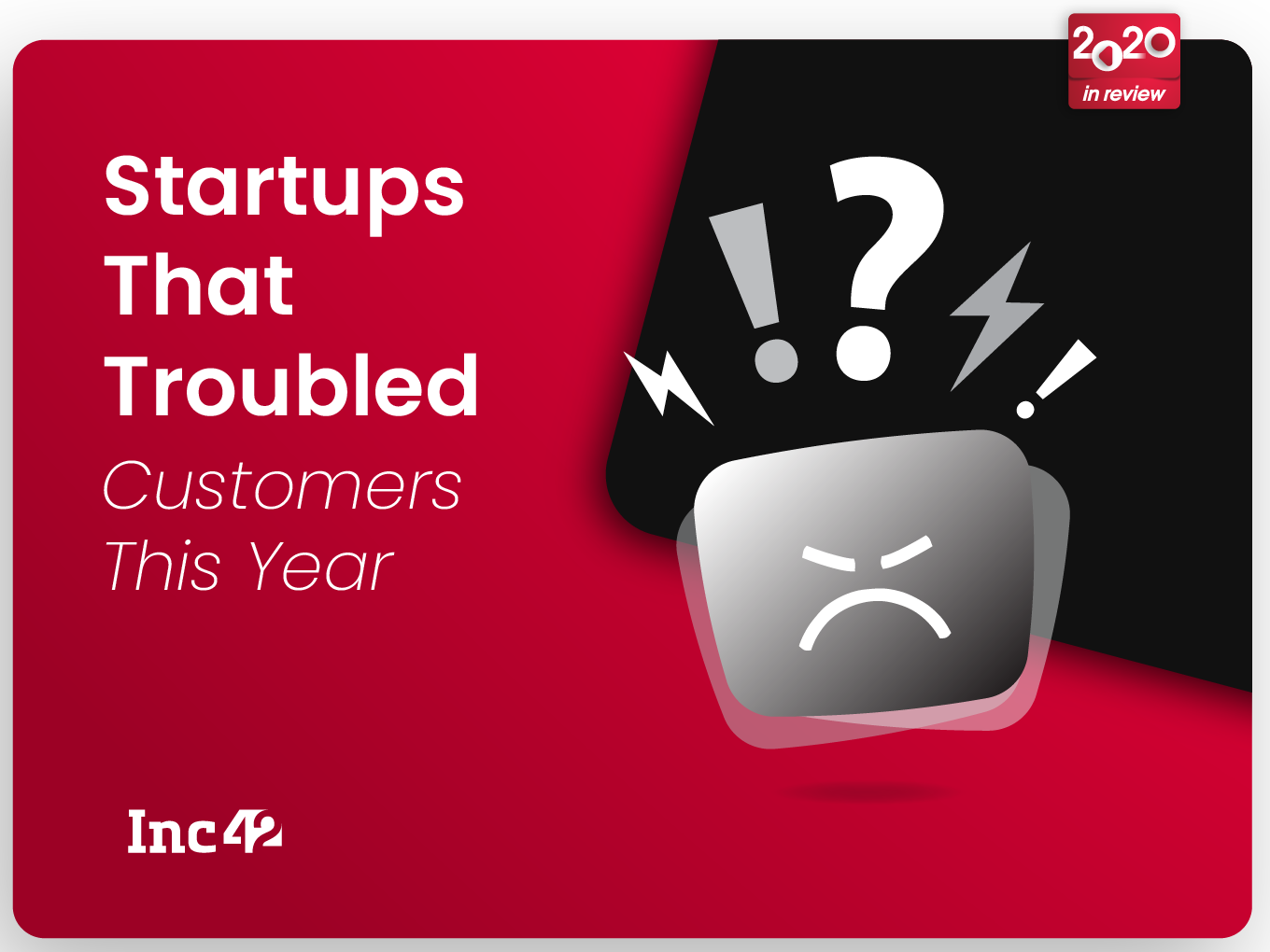 Several startups in travel and mobility segment found themselves with heavy refunds claims, even as their cash flow dried up

WhiteHat Jr too was surrounded by customer-related controversies, though it was shadowed by other issues the company faced

As everything came to a halt and customers jumped in to cancel all their bookings, several startups were left with heaps of refunds requests but with zero cash flow to make up for it. We bring the latest edition of ‘Year In Review’ to walk you through the customer-related crisis that startups had to face in 2020.

As the pandemic hit India hard, consumers also had to adjust to a new reality and all plans came to a halt with the lockdown. Flights, hotel bookings and vehicle rentals canceled — many businesses suddenly found themselves under a mountain of overwhelming amounts of refund requests with almost zero cash flow.

While one way made the company ensure its survival, the other maintained the goodwill of the company while risking the entire setup. The choice wasn’t as simple, especially amidst the descent among the customers eagerly awaiting their dues. Some companies did manage the crisis well, for others, it just got out of hand.

It is important to note that the Covid-induced crisis wasn’t the only reason for customer grievances against companies this year — but it was definitely a cause for concern for many of the startups. We also saw companies wading into hot waters with their stance on political issues as well as a few complaints about edtech products that made the headlines this year.

Three months into the lockdown, several Zoomcar riders took to social media platforms like Twitter, LinkedIn to talk about their grievance against the company. It had been more than 15, 30 and, in some cases, 60 days since the company had not issued refunds for canceled bookings.

To make matters worse, there were no concrete answers from the company. “We agree with your distress regarding the delay in getting a refund. Please be assured, our team has been working on this, we will ensure the refund is processed as soon as possible. We are requesting your patience in the interim.,” the company’s Twitter handle would respond to all tweets with keywords “Zoomcar” and “refunds”.

Some customers even took the matter into their own hands and reached out to founder and CEO Greg Moran, but there was no response from that side either. All their grievances fell on deaf ears. In response to Inc42’s queries, Moran said that he was not aware of any such issue or allegations made against the company. Even though social media was filled with customers’ anger.

But there is no denying that the company was going through a tough time as well as their core offering came to a halt with no sign of recovery. According to sources within the company, Zoomcar decided to keep their employees on board and delay the refunds for the time being.

“I decided to vacate the house this June after the lockdown was lifted. After I raised a request to vacate on the app, it mentioned that I would be paid back deposit refunds of INR 25,000 without deductions within 7 days, but this entire information was deleted from the dashboard the day after I moved out and I’m yet to receive any money,” Siddhant Garg, a Bengaluru-based software engineer, told the Mint earlier in July.

This is just one of many claims NestAway was surrounded by July 2020. The lockdown and travel restrictions were recently lifted, work-from-home was instituted for another couple of months at least. There was no sign of a return to normalcy, so the migrated workforce did the most logical thing — vacate their rented properties.

This rise in reverse migration has impacted almost all startups operating in the rental space, but things got out of control for NestAway. Several customers moved consumer court alleging fraud and extortion against the company due to non-payment of their refundable security deposits. Some also took to social media to highlight their grievances and organized themselves in apps like Telegram.

In June, NestAway spokesperson said that the startups have witnessed a surge in move-out cases in the last 2-3 months, and has solved claims of about 3000 cases.

As all traveling plans came to a halt with national and global lockdowns, online travel agencies (OTA) like MakeMyTrip, Yatra.com and EaseMyTrip found themselves in the muck of refunds even though they were just an enabler of travel bookings and not the sellers themselves. The platforms were the first to face the pent up anger of the customers as airlines delayed payments.

But what could airlines do, they too were sounded by multiple-crore payments as the world came to a standstill. According to media reports, additional tickets worth INR 180 Cr were booked in the first 9 days of lockdown, between March 25 to May 3, across all private air carriers. Indigo contributed to almost 50% of tickets worth INR 90 to 95 Cr.

The Indian government has been aggressively pushing for financial inclusion, creating a larger scope for new-age digital lenders known for their easy-and-breezy loan approval process. Even before the segment could take off completely, it has witnessed some problematic issues that need to be dealt with on an urgent basis.

At least five people are known to have committed suicide in recent months, allegedly due to the harsh loan recovery methods employed by these digital lending platforms. One victim of this alleged harassment was Abhishek Makwana, a writer of the popular Hindi sitcom ‘Taarak Mehta Ka Ooltah Chashma’, who died by suicide on November 27.

Irrespective of the loan size, the story of harassment remains the same. It starts with polite reminders but turns into harassment, abuses of the customers and their relatives even. Few customers Inc42+ spoke to have named the Red Carpet app, among others, to have carried out such tactics.

In one of the incidents, the Red Carpet app sent threatening and abusive messages to a customer’s fiancee and her father which resulted in a broken marriage even before it could happen.

WhiteHat Jr is easily the most talked-about startup in India at the moment. Founded only two years ago, WhiteHat Jr already has achieved a run rate of $150 Mn, a subscriber base of 4.2 Mn users across the globe and a takeover from the world’s most valued edtech startup BYJU’S. However, the year has also been filled with controversies for this edtech startup.

The company’s advertising strategies and aggressive takedown of critics has been one of the most controversial aspects, hands down. People may argue that these issues were majorly raised by non-customers and critics on social media, who never actually attended their paid sessions. But the controversies have definitely impacted the company’s users as well.

WhiteHat Jr’s online reputation management (ORM) team’s internal communications came public, thanks to software engineer Pradeep Poonia. These chats highlighted how the coding for kids startups would suppress the voice of its customers giving genuine reviews about the product.

One of the customers had also reached out to the company’s CEO Karan Bajaj highlighting their grievances, however instead of solving it, the customer was offered four free classes instead.

‘To be or not to be politically correct’ is a dilemma many businesses face, but very few have the stomach to actually do it. In times when being vocal about political opinion leads to #boycott campaigns, negative reviews and a hell-lot of trolling, food aggregator businesses Zomato and Swiggy decided to troll the trolls with their satirical tweets and upfront approach.

For Zomato it actually started last year, when a customer complained to Zomato about how he didn’t want to be served by a Muslim delivery executive. The food delivery business decided to not let it slide under the carpet and replied “food is not a religion, it is a religion”.

Since then, Zomato has not been one of the favorite brands for right-wingers. The Deepinder Goyal-led company has left no opportunity to make its views on equity pretty clear, and call out the bigotry. The company even ensured that they will look into their advertising strategies when asked about their ads running on Republic TV. Hence, this leads to another #BoycottZomato trend on Twitter.

Used to Zomato’s ‘liberal’ stance, soon customers were left shocked by Swiggy’s smug statement that won the hearts of many. A satirical tweet from finance minister Nirmala Sitharaman’s parody account read, “Had an argument with my Bhakt friend over a farmers protest. He said that we are not dependent on farmers for food. We can always order food from Swiggy. He won.” Soon the company jumped into the scene with their “Sorry we don’t refund education” statement.